Jötnar of Sturgia adds a new race of troops to the Sturgian Principality, the troop tree consists of a total of 15 troops spread across tiers 2-6, as well as a new clan, and associated settlements. The goal was to incorporate giants (Jötnar plural, Jötunn singular), from Norse mythology in as lore friendly a way as possible - by building off of the fact that the Nordic people are referenced in the game, and Raganvad's mother is a Nordic princess.

Posted by ThisIsSovereign on May 6th, 2020

The Jötnar, commonly referred to by citizens of the Calradian Empire as Giants are an ancient race from the far North. Their home is a land of eternal winter called Jötunheimr, which is located to the North of the Nordic lands beyond nigh impassable mountains. They are known for their towering stature, being roughly 2-3 times the size of a man grown. While the Jötnar have not been seen in Calradia in recent times, word has spread of the turmoil of the land to Jötunheimr by way of Sturgia's Grand Prince Raganvad's mother - a Nordic princess. Intrigued at the thought of battle with the feeble southerners, she was able to secure for Raganvad their support in his war against the Empire of Calradia - prime among them being a clan known as the Sons of Fenrir led by the fearsome Valdyr.

Jötnar of Sturgia adds a new race of troops to the Sturgian Principality, the troop tree consists of a total of 15 troops spread across tiers 2-6, as well as a new clan, and associated settlements. The goal was to incorporate giants (Jötnar plural, Jötunn singular), from Norse mythology in as lore friendly a way as possible - by building off of the fact that the Nordic people are referenced in the game, and Raganvad's mother is a Nordic princess. These troops are intended to be slightly uncommon, somewhat in the vein of noble troops in Vanilla. By default 20% of Sturgian Recruits are replaced with Jötunn Recruits, this maps to the branching higher tiers. The mod comes with three separate modules, all three provide the full effect of the mod and at least two are required: 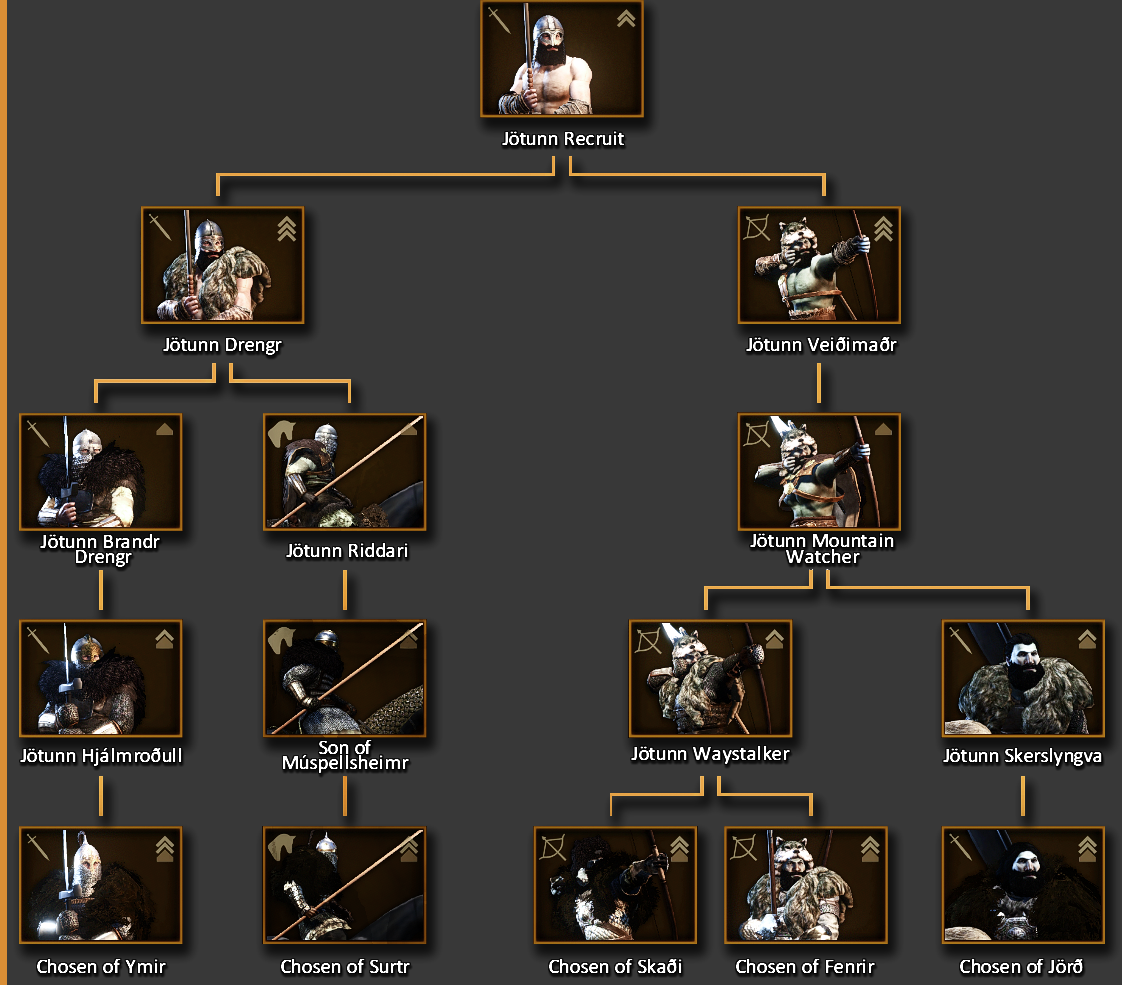 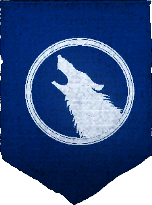 The Sons of Fenrir are a clan of Jötnar from the far North beyond Sturgia and the Nordic lands. Fenrir, their namesake, is an ancient Jötunn - an evergrowing wolf whom it is said almost no chains could hold. It is in this way that the Sons of Fenrir fight - as ferocious, unbridled wolves.

Valdyr is the head of the Sons of Fenrir, he was the first Jötunn to jump at Raganvad's offer to fight alongside him against the southerners, and also brought a sizable host of Jötnar with him including his fellow clan members. It is for these reasons he was granted the fief of Fjall, a town near the Northern most tip of Calradia. Valdyr is known for his brutality - he takes great pleasure in crushing southerners beneath his massive great axe Myrkr Dagan on and off the battlefield. Myrkr Dagan, meaning dark dawn in the modern Calradian tongue, is a great axe so sharp it can render any form of defense pointless - especially when combined with Valdyr's unimaginable strength. It is also said his palate includes human flesh, and that after a battle he can be found feasting on those unfortunate enough to not have perished.

Svíkja is Valydr's older brother, the head of the Sons of Fenrir. He arrived in Calradia at the same time as Valdyr, making the initial trip from Jötunheimr with him to meet with Raganvad. He is every bit as cruel and as capable a warrior as his brother, yet he does not command the same respect nor possess the same ability to lead his fellow Jötnar - a fact which irks him to no end. The root of this lies in what occurred after the brothers' father, the then head of the Sons of Fenrir, died. Svíkja being the elder brother, would usually be the next in the line of succession - however Valdyr challenged him to single combat to decide who would become the head of the clan, a challenge which he readily accepted. Needless to say, Svíkja lost, and not only that - he lost his right eye to Valdyr's great axe Myrkr Dagan. In battle he fights with a titanic two-handed sword which he could easily swing with one hand, and still be able to effortlessly sever the heads of half a dozen men grown with one sweep. Some says Valdyr need be wary of Svíkja, for he envies what he has - but the question is would the Sons of Fenrir be willing to follow Svíkja if he made a claim? Doubtful.

Samna is Valdyr's wife, and fittingly enough she is just as merciless in battle against the southerners as he is albeit with one caveat - she doesn't partake in the consumption of human flesh as she can't stomach putting that filth into her mouth. Her fighting style is focused around the use of her long bow in the vein of Skaði, so big is it that it would take half a dozen humans just to muster enough strength to pull back it's string - let alone properly loose an arrow from it. It is from this bow that she looses arrows which approach the size of man made javelins, capable of penetrating multiple humans if they were foolish enough to stand too close together.

Sker is the adopted son of Valdyr, whom often views him as a disappointment - mainly due to the fact that he turned out nothing like he had hoped. Sker was adopted by Valdyr when he was only a baby, and he had hopes that he would grow up to enjoy partaking in the same things he did. But as it turns out, Sker is quite gentle and prefers to avoid conflict, even so he is so dull that he doesn't fully comprehend how sadistic his adopted father actually is - his only saving grace in Valdyr's eyes. It is in this way that Valdyr has convinced Sker to join him in playing with the southerners - also known as breaking every bone in their body with the enormous boulders he throws with such velocity that no shield or armor could protect one from the sheer blunt force of the impact. Sker is possibly one of the largest Jötunn that walks Calradia in present day, and due to this when you see him from afar you might get the impression that he is throwing pebbles at you - but once that pebble gets closer, when you're seconds away from drawing your last breath - you'll quickly realize just how wrong you were.

The troops are intended to be somewhat similar to Noble troops in terms of power and scarcity - the tree starts at Tier 2 and goes to Tier 6, and have a higher stat total than Commoner troops. Knowing this, when determining stats for each troop I looked at similar role Noble troops stat totals, and stat maxes. For example the Tier 4 Sturgian Noble Troop Varyag Veteran, has a stat total of 530, with its main offense stat of One Handed being 150, main movement stat being 110 etc. I balanced the troops by looking at stats in this way, as well as looking at what equipment the troops have.

20% of Sturgian Recruits are replaced with Jötunn Recruits, and this maps to the branching higher tier troops. The intent is for them to be present, but to be more scarce then regular Sturgian troops - which also fits in that there are considerably more humans than Jötnar in Sturgia.

The troops were added to Sturgian Lords' default party model by replacing ~20% of Sturgian troops with same role and tier Jötnar troops - this worked out to 11/55 troops in the model. This way you will see Jötnar represented in Sturgian armies, proportionate to how many are living in Sturgia compared to humans.

Jötnar of Sturgia - Sons of Fenrir
This module is not compatible with any mod that adds. Currently, when adding new settlements to Bannerlord you have to replace the entire settlements.xml and Main_map/scene.xscene files in order to add anything to them.

When viewing the 3D model of the troops in the Encyclopedia or Party Screen all you will see is the lower half of their body. This is because the troops are much taller than the Vanilla human ones which the displays are designed for. I tried to edit the .xml file for these menus to see if I could zoom out or scale the display, as well as looked into potentially changing it via a .dll module but I can't figure out how to do this. If someone finds out/knows how to please let me know (I spent a whole day trying to fix this ugh).

The only way to scale troops to be this large right now was to change the scale of an entire sex/age combination as the height setting is hard capped currently. In this case I chose male teenager and female teenager and replaced all of their meshes etc with the adult versions, and set all of the troops to be within the teenager age range. This shouldn't really be much of an issue as I've played the game for 200+ hours and haven't seen many teenagers, but if you do see one just think, "It's a Jötunn." One place you will see oddities is character creation as it shows your character at different ages, but that's negligible.