Another update for Frontier. We're closing in on the first beta release, people! Soon!

Right. First things first. The long-anticipated first beta release of Frontier is expected during Q1. Each and every day, I'm working hard at getting it beta-ready. The first beta will be only the landmass mostly done; empty of NPC's and quests. I say mostly done, because I'm actually leaving some areas to later when I do the quests. The first beta will be published in the hope that I'll get many people running around the continent, finding floaters, submitting comments and suggestions and showing support for the mod.

In the meantime, keep checking my development blog for the latest and here are some screenies for you too! Stay strong, people! 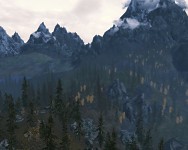 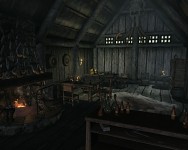 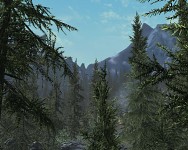 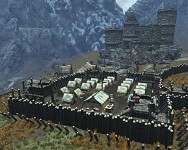 Looking forward to the first beta!When you say empty of NPCs ,you mean including the creatures and animals as well?It would be nice to have something to kill while wandering around ;)

The thing is that all the NPC's as well as animals and monsters need NavMesh, and that's something I will add to the continent as I start adding those living things as well as the quests. The NavMesh will take a lot of work. There will be some animals just standing about though in the early beta.

You could generate navMesh quickly and easily.I tried it and I had no problem.Of course sometimes it needs to be optimized for the best result.
I've added a werewolf to a new worldspace without NavMesh and it was just staring at me :p

No clue if this is where this project might be going but it would be nice to play a "majesty" clone via Skyrim. :)