Talking about designing the final area of IWBTFG, and the challenges that finishing a game like this brings.

The release date for the game is less than a month away, and we actually think we're going to make it!

Right now, we're working on the final screen in the game before the last boss. Throughout the entire development we've been shifting and changing levels in a pretty haphazard order, but we're now confident that the paths are pretty much done, and the real bulk of the game is finished and ready for release. There's going to be a lot of changing and testing to come, but now that we've just about finished every frame, it's a massive milestone.

Now that we've come so far in game development and level design skills from the start, we wanted to make the ending something really special. We know that pretty much everything before this from the start has been building to this huge climax of "Finally beating that damn game", so we wanted to give this final pre-boss screen a feel of scope and completion. 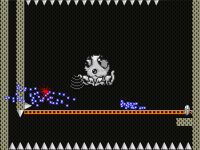 Tij came up with the great idea of incorporating a bunch of things from earlier levels, and we constructed it to have as many references and objects from past levels as possible. 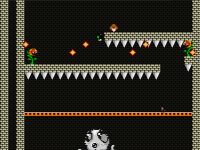 It's not Meant to be easy!


We've tried to give it a feel of accomplishment. You've beaten all these things before and seeing them again gives some scope to the accomplishment so far.


Personally, the re-appearance of the chest (One of my favorite screen in the game) is, I think, a great example of how the feeling works. A lot of people got frustrated with the chest because it's a problem that looks really hard that has a deceptively easy solution. Seeing it again at the end, you can use what you already know the make the mini-encounter trivial. To someone seeing this as the first screen in the game, it would be insanely hard, but to someone that reaches it after the course of the rest of the game, the challenges are recognizable and thus beatable. 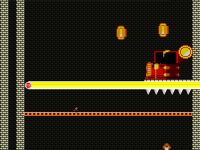 Until a stop sign shoots a lazer at you, that is.


At any rate, we're very happy to be finishing the game up. It's been a long time in the making and we're really proud of what we have so far. Most of the work here on will be watching playtesters work their way through the game and smoothing out the difficulty curve. Or maybe we'll just rough it up a bit more. Who knows!
Oh, and there are a few more (Totaling to about 16 now!) secret items going in. We're making sure that beating this game to full completion is going to be a truly epic task. Good luck!


IT'S THE MOST KAMIKASE GAME EVER!!!

You haven't even seen the Bats Screen yet!

i never read comments full of SO MUCH joy ever before

Bats make a dramatic apperance near the end. You will both love and hate them. I can almost garuntee that, regardless of who you are, if you play the game, you'll say the words "******* Bats!" at least once.

how can i beta test it?

At the moment, the beta testing of the curent build is limited to the devs and some close friends. Soon we're going to start getting some proper, supervised playtesting sessions going on to tweak the game up, but as for the public of the internet, no dice.

What you CAN do, however, is download and try out the Beta v3 that We've put up here, then send me or Tij a PM or email etc telling us what you think of it, and what you would like changed, and we'll see what we can do.

Fan input is ALWAYS a good thing for us. We really appreciate it.

i already finish it and made a complete video guide in spanish :P

thats why im interested on testing it ^^, and make another video guide when the complete game finish

Wow, that's awesome! I'm really glad you liked the game, and your playthough makes me with I spoke Spanish!
If we ever end up giving out Beta versions to people outside our current Playtesting Group, I'll definatley send one to you. Given how close the final release is though, it might not happen.

I think I saw that a while ago... against glados, the spanish cursing was funny as.