The maps logic building is going well. After garbage, I added logic for Escape map.
Keep in mind it's the main story logic, the bare minimum to play the mod right now. So I wrote a bunch of dialogs, spawns and scripts and now I am down to one map left.

On a general note I am still on the fence about the ending of the mod. I don't know if I let the game run as a free play, or if I end it after what I want to be the final moment. As each and every Stalker player I never want to leave the zone, and free play is always welcome. But in the other hand, free play is always disappointing and kind of sad, because you wander with no purpose and you really have this feel of a party being over, and you trying to hype the memory of what you did there.
I had this crazy idea about the ending of the mod being in fact the trigger to a second part with a brand new story, it will really depend on the time it takes to get the first part done.

What is being worked at this very moment ?
The last map I have to rework and add logic to is Lost Valley. It's in fact the first map I ever built for this mod, and now I am not very pleased with the way it looks.
So in addition to the logic and spawn task, I started with a massive overhaul. Of course it will take more time than just adding logic, but it worth the effort.
First, it was too big. It has some empty areas that bring nothing to the gameplay and I decided to cut into that. So I restricted the playable part, and removed part of the terrain.
I want this map to be a great start to the mod, so I am updating the assets and changing a bit the scenery. I am adding a pine forest and I wanted to use brand new trees. So I built a couple of pines with some variations, and now I am in the testing phase.
The screenshots above are from my test map, where I assembled most of this new forest elements. It looks promising, and I am sure this will give Lost Valley a much better atmosphere. Of course it will not cover the entire map, so the contrast between wide open field and a busy forest should be enjoyable.

Once this last map rework is done, well there is only minor tasks left before I can have a full view of the mod.
So after the current Lost Valley pass is finished, I'll add all level changers, compile all spawns and hopefully start testing the gameplay in full scale. 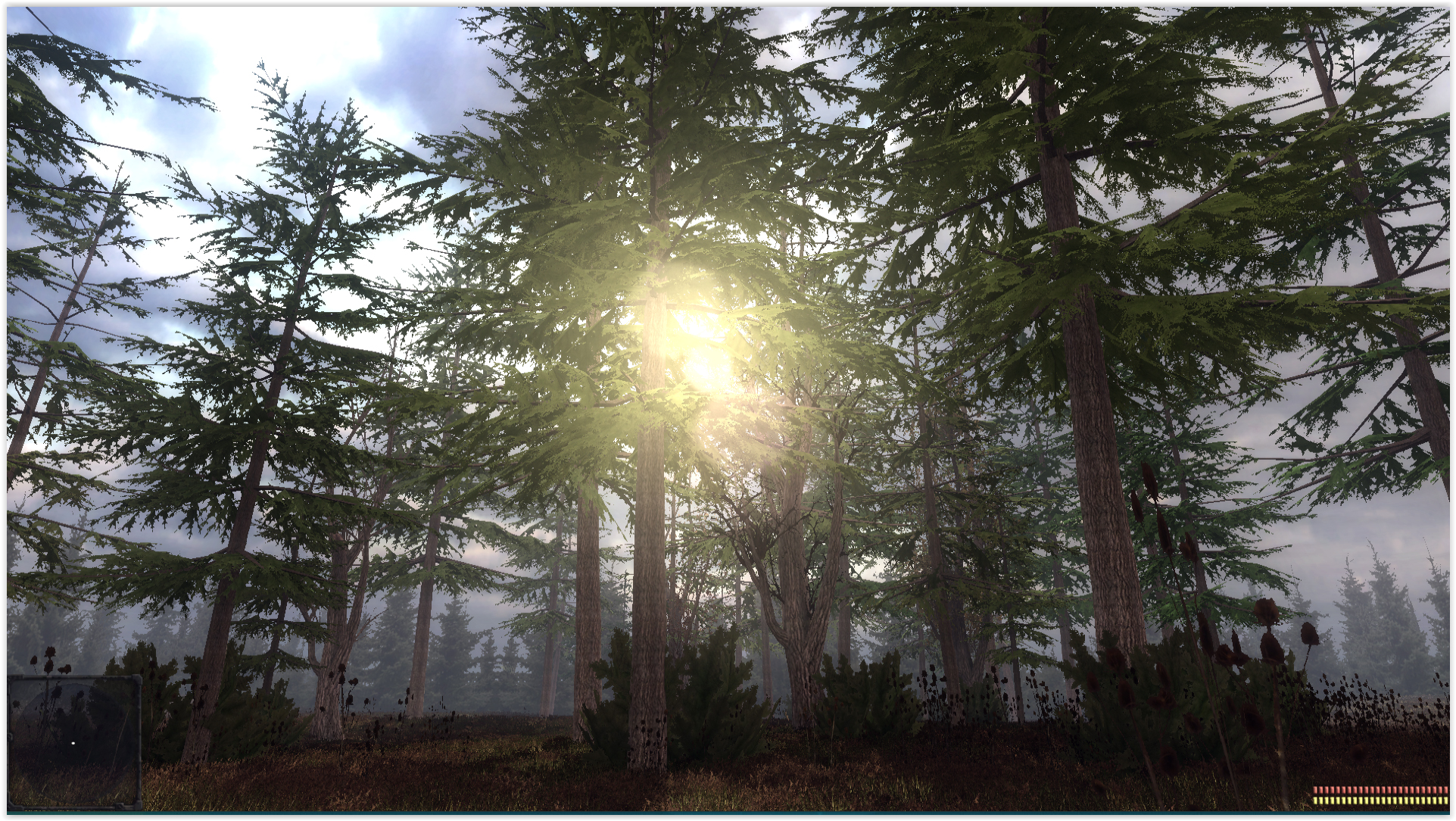 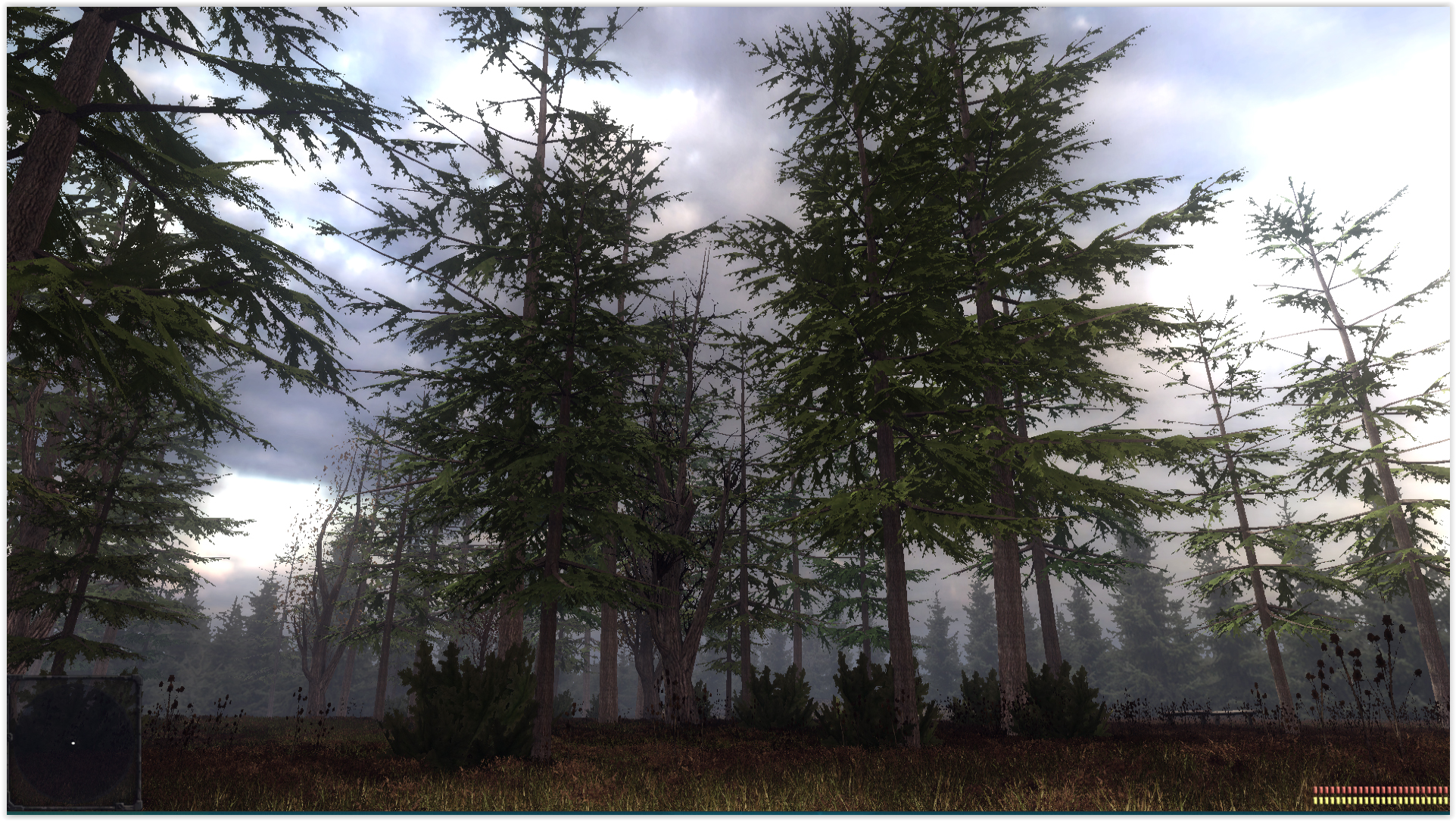 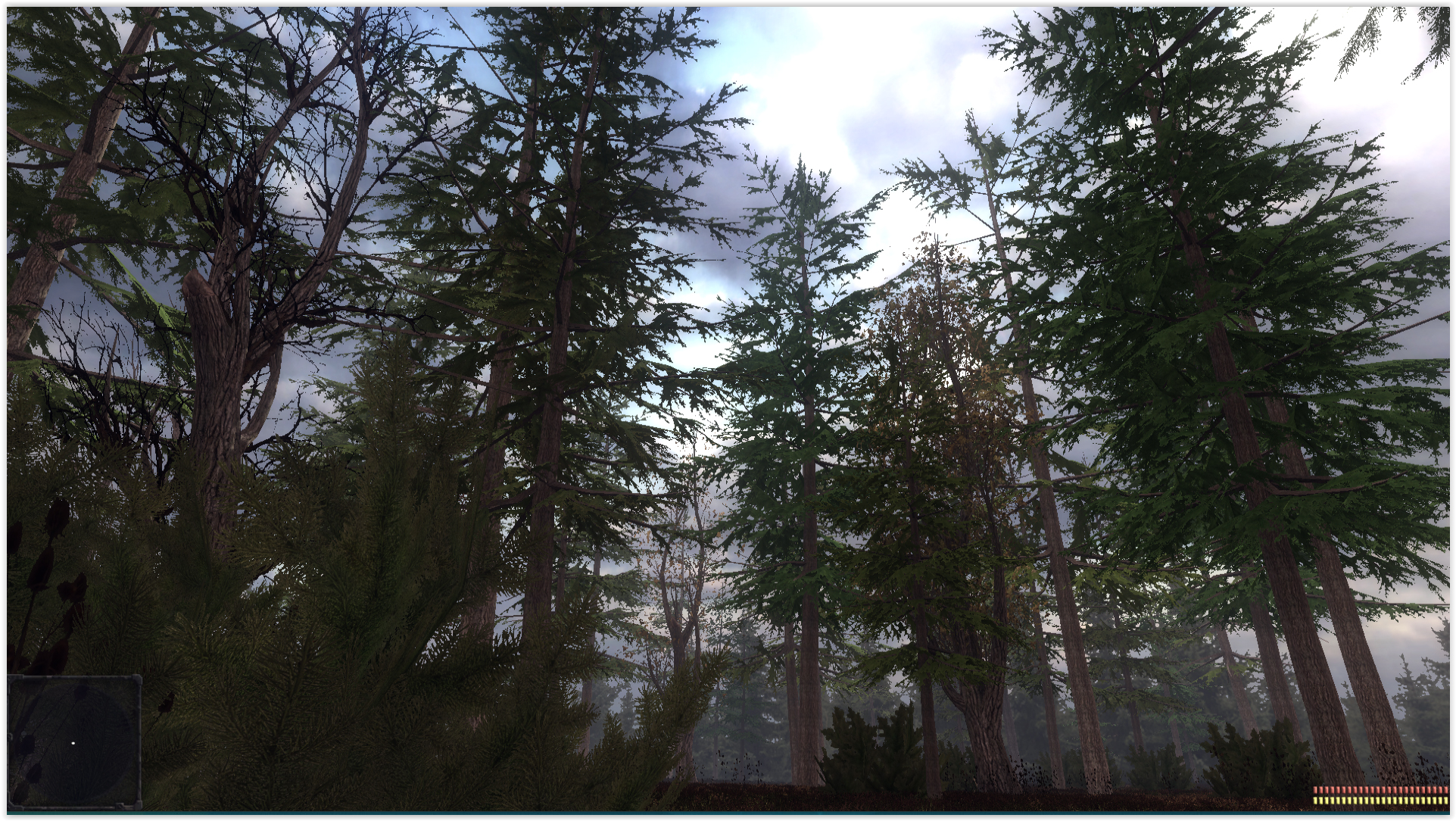 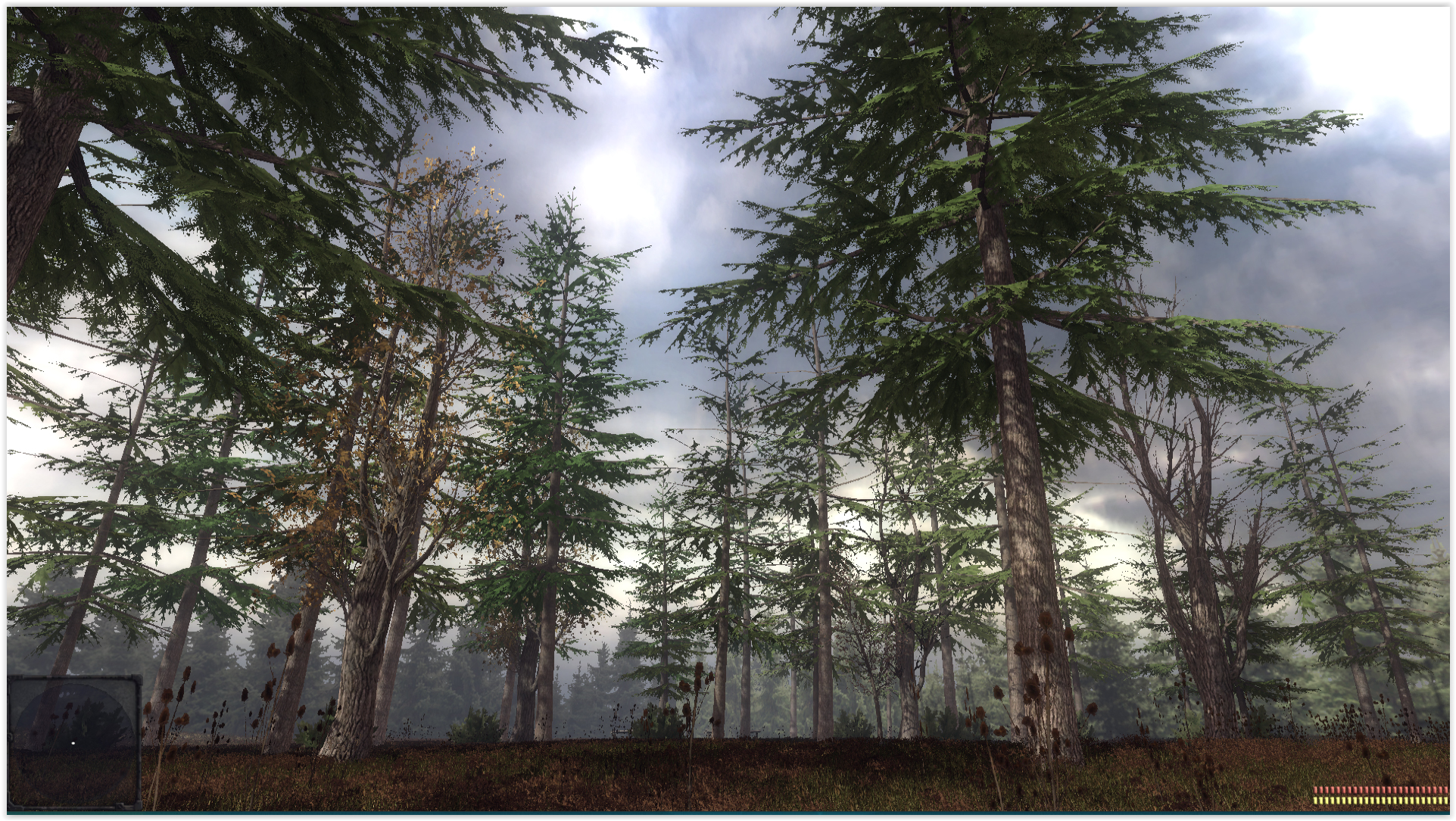 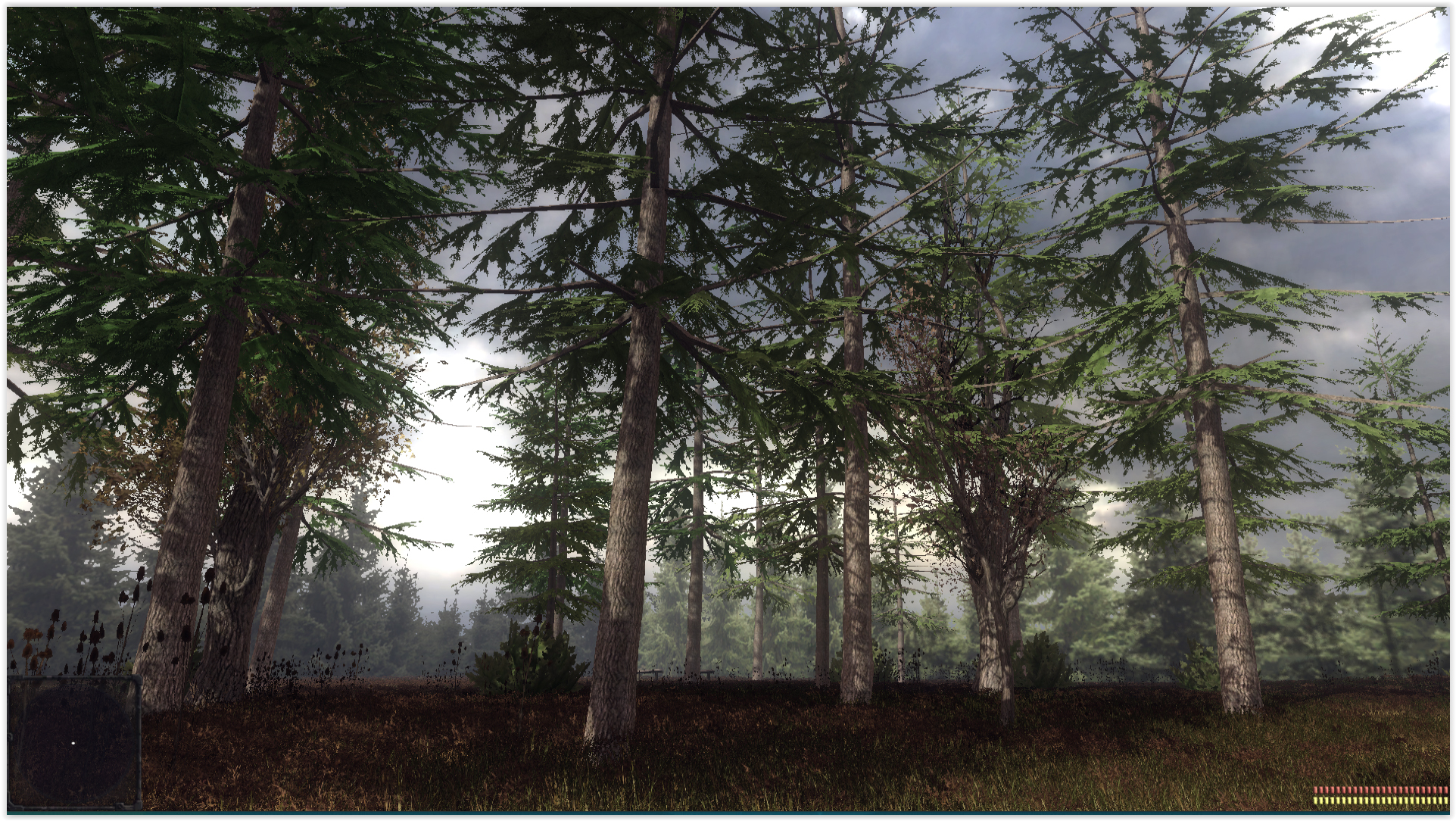 Things are shaping up nicely, the end goal is slowly approaching, great work.

As for the freeplay, I say, if you decide not to include a second post game story, cut it entirely. There are loads of freeplay mods for Stalker and if you are making a story mod, once the story ends there is nothing else left to do but to wander in an empty Zone, like you said.

Very exciting stuff! I think trimming maps is good, sometimes I'm afraid I've missed something when there's a lot of space but nothing to find.

In my opinion, if you want to include freeroam at the end, you should change the world reflect the ending; NPCs have new dialogue talking about the ending, locations are changed as a result of your actions, etc, similar to New Vegas's "Functional Post-Game Ending." In that way, you can go back and see how you changed the world after the end of the story without writing a new second part.

Fantastic news and those map shots are shaping up quite nicely.

As for the freeplay thing, I know exactly what you mean with the player having a sense of emptiness with no real goals. I would probably say don't include a Freeplay since other mods do that quite well such as CoC and Anomaly and I would instead focus on making the story the best it can be. For me personally when I beat a mod like this or even the original STALKER games I'm not looking to jump back in, I sit back proud of my accomplishments and am satisfied I beat the game but this is just me.

Just keep in mind, MODDB is full of unfinished projects, in other words: Don't announce too early my friend.

"I had this crazy idea about the ending of the mod being in fact the trigger to a second part with a brand new story, it will really depend on the time it takes to get the first part done."

You could add that second part after the release of the mod.