We look at four of the many weapons you'll see in Isonzo, from the Beretta 1915 pistol to the unusual Villar Perosa machine gun.

Welcome to the third Isonzo Intel blog! Today is all about weapons - there will be a range of new firearms as well as some returning classics. We’re especially excited about bringing the Italian army’s arsenal to life! Isonzo will include a wide range of weaponry from pistols, sniper rifles and melee weapons to mortars and heavy machine guns. We’re sharing four weapons with you today, starting with a name that you’ll likely be familiar with...

This pistol was the first semi-automatic produced by Beretta, and the design is broadly similar to modern versions like the Beretta M9 used by the US Army. The Royal Italian Army found itself in great need of more pistols when it entered WW1 in May 1915, and as such the Beretta 1915 was adopted by the Italians the moment the design was patented in June 1915. Around 15,000 were manufactured during the war, with another 56,000 of an improved 1917 design being produced. 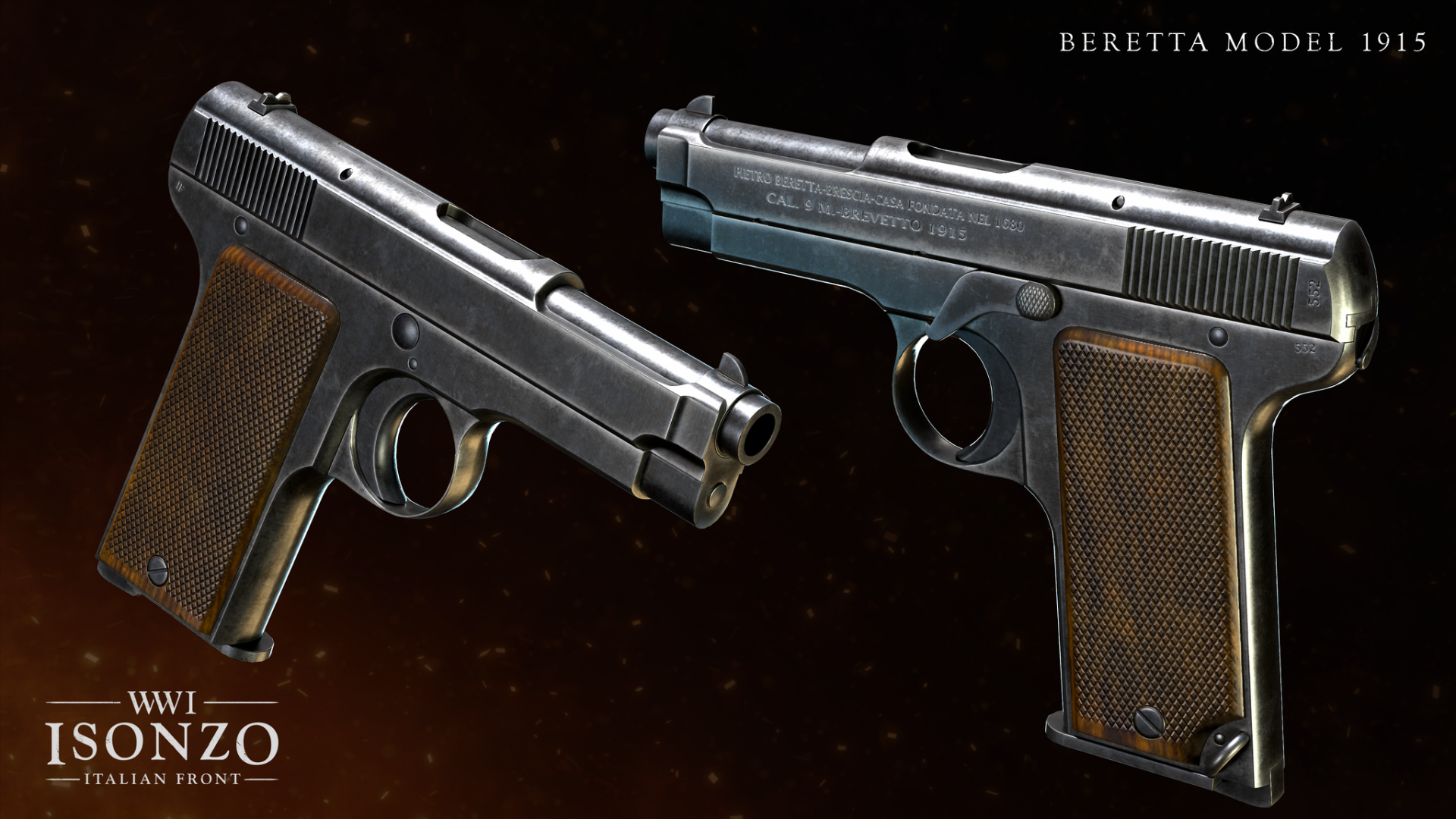 One interesting quirk of the Beretta 1915 is the double manual safeties. There is a slide stop safety on the left of the frame, and a lever at the back of the frame. Both need to be disengaged for the pistol to fire. The rear safety was removed in the 1917 variant, along with other changes that made it lighter, smaller, and simpler.

The highly unusual Villar Perosa started out as an air-to-air weapon, to be operated by observers or other secondary crew in aircraft. The high rate of fire and double barrel setup are a direct result of this original purpose, being designed for frenetic aerial combat where you might only have a moment to pour as much lead into your target as possible. It’s actually two complete gun mechanisms coupled together! 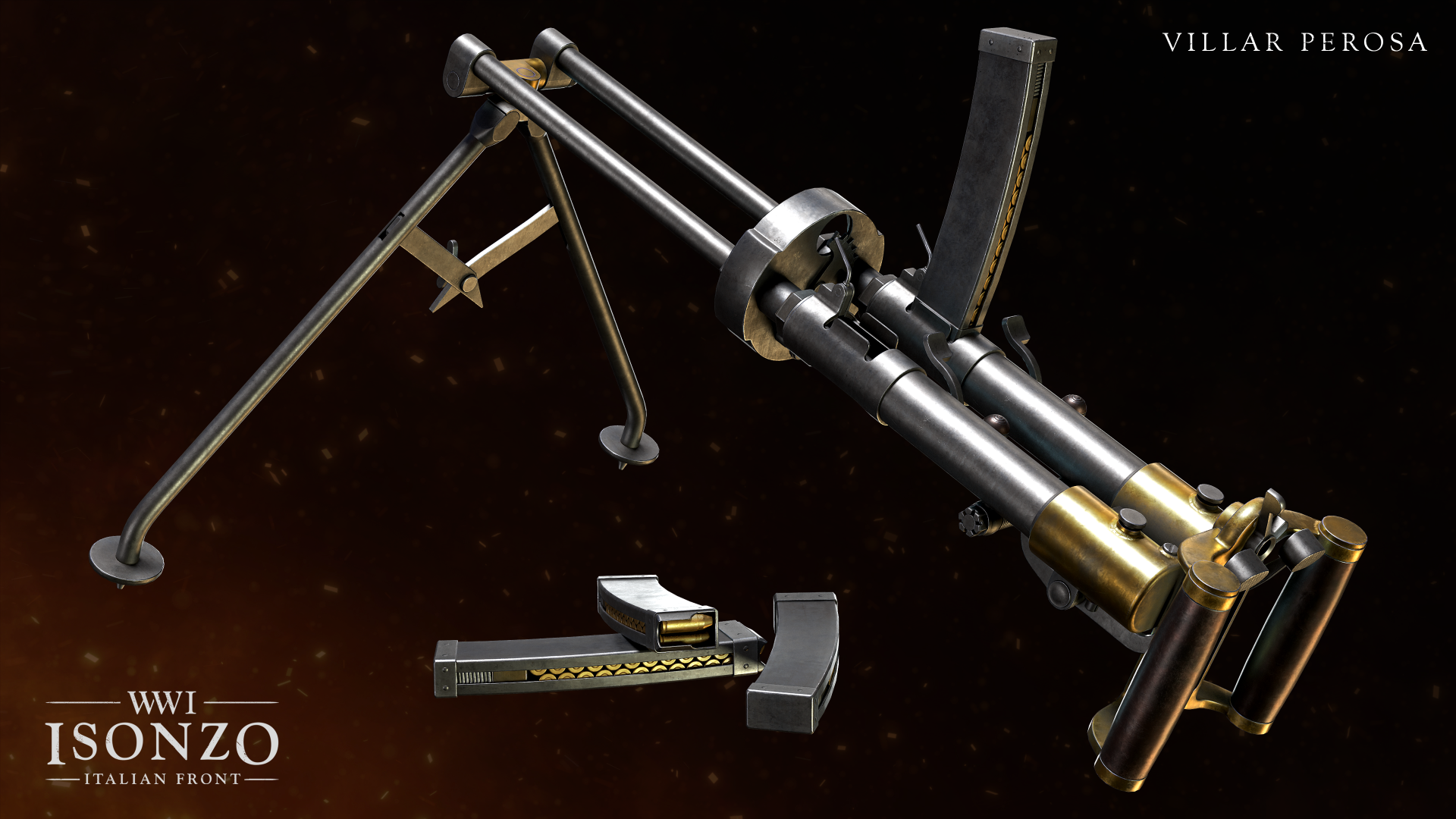 However, the 9mm rounds used by the Villar Perosa lacked range and stopping power in the air. Even early-war biplanes weren’t as flimsy as they might look, and rapidly progressing aircraft technology made newer planes increasingly resilient. Of course, the Villar Perosa went on to find a new home with the Italian Army.

In ground combat it could be deployed with a bipod and optional gun shield, and though the high fire rate required some discipline from the gunner, it was found to be very effective at shorter ranges. Despite the unusual design and being fairly heavy to carry, the number of Villar Perosas issued to Italian infantry increased over time.

The Rast & Gasser Model 1898 was an Austro-Hungarian service revolver, produced by an Austrian firm based in Vienna. It was a well made and reliable firearm, but some of the design choices were already outdated when the gun was first put into production. 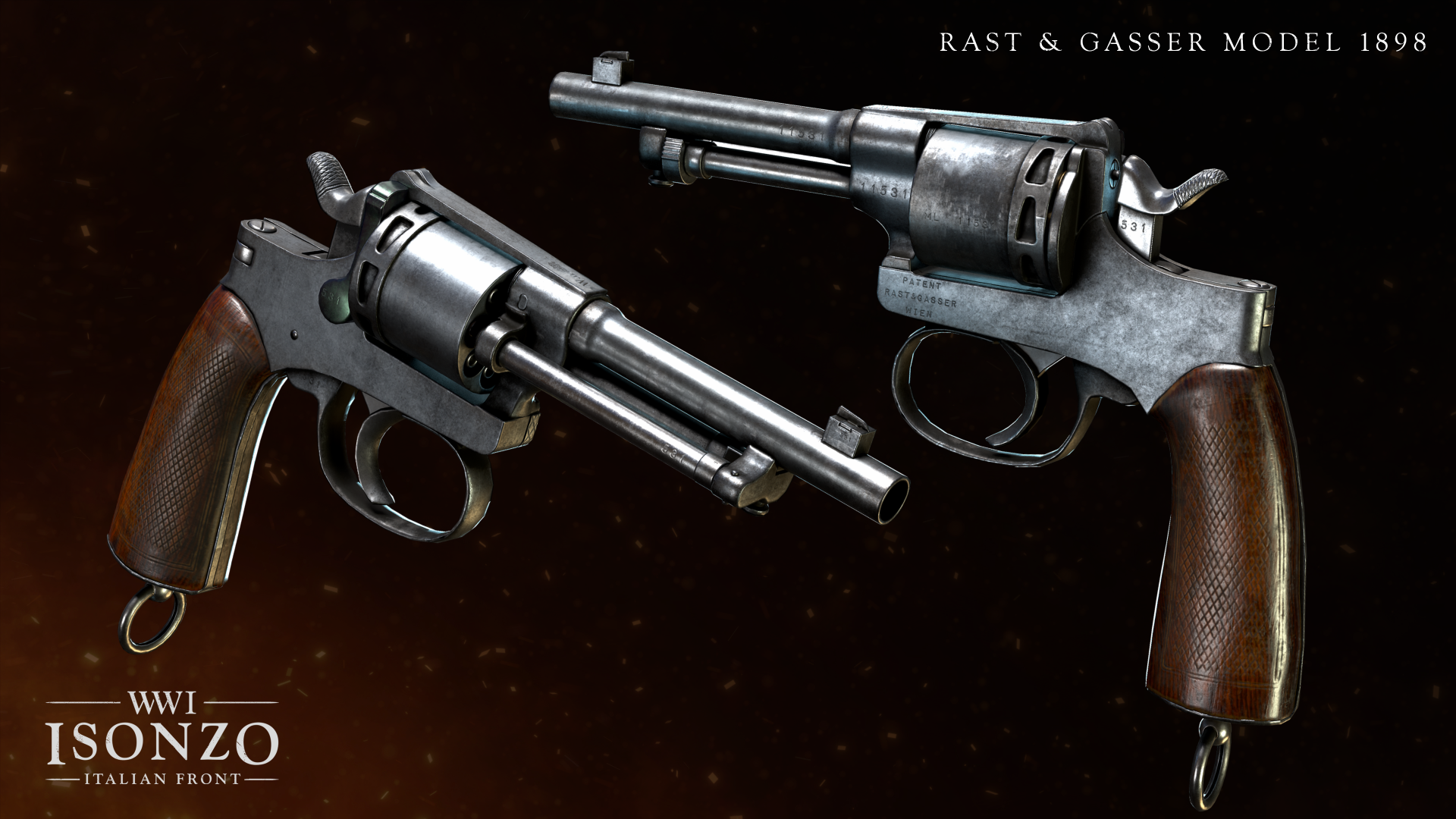 180,000 of these were built from 1898 to 1912, and by the time of WW1 they were in the process of being replaced with semi-automatic pistols - Steyr M1912s for the infantry and Roth–Steyr M1907s for the cavalry. But since production of these newer weapons wasn’t sufficient to fully equip the Austro-Hungarian armed forces, the Rast & Gasser 1898 would remain in use throughout the war.

One of the big drawbacks you’ll experience in-game is the loading-gate through which individual cartridges are loaded, and extracted individually by an extractor rod. This means rather than being able to empty all spent cartridges at once, you have to open the cylinder, use the rod to expel one round and put in a new one, rotate the cylinder, then repeat that process. Eight times! Use your shots carefully with this one, because you really don’t want to have to reload when you’re in the thick of the action!

This was the standard machine gun of the Italian Army during WW1, with a few surviving to see use during WW2 as well. It was… not the best heavy machine gun ever designed. The magazine could hold 50-100 rounds, but the way it did so was with a series of compartments, each of which held one five round rifle clip! As you can imagine, it made it clumsy to reload and meant the gun didn’t handle sustained-fire very well - quite a drawback for an HMG. On top of all this, it was liable to malfunction due to the awkward design. 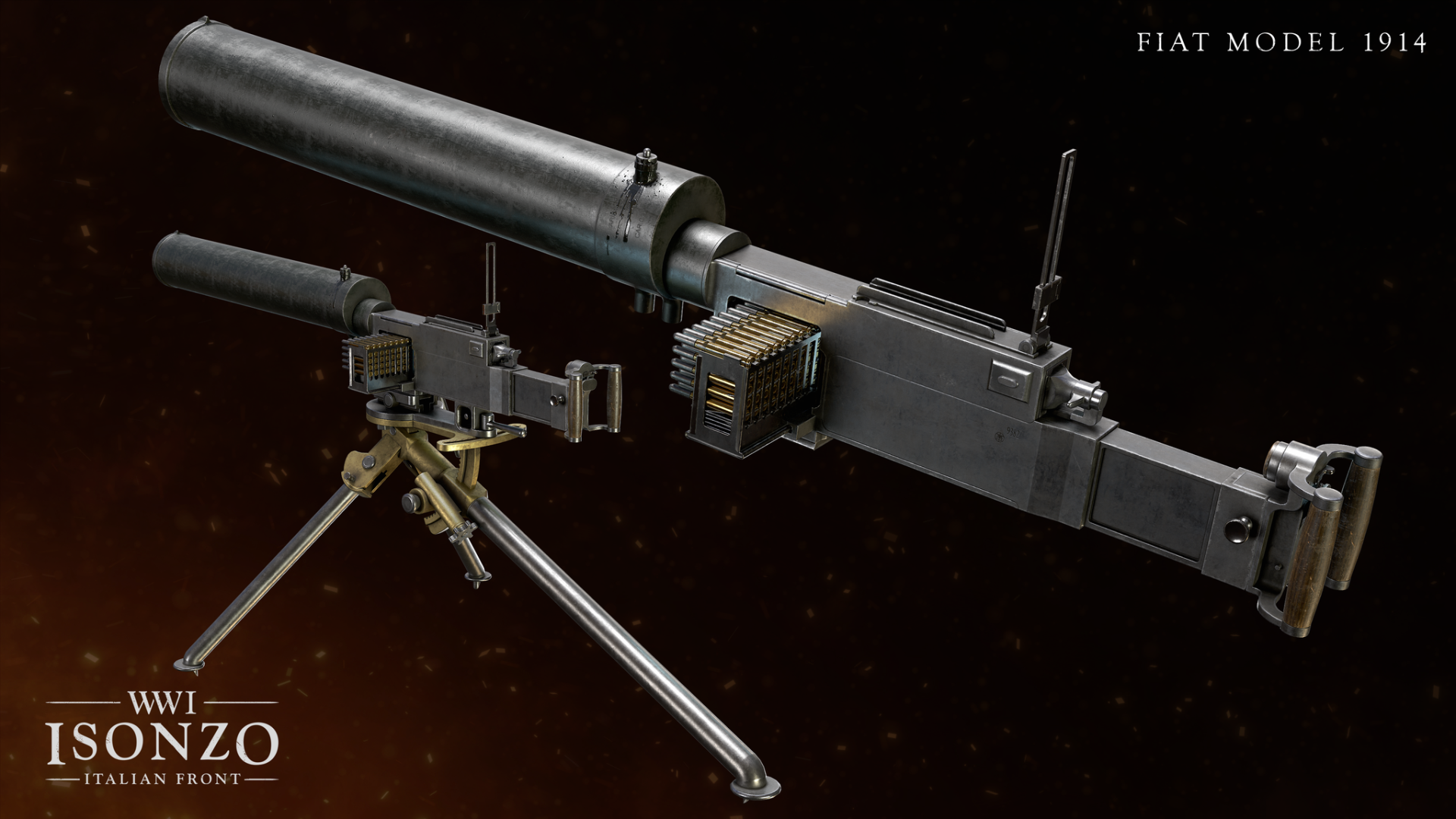 One positive from a logistics point of view was the gun’s use of the same cartridge seen in the Carcano rifle - though it wasn’t able to use the 6-round en-bloc clips issued for the rifles, which could almost have made the awkward magazine compartment system worthwhile. Furthermore, that 6.5x52mm round could be a little underpowered for such a heavy weapon. The gun itself weighed 17 kg (37 lb) while the tripod weighed more, coming in at 21.5 kg (47 lb). The firing rate of 400-500 rounds-per-minute wasn’t fantastic either, though it did have a nice option to switch between single and fully automatic fire.

You’ve seen the mortar in the reveal trailer, showing one of the on-map artillery pieces that will be featured in Isonzo. There will also be off-map guns as well, offering fire support that can be called in by officers. We’ll share more details about this later - in short, the system for calling in support does differ somewhat from the mechanics in Verdun and Tannenberg. There will still be large field guns present on the battlefield as scenery (or perhaps as objectives?) and we’ve put as much effort into modelling them accurately as we have all the other weapons in the game. We took the photo below as part of our research field trip last year. Can you identify the gun? 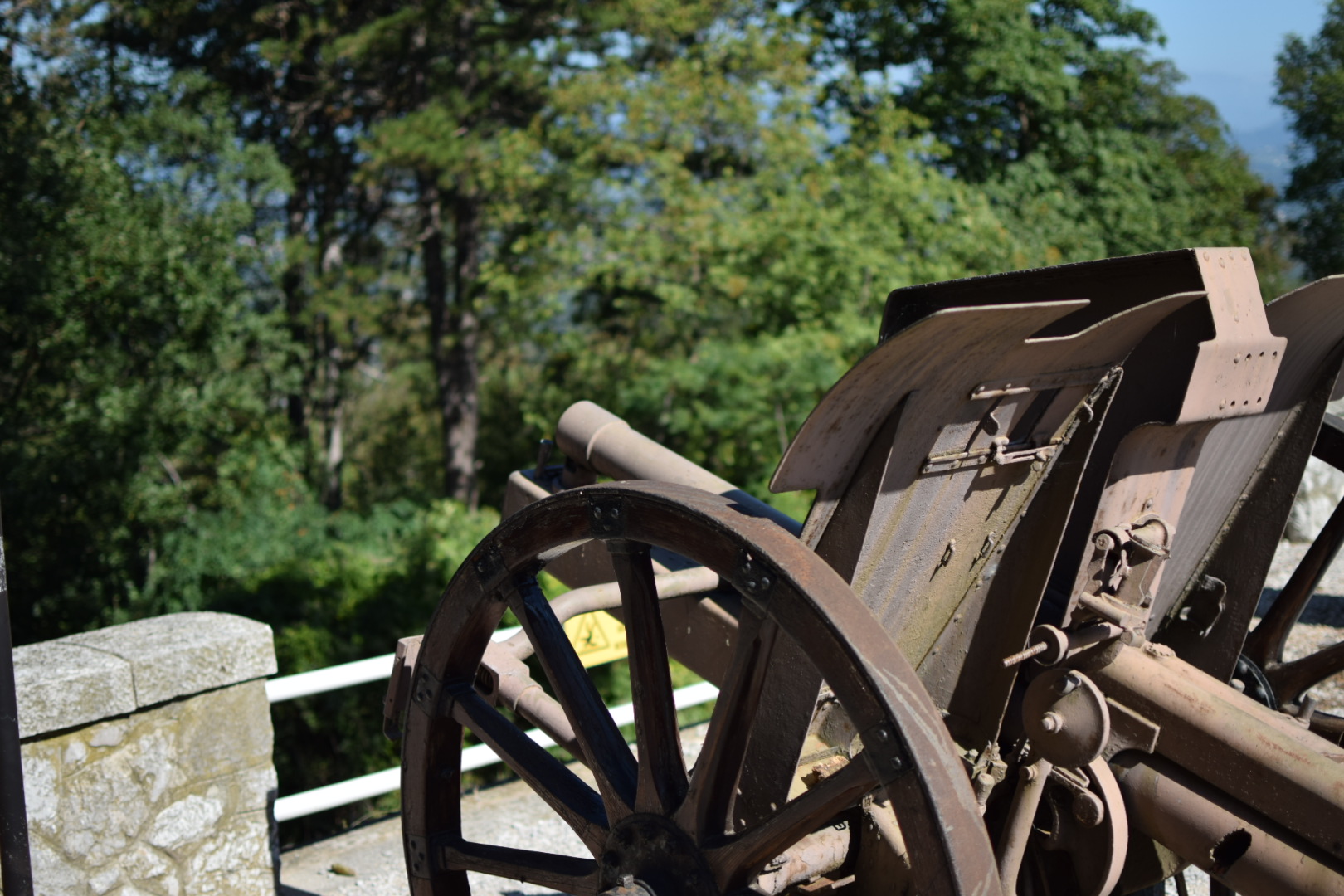 Earlier this week we released Verdun & Tannenberg on the current generation consoles, and to celebrate we’re having a free weekend for both games, on Steam, Xbox and PlayStation! It starts today and will run until Sunday the 20th. 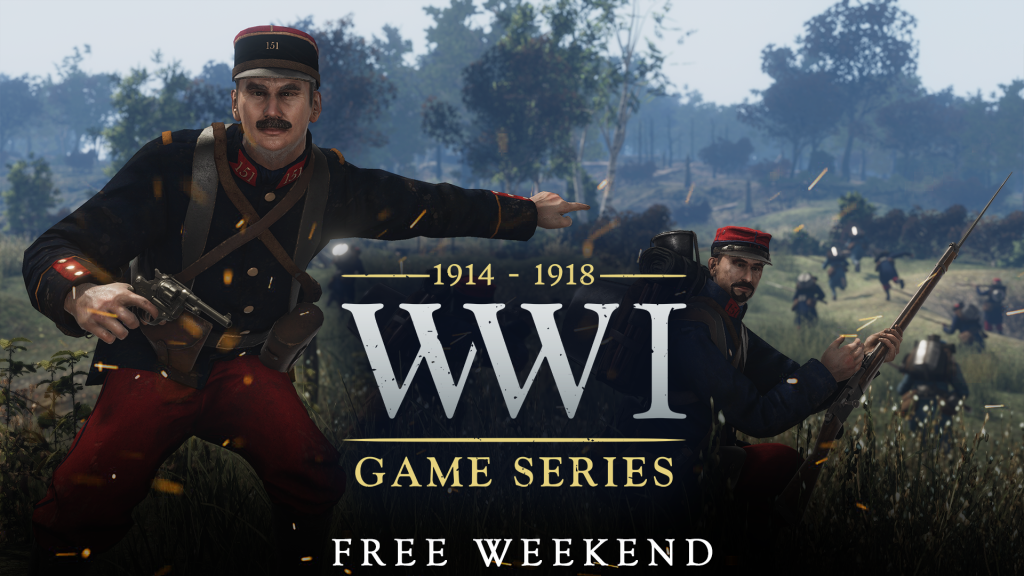 New and old recruits, the battlefield can always use more soldiers! Be sure to enlist during this period! The free weekend will be combined with WW1 Game Series sales! You can find the games separately with a 60% discount or as a bundle, again on Steam, Xbox and PlayStation!

Thanks for joining us for another Isonzo Intel. Finally, don’t forget to check out our Twitter for the latest updates and more teasers. For instance, what do you know about this pistol?