An overview of the gameplay, objectives and locations in Island War and how to play

Island War is all about freedom to do what you want. There are no boundaries (other than the ocean!) and no set order or sequence in which you must capture each location on the Island.

Quick Play vs Long Play
IW2017 has two main modes it can be played in. By default IW2017 comes set in Quick Mode.
Quick Play will allow you to play Island War from one of the 23 start points for as long as you like, taking as much as the Island as you wish. When your game is done (either by quitting or dying) Island War will not keep the state of the Island for your next play. Next time the PLA will have total control of the Island again. This allows you (and your friends) to use the start points as one-off battles.
Long Play is for the dedicated looking for something to tie all there individual play sessions together into a campaign of continual progress. Island War plays no different to Quick Mode, but it will save and remember the state of the Island between your play sessions. So for example if you take the Airfield, the next time you start "Attack on the Airfield" mission, your helo transports will drop you directly inside an already-friendly Airfield and objectives 1 and 2 will be completed.

Switching between modes requires that you edit Island War's configuration file. this is located within the games installation folder and is called IW2017.cfg

Change the above line to 1 if you wish to enable Long Play.

Note that while in Quick Mode, the Islands status is still constantly saved to disk, it is just not loaded when you start a mission. You can convert your last Quick Play into a Long Play by modifying the above configuration before starting the mission again.

Objective 1 and 2 : Infiltrating the Island and securing a Base of operations
The only preset or scripted sequence in Island War is the initial Infiltration sequence. During this sequence the AI will fly the two Seahawk's to one of several landing sights and set down. During this time everyone inside is invulnerable, so don't worry about any incoming fire (for now!)
Once all the soldiers have jumped out the mission begins for real. All of the US forces are handed over to IWai (except you) and given an initial goal of attacking the selected infiltration location.
You are recommended to assist with the capture of the initial location to ensure the US have somewhere to spawn in, but it is not a requirement. You can go elsewhere and capture another location if you wish, the US will attempt to capture the initial location on their own. It is important that the initial location is captured by someone however, and the US ai will risk all to get it. This is the place you chose for the start of the entire invasion and so they try very hard to get it for you!

Objective 3 : Secure the Island
The final objective in Island War is rather open-ended. Secure the entire Island.
To actually do this, you will need approximately 200-400 Hours of game time to capture the 97 locations over 200km/2
Choosing your initial Infiltration Point is important and the difference between easily gaining a foothold, and fighting tooth-and-nail to mark out some territory. 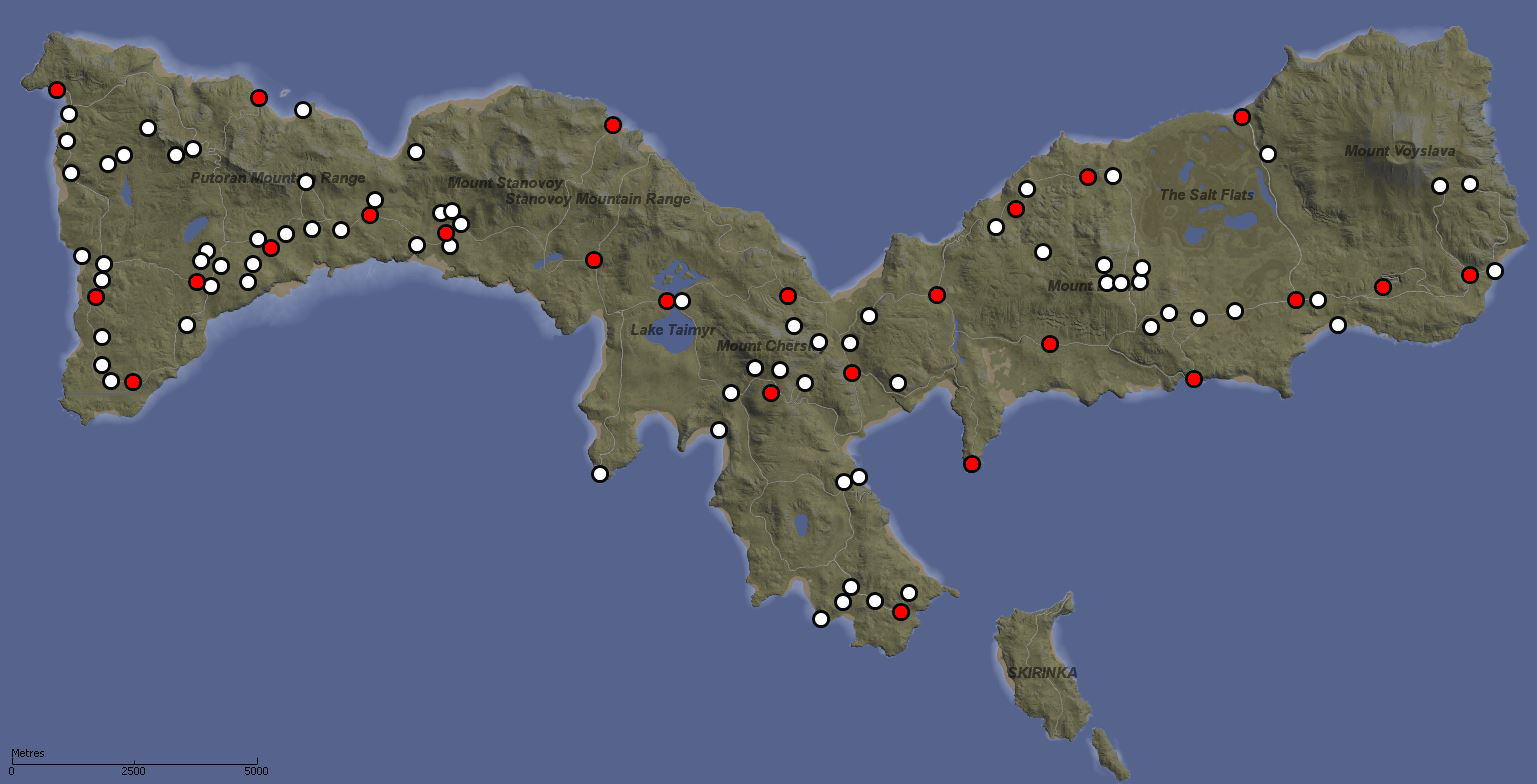 Each Red Dot represents one of starting missions, and each dot is a location must capture.

To actually win Island War, you will need to hold 90% of these locations for 5 minutes.

The Player Squad
The players Fireteam consists of 4 men, each of which can be played by a real player, or controlled by ai under Player 1's command.
During the course of the game however, many IWai echelons will join your squad and come under your control. To make this happen, just be around any US echelon for a few seconds. They will always try and ensure you have at least 1 extra echelon under your command, and up to a maximum of 5.
Waiting for a few minutes in a busy location will allow you to gather up a large enough squad to attack a location on your own, without needing IWai to decide to join you, this will give you the freedom to take what you want, when you want!

Locations, Capturing and Re-Enforcements
Each location across the island has associated to it a set number of Defence Points, Helicopter Defence Points, Vehicle Spawn locations, a strategic value, an area of influence and finally a control score. Check the gallery for maps of each location as I complete them.
Defence Points - These are both spawn locations, and positions that are particularly defendable (such as buildings, bunkers, sand-bag walls etc. If it looks like its a good place to defend from, assume the ai thinks so too.
Helicopter Defence Points - These are patrol points positioned in key locations in and around each location that give helicopters the best sightings on the location for defending it from attack.
Vehicle Spawn Points - Places where vehicles of various types can spawn.
Strategic Value - A grading system used by the ai to determine a location's value. An abandoned fishermens hut has no real value, but the airfield has huge value for example. (If it's a good place for a battle, or a great looking location it's got a high value too)
Area of Influence (AoI)- This is the area around the location that is considered under its control. As long as no enemies are inside the AoI, Re-enforcements can spawn-in at any defense point. (note that killing anyone inside this AoI will also stop spawning for a few minutes, even if you yourself are outside the area. This goes both ways).
Control Score - Represents the amount of control either side has over a location and is updated every few seconds.

When you enter the AoI of an enemy location, an internal battle-for-control will begin. Each side will count up the number of individual units they have inside a locations AoI and the side with more units will affect the Control Score of a location, the more units one side has over the other, the greater the effect.
If you have the numbers, you will gain control of larger locations early into you assault, but do not mistake this for a location being safe. The enemy will not secede a location for long!