On this week update i will represent to you, the Isengard Faction, and all its new features in BotTA mod

Isengard is the faction with the largest numbers of economy powers. In early game, Isengard can offer weak but fast and quick trainable Wildman Units, suported with Warg Riders and Warg Packs. Whilst they are good in killing other units, they are best use is in keeping your enemie advance while saving money and upgradin your base. Real Isengard's strenght is in late game, after purchasing the "Industrialization of Isengard" upgrade. This upgrade is very important for gameplay. It unlocks advanced buildings, upgrades and units (Uruk-hai). It also enables Saruman to transform into Saruman of Many Colours and gain new powers.

In order to make the gameplay as good as possible, many changes were made in Isengard gameplay system and Spellbook.

"Summon Wildman" power is replaced with "Armed and Ready", in order to show Isengard upgrading technology 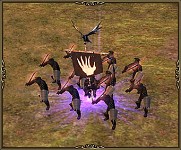 "Armed and Ready" will fully upgrade any selected battalion of Uruk-hai, Warg Rider or Wildman Unit 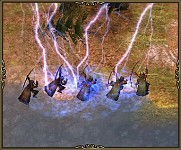 "Fell Thunder" calls a single lightning bolt upon the enemy. This is especialy strong against single units and Siege Weapons 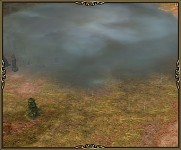 This spell debuffs your enemy. It is best used if called upon the enemy base, it slows the poduction speed of hostile buildings and slows enemy units.

"Summon Dragon" is replaced with "Fires of Isengard" 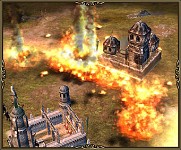 This spell call a devilish fire storm upon the enemy 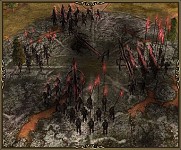 This spell summons several hordes of Uruk-hai Units and Ballistas under your command for a short time.

Both of theese spells are enabled after "Industrialization of Isengard" Upgrade

Isengard Heroes
Along with new textures, Isengard heroes have recieved number of new abilities, in order to help them in their role in the gameplay and bring them closer to the book lore

Saruman is Isengard Main Hero and the most very important for gameplay. He starts as Saruman the White ,he cannot fight or take any damage, except magic damage. He boost your economy with "Metal and Wheels" which is very important since Furnaces produce less resources than other economy structures.
Except economy boost, he is also a debuffer, can control enemy units with "Wile Words" and cripple enemy Hero.

After "Industrialization", Saruman the White becomes Saruman of Many Colours. he gains vast number of new abilities, such as his well known Wizard Blast and Fireball. Sarumans greatest power is his voice, by which he can control enemy units, severely cripple enemy Hero, or insipre his troops with "Speech Craft". He also has many passive powers which makes him very dangerous for any enemy. He can lead his army with "Power of the White Hand", strenghten your heroes with "Saruman the Wise". But his most dangerous passive, is "Voice of Saruman". It both debuffs the enemy and makes the hostile to eachother, this power even effects Heroes on level 10.

Wormtongue is possibly the weakest hero in the mod, but that doesnt mean that he is useless. He is not a fighter, but an exellent assasin. Already on level 2, he gains passive which makes him gain Experience double faster. He can debuff enemy with "Venomous Words" or take a control on the enemy Hero for a short duration. But his most dangerous ability is "Backstab", which, combined with "Escape" can be very effective against enemy Heroes. It delivers great amount of damage to an enemy Hero but if "Backstab" is delivered from behind the victim, it deals even more damage.

Sharku is the most important for your defence in early game. He can summon a Warg Cage which contains a Blood Warg, which defends the area in small radius, or, it can be released to attack freely across battlefield. But he excels in leading his Wargs. He can train them, leads them in blood hunt or sounds a powerfull charge. 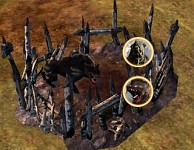 Wulf is the Chieftain of the Wildmen and one of the best early game Heroes. He provides leadership to Wildman and can summon svereal battalions at his command at level 10. He is especially good for early game because of his "Skillful Pillager" ability, which doubles the amount of resource, stolen by your Wildmen.

Lurtz is the leader of Uruk Scouts, which are the only elite units trainable in early game. He provides leadership for them and improves their vision and speed for a long duration with "Find the Halflings" which is very good for raiding or hunting the escaping Heroes. He can cripple enemy Hero with his well known "Cripple Strike" or wuickly eliminate any persistent enemy with "Carnage".

One of the Heroes with strongest armor in the mod. Ugluk is a powerfull warrior and main leader of your Uruk-hai units. He is a tanker and an army leader, especially good in attacking an enemy camp because of his "Rabid Shout" which increases the damage of Urik-hai nearby, that power, in combination with his defensive leadership, is a deadly combination. He is also excelent in 1 on 1 because of his "Uruk Rage" which increases his damage and leaves the victim in wounds, disabling it to heal even if it manages to escape.

The most important upgrade in Isengard Faction. Without this upgrade, it will be wery difficult for you to destroy the enemy base. "Industrialization" is available once you gain "Fuel the Fires" from spellbook. After that, the upgrade button is enabled in the Fortress and you can purchase it. After purchasing, you can upgrade "Excavations","Burning Forges" and "Iron Plating" Upgrades at the fortress

"Excavations" is important since it enables "Breeding" upgrade

, which allows Uruk-Hai units to be trained 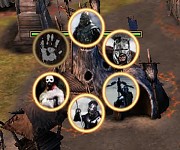 It also enables the construction of Siege Works, Armory and a Mine Launcher Expansion.

Wildmen of Dunland are the minifaction for Isengard, but unlike other factions, Dunland is available at the beggining. Wildmen are trained and upgraded from Wildmen Tent which can be built by a builder. 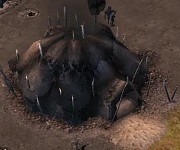 Wildmen serve as a basic unit and defence, but they are also strong against wooden structures, especialy when upgraded with Torches. They have a "Plundering" ability so they steal resources whenever dealing damage to enemy buildings, which is usefull in early game.

After "Breeding" upgrade, you can no longer train Wildmen, because you will have Uruk-hai units, which can be fully upgraded, making them the strongest units in the game, except Elite Units. This sustem is made in order to fairly balance out the faction.
Since "Summon Wildmen" spell is replaced, and Wildmen are no longer trained affter "Breeding", i didnt wanted to expell them from Isengard completely, so instead of training them, they can be summoned from the Wildman Tent for a brief of time. You can summon 2 battalions od Wildmen Fighters and 2 battalions of Axe Throwers, fully upgraded, under your control. 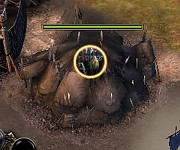 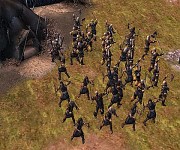 Isengard have a special system for constructing for some of the buildings, Uruk-Pit, Warg Pit, Siege Works and Armory. After constructing Lumber Mill, you can see two options, first is for recruiting Laborers and the second is for summoning a build plot 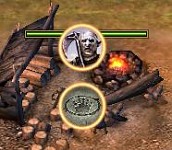 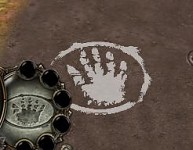 This simmon creates a build plot in a medium radius around Lumber Mill. On this plot, you can build Uruk-Pit, Warg Pit, Siege Works and Armory. 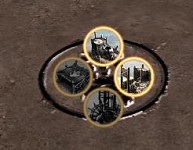 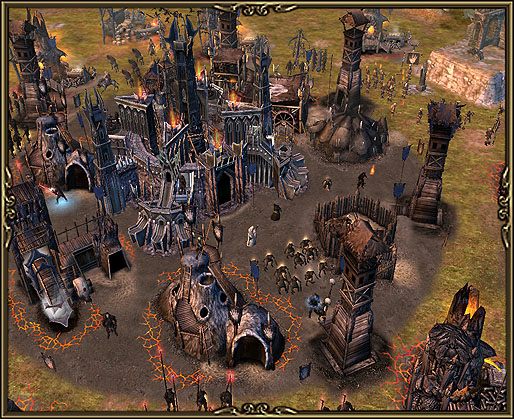 What a great update!! Keep this game and mod alive

It is nice to see that work is started up again. This mod is just fantastic made! If genius won't explain this mod, nothing will.

this mod is one of the best!

I whant to put the ring on witch king