Hello! My name is Artem Netyagin and I'm author of IRON GUARD game. I wanted to share with all my passion project, which dragged on for almost seven years, underwent three complete alterations, change of team, several changes to the platform, and only now has it finally begun to move towards its logical conclusion.

I have two bad traits.

First, I really don't like monotony. Even as a schoolboy, I hated going to school, only because the route was terribly boring. I got impatient as I felt I was wasting time on the road.

Later when I started my career in the gaming industry, I quickly got tired of working on long projects, so in my free time I worked on prototypes. Which are still lying around on old HDD and sometimes as in this instance, being completely naive started work on two projects in parallel.

Secondly, I am an "absolute perfectionist", as my colleagues refer to me.

I will torment, suffer and pull my hair out and of others also, if something does not work out the way I imagined it, or if I cannot execute everything as I had planned.

I hope you find this article interesting, and maybe it’s even useful to someone. Yeah, and sorry for bad english :)

Me, in 2013 as a young developer, who already knew his way around the engine (Unity), teamed up with a programmer, and together we began to work on a mobile Tower Defense game. Along with this, we started a social media group, where we would share screenshots and news of our work. This was a great decision, because thanks to this, many old screenshots have been preserved and the development history can be seen at a glance.

It’s difficult to remember all the details, but as I remember we started with Unity 3.5, it had no proper UI back then, so we made our own. We tried to keep performance less than 100 drawcalls by combining meshes together and optimized it to the maximum. I created 3D models of the level and turrets, and bought the enemies characters from the Asset Store.

As for the idea and gameplay, there isn't much to write home about. At the time, I really liked the game Tower Defense - Lost Earth and wanted to do something similar. The thought process was quite straightforward: there was a road, enemies walking along it, players building and upgrading turrets to keep enemies out of the base. We came up with the plot, cutscenes, and dialogues much later but that's a completely different story. 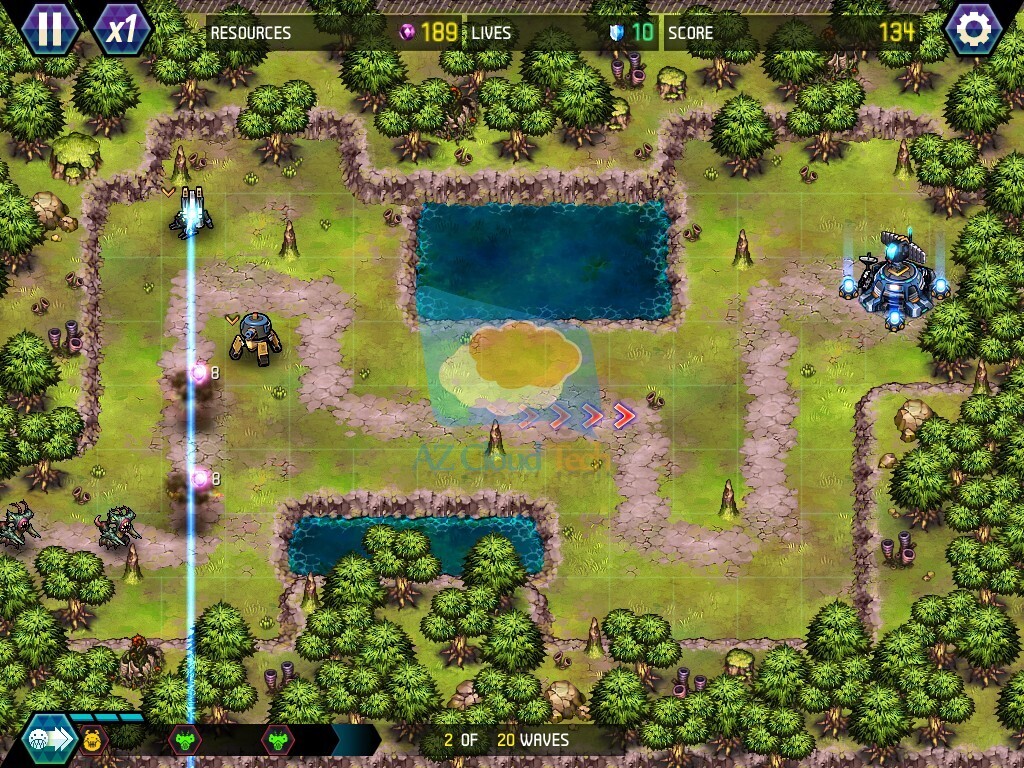 We had hoped that we would make a small mobile game and it would be an easy project and wouldn’t take much time. Oh Boy! was I wrong...

Of course, everything was done with sheer enthusiasm. It was later that I derived the following axiom for myself “Enthusiasm lasts a month.”

Without financial support, the only incentive for an indie, is the desire to create the game itself, but after a few weeks, when you are faced with personal and work regimen with lack of free time, the passion begins to slowly fade away and there is a risk of not finishing the project, which is what I faced.

Therefore, you need to either have a very strong commitment and support or not get involved in large projects and restrain your urges and start with something simpler. But again, this is definitely not about me :) 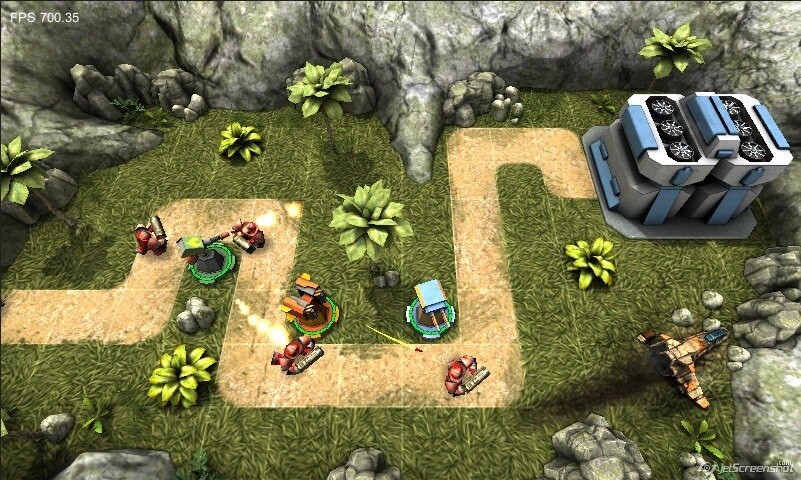 Screenshot of the first version of the game

There is also a positive side to enthusiasm - you learn quickly and master many areas of game development, although there is also a downside to that coin - understanding everything a little bit and nowhere you can achieve mastery/professionalism. Usually such people are called "the one man-band" and they like to dump various tasks onto themselves.

My friend helped with the music (a couple of his tracks even made it in the current version of the game), and I wrote the main theme in FL Studio (at that time I was into creating tracks which had an Epic feel to them).

Separately, I would like to say the voice acting of the AI which pronounces the actions of the players, is customary in classic RTS, was ordered from VoiceBunny. I remember as a reference I liked the voice of the female-Shepard from Mass Effect, it was strong, clear and had a sense of seriousness. Voice acting cost me as much as $100 for a small pack of lines, it was expensive for an indie developer, even by those standards, but I liked the sound so much that I did not regret it at all and much of it is still used in the game to this day.

To test the first version, I used a very inexpensive smartphone and a Chinese brand tablet. Android tablets I believe were just beginning to appear on the market then and many were made by Chinese companies. I bought mine from some huckster off an ad. As a result, the tablet showed a sad 5 fps but on the phone the game ran without problems (25+ fps). 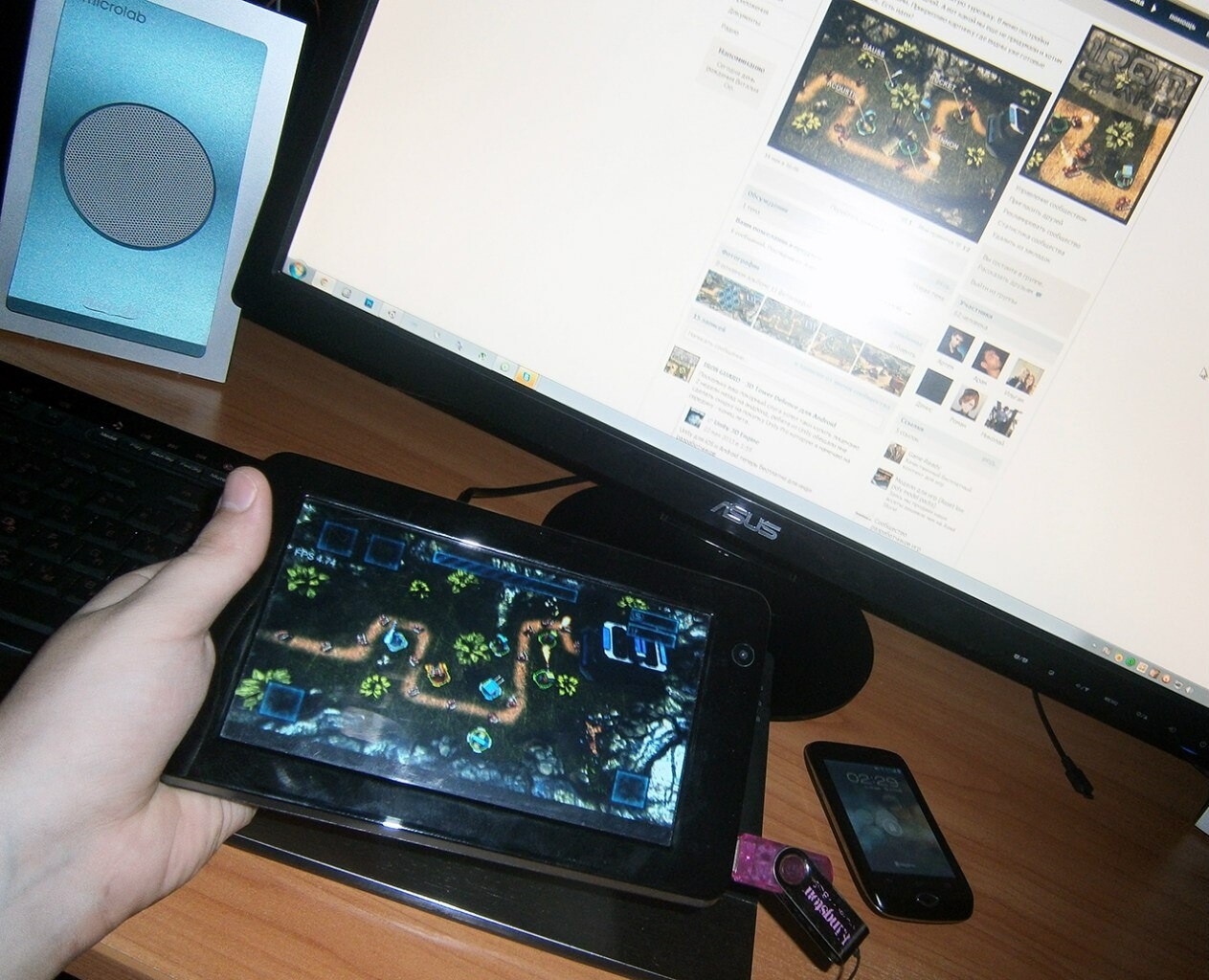 Can you stick a USB flash drive into your tablet?

As you may have noticed, the UI has appeared in the picture. Artist joined our team and created art and game interface. As a result, I redesigned the level and remade all the turrets, made 3 upgrade levels for each and posted the old ones for free on the Asset Store, thinking maybe they will come in handy to someone. Surprisingly, they are still downloaded several dozen times every month. 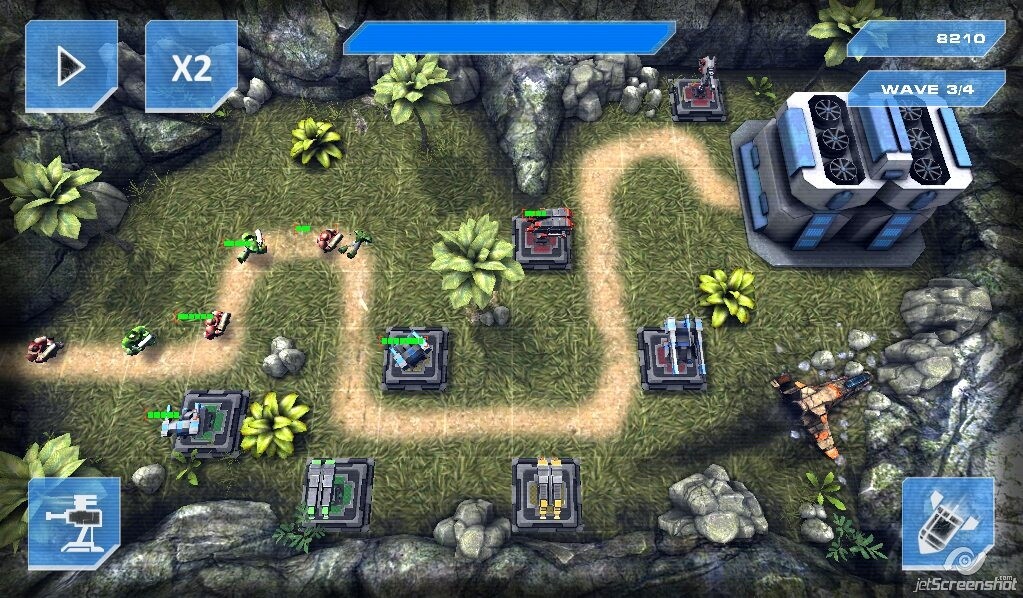 Thanks to the concept-arts, the design of the game had reached a new level. Looking at it now, it certainly looks funny, but back then for indie it seemed quite cool. By the way, novice developers shouldn't underestimate the importance of concept art, it helps maintain the overall style of the game. 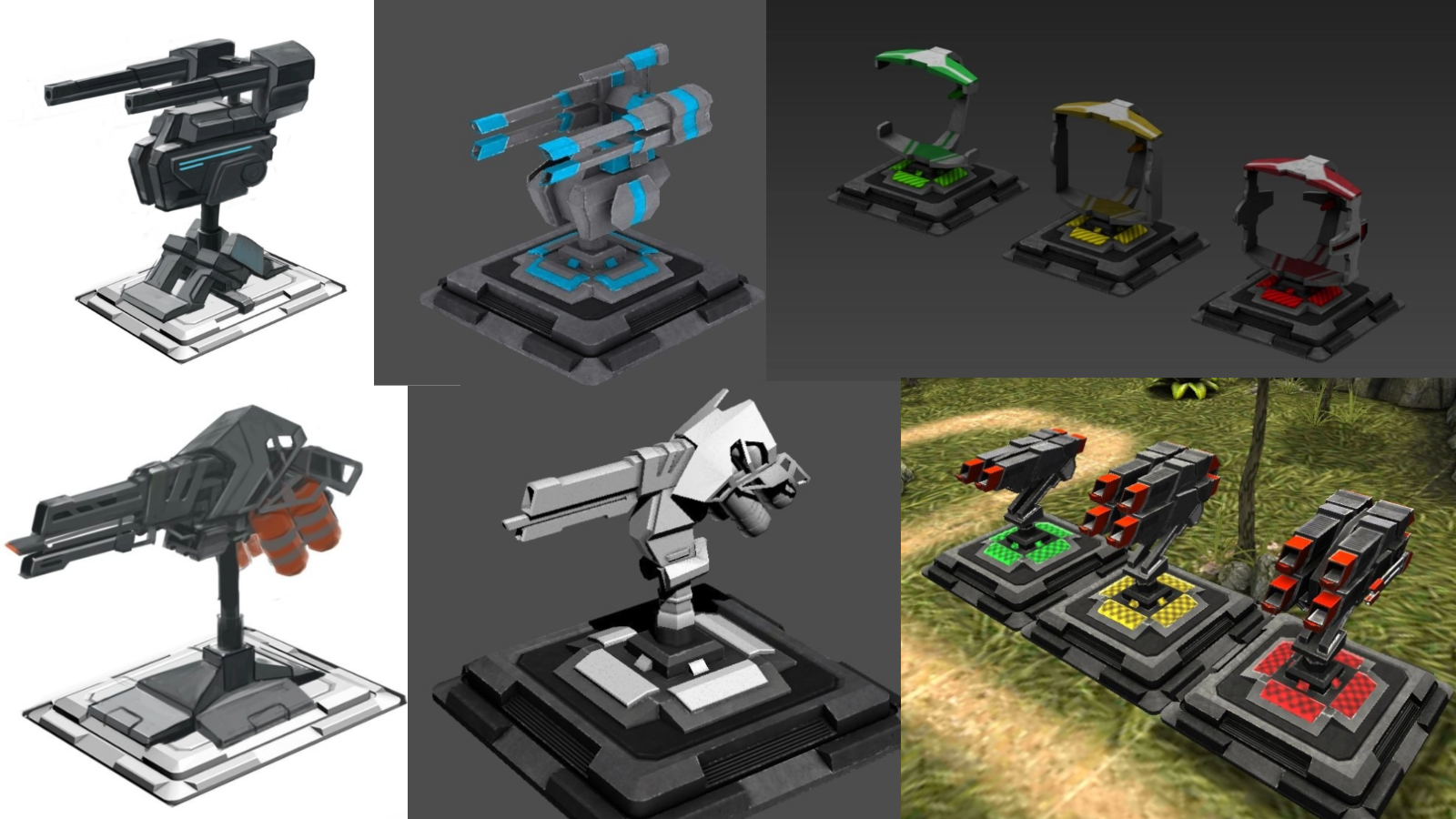 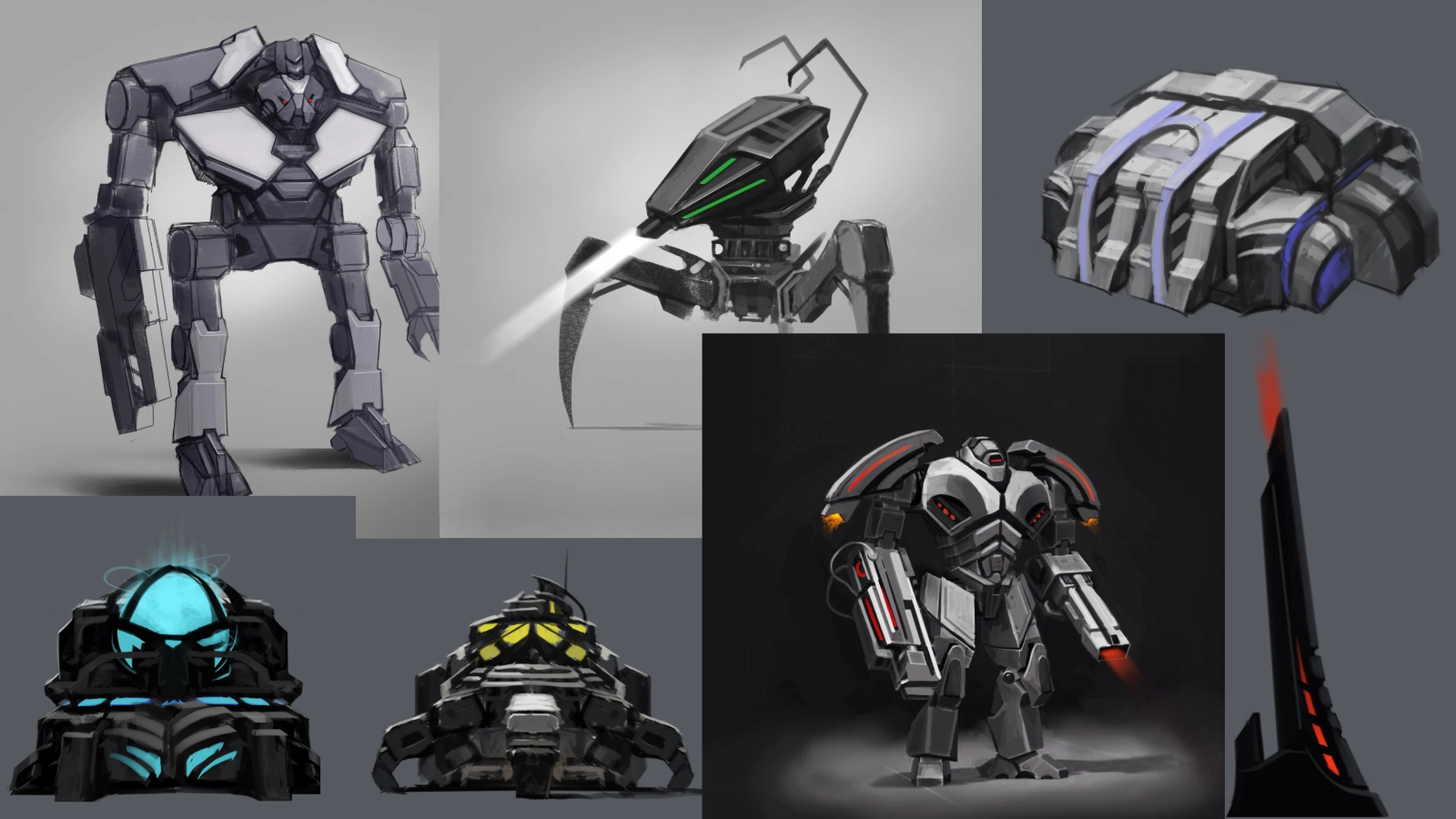 Unfortunately, these art pieces were never used ... My favorite is a robot against a black background. I still think its looks cool.

Along with an artist, I also began to improve the design and update the main menu (which by the way hasn’t changed too much). I used Mass Effect 1 interface as a reference: 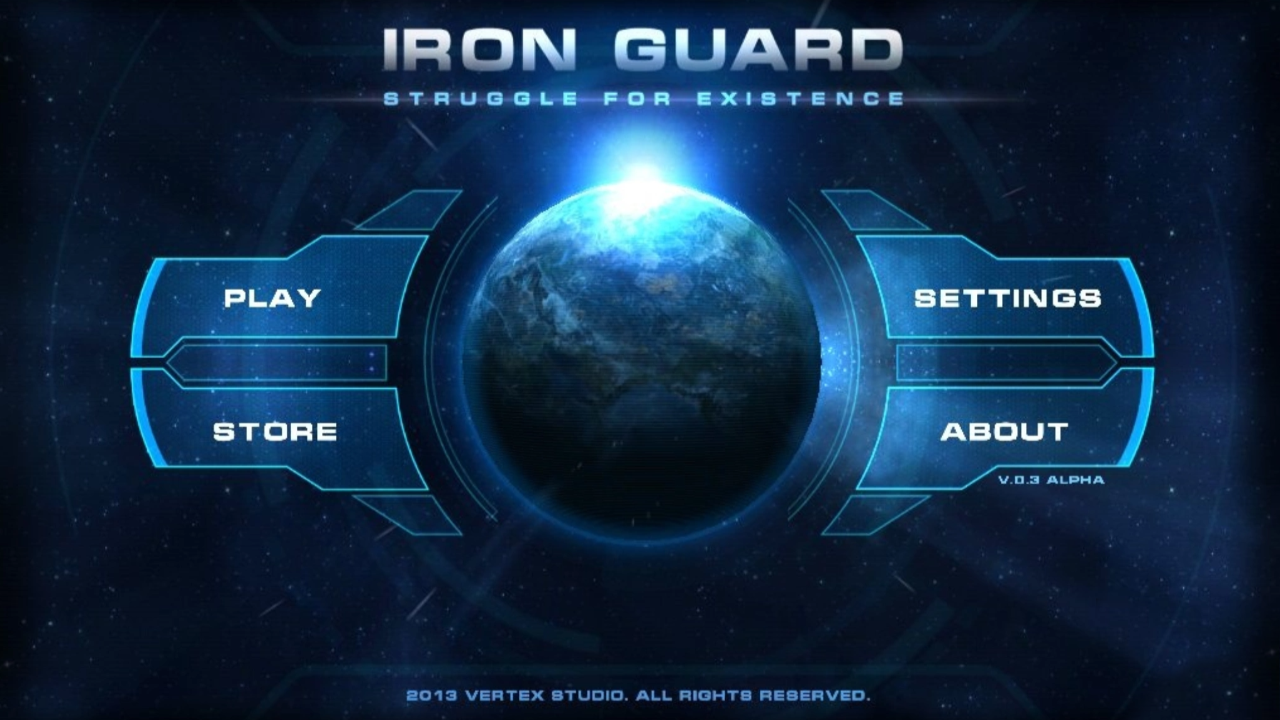 Then once again I heavily changed the design of the level (yes, we had not advanced further than the first level during all this time). It had now become darker and more alien-like, and the game as a whole had begun to look a lot more serious and had a strong atmospheric presence . We completely redesigned the interface so that it didn’t look sub-standard in quality, we bought a template from the Asset Store and used it as a starting point. 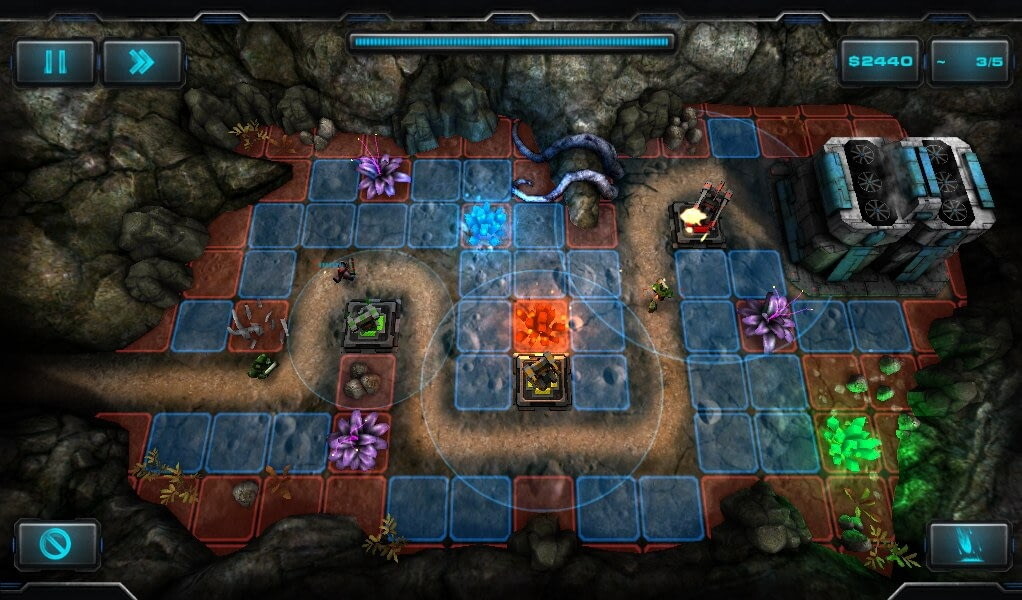 The next important stage for the game was DevGAMM Minsk 2014 . It was a very big event for us, but in the end it also buried the project ... By this time we realized that Iron Guard is already going beyond the "simple mobile phone" and without money we simply cannot complete the development. The scale turned out to be much larger than it seemed at first. So we hoped to land some funding.

And here I am in Minsk at DevGAMM 2014. I was given a stand for the project, I laid out two tablets(this time I got more powerful devices, the smaller one is the Nexus 5, and the bigger one is a Chinese brand but still very good for it’s time), laid out business cards, a sheet with a QR code for demo and prepared for the tests. There were enough people showing interest, some even played more than five minutes and overall the reviews were pretty good. 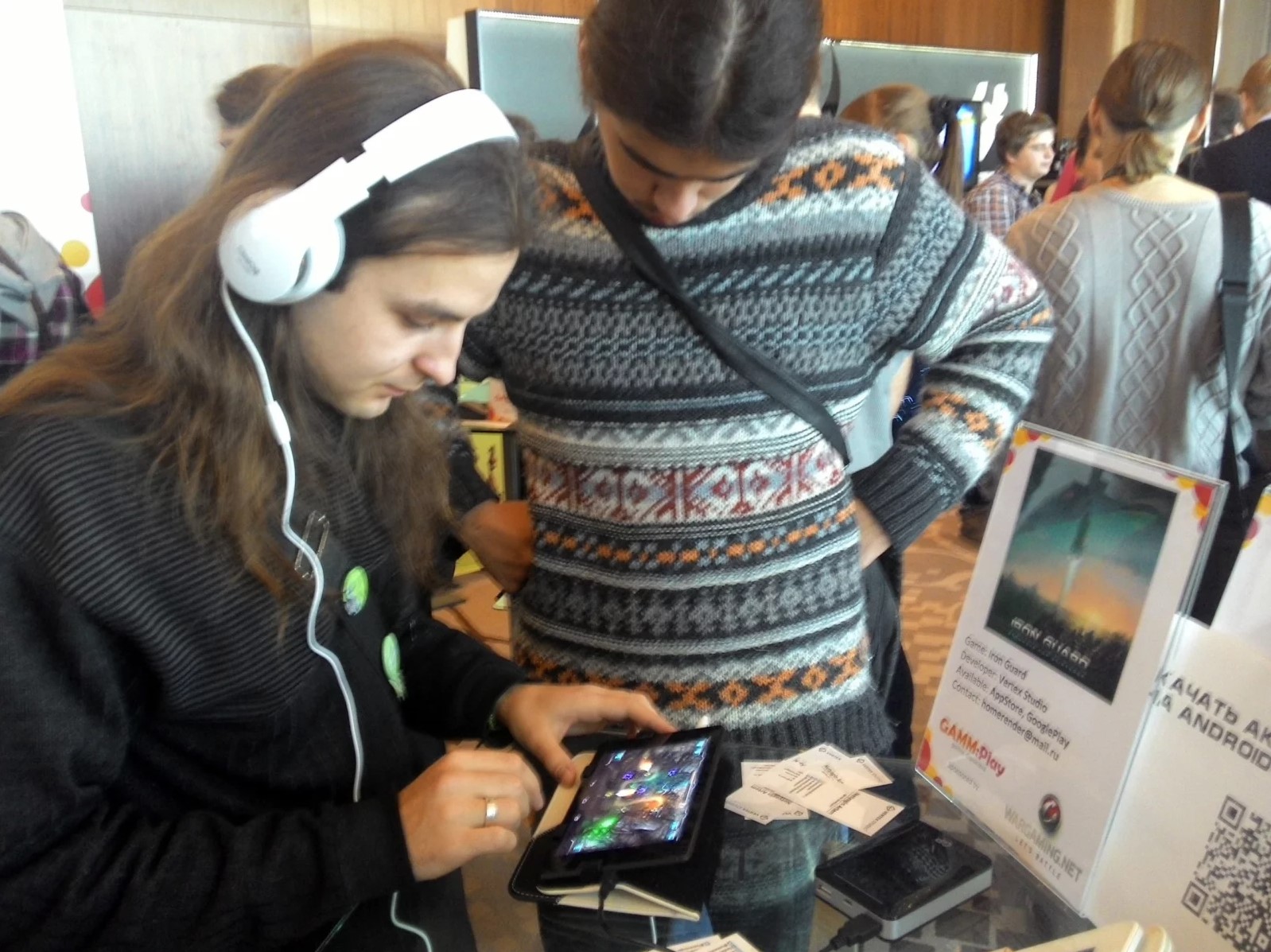 But the main reason why I went to DevGAMM was to hopefully meet some publishers. “Speed ​​Game Dating” was what it was called or something like that, back then. A group of developers and publishers gathered in a small room, and every 2 minutes a new representative from a publisher sat down across you and I had to quickly and succinctly show a demo and tell them about the game. The game, again, interested many, but, to my disappointment, no one was ready to invest in it. Everyone was interested in either a finished game, or almost finished (90%). As a result, I left with a pack of business cards and longing in my soul and the project stalled. Upon return, I just updated the demo on Google Play, added a small message at the end of the level, and that's it ...

Two whole years had passed since. Thanks to ComonGames studio I was completely immersed in the development of my new big project The Uncertain. But, as I said, out of boredom and out of stupidity, instead of resting after work, like normal people, I began to try to revive IRON GUARD. At that time, I had some funds so I decided to invest them in the project, I connected with a new programmer, and we began to redo everything almost from scratch.

Why was it stupid you ask? Because the main job project took a lot of time and effort and it affected the second project (IG) tremendously. Don't do this, be consistent. "Chasing two hares at once ...", you know what that leads to. This was a mistake I hope not to repeat again (although who knows, I'm a glutton for punishment :)

In general, this is how the second attempt to revive the game began. And then everything turned out quite chaotic and foolish. For example, I ordered the turret concept-art from an artist and it turned out to be cool, then the CG artist created the model based on this concept, but when I saw it, I understood that it looked overdetailed and would look bad in-game... 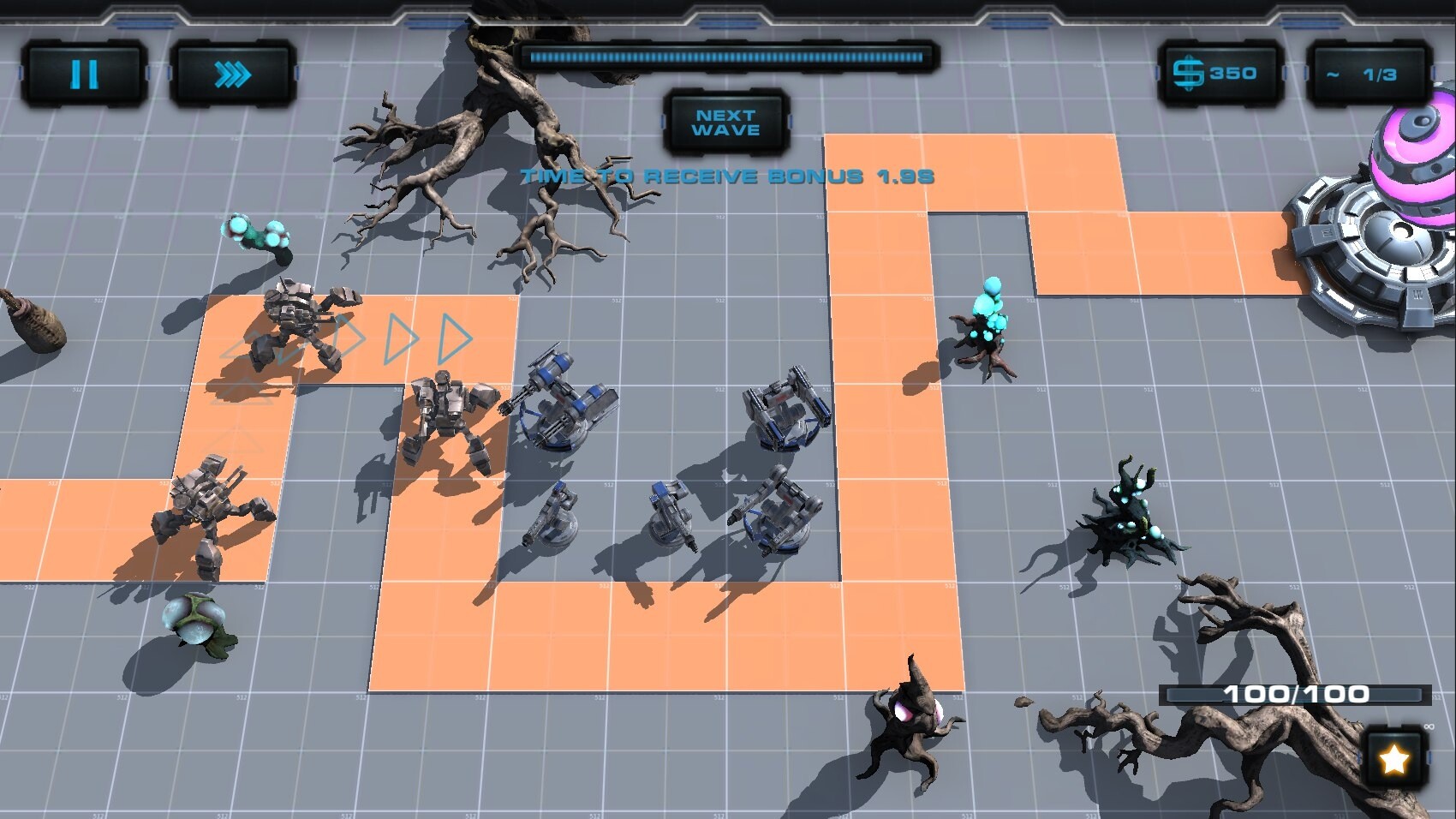 In general, I didn’t like the final result, but here I have only myself to blame and my inexperience. Guess what I did with the new turrets models? :) Right. 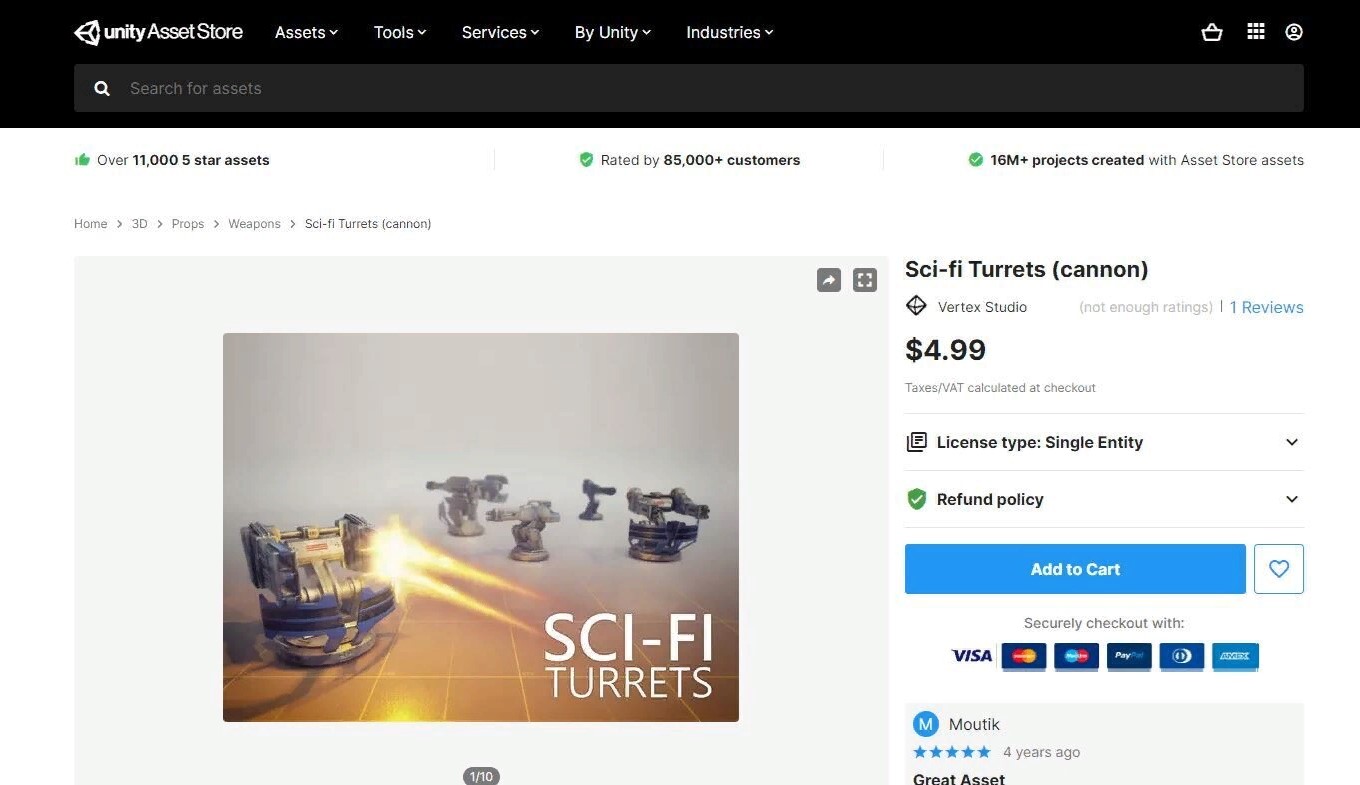 This asset is not free, although it never paid off.

After that, I went down the proven path and just bought an asset. Using it’s various modules, I created turrets and they looked quite good. Later, I bought more assets from the same author. Of course, I'm not a fan of games built entirely on assets, so I try to use them to a minimum, but in this situation it seemed it was the best solution, plus due to it’s modularity, the design was unique to an extent.

By this time, the devices had become noticeably more powerful, and I stopped denying myself such delights as post-process, particles, number of polygons, shaders and other goodies. As a result, the game output had become more cheerful.

In parallel with work on graphics and gameplay, we created cutscenes. To give a sense of some motion, the artists created the source artwork in PSD and I exported individual layers to Unity as sprites, and animated these layers using the standard engine tools.

As a result, at that time we got this:

It was no longer shameful to give a build to the testers.

By this time, my colleague from the US with whom I often worked on VR projects saw the game and wanted to participate. He then offered to remake it in VR.

In order not to turn this article into a monster, I will be glad to share more in the next part, if you are interested to know more.

Thank you for reading, pls add your comment and I will be happy to reply!

P.S. Hey, and we are releasing in a week! Support us please and add to wishlist :)