Some generalized thoughts about the project as a whole and the latest version of the demo.

What I'm hoping will be the final version of the demo (for a while at least) should be up now as I write this. It has numerous quality of life and balance changes. I have very poor judgment when it comes to the gameplay difficulty of IA, but other sources so far lead me to believe it may be on the easy side. This is what demos are good for: finding development blind spots and weird jank that you as a modder became desensitized to.

Check it out here.

I'm always happy to hear your thoughts and feedback, so don't be shy.

The next big item is something I've been putting off for too long, and has basically halted new content. All of the art in IA uses palettes found in the original game. However, these palettes are somewhat washed out and dull, and this creates two issues:

So development, at least when it comes to new maps, npcs and objects, has mostly stopped because it would be a waste of time to import new art in its current washed out palette.

So what's the solution?

Essentially, going back to the source and directly tweaking the palette to have more "pop". The reason I'm dreading it is because the export process uses a pile of garbage python spaghetti which I would describe as "User Hostile" even to the schmuck that wrote it. So it will require a proper rewrite of that process.

Here's a concept image that shows the proposed color changes (thanks Lagi), with the current washed out colors on top and the new ones at the bottom. I guess it also acts as a preview of some of the new machines which will come in future versions. 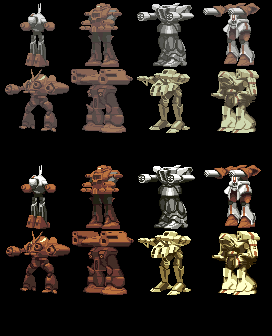 A pretty handsome collection of stompy gentlemen, if I may say so. The goal is more vibrant colors with greater contrast. I'm not sure if this will be done for all art in the project, or just npcs and objects. We'll see.

There are a few other things about this projects future I want to spit out here. Firstly I was made aware that for whatever reason IA does not function within the Delta Touch android port. I'll be looking into this, but the mobile ecosystem is completely alien to me. I fear it might be a fruitless endeavor.

I'll take the chance here to lay out, content wise, what the full project will be. I'm planning on 5 operations, containing a total of around 16 missions. Future environments will include the arctic and the new mexican desert. There isn't much to showcase at this point, due to the aforementioned art issue.

Once a mission is completed you will be able to play it in skirmish mode, which will let you tweak some things like your start location and enemy composition. There is also the possibility of multiplayer, but this is a distant goal and GZDooms capability in that regard is pretty limited.

For equipment, expect many more weapons/modules and a final total of at least 12 pilotable mechs (there is art for more, but some of it will require hand adjustment to be usable).

This is turning into a wall of text, and in this age of TLDR that's never a good thing. So I'll wrap it up by quickly shooting off some other stuff on my TODO list: