Well, here it goes. There will be a lot about game design in general, so stay tuned!

Hello everyone! I am Bryku, and I am a software developer. As a part of my regular job, I create .NET applications - mostly in WPF, lately. Additionally, I spend some of my spare time designing and prototyping video games - and I believe today is the right time to start sharing all my experiences with all of you.

Instead of running a blog, I decided to create a game project and post my experiences as articles here. The reason is that I have created quite a few game prototypes so far, and didn't find them very enjoying (hey, that is what the prototyping is about anyway - figuring out which ideas are fun, and which are not, right?). However, recently I stumbled upon a game idea that might be worth digging into - and that's where the idea for "There's no one left" appeared.

"TnoL" is surely NOT an arcade game of any sort. I simply do not feel like designing a game where the player needs to use their reflexes to achieve something. It doesn't mean that I do not like playing such games, hell no! I enjoyed the new Doom very much, for example. It is just that I prefer to design more calmer approach - so turn-based stuff, generally. Things like XCOM or Civilization series.

So yes, "TnoL" (and all of my previous prototypes, which I will surely describe in further articles) will be a turn-based game, if you can call it that way. The player will have a pool of action points (replenishable at the end of each game turn) that they can spend on different actions.

The game is about a making sure that a person who suddenly became alone in the world survives long enough to escape the area. Or maybe to solve the game plot in a different way. Hard to tell right now. This is tied to the narrative and the story of the game, and on this early level of prototyping is not that relevant. That being said, I believe that the game should be placed in a steampunk world. And that is simply because I like this stuff.

OK, so I stated that the story is not really important for now. What is relevant though is the general direction that the game should be heading to. My core pillars of the game are as follows:

One might say that "TnoL" will be some kind of a more advanced tabletop game. And I totally agree. To be honest, "Civilization" series are also kinda tabletop - but due to their complexity, one wouldn't be able to play it nicely without the support of computer's processing power.

Anyway, that is all about the game idea for today. Now, some screenshots! These are from the prototype that I am creating in WPF. The graphics have been created by me. I use pixel art as for me it is the easiest form of creating visuals that don't look like crap.

Here we have the shelter view - so the main "base" of the player, with the possible actions that the player might undertake. Also, all the stats are visible on the top - including the number of action points left in the day: 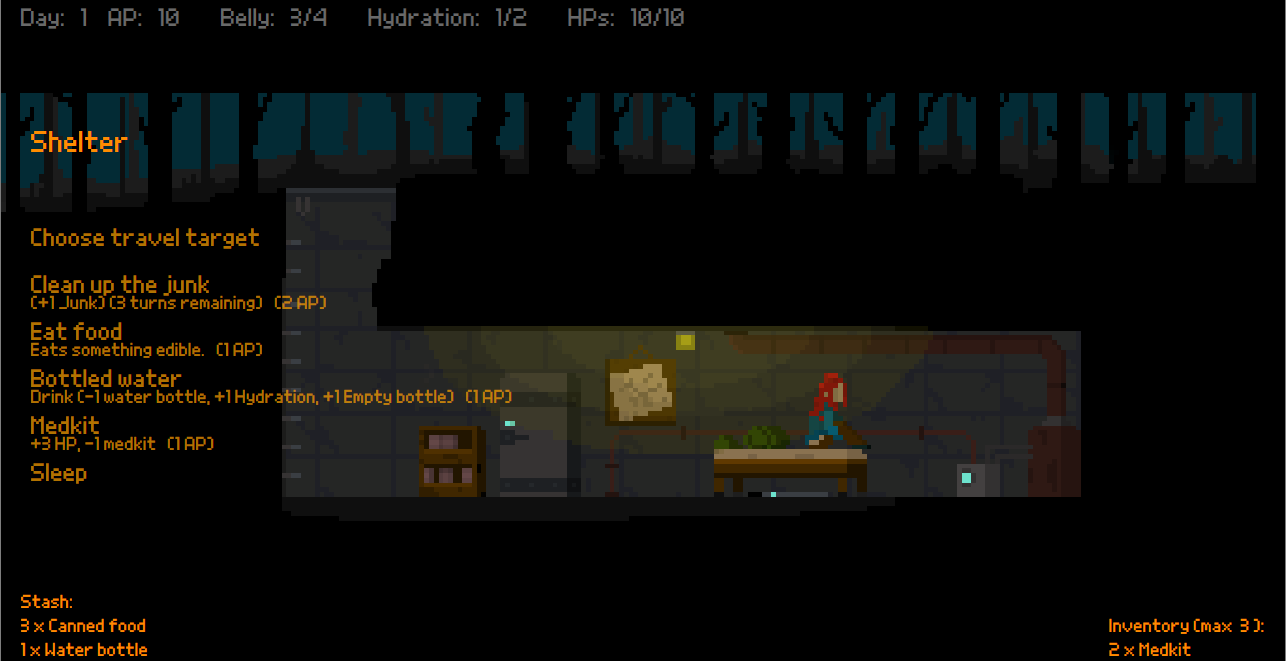 Here's a shot from combat screen. I will surely write more about the combat in further articles.

The wolf is cute, isn't it? 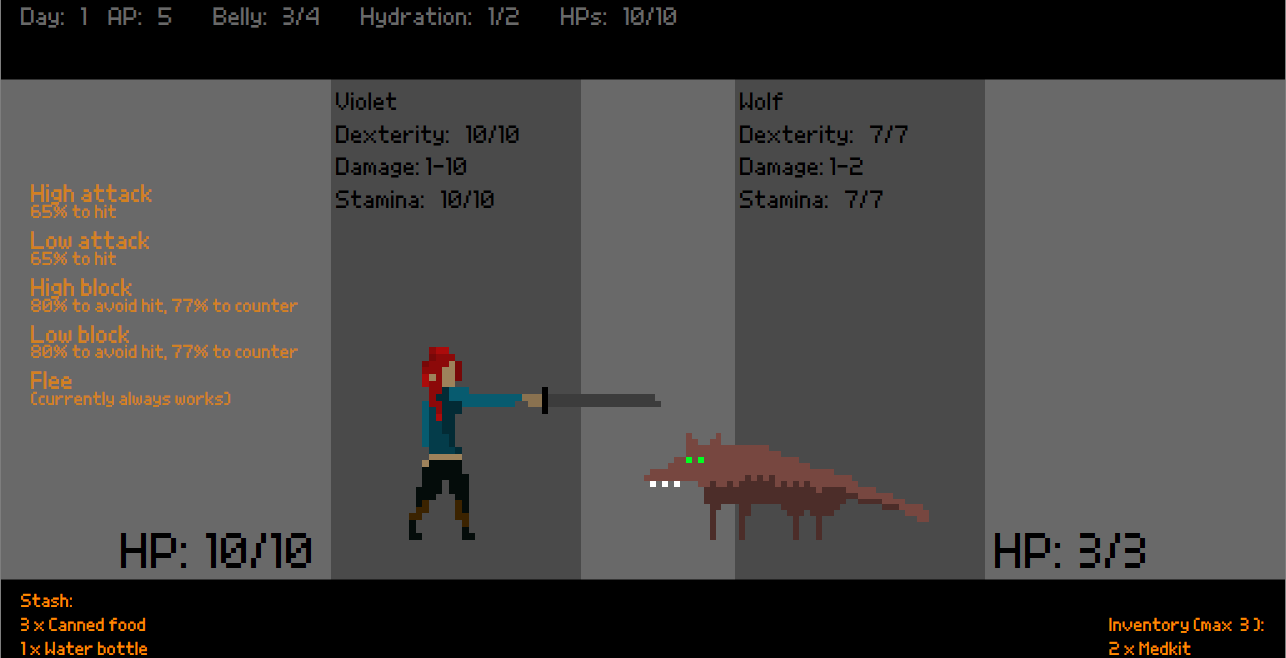 And finally, here's a shot from one of the locations that the player is able to go: 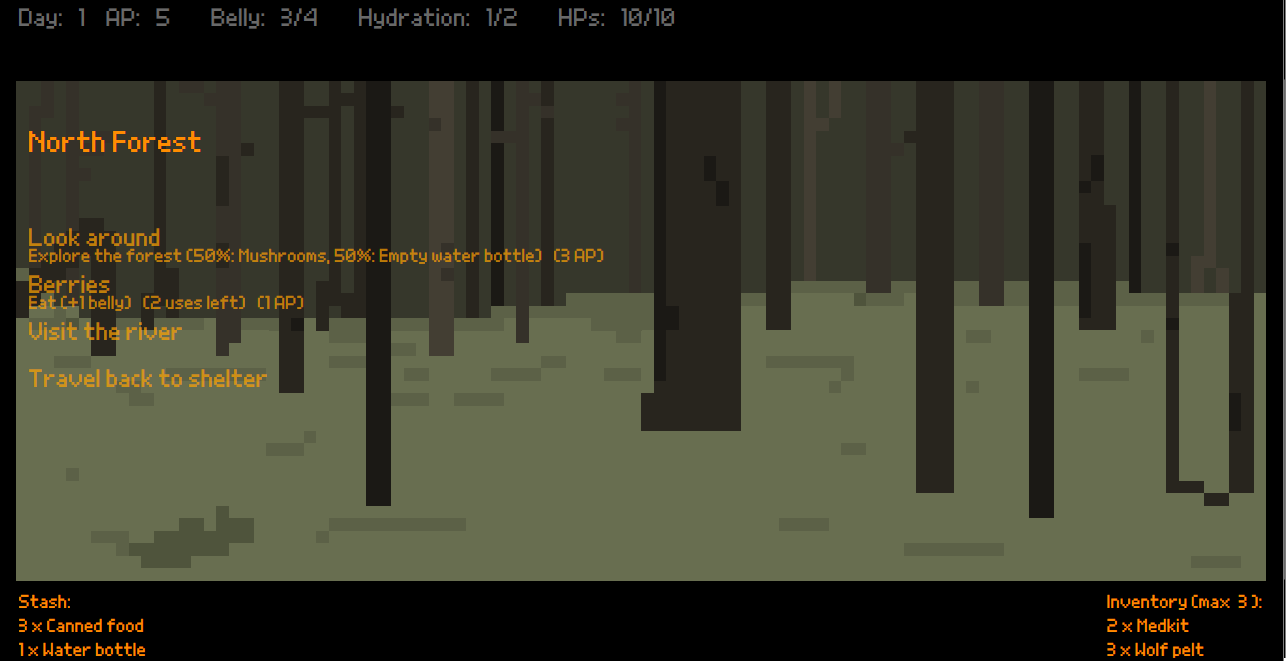 Alright then, enough for today!

So the idea is that all my articles appearing here will be related to game design, including my thoughts on game mechanics, story, narrative or visuals. I will also be surely posting all the progress on the "There's no one left" prototype. Stay tuned, and I hope you will enjoy it!