A Brief introduction of how I designed A Stroke of Madness.

Posted by astrokeofmadness on Dec 7th, 2014

Hello and welcome to A Stroke of Madness. I realized at the start of 2014 that I really wanted to create a visual novel. So I began to think up ideas and work around the constraints of the medium and my abilities.
I knew I would have to make the cast of characters limited and to limit the location so I wouldn't have to draw a huge list of different backgrounds. I had a very different plan originally, in which It was going to be a police interrogation story. This was going to take place almost entirely in 1 room and only have 1 character ever appear on screen. The player was going to have to decide if the person being questioned was innocent or not. This idea was dropped as it simply wasn't interesting enough to me to move forward with it.

This led me to the creation of A Stroke of Madness. i wanted to make a more fantastical game with some mild mystery elements. By setting the game primarily in a forest I was able to cutback on background art while still delivering a varied amount of backgrounds. I'm also significantly better at drawing landscapes then I am buildings. 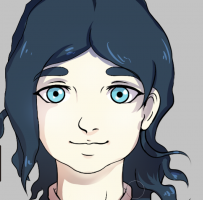 I broke the cast down to more or less two characters, and decided on a more character focused story. This allows for the limited characters to feel more important due to the extra time spend building up their relationship. I hope that through this approach the characters of Blaise and Aria will feel more genuine then if there were 10 other cast members vying for time.

The game is short as another means to improve the overall quality of what you do get. I want this game to feel polished and to create a polished first game I feel I need to work small-scale. As soon as you work too large it becomes too hard to ensure quality throughout.

I will be updating with new images that will be used in the game as well as some for fun images. Anyways, I hope that everyone enjoys the game when its released ^_^ 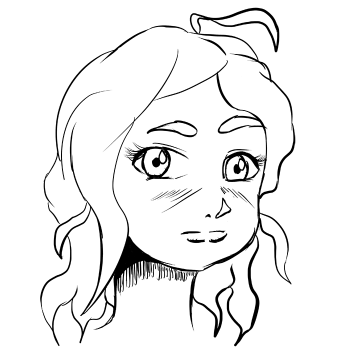 Here is an example of an early portrait I drew for Aria. I wanted to give her a less anime look, so I made her head/face shape less sharp and more rounded. I wanted her to make her unique looking as well so I gave her thicker eyebrows and included the straggle hair on the top of her head. I think this inclusion made her more visually
interesting. 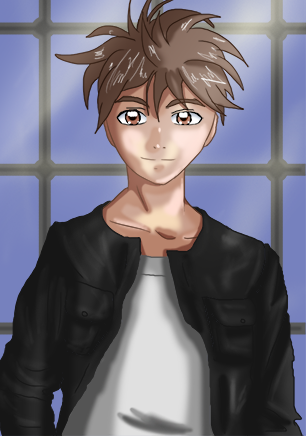 This is the current design for Blaise, although in actuality this was drawn as one of the characters for the Interrogation story I mentioned earlier. I'm not entirely sure I will be keeping this design, but I do think it works rather well for him.