An introduction and feature showcase! I haven't posted an introduction article, so I thought it'd be nice to do so and share my twitter and all the progress I've made so far for my alpha prototype.

I'm making a game I'm tentatively calling Pakuri, which I'm making in Unreal Engine 4. It's an RPG Sim of sorts where you manage your city of characters and fulfill their wishes. They'll start as Novices and then they can job change into first jobs and second jobs. 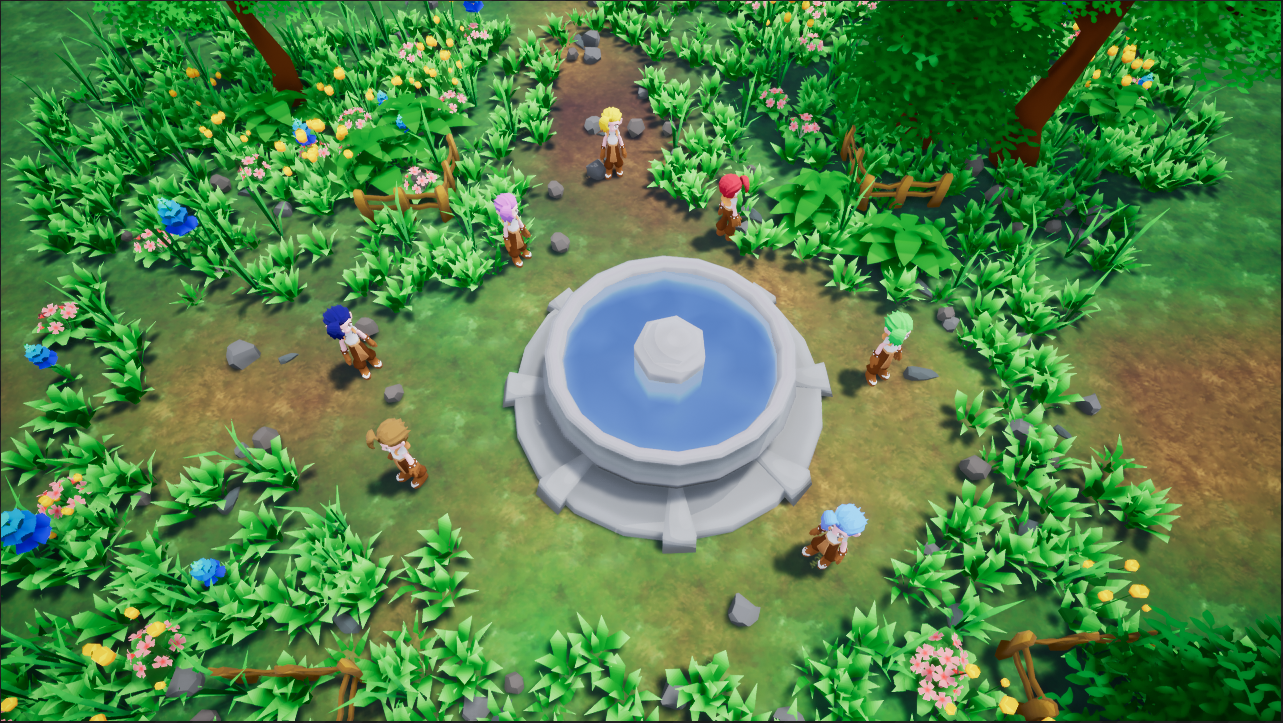 You can see here you'll start at your city center (with your purdy fountain), and new characters will start to plop into the world. You can see here it's just 1 hair type and different hair colors, and for now I've only made the male Novice. I'll have both male and female variants of every job I plan to make of course such as the Swordsman, Cleric, Mage, Archer, Peddler, and Rogue.

That's all I have finalized for now more or less in terms of gameplay, you'll be able to send them out into the world and discover zones, and then in the future I plan to allow party formations and bosses, etc. But that's getting ahead of myself!

For now here's a summary of the features I've implemented:

2D Emote system that follow 3D characters. I added a system of some cute emotes so the characters can express themselves (either in frustration, anger, or happiness). I can make lots more emotes, but the system is done now and I've actually fixed it so it looks better in my newer iteration (emotes look like they stick to the characters better)

When a new character enters your city, you'll get a popup with a dynamic render of the character. Later on I'm going to add traits, so you may get a new character that wants to be a Mage and will be inefficient as any other job :).

I also made a player list, so you can see all your current players with some minimized information (just their level, current experience progress and their status). You can click the magnifying glass to center the camera on the character if they're present in the city (otherwise if they're out hunting or questing, you won't be able to center camera since they're out of the city.) The expand button will open the next feature.

Player Information, it expands on the player you want to see and shows their equipment and stats and has a dynamic render of the player with a turntable. (Yes I know the turntable directions are actually wrong. ;) I fixed it.) I also adjusted the speed so the turn rate is faster and feels better. You'll be able to see the character details this way, and see if the character's getting ready to head back to town to sell junk they found (looking at their weight limit). And their equipment which you'll be able to upgrade individually.

And there are little features like camera panning and edge scrolling, asynchronous loading so there's no snagging/freezing when new players join your city or when your players will change job and their outfits will change.

I'll be updating you guys every time I add a substantial feature set to warrant a big article again, but if you like to see my progress in real time, my twitter will be getting updates for each little feature I add before I have enough for a juicy article again.