Greetings Troopers! Welcome to another content update as we storm ever closer to the next release of First Strike. Believe me, when you finally get your hands on this you'll see why it took so long. This update will reveal the final shiny new toy we will show you before release.

Greetings Troopers!
Welcome to another content update as we storm ever closer to the next release of First Strike. Believe me, when you finally get your hands on this you'll see why it took so long. This update will reveal the final shiny new toy we will show you before release.

The Imperial Sentinel Landing Craft has been on a long voyage before it finally arrived in game within First Strike. I started work on building this not long after I first came to join the Dev Team, and though it was finished in a timely fashion, at that time there were no maps suitable for an asset of this size and power, and more importantly, no texture artists which were available to put the considerable time and effort in to get this beast textured, coding was also an issue, you have to remember this was before we'd even got the Lambda Shuttle flying. As a result the Sentinel lay in mothballs for some three years.

Then in 2009 with work beginning on Jundland Wastes the opportunity arose to resurrect the Sentinel, with this map being set around the time of A New Hope on Tatooine, it was the perfect fit for the scene in the movie where you actually see the Sentinel drop off Imperial troops as they search for a pair of rogue droids. There would never be a more appropriate map on which to reveal the Sentinel. With his impressive work on the Jawa Sandcrawler already under his belt, Krenyo was the natural choice to take on the task of texturing this massive Imperial war machine, and as you'll see from the renders below he has done a grand job. 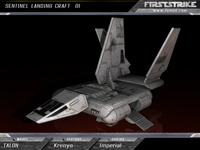 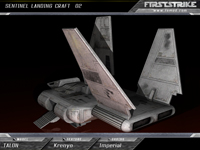 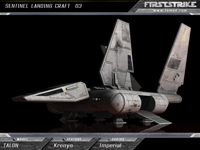 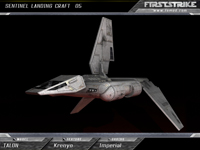 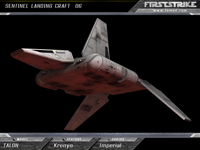 So just how will the Sentinel as an asset play within First Strike? Well the Lambda is one of the most popular craft in the mod so far, its tactical applications are near limitless with its impressive array of firepower and ability to swiftly transport a high volume of troops pretty much anywhere on the map, in the right hands it is a force to be reckoned with which can turn the tide of a map. The Sentinel is all that on very strong steroids. The ship operates as a mobile command post, wherever it lands troops can be deployed at a moments notice with impressive fire support from the Sentinel's defensive blasters, shielding over the troop deployment ramps will mean that if enemy troops wish to plant explosives inside to deal heavier damage they'll have to venture on board to do this. Life has just gotten that much tougher for the Alliance. When Rebel troops see the silhouette of this monster on approach it is time to run.

Yeah that a sweet looking model! Great job!
Hmm...Empires Mod was suposed to have aircrafts, that model would nicely go with the Brenodi Empires transport ship xD
Nevermind, I was just thinking out loud!

Nice, simply marvelous, I wondered whether or not this monster would be featured, after seeing the Lambda I thought that the Sentinel couldn't be far behind, while it was farther than anticipated, it still wasn't far, 10/10 for the ship guys, I just wish I could find a half-populated server on this mod...

We expect a resurgence of players with the next release, it has been a while since our last which is part of the reason for low numbers of players right now, but head for the Community Games on weekend nights at 8pm GMT and you should find plenty of players on.