Today we introduce one of the more stupid inhabitants of our game. The Lydile.

The common Lydile (of the family Lypidinae) is one of the most widely spread creatures on and beyond Haven. An invasive species from a now dead universe in which we believe Lydiles accidentally became the apex predator after eating everything else, they have since spread to the point where members of the Lypidinae genus can be found inhabiting almost every environment across many of the known worlds of the ‘verse. 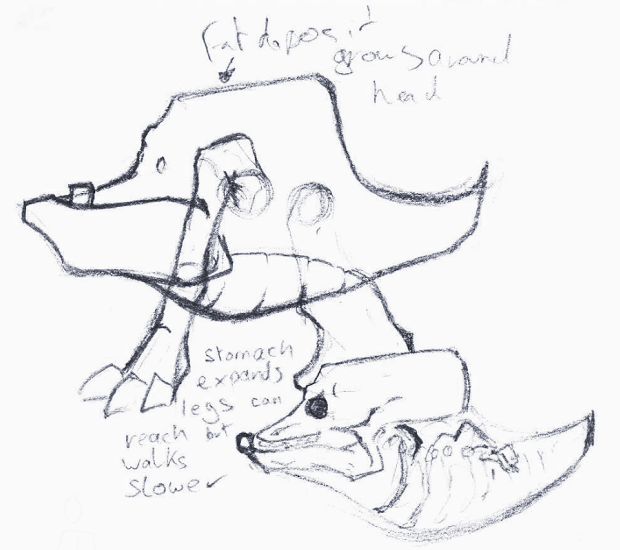 Known to be able to suffer severe damage without reaction, they are some of the most resilient creatures in the known ‘verse. Even juveniles can prove a danger to inexperienced adventurers, but a rogue adult lydile near a population centre is cause to summon a team of Vanguard. Thankfully they are so stupid, most will die of natural (mostly self-inflicted) causes before reaching adulthood.

Here we see the majestic Lydile racing to an unknown destination. It is quite likely that the Lydile itself has forgotten why exactly it is running.
Their digestive systems can deal with most anything through sheer stubbornness. Lydiles have been known to eat rocks when convinced they’re food (note: to convince a lydile that something is food, it is often quite sufficient to simply place the item on the ground in front of it and take a step back).

This Lydile has found something it wishes to eat, and is doing its best to disguise its tail as a worm. This appears to be the Lydile’s idea of stealth.

A Lydile can unhinge its jaw, allowing it to swallow items as large as, or larger than its own body. As efficient as the lydile digestive system is, even their powerful stomach acid cannot contend with everything that they eat, and they will often vomit up piles of indigestible material. This process may occur up to three more times before the Lydile will stop trying to reingest its own vomit.

When the lydile has finally cornered its prey (likely a dead rodent, or a bush) it will strike with ferocity!

Young and adolescent Lydiles often find themselves the victims of poachers, who harvest the fat reserves from their heads for sale. It has fantastic shock absorbing capabilities - enough to keep the dense creatures safe from themselves - and is frequently used in body armour, insulation and various herbal remedies. The poaching might be a cause for concern, if lydiles weren’t considered a loathsome pest by most every culture in the ‘verse, or if the lydiles didn’t from time to time manage to survive the process. Science cannot explain how they manage this.

Additional field notes on the lydile can be found on the Anatine Studios dev blog - Anatine-studios.tumblr.com