In Centuple Trouble, a puzzle-platformer currently in development, you assume the role of a kid searching for his 100 baby cousins (the centuplets). Bop aliens who have terraformed your world into something more dangerous--but also more fun. Use your favorite toys, such as ABC blocks, pogo sticks, taffy, skateboards, and your pet rock, to traverse the puzzles and rescue your cousins before you get into trouble!

What exactly is Centuple Trouble? In a nutshell... 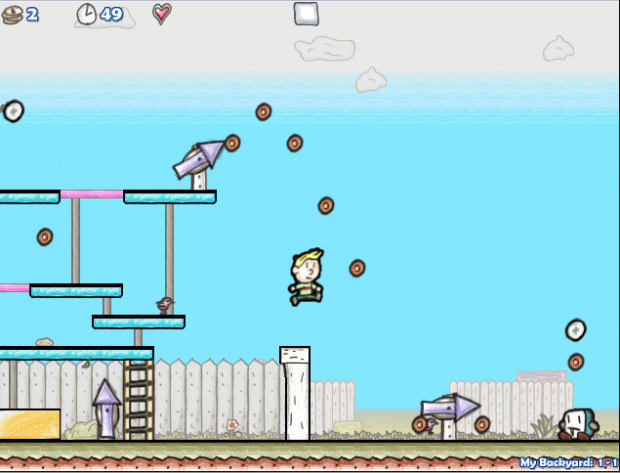 Centuple Trouble is a puzzle-platform game currently in development. As of now, it's around halfway complete. This one takes inspiration from classics such as Lode Runner, Donkey Kong '94, and Software Creation's Jetpack.

In the game, you assume the role of five-year-old Jack, who must rescue all 100 of his baby cousins from the clutches of gross aliens—who have also turned the world into a place that's much more fun for them, but much more dangerous for you and your cousins.

Not only are your cousins completely defenseless babies, but most of them are also just out of reach. You'll have to run and jump around like the hyperactive kid you are, grabbing helpful toys and dodging baddies along the way to find them. Even then, it's not so easy—you'll also have to use your noodle to overcome some mind-twisting puzzles.

Graphics are hand-drawn, reminiscent of how five-year-old Jack (the protagonist) himself would view the world. 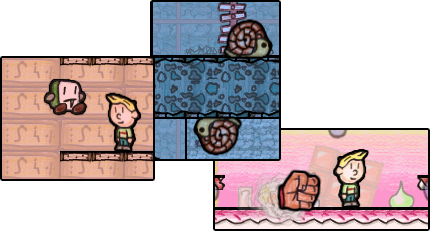 Centuple Trouble is relatively easygoing in pace, but it's not without its challenges. The object of each stage is to locate your baby cousin, then get him/her out of the stage!

What five-year-old Jack lacks in acrobatics and dedication, he makes up for in ingenuity. Rather than trekking back home with his baby cousin underneath his arm, he takes his cousin to a cannon elsewhere in the stage, which then propels his cousin home. He also makes full use of toys he comes across; whether pogo sticks, skateboards, or even his pet rock; to solve the puzzles that lay before him!

Toys are keys to your success. You'll bounce around with the pogo stick to maintain your vertical momentum. Use the skateboard to travel at high speeds and bust straight through walls and foes. Plop down an ABC block to redirect creatures or give yourself a stepping stool. Ignite some fireworks and.. well, you'll see what happens!

Along the way, he will face creatures large and small who get in his way to rescue his cousins. Although--some of them are malicious; but some are just oblivious, and they're just doing what they're gonna do. The creature that Jack will encounter most is the Ditton, who simply walks and jumps around to his heart's content. Others are out to get him! Face shocking Amperes, sentient fists, magnets, and (eventually) hulking bosses, who plan to ruin Jack's good time.

But nothing stands in the way between Jack and not getting in trouble--err, rescuing his baby cousins!

Centuple Trouble currently harnesses Flixel, the wonderful and Flash/ActionScript 3. There are plans to migrate to Haxe and HaxeFlixel. This will allow it to be deployed to platforms that are.. .. not Flash.

The game's graphics (sprites, background, and maps) are hand-drawn, scanned, and slightly tweaked. Sprites are squishy and playful, and there's a focus placed on distinguishing where sprites are. 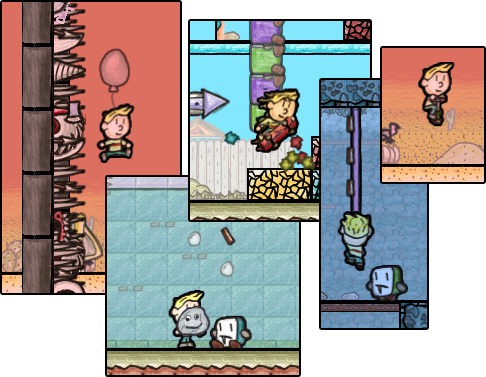 The game is meant as a cross between a puzzler and a platformer, with some emphasis on the latter. For example, many platformer-style puzzle games give the player one chance--when hit by a monster or lava trap, the player's kaput. Centuple Trouble graciously offers you two hits before Jack bites the dust. But no health refills!

There will be many, many stages, but they are each short and self-contained. They can be completed in less than a minute apiece--if one knows how to do it. But there are extras involved in collecting all of the loose change in a stage, passing without getting hit, and rescuing your cousin in a timely manner.

The game intends to provide "perfect information" to the player so that he can see what's coming and plan for it. Though many stages span across multiple screens, the player can view the entire stage to see what lies ahead. Creatures move deterministically rather than randomly. And so on.

Jack's world is a branching one, with many stages opening up several paths. If Jack can't quite get one path down, then, he has another one that he can try.

Simplicity. Most likely nothing in the way of, say, leaderboards or Steam achievements. And the game will be free.

Of 100+ stages, 36 are officially on the map: four worlds at 10 levels apiece, (currently) minus boss stages. 10 more stages have been designed. The basic game engine is essentially feature-complete, though additions and tweaks will be inevitable.

I hope that you enjoy riding this roller coaster as much as I have enjoyed making it. Go rescue some cousins! 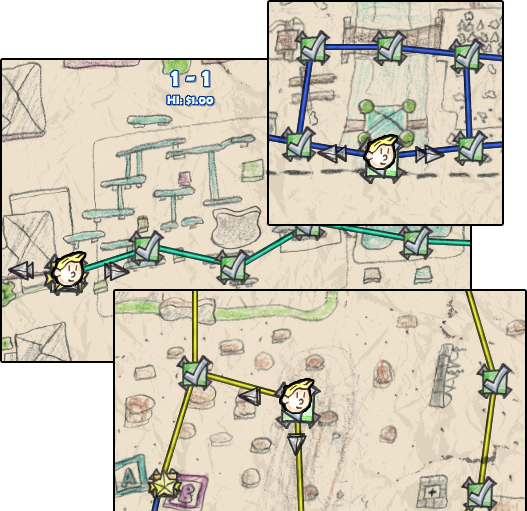