Arenas is a new permanent game mode coming to Apex Legends as part of the upcoming Legacy update. It condenses the chaos of 20-squad Battle Royale matches down into more focused 3v3 combat. You'll face off against the enemy without any other squads coming to crash the party-allowing you to focus on surviving and winning the fight. You'll compete over multiple rounds, striving to be the last squad standing each time.

Before every round starts, you'll use materials earned during the previous round to get and upgrade weapons, as well as ordnance and healing supplies. 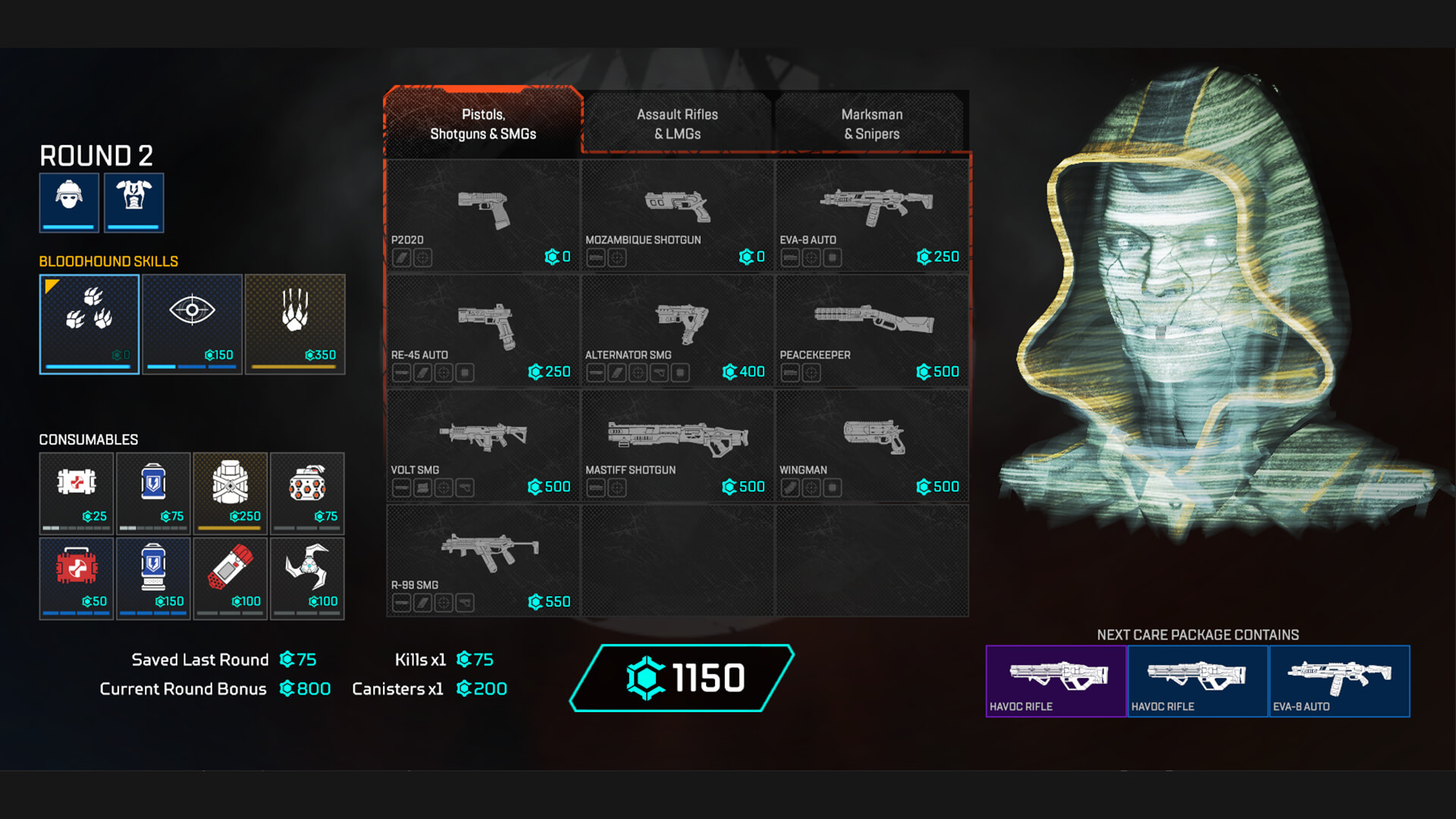 After customizing your loadout and preparing for the round, you'll jump straight into the action with your gear.

If you're eliminated in a round, your squadmates won't be able to respawn you, but you'll be ready to fight again at the start of the next round. Of course, you can still revive knocked teammates. Rounds are won when you kill all players on the enemy squad. Then the next round begins, and the cycle repeats until an overall match winner is crowned.

To win an Arenas match, you need to win at least three rounds and be ahead of the enemy team by two points. Let's talk about what that looks like in practice!

The easiest way is to win three rounds without dropping more than one round to your opponent. In other words, go 3-0 or 3-1 and the match is over.

However, if your opponent is able to win at least two rounds, things get interesting. You'll have to pull ahead by two full rounds to win. Going 3-2 or 4-3 won't cut it. Instead, you'll have to go 4-2 or 5-3 to secure victory. Rounds will continue until one team pulls ahead by two rounds. If this continues all the way to the ninth round (by going 4-4) the game kicks into sudden death mode. Whoever wins round nine takes home all the glory. 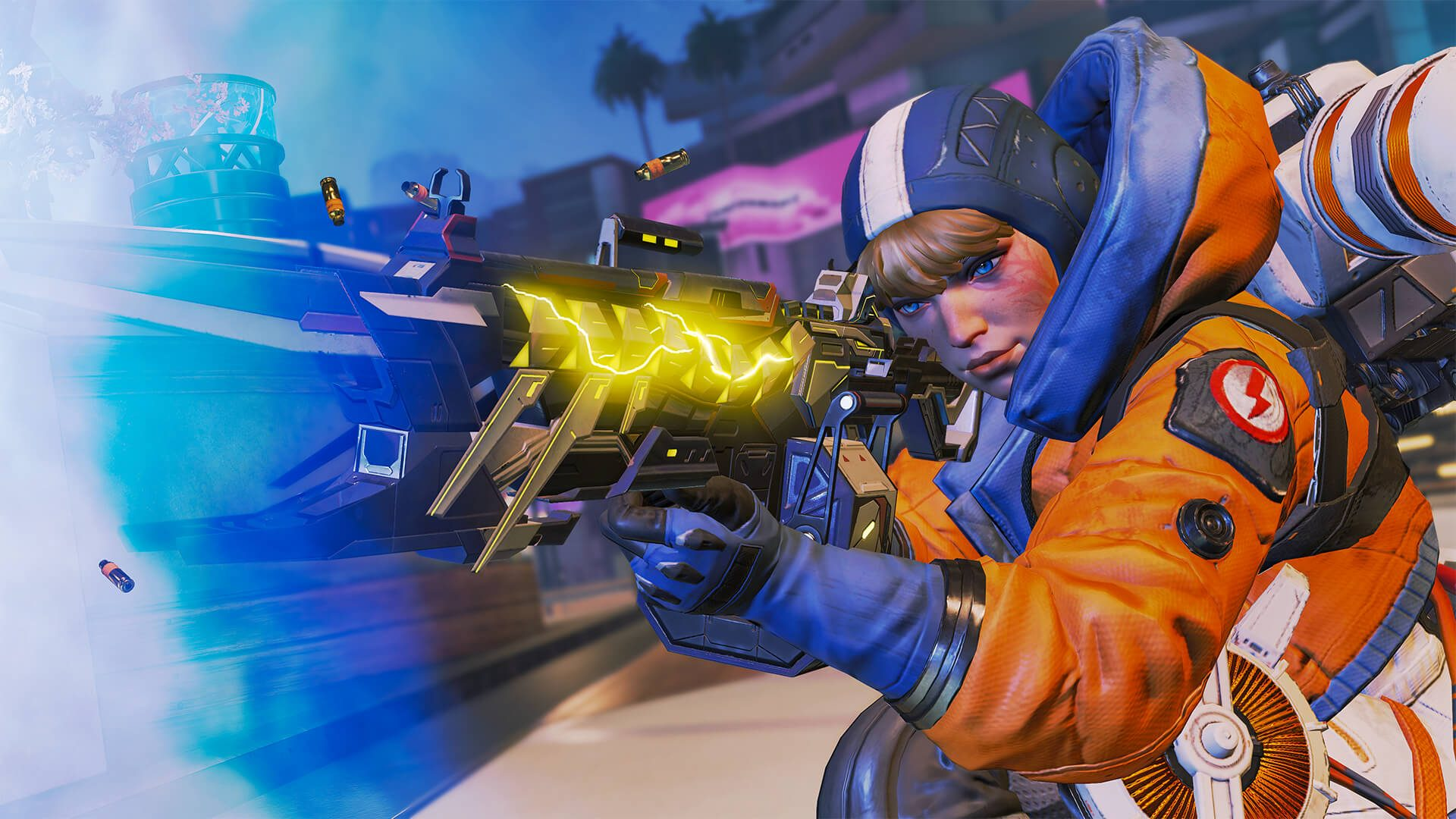 Originally we had a “best of 7” rounds system for determining wins in Arenas, but we kept seeing a lot of 4-0 or 0-4 blowouts. These felt terrible for the losing side, and sort of boring for the winners. Our new ruleset takes a bit of getting used to, but prevents total blowout games from dragging on for too long. It also lets more competitive games keep the heat going for longer, and give teams a chance to come back and win!

You can keep easy track of your progress by checking the scoreboard in the top-center of the screen on the buy menu. The score widget turns blue when your team is one round away from winning, red when the enemy team is close, and yellow when it’s a tiebreaker The little pips in the center of the widget count the number of tiebreaker rounds that have occurred—the third tiebreaker means sudden death.

GEAR UP FOR BATTLE

Win or lose, each round starts fresh with base equipment and some materials to use. Decide how you want to approach the upcoming round by using your materials to get weapons, upgrade them, and pick up any additional supplies you need. The bar is raised every round as more materials are awarded than the previous round, giving you more options and letting you upgrade further as the match progresses. (Don’t worry, materials can’t be purchased—you’ve got to earn them by playing and completing rounds.)

Getting a weapon gives you the base gun with no attachments. Weapons can be upgraded to white, then blue and finally purple. Upgrading a weapon equips it with all available attachments of that tier. Fully upgrading to purple will fill out the hop-up slot for weapons that have one. Select your preferred optic for each weapon. Upgrading unlocks additional optics for that weapon.

Weapons don’t carry over from round to round—this was something we debated and ultimately we decided on this design for two reasons: 1) to free players up to swap weapons freely between rounds, and 2) to prevent matches from snowballing too hard after one or two rounds.

Use your Ultimate and Tactical abilities wisely, as you’ll have a limited number of uses each round, instead of recharging indefinitely like other modes. Legends start with some Tactical charges, but additional charges and Ultimate abilities can be purchased with materials when customizing your loadout. This allows more Legends to be made viable in Arenas, and forces characters with very strong tacticals (like Bloodhound) to make choices between weapon upgrades or more tactical charges.

Don’t worry, unused Ultimate and Tactical charges will carry over to the next round.

You’ll have limited time to prepare, after which the round will start! Matches take place in some familiar locations, as well as new ones. Scattered around the area, you’ll find some supply bins with healing items and a few material canisters. If a canister is collected, it will award everyone on your squad 200 bonus materials to be spent in the next round. Killing an enemy awards you 75 bonus materials and their items drop directly to the floor for quick and easy looting. 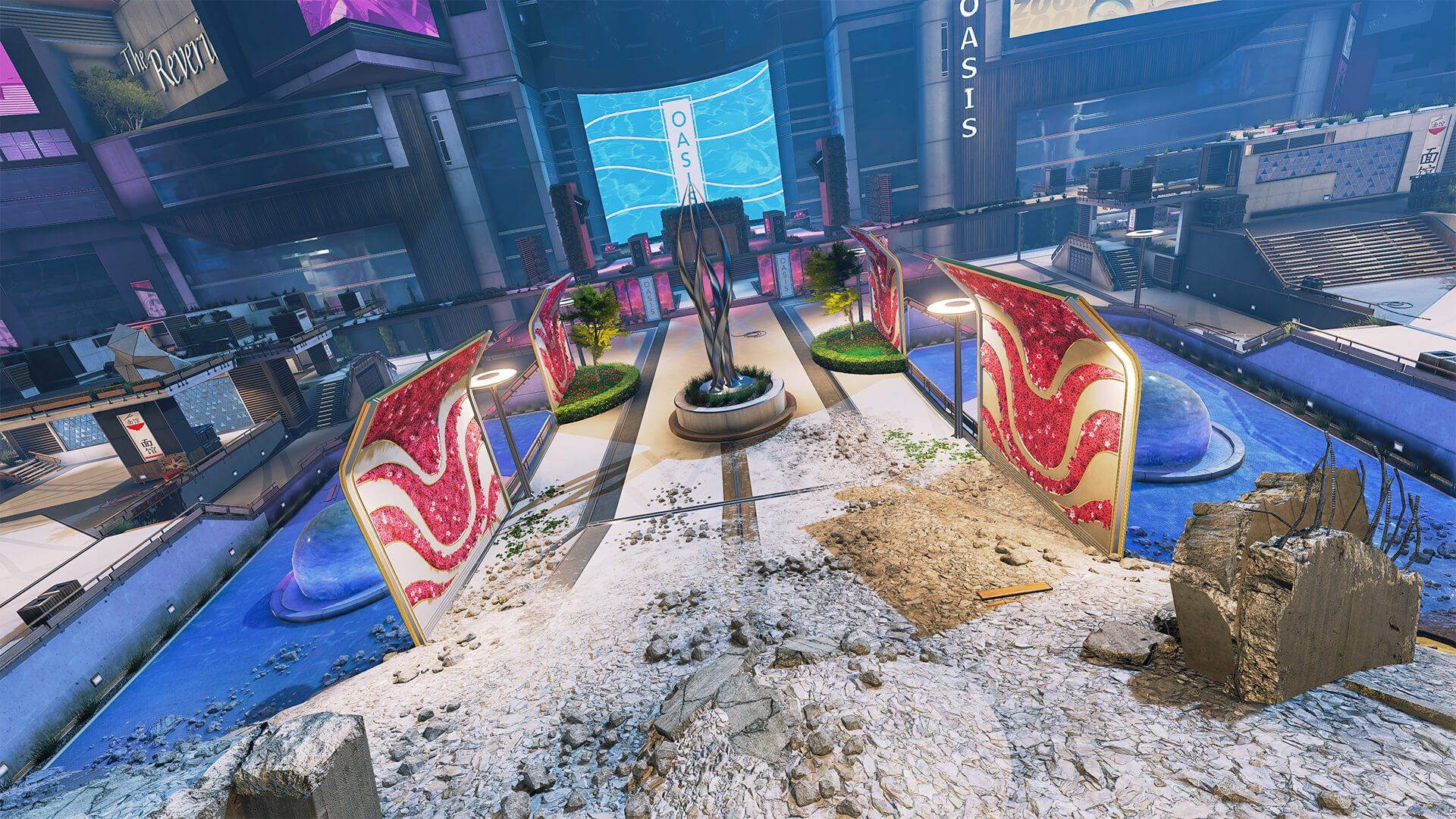 You’ll be fighting in a mix of custom maps and existing BR locations from within Kings Canyon, World’s Edge, and Olympus. The design goal for custom maps is to emulate the tactics and strategies used in BR within a symmetrical, competitive space. Arenas is first and foremost about proactive combat and that means creating spaces that give you plenty of room to analyze the other team, make meaningful choices, and utilize your Legend’s capabilities to come out on top. With the Legacy update, we’ll launch with two custom maps, with more coming in the future. 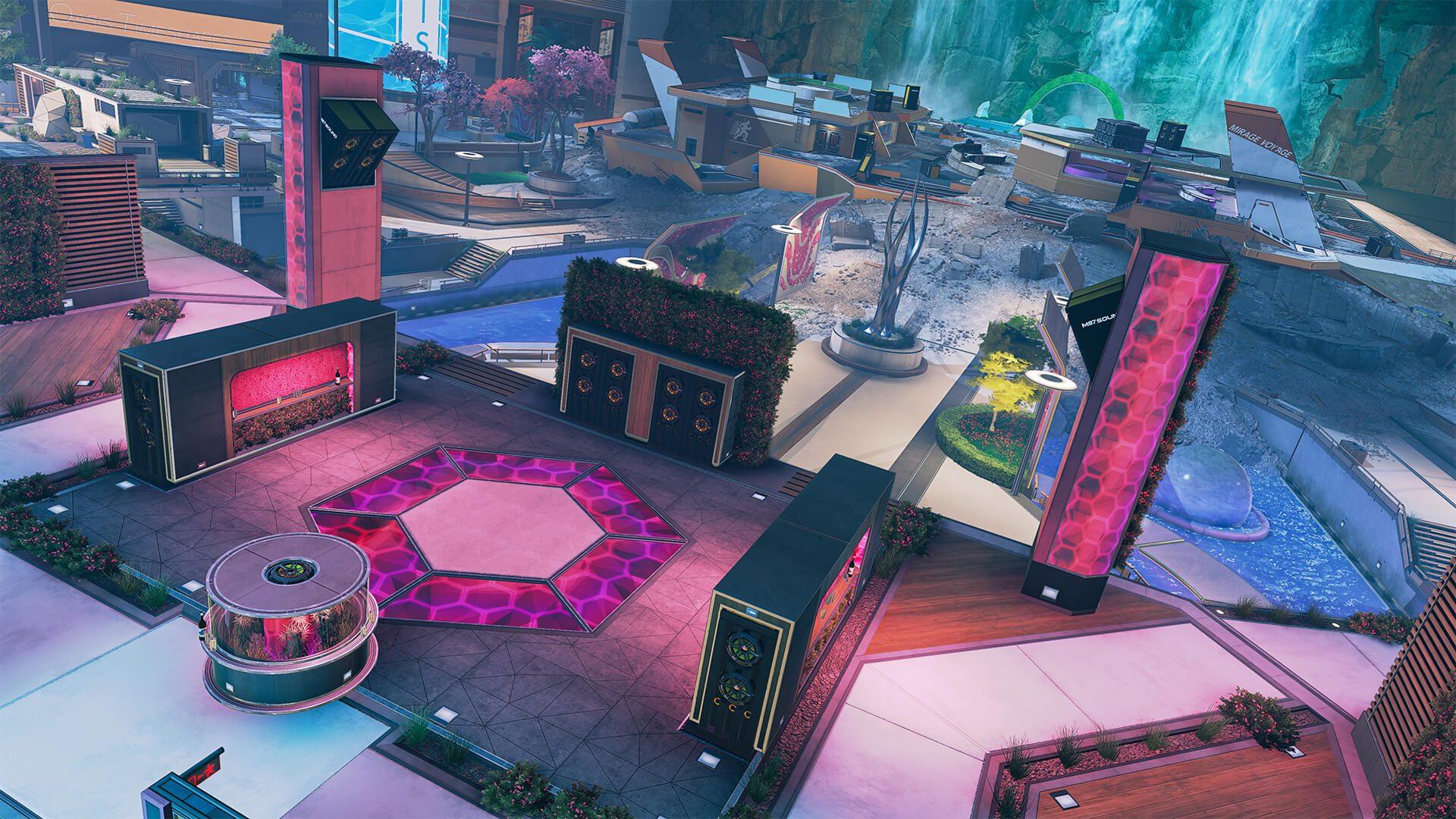 Mirage lost control of his ship and crashed it into a downtown plaza. Typical, right?

Party Crasher takes place in a luxurious, downtown plaza where players can choose to engage on the crashed Voyage, or the opulent two story buildings that make up the plaza. The map is varied, with each side playing to different strengths and offering a wide range of options.

The downtown plaza is well connected, pushing players to make quick decisions within its many flanking options, while the Voyage sits up high, offering great sightlines and elevated positions for those that wish to play from further distances. 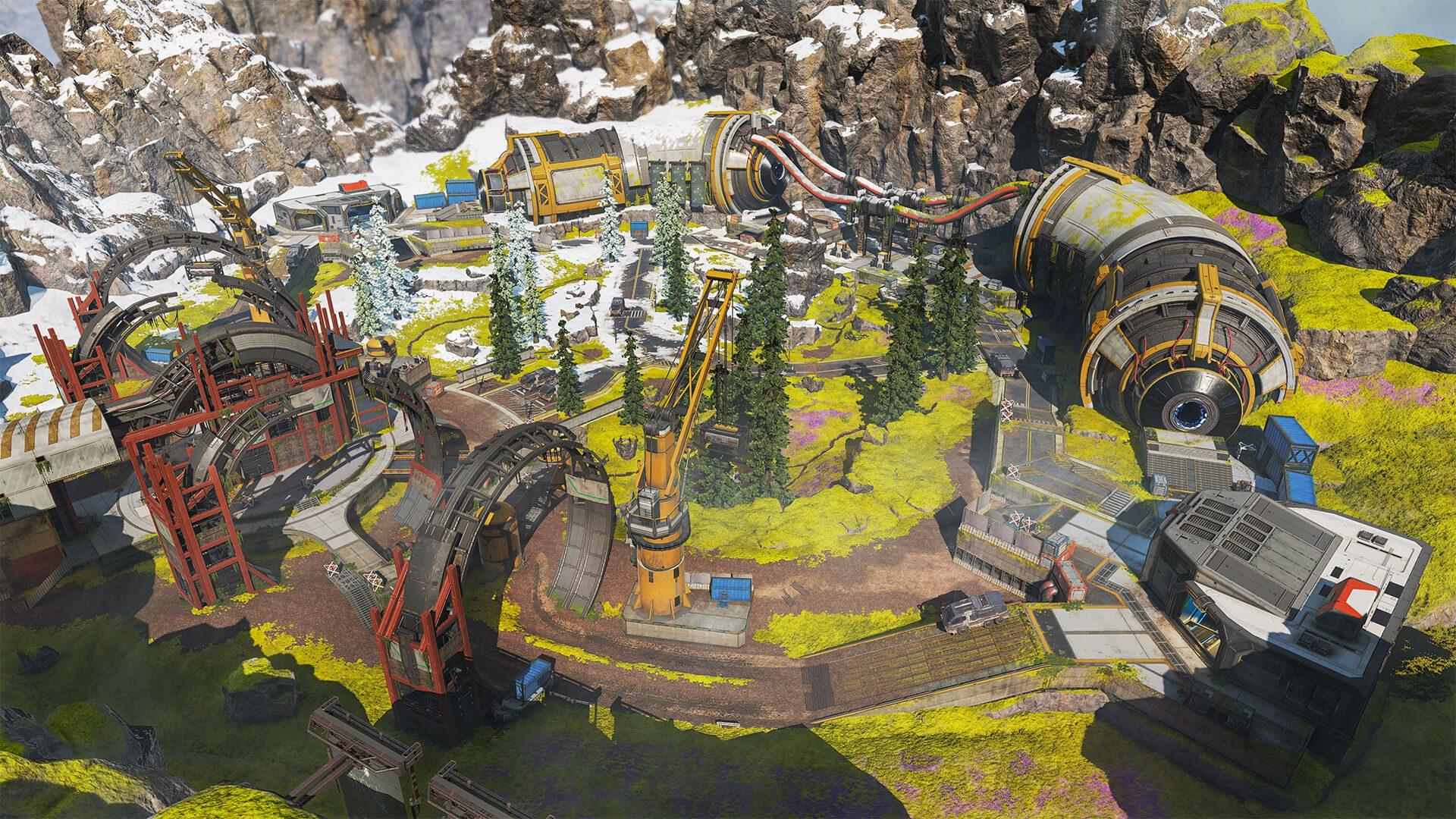 The Phase Runner on Olympus is unique, but it wasn’t the first of its kind.

Phase Runner is a hidden, experimental zone at the peak of a mountain. The large center is very open, offering plenty of long sightlines to find your enemy. This contrasts the industrial points of interests, which focuses combat to be mid/close range. From either spawn, players can take the prototype phase runner to gain almost immediate access to an area and begin combat quickly. Construction wasn't completed on the other side, so players will fight through the abandoned space that offers various engagement ranges and multiple flanking options. 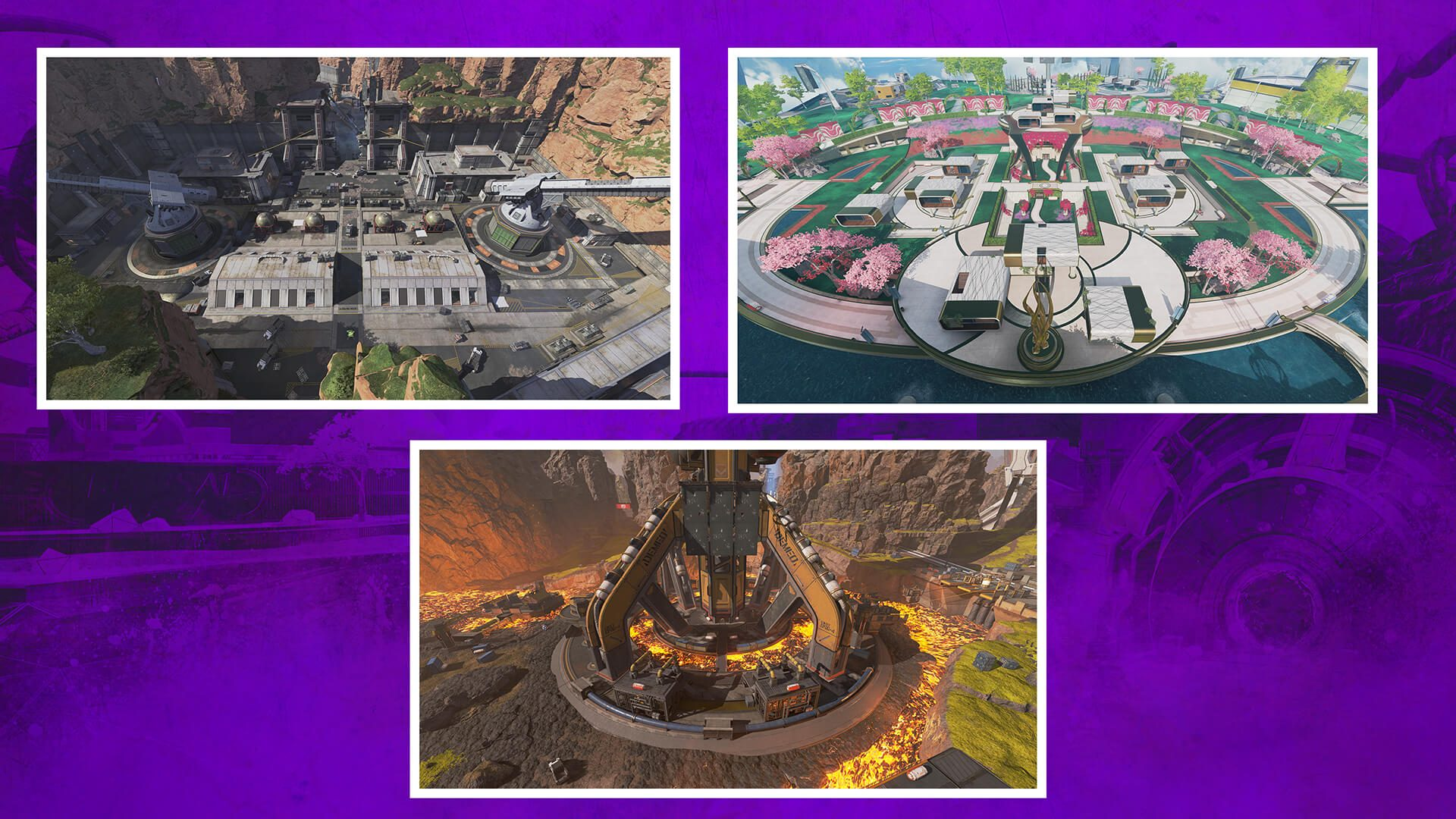 In addition to the two new maps, other areas from our three BR maps will be thrown into a bi-weekly rotation, giving you five maps total for Arenas. At the start you’ll get Artillery from Kings Canyon, Thermal Station from World’s Edge, and Golden Gardens from Olympus.

In addition to the two new maps, other areas from our three BR maps will be thrown into a bi-weekly rotation, giving you five maps total for Arenas. At the start you’ll get Artillery from Kings Canyon, Thermal Station from World’s Edge, and Golden Gardens from Olympus.

BECOME A LEGEND OF THE ARENA

You’ll now be able to level up your Battle Pass in both Battle Royale modes and Arenas. Challenges will now be either general (achievable while playing both Arenas and BR) or specific to one of the game modes.

Since we know some of you may only want to play one mode or the other, you can re-roll daily Challenges and choose for the new challenge to be for Arenas or Battle Royale. We’ve also made the first re-roll of the day free (additional ones still cost Legend tokens). We hope that—as with the rest of the Challenges system—this change strikes a balance between encouraging experimentation and allowing you to play your way.

Take your time, learn the ropes, and get your feet wet in the Arenas. We’ll continue to add more features like Ranked in future updates.