Just like walking in the park... filled with monsters with big teeth and sharp blades. Uh-oh!

There's a new monster called UltraPony. My idea was to make the head look like a Stapler, and turns out Staplers look like Aliens. There are 3 versions of them. Basic and Invisible are about the same, just the other one is difficult to see. They run fast, jump long distances and try to hit you with their blades. At close range they can bite. The Stone versions are bigger and have more health. They're slower and don't jump much, but they can projectile vomit acid, and their melee damage is higher.

There are also 3 new weapons. BoltBlaster is a ranged start weapon with unlimited ammo. The bolts can bounce once. Vulcan Cannon is an improved Machine Gun, it fires 2x faster. It requires 1 Energy Cell every 20 shots, otherwise it gets slower. Anti-Tank Rifle fires Shells at high velocity, which can penetrate multiple enemies. It uses 2 Energy Cells every shot. When fired without the cells, the projectiles have less velocity.

It seems I forgot to use the BoltBlaster in the videos, but at least this time I had player's shadow on!

The game has some spooky ambient sounds now. Most of them were scavenged from my old projects. The UltraPony sound effects were about 11 years old, and they didn't even need much improvements. They were done from recordings of me eating some crunchy hard candies and rattling the plastic bag. Improved the Nailer and Player sounds too. The weapon and ammo pickup sounds could be better, maybe some EQ will fix them.

I also got some more of these sort of tech textures in my oldest project. They may need some polish before I use them. Could do some more of them. They're pretty fun and easy to do. My technique is to create random noise, smudge it to have some kind of line patterns, and then start copy/pasting interesting parts from it to form the tech stuff.

There's also a new night sky. I'm getting the feeling that I should render the skies at higher resolution. The brightness/contrast look pretty ok now, so they have more color bands in them, but the resolution just doesn't look the same as the level textures. 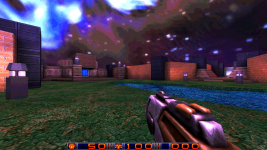 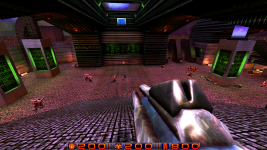 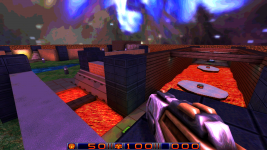 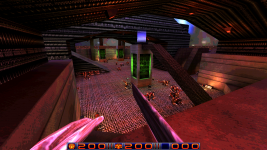 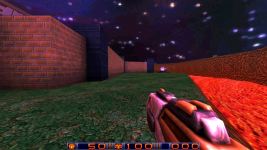 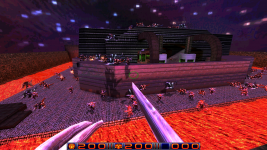 The game has a Quake like Start level with difficulty selection challenges. They're all quite simple, but give players some idea what to expect later in the game. Nightmare difficulty is hidden somewhere, but otherwise isn't that difficult to get to, basically means you need to be able to find the secrets to survive. There could also be a Baby skill for those who can't even handle Easy.

At the moment player can easily get out of the playarea, with some jump glitches or rocket jumps. There's some area around the playarea with teleporters and a lavapit. It's better that you get into this sort area if you get out of the playarea, than to get on top of some border wall and be blocked by the sky. Though the air control allows player to run up any slope, and the border walls behind the lava pit are sloped. Need to do something about all the jump stuff.

Active telepads have a volumetric glow. Receive only telepads just have a weak blue light. There should be two way telepads too. Level exit portals are those bigger square Stargate like things. I'll change the exit portals if I think of something better.