Ok, we have to admit something. "Slums" is a buzzword created by our designers. There are no "slums" in Warsaw City. How do we call this location in our game? A mushroom. A mushroom of workers building Warsaw City.

Posted by wojdylakrzysztof on Mar 4th, 2021

The real "slums" of Warsaw is the Undercity. Ground Cleaners clean the ruins of the old Warsaw. This is where the outcasts live, some of them using technological advances, but most are often cut off from the grid. They have their own language, their tribes, use night vision equipment to see better, and are generally hostile to possible "guests" from above.

Check out this piece of art by Marcin Jakubowski. It is an illustration created for the second book of the Gamedec saga - Locomotive Salesmen. 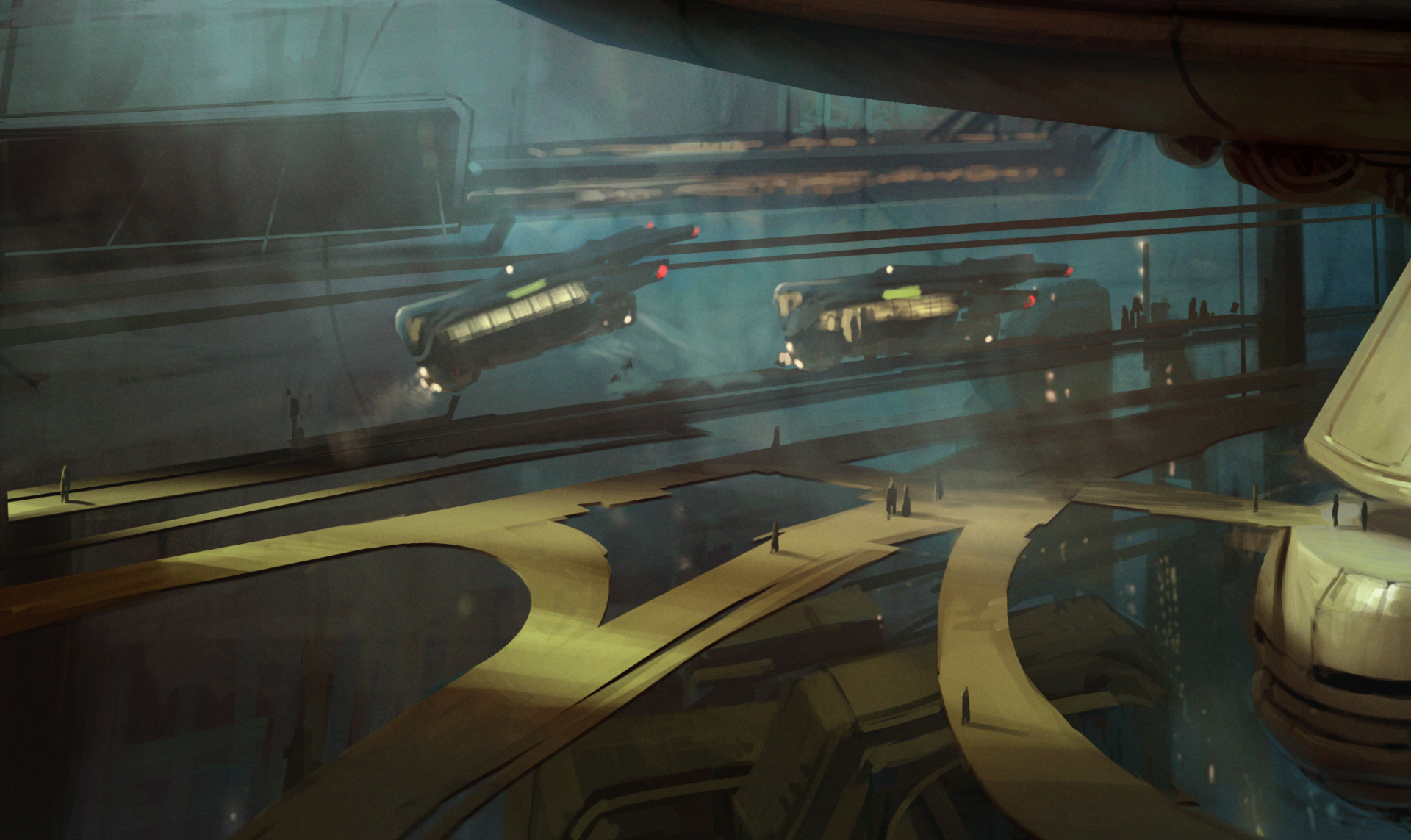 Let's check our in-game codex for more details about this particular area:

„The authorities realized that new cities, capable of housing tens of millions of people, needed to be built. Vertical cities. Fields. Projects of giant towers already existed at that time (like New Tokyo), so there was something to build on.

The towers' construction problem was that for their foundations, large quarters of Warsaw had to be demolished, which met with apparent protest from the indigenous inhabitants.
Workers originating from the capital refused to work in most cases. However, some immigrant professionals undertook the effort. And they were hated for this. There were acts of hostility. Assaults, casualties. The companies erecting the towers were forced to create workers' habitats on "mushroom" - structures challenging to access by ordinary residents.

Try to imagine structures resembling tall toadstools erected in demolished neighborhoods, surrounded by a surging, angry mob. Now imagine the foundations of massive towers rising beside them.
Now the mushrooms stand abandoned in great towers of gigantic cities. Their finials (hats) are below the lowest walkways of the city. They are often uninhabited because undercity savages don't know how to climb them, and no one else wants to fly there. However, suppose someone flies up to such a mushroom. In that case, he will see a strange, old structure (130 years old), which is decorated with various "additives" - pieces of stained-glass windows of churches and different other architectural elements from the old Warsaw. 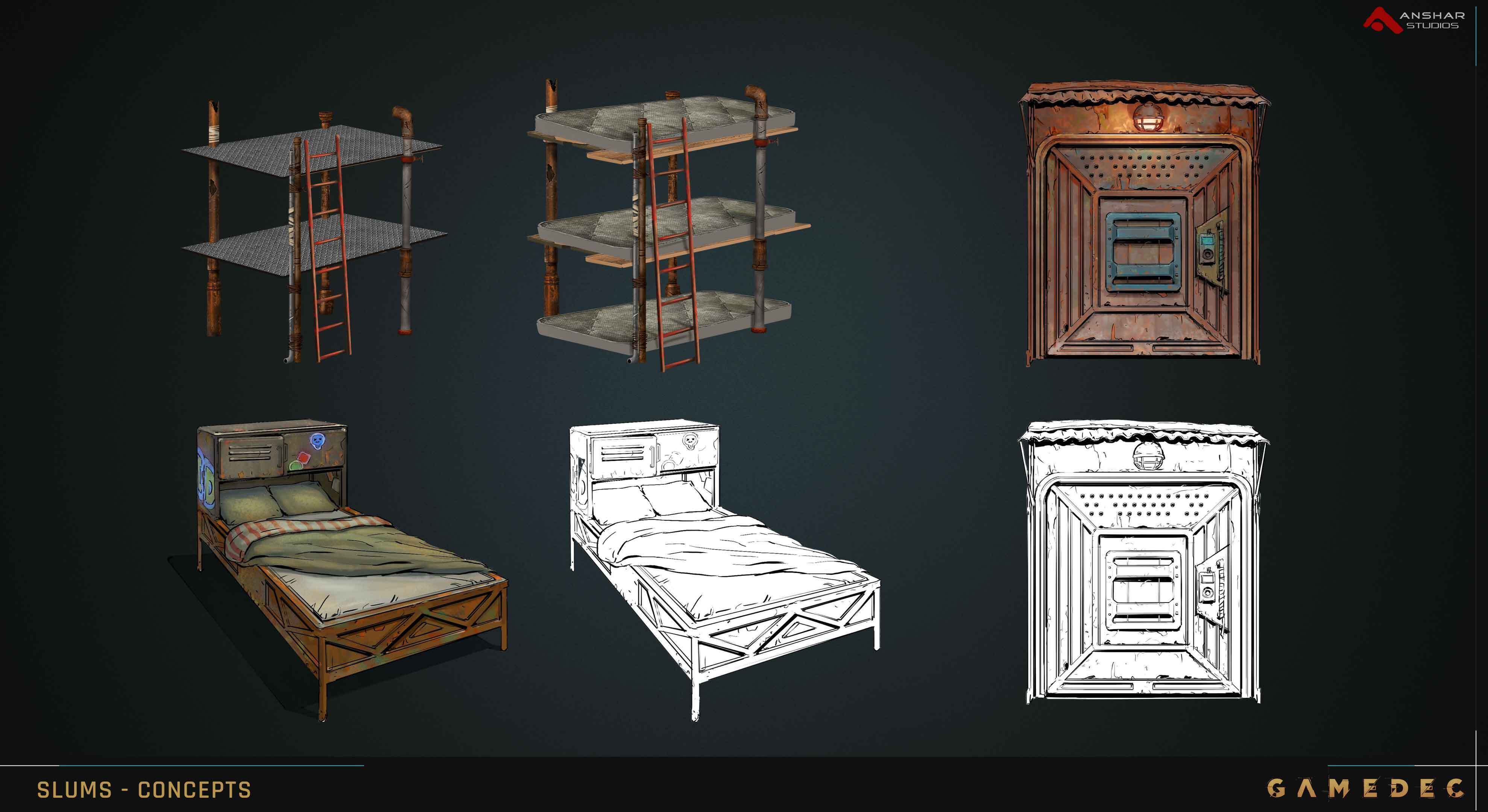 The towers' builders took revenge in this way and played off the hatred that the old inhabitants of Warsaw had for them. Inside they are ordinary habitats, something like workers' bedrooms: beds, furniture, kitchens. If someone arranged themselves there, they didn't pay the rent because it was a space, not wanted by anyone. They can put their furniture there, their beds, and so on.

"Slums" are also sometimes called low parts of sidewalks that no one visits. Temporary or more permanent concentrations of vagrants and homeless people can form there. They make shelters to protect themselves from the dirty rains, but they do not stay there, chased away by the police.
The history behind the 22nd century Warsaw City is one of a kind, but what about people who usually live in the "slums"?

We have another codex entry that might interest all of you:

„Report from the psychological study

Study group: children and adolescents aged 7-17, raised without parents, on the sidewalks of the Low City, living without a roof over their heads for at least three years. The number of subjects: 45 children (15 girls, 30 boys).

Control group: 45 children of the same age and sex, raised in Low City in full families. The study aimed to determine the degree of alexithymia (inability to recognize and understand emotions in the interlocutor and oneself), emphasizing the interlocutor's facial expressions. Children in the study group exhibited alexithymia to a moderate to a severe degree.

A correlation was detected between the length of life "on the sidewalks" and the severity of alexithymia. In extreme cases (five boys, aged 11, 12, 13, 15, and 16 years and one girl, aged 16 years), the subjects were only able to recognize the threatening" and "non-threatening" faces on the holograms presented to them. They could not distinguish between faces expressing disgust, fear, anger, curiosity, and shame. They identified them all as "threatening." They identified faces representing joy as "non-threatening." 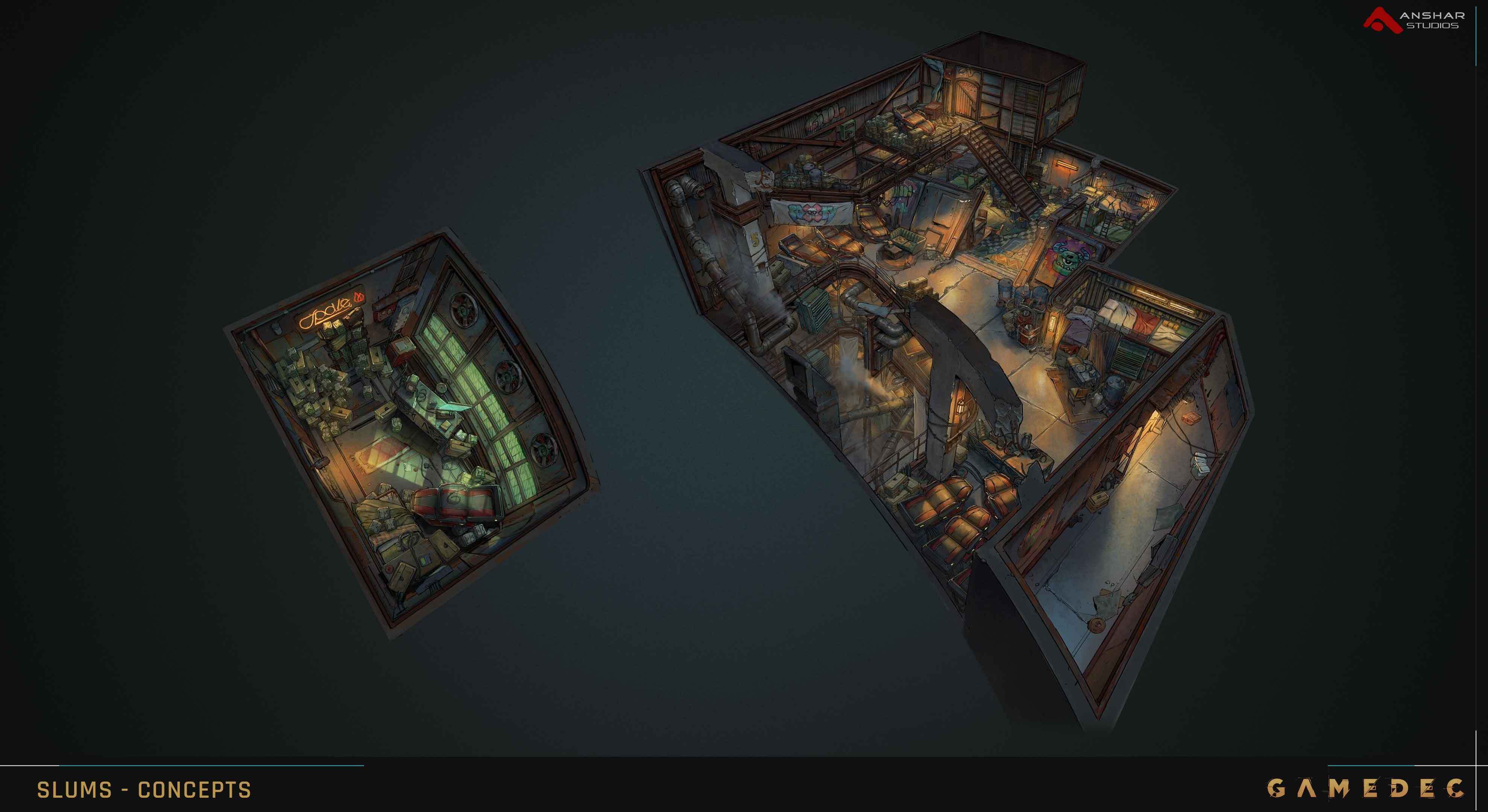 Declarative tests showed that these children, having detected a "non-threatening" face, needed to exploit its possessor: to transact with him (typical statements: "I would sell him some crap", "I would buy something from him on the cheap"), to extract information from him or any resource that can be monetized.'

There was an observation of marked involution of brain areas responsible for feeling guilt or shame. Respondents asked if they would be able to deceive the holder of a "non-threatening face" declared "yes" without fear. When asked if they would feel bad afterward, they answered in the negative ("He would blame himself", "It's not my fault the bream", "He would do the same", "Everyone does it", "It's the law of the sidewalk").

Twenty children (seventeen boys and three girls) grouped disgust and anger into one facial expression, embarrassment and curiosity. At the same time, they placed joy in a third set, but, like the first group, graded them as "very threatening," "perhaps not threatening," and "not threatening."

The remaining group (nineteen respondents, eleven girls, and eight boys) showed moderate alexithymia when recognizing facial expressions: they mainly mistook disgust for anger, while, like all previous groups, its members found it difficult to identify their feelings. 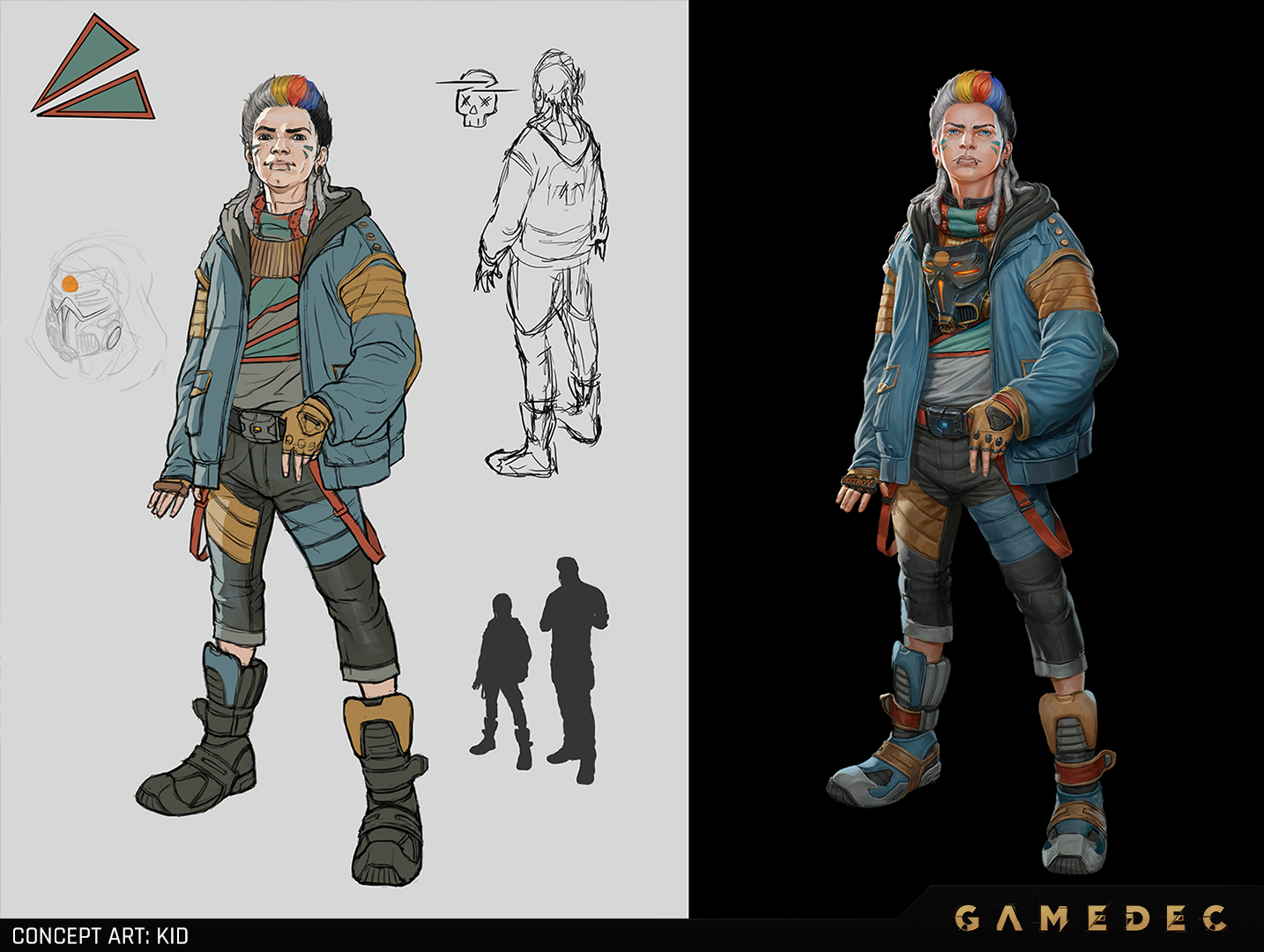 Living alone in the lower areas of Low City, especially for minors without adult supervision, drives the compulsion to survive in hostile conditions, and the lack of positive social interaction results in the formation of the "psychopath syndrome." It is a set of traits consisting of an inability to identify and understand one's own and others' emotions, a lack of guilt when harming someone, and the subjective treatment of people encountered.

The authorities of Free Europe should begin to contribute to the education and care of young, homeless citizens of polis because they are the ideal fry for criminal organizations and can pose a real threat to the safety of themselves and other residents of Low City.”

As you can see, Warsaw City is full of various social and historical stories just waiting for you to be discovered! How did you find our article? Would you like to read more about the history of what happened to people between the 21st and 22nd centuries?

If you're interested in Gamedec, an upcoming cyberpunk isometric RPG, join our Discord channel and share your thoughts!