Hi everyone! We're delighted to introduce to you today our first expansion, Interstellar Space: Genesis - Natural Law! With our first expansion, our objective was to really infuse the galaxy with a great deal more variety and flavor. To do that, we knew we would need to introduce some more friendly, and potentially not so friendly, faces. As 4X fans ourselves, we knew there was no better way to do that than through the introduction of two new races to the game, as for many new rulers and...

As we approach this milestone, we'd like to reflect on just how different the game you played at release in 2019 is from the game you'll soon be playing in the 1.2 update. From the eye catching graphical changes we made in the 1.1 overhaul, to the numerous new features and gameplay additions we've introduced, things have certainly come a long way so far. We absolutely couldn't have gotten here without the support, encouragement, and great ideas of our fans. You've truly helped make the game a better one.

With our first expansion, our objective was to really infuse the galaxy with a great deal more variety and flavor. To do that, we knew we would need to introduce some more friendly, and potentially not so friendly, faces. As 4X fans ourselves, we knew there was no better way to do that than through the introduction of a new race to the game. 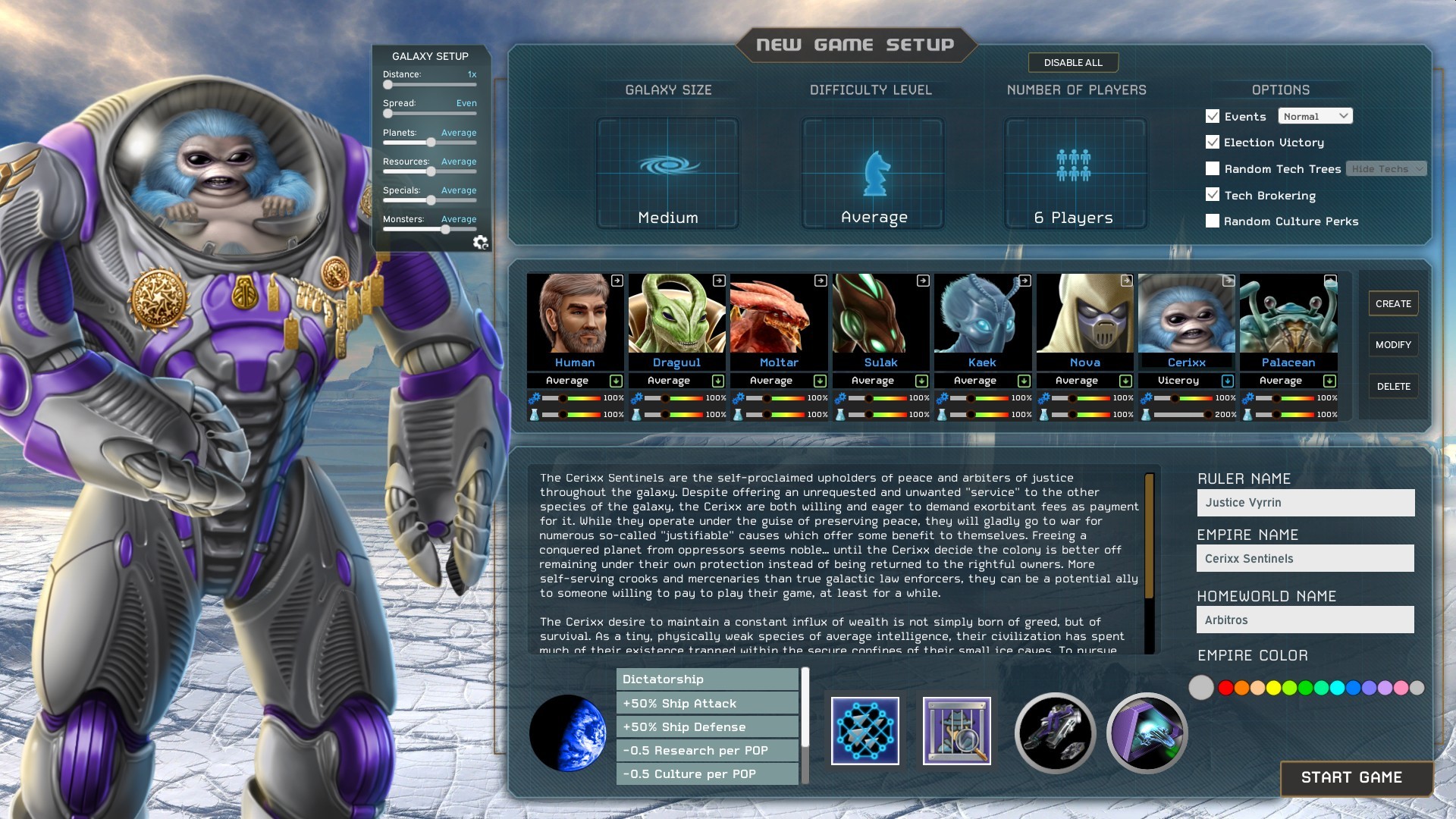 We here at Praxis Games couldn't just stop at one new race though. We wanted to offer two brand new races. As a result, and now for the first time, Natural Law will allow you to play eight player games filled with distinctly different looking alien races. We're also delighted you'll be able to use them to take full advantage of the larger galaxy size and spacing we added by popular demand in one of our post-release updates.

Every race in ISG comes with a host of features and the Palacean and Cerixx are certainly no exception. Each comes with a set of fully animated characters, animated fleets (with variant models for most ships hulls), custom civilian buildings, and a colony headquarters. They also have brand new diplomatic music tracks and dialog which are thematically tied to their unique sense of style. It is with thanks to our wonderful and talented artists that these races really come to life. 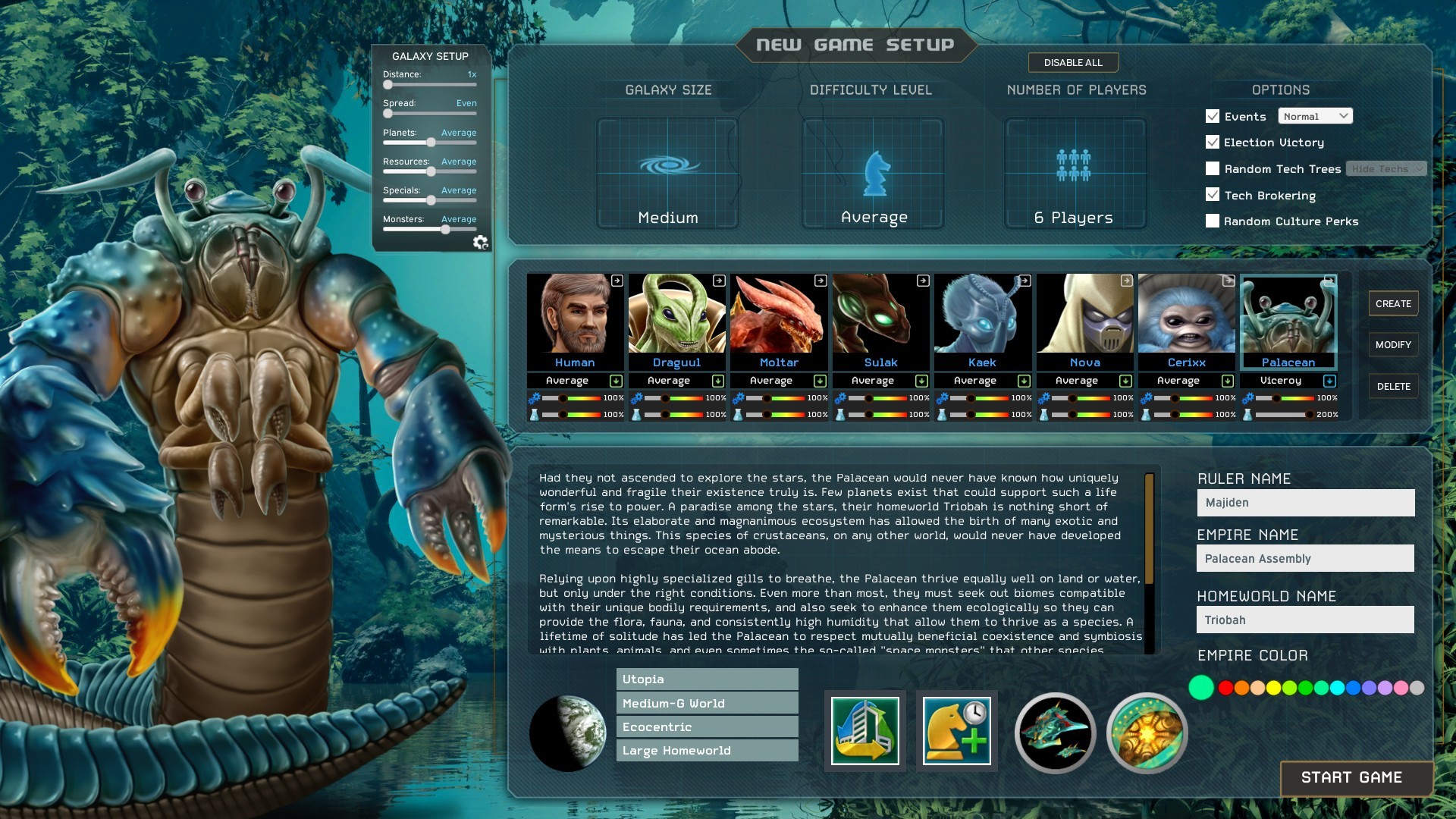 Let's not forget the new mechanics each race brings to the fray either. Each race has two brand new unique abilities as well as a new titan ability. One of the new races, the Palacean, also brings a brand new trait into the game, Ecocentric, which starts their homeworld off as an ecological paradise among the stars. All of these features will also be fully usable with custom races for all expansion owners.

While two new races certainly bring a lot to the table, we knew there was still more we wanted to do. This is why we set out to also add a brand new ruler, each once again with a unique set of neutral, happy, and angry animations, for EVERY RACE in the game. Not just for the six base game races either, but all eight races including the Palacean and Cerixx. With these additions, we'll now have a total of 16 unique rulers in the game, more than doubling the base game's total. 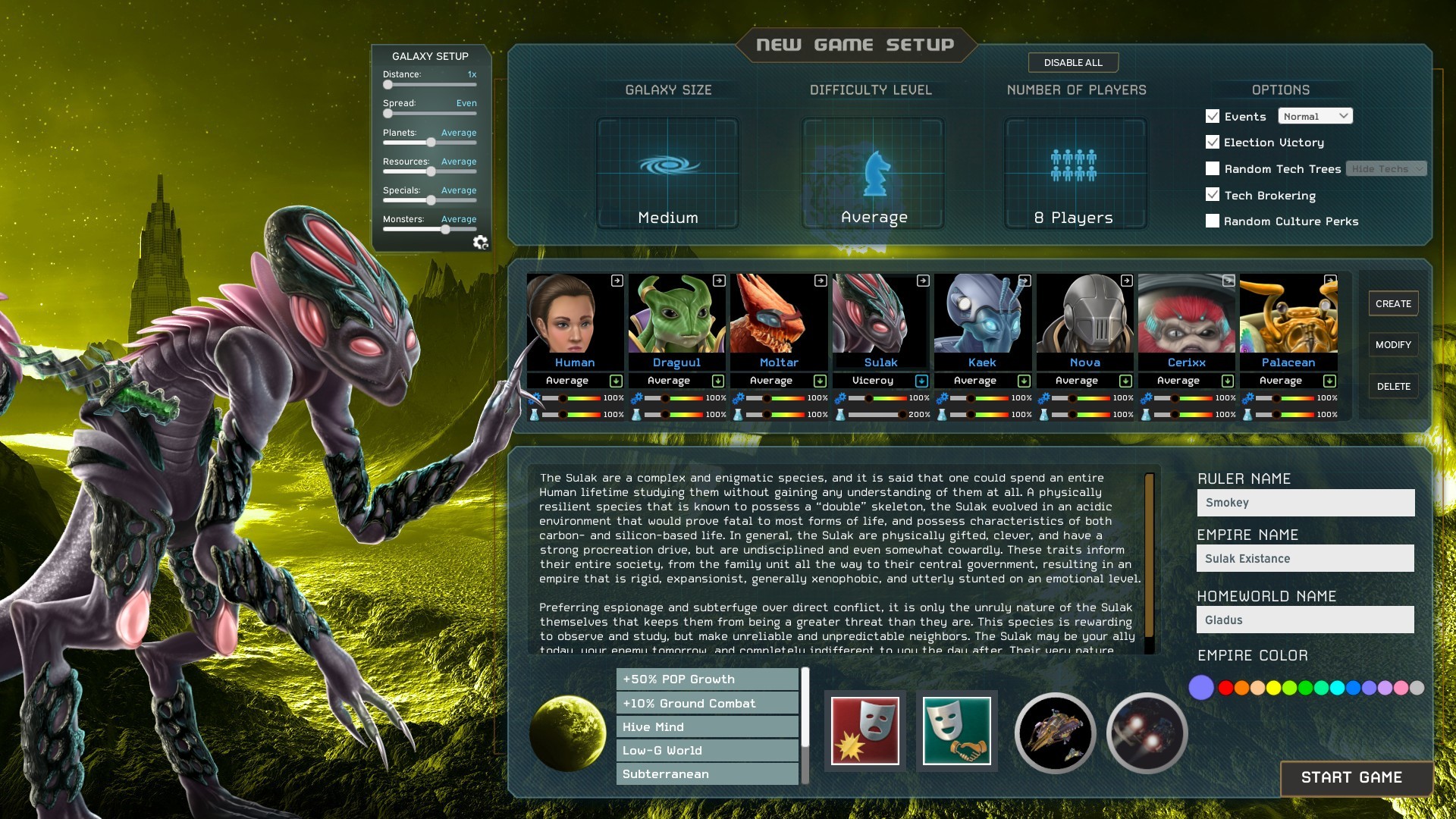 16 rulers? It's a nice number, but who wants to stop there? Not us! No, we just had to add a bonus third human ruler too, bringing our total to 17 unique rulers! Each of the nine alternate rulers is fully playable using the default races or by creating your own custom ones. Want to have three unique human empires dueling it out in your galaxy? Why not, sounds like fun to us!

What about leaders you ask? We hear you, we weren't going to let the new races miss out on that, and so we've introduced four new leaders to the game. With two from each of the new races, they are up for grabs by any empire lucky enough to get their hands on them.

In addition to the diplomatic tracks mentioned above, we've also added two more music tracks, a galaxy map track and a battle track, bringing us to a total of four new tracks to the game. Both of these can be previewed in our video trailer above. If you haven't seen it yet, definitely check it out after reading this! Also, it's worth noting that all soundtrack DLC owners will receive these new music tracks for free.

If you're interested in learning more about the new Palacean and Cerixx races, keep an eye out for our dev diaries as we approach the launch of the expansion, which will happen very soon. We'll be diving deeper into their origins and motivations, as well as their new unique abilities and titan abilities. 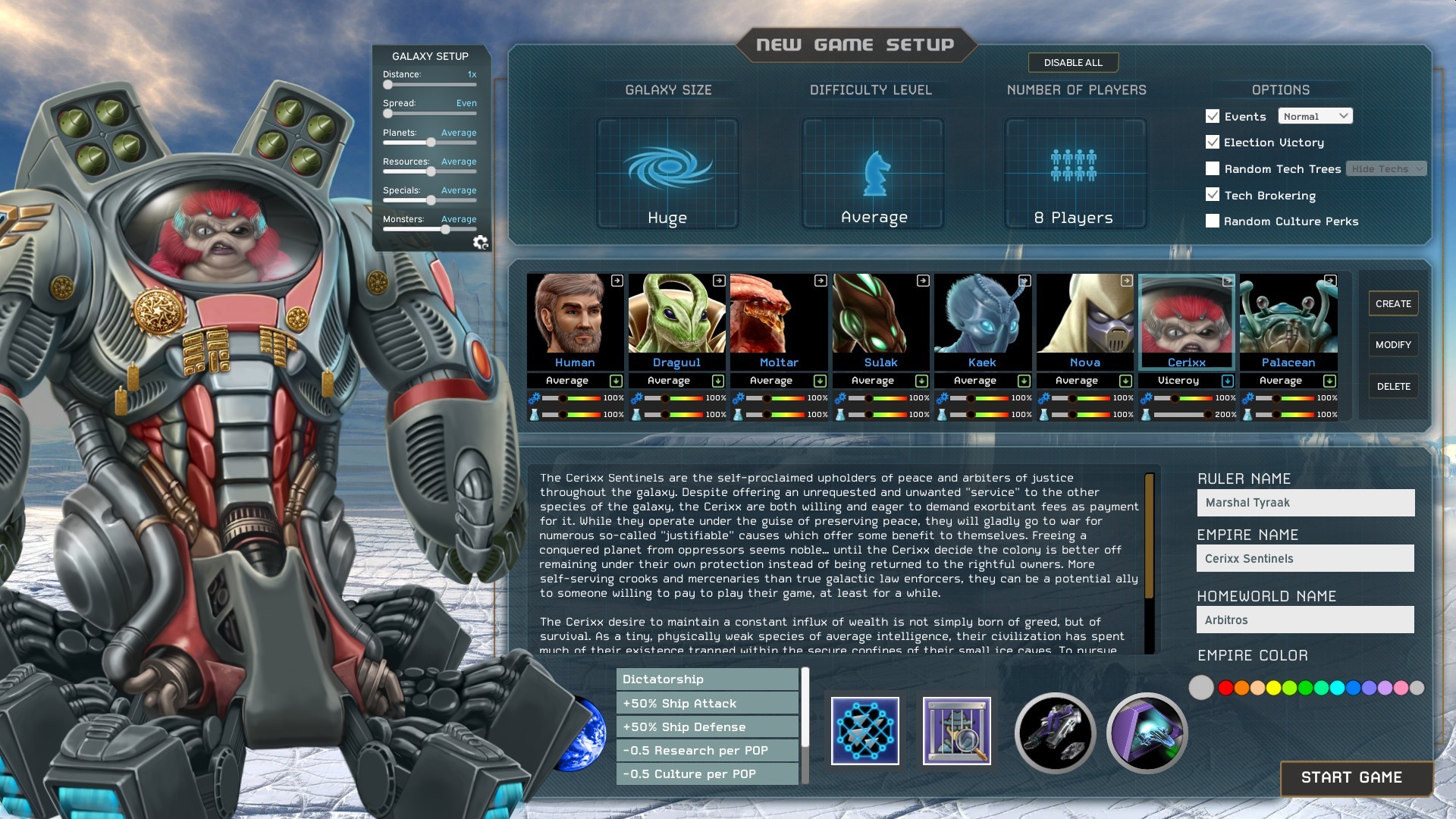 We hope you like what we've got lined up for this first expansion. If you do, please wishlist Natural Law so you'll be kept up to date on its release!

Also, we'd love to have your feedback on the game, in its current version or the 1.2 Beta if you have a chance, and see it shared with others. Thanks and please stay tuned for more coverage on Natural Law.

A very solid (if unspectacular) addition to the game. While most studios with similar games tend to milk expansions and introduce a single race only, Praxis is adding two new races in a single module. Considering the base game consists of six races, this is a very smart move.
Having played the base game extensively, I am somewhat concerned about a few things.
In this game, each race has a different preferred biome, up until now, each biome had a single race that prioritised setting colonies there. Now this will be thrown off balance. 4 races will still have minimal competition for the real-estate they prefer, while the other races will have increased competition. Generally I think the competition is actually a good thing, but it must be across the board and not selective if good game balance is to be maintained.
Another concern is the ratio of heroes. Before we saw 41 heroes available for 6 races, or almost 7 heroes available on average per race. The expansion will give 45 heroes available for 8 races, or a bit over 5 per race. I expect some players will complain as these heroes are not only fleet and colony leaders, but act as spies as well.
Overall, the additional Faction rulers, 2 new races, 4 new heroes, new music tracks,etc... make this expansion a must for for current fans.
Now if we could see some additional victory conditions, quest-like events, and a campaign type menace in the future... well That would make ISG the best TBS 4X game to come out in decades.

Tried to search on YT for a ISG combat video, but everybody is focusing on non-combat in their 1.2 gameplays, which I find boring.

Not a video, but I can give you a quick description.
You drop out of warp in a loose and random formation, you are not lined up like Infantry during the civil war. The mechanic is IGOUGO but, going first is not a huge advantage as in other games (has to do with weapons range versus starting position).
Fleet leaders can give you very nice boosts in combat and turn a narrow defeat into victory. You also have some cool toys such as weapon overload, shield facing, weapons arcs, and overheat. While there is no tactical terrain to speak of, I am actually amazed at how much tactics do play a role in combat. Most importantly, if you're clever enough, you can pull an Admiral Thrawn and beat superior odds.
Overall, it works extremely well.