Introducing the many kinds of object info windows, which are now animated for extra cool factor.

The info windows have been overhauled and are now even more informative than before, made possible by smaller fonts.

Before they were just walls of text and numbers, while now we have color-coded labels and bars to help quickly weigh the advantages and drawbacks of whatever you're examining without being forced to interpret a bunch of numbers, though the numbers are there for cases where you want to know the specifics. 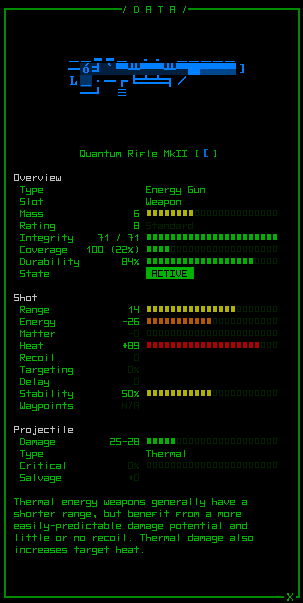 As you can see I added support for ASCII art, though it will be a daunting task to draw every item in the game. Also, since I'm working with old placeholder objects the descriptions have yet to be written, so in all screenshots the text seen at the bottom is just copied from elsewhere/old data.

Colors reflecting percentages have a uniform meaning throughout the interface, equally dividing green, yellow, orange, red into quarter percentiles. (This will be important later on with the hacking interface, as I've designed the concept mockup, anyway.) In cases where it makes sense, though, you'll notice bar colors are reversed when high values are bad (e.g. heat).

Info windows can be displayed for items, Cogmind, and other robots. 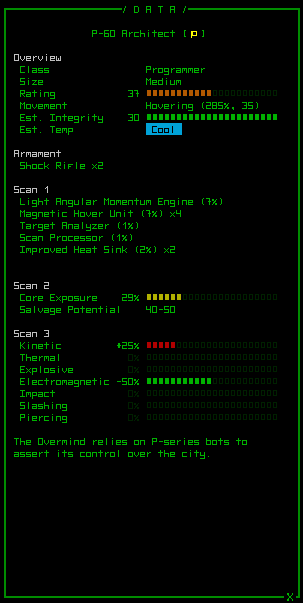 With an advanced scan processor you can discover important details about your enemies, like this programmer-class bot.

Multi-tile robots are indicated as such with their icon, so even in ASCII mode you'll know it's a single large robot and not a group of many smaller robots (though letters will never be reused like that). 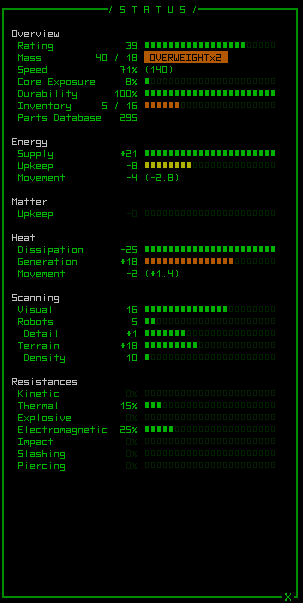 Cogmind's own detailed status window is still a bit too utilitarian, but it's good enough for now.\

All windows are, of course, animated:

The gif doesn't quite capture all the frames very well. There are also sound effects.

Next: Integrating the manual with the game through context help.

just out of interest would it have a momentum build up like in df so you arnt always moving at full speed and turning 180 while maintaining speed?

To keep things simple your movement speed does not taken into account momentum, it just determines how many spaces you can move before others will act. Your effective momentum *is* recorded, however, because it is used to determine your ramming and melee damage bonuses. (Turning will drop your momentum, as will hitting something, or stopping of course.) Allowing it to affect movement in general would be too confusing for the player. Some roguelikes have done it well from a single-player perspective, but that's because it is a core mechanic for them. (Knight, a 2014 7DRL, and an in-development air combat game called Kerosene Thunder.)

could i get a link to KT? and also im hoping for a playable release for this game soon! im drooling of all the mechanics its so indepth it sucks that AAA games of today dont have these mechanics and yet you can put them in to one game! but i understand though since the engines that are used kinda have alot going for them besides the one for this since its just ASCI

Indie roguelikes tend to be deeper than most AAA games, but the two cater to different audiences, really. Glad you're into this kind of game :)

Cogmind will also have a tileset, by the way, though that tileset will maintain a style similar to ASCII so the overall aesthetic is the same. Or you can always switch to full ASCII easily, since both will be supported.

Now I'm going to have to show my ignorance and ask the question: What is "KT"??? I've never heard this term before. Playable releases might be available (hopefully) within two months.