Infested Planet has been slowly getting more and more graphical polish. Some of the things added recently were decals, explosions, lighting and textures.

I haven't posted an update in a while. Part of the reason is that after the SC2 release, my schedule has been turned upside-down. Thankfully, I think that I've recovered this week.

The other reason is that I've been working on various graphical improvements to the game. Let's go over them so that I can brag.

Before, explosions used to be just puffs of coloured smoke, like this:

I spent a couple of days last week tweaking how they look. Now I have a nice fireball, sparks and shockwave effect. 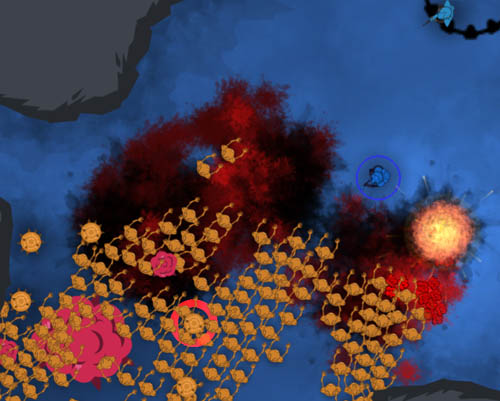 I wanted the game world to have more variation in brightness, instead of being the same tone all over. I already had a simple shadow system hacked in, but I also wanted lights. Thankfully, I played around with something like this in a previous (unreleased) project. 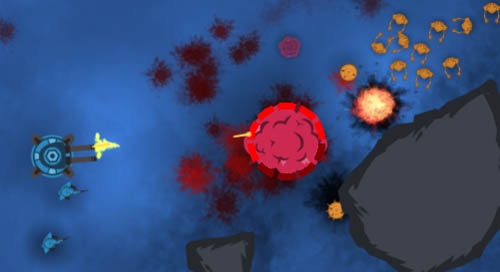 I also added the small detail of muzzle flashes for the marines and turrets. They help make the firefights more alive. Notice how the areas around the cannon and the explosion are subtly lit.

One thing that's always bugged me about the new art style is how flat the background was. I was also worried about the colours - grey just seemed bland to me. We're still working to improve the colour - that's why I'm experimenting with blue - but I think that I've solved the background problem.
I did two things to make the map more interesting. I added textures to the ground and I also added extra texture around the walls. Check out this zoomed-out view. 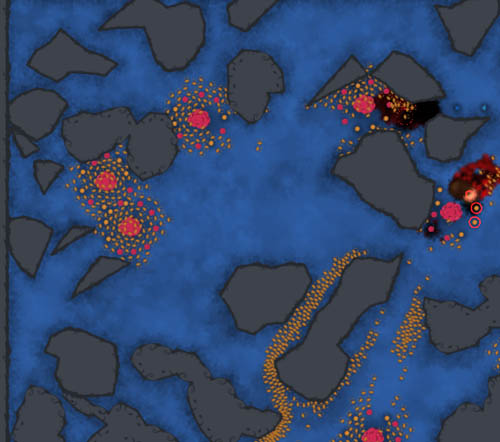 As I've mentioned, there are still a couple things to figure out. I still think that the colours of the game need an overhaul. Carlos and I are working on that right now. I'm shooting for a darker, more grungy look for the enemies. The second thing that I want to do is to make the walls more interesting. I'll probably use the same technique that I did for the background.

Once I have those two things out of the way, I'll probably release a trailer for the game. That won't mean the end of graphical improvements, but at least the large parts of it will be complete.

You know maybe you should (after everything else is done obviously) work on a more cartoonish version And have a switchable option somewhere. That way if someone gets bored of one look they can switch for awhile may lengthen the amount of time spent playing if they don't get bored of the looks.
Assuming you are trying to go for a creepy darker look like you said. :P

To be honest, making one set of graphics is driving me crazy already. I don't know if I can make a 2nd one and stay sane.

I love the update. The new graphics looks great!

So is there any sort of estimated release date for this yet? I'm just very excited, and cannot wait!

Thanks for your interest Fib. I don't want to give a precise date just yet, since there's so much work left. To be honest, I'm not 100% sure myself when it'll be done.

I expect to release it sometime this year though, probably in the late fall.