We continue our look at the revamped marine structures in NS2 with the new design for the Infantry Portal. 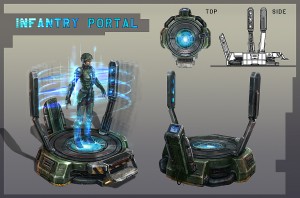 The gameplay function will remain the same as in NS1, which is to allow marine players to respawn after they've been killed. The IP will also have one additional feature which is that marines can instantly rejoin their squad by using the computer screen on the back, once the IP has been upgraded.

The technology behind the Infantry Portal concept is based on current scientific experiments with teleportation, or, more accurately, the successful transfer and encoding of information from one atom to another. Essentially, when the photons have been triggered in just the right way their parent atoms enter a quantum state in which atom B takes on the properties of atom A, after which process atom A disappears.

So, in the case of the infantry portal, all of the physical information of marine A is imprinted onto empty-marine-blob-of-atoms B, which has been created from the similar 3d printing technology used in the armory. Then the consciousness of marine A is downloaded into marine B, all in the space of several seconds.

Thanks for reading, and please join us next week when we discuss advanced quantum electrodynamics and how that relates to the new TSA marine electric toothbrush that has been added to the game.

In the meantime here are some renders of the IP model and a short video showing the deploy and active animations. 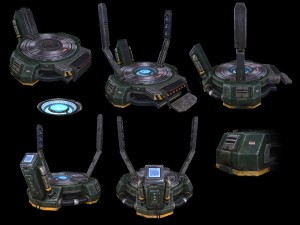 Nice concept for respawning...waiting to see more cool stuff from you guys!!!

Nice! Does it tailor new clothes, too? ;)

Stupid question i know, but will there be Tele-fragging?

Seeing as there's an unpacking animation already, could that be reversed to provide a commander-only method of disabling structures in order to provide longer product life? In other words, collapsing the structure provides additional health, since the delicate inner workings aren't exposed.

Great quality, both visually and conceptually.