It's the last day to vote for Indie Game of the Year. Check out some of our latest updates.

This is blog 4 and 5 in a series of 5 updates. You can find all of the other updates here: Renegade-x.com

Renegade came out in 2002, and it was Westwood's first and last C&C FPS game. For infantry movement, they got a very basic system ingame: a player can run, walk, and crouch. It was an arcadey style that did not require anything over the top, because Renegade is not meant to be a realistic or difficult game to play. Not many FPS games at the time went far beyond this. Halo for example, which was out by the time of Renegade's demo, had similar controls.

Here we are in 2012. Big FPS titles have introduced new gameplay features into the mix: iron sights, prone, sprinting, weapon heat-ups, recoil, grenades, melee, and more. So how do we respond to this, as a modern remake of a classic? We want to modernize our game, but not without ruining the balance. Infantry can't be too hard to play, nor can they be too effective.

In the Unreal Tournament 3 beta version of Renegade X, we kept true to the original Renegade as much as possible. But if a remake is going to be a clone, then someone can play the original and get the same experience. The 'X' in Renegade X implies that we are going above and beyond in all ways we can. Visually, for example, our levels are more detailed with static meshes and lighting. In terms of audio, the engine is built in a way where sounds are varied and not repetitive (example: 12 pistol shots won't all sound identical, they will vary slightly in pitch etc). We're not using the original Renegade art or sounds for the most part, we believe we're making something better.

The same applies to gameplay. With the direction modern FPS games are going, we believe that Renegade X needed to adapt while retaining its fast paced fluid style. Changes in infantry gameplay also allows us to be more creative with map designs. The key is to add things that add to the gameplay and not take away from it. Anything added must have counterbalancing pros and cons.

A major inspiration for the new infantry combat changes comes straight from Renegade. Check out the original CG trailer: Youtube.com

The commando is seen with nightvision, avoiding lights, vaulting over barriers, rolling and dodging, throwing grenades, sprinting, etc. These are all things that didn't make it into the game, but it was clearly something the developers wanted or considered. In the always.dat folder, you'll find that Westwood kept the rolls available for modders, and they were re-implemented by the Sole Survivor mod for C&C Renegade. We wanted our game to play a lot like what was seen in the video, except perhaps for the dual wielding and a couple other things.

Below are some features we've implemented:

1. Sprinting: Players can now sprint by holding shift. This allows them to cover longer distances in shorter times. Sprinting is based on the stress metre, and therefore you cannot sprint forever. It works well when trying to put C4s on enemy targets or retreating from the battlefield. The disadvantage is that you cannot use your weapon while sprinting. When your stress metre is empty, you can no longer do some other moves.

2. Dodging: A dodge can be done by double tapping in any direction. It takes a portion of your sprint metre, and it allows players to dodge incoming fire and do a roll. We found that dodging feels very badass - there's nothing like nuking a building and leaping out the window at the last second.

3. Recoil: A level of recoil was added to the game, and this feels like you're actually wielding a weapon rather than just holding down the fire button. It immerses players into the game more, and allows them to learn how to use each weapon, rather than limiting all weapons to just point and click. Weapon Spread is not massive, and recoil is not as big as it is in some realistic games. It's still Renegade, it's still arcadey, just a little more interesting.

4. Nightvision: In the original Renegade, there was only a green overlay on top of scopes, which many people got rid of with texture replacements. In the UT3 version of RenX, there was only a clear scope. In the standalone Renegade X, nightvision is toggleable. It works as it should; you see players and projectiles in a night map, making scopes more useful.

5. Special Items: Instead of having only superweapons available for purchase, we're going to be putting a items menu, where players can customize their kit, purchase sidearms and sidearm replacements, airstrikes, and more.

6. Spotted System: The radio commands will still be available, but another system will be added in Renegade X. Instead of hitting ctrl, alt, ctrl-alt and a number, you'll be able to hit Q at a friendly player or structure or an enemy player or structure, and it'll initiate a general radio command. For example, hitting Q while targetting an enemy will give an audio, text, and radar indication to your allies that there is an enemy that has been spotted. This increases the teamplay in a game, but it'll be designed in a way where it's not too hard to mount a covert attack.

All that I have mentioned and more is being tested, and is subject to change if we feel that gameplay is harmed. While there are things that give infantry an extra boost (sprinting, dodging, items), there are things that players need to be mindful of (depleting stress metre, recoil, not using weapon while sprinting or dodging). We believe that the above has been executed in a way where the gameplay continuum is unharmed. Overall, we are very excited to show all of this off. It adds character to the game, and makes you feel like a 'Renegade' commando like never before. It makes the game unique from both modern FPS and other C&C FPS games.

This is another map being developed by Robin Nielsen. Mesa is a remake of a stock C&C Renegade map, and it was one of the team's personal favourites. We didn't have a Mesa remake in the Unreal Tournament 3 version of the mod, so we needed to make one from scratch. Renegade X has always been interested in making levels with very different styles, themes, and environments. We had cold snowy maps and we had warm temperate maps, we had maps at different times of day, we had maps in the mountains and maps in the deserts, maps on the islands and maps in the caves. Having a large variety of environments makes the game refreshing to look at and explore.

For the standalone multiplayer, we wanted to develop a level with a very ominous feel. Dark maps look great in the UDK, especially with our nightvision scopes - many players enjoyed the visuals of Black Dawn. Overall, the original Renegade took a more jubilant art style. But we wanted an environment that reminded us of Tiberian Dawn and Tiberian Sun, which were more gritty and gloomy. Mesa is a dark, mature map that takes full advantage of the UDK's lighting systems. 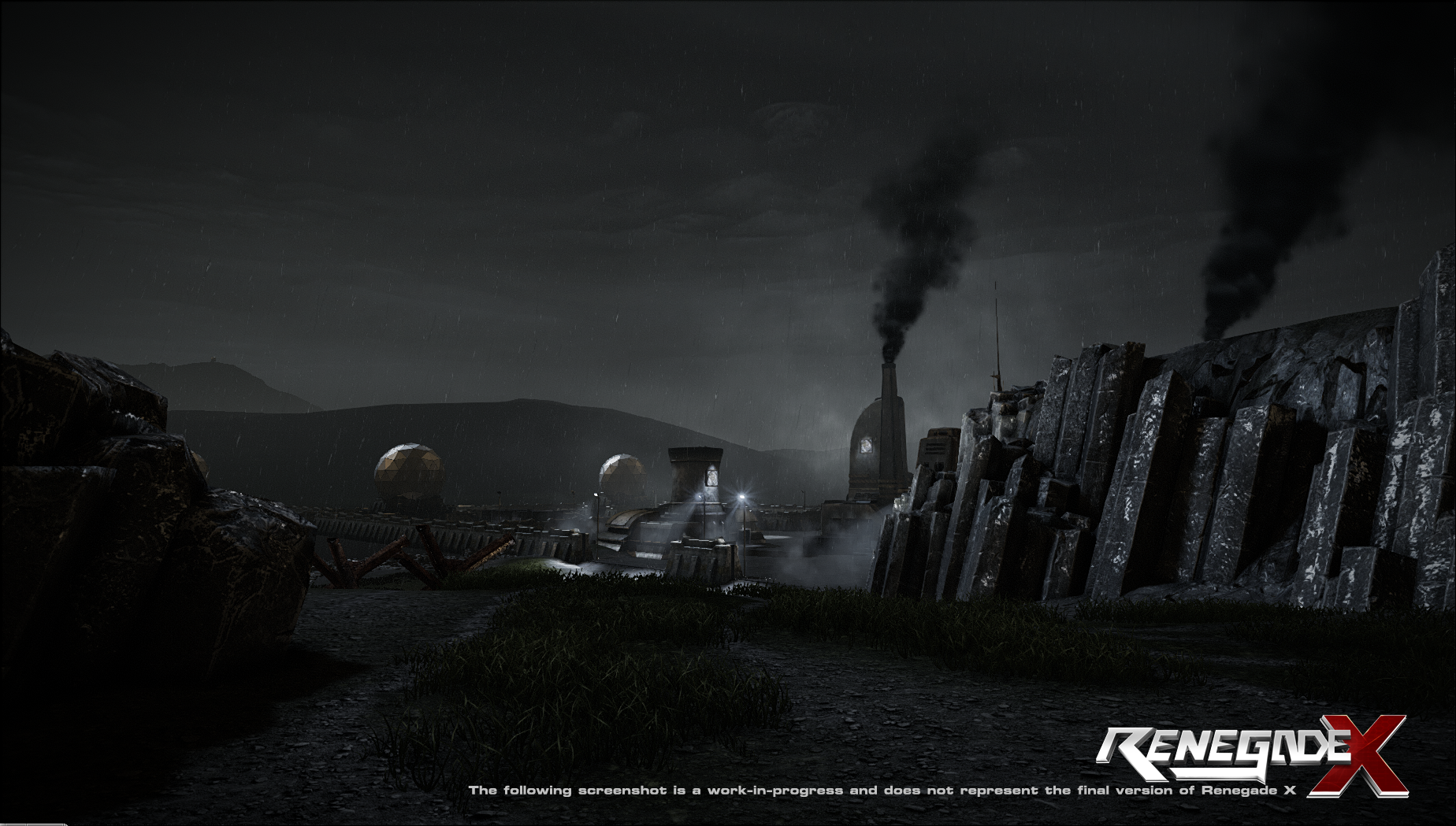 Like other levels, we wanted to make a map that tells a story. Mesa is based in Iceland near an old radar grid established before the Tiberian wars. The radar domes were a part of a larger early-warning system. After the initial spread of the Tiberium contagion, GDI reconfigured the facility to scan for Tiberium activity in the area. The sensors peaked and were detecting strange patterns in Tiberium growth in the area. A GDI task force established a forward operating base to investigate this irregularity. Geological upheavals have uncovered a mutated form of Tiberium underneath the surface, which was discovered near the radar base. 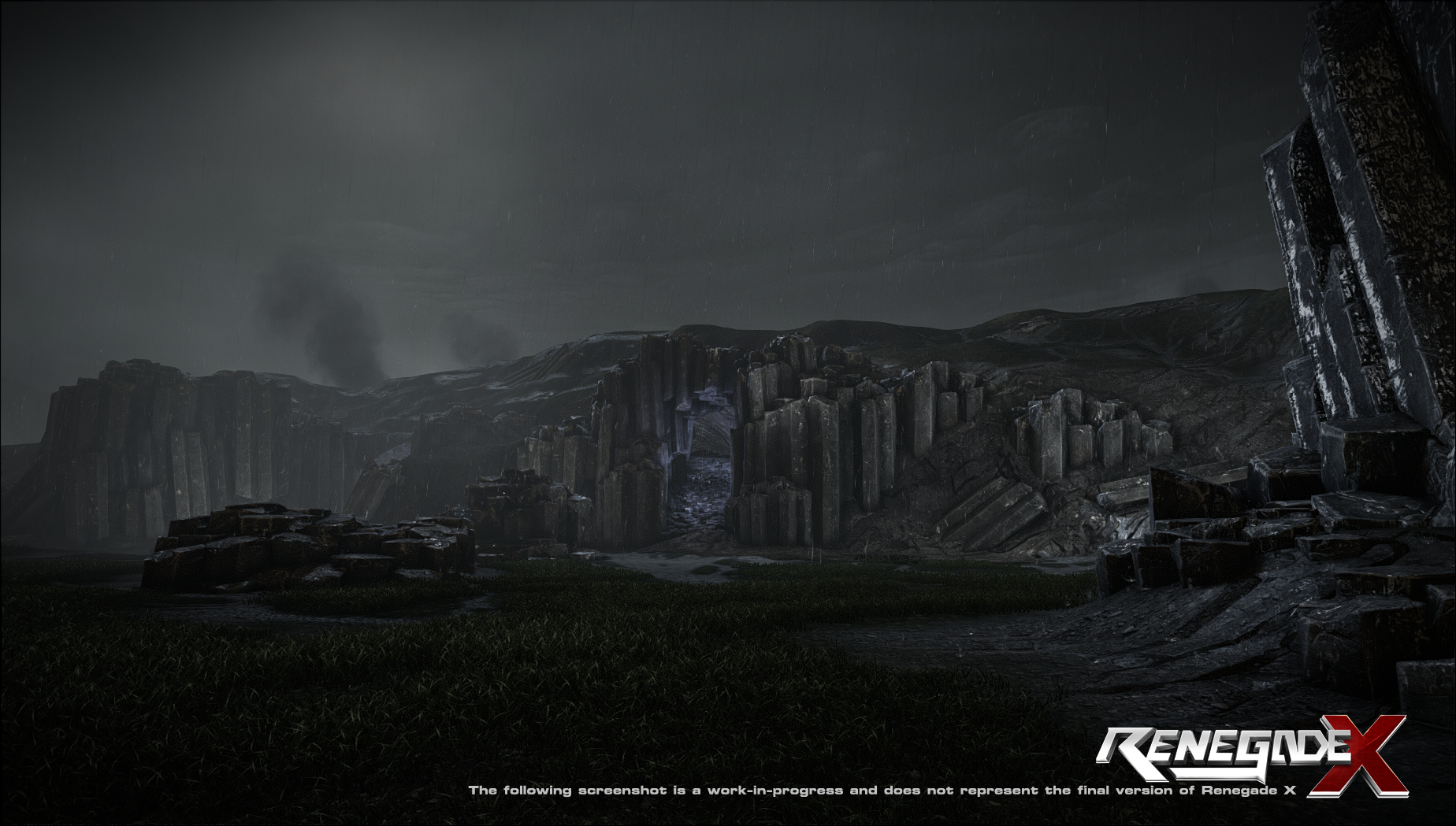 This rare "blue" Tiberium is more dangerous than the ordinary green crystals, but it may contain minerals that make it more valuable. A Nod operative leaked the information to local Nod cells in the area. Those groups then established a base to take on GDI forces and study the anomaly. After the establishment of both bases, strange weatherstorm activities were experienced in the area. External communications have been cut off due to the storm, and both GDI and Nod are racing to find out what the cause of the disturbance is. 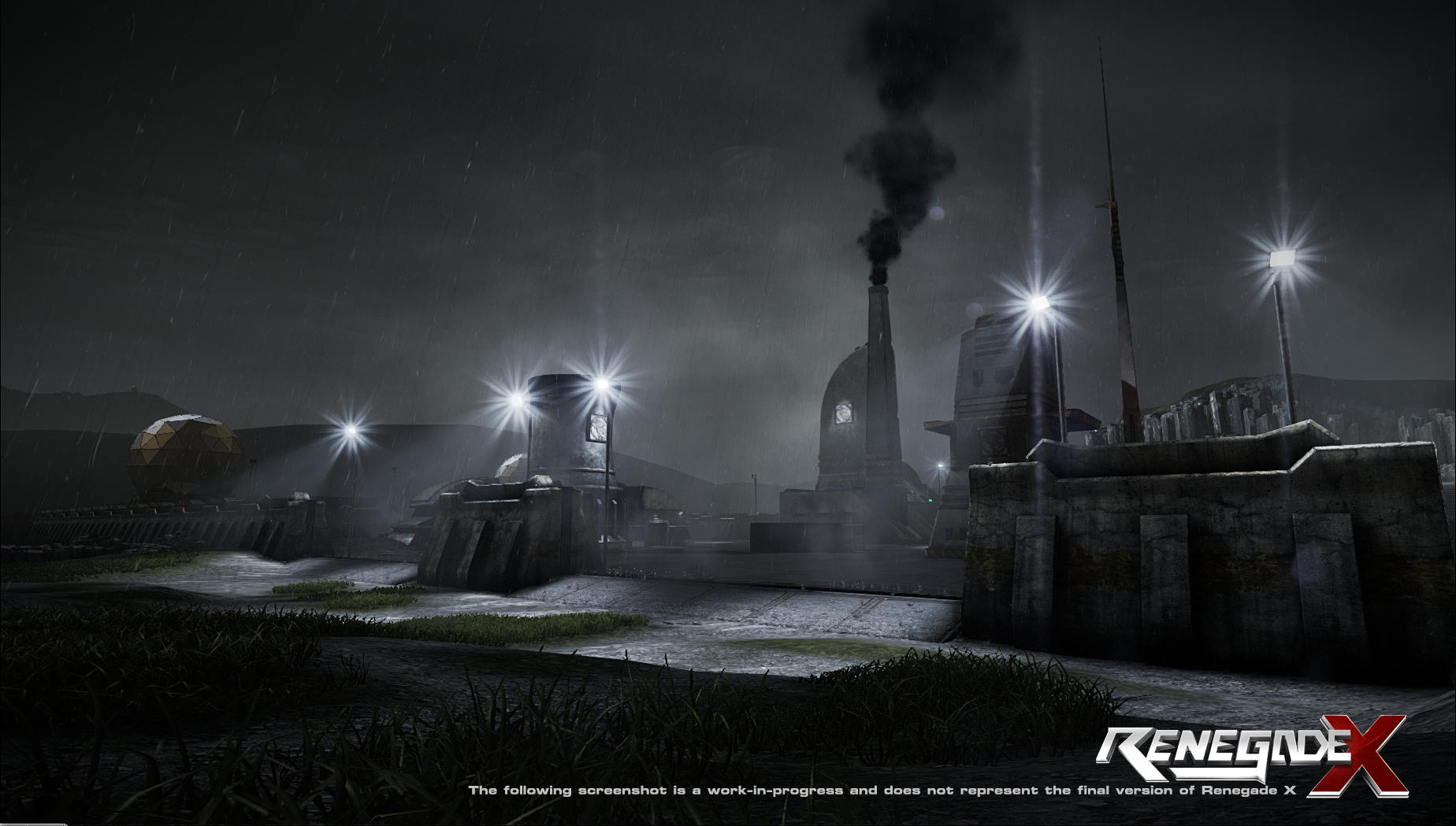 We have changed one aspect of this level, and that is the harvester route. In the original, automated harvesters would stuff themselves into the tight cave, driving into friendly vehicles and pushing them into enemy fire. The harvesters were difficult to attack on foot (particularly for Nod, who would be shot by the AGT). Because of these factors, we have placed green Tiberium on the vehicle field instead. GDI and Nod troops will still be able to go and attack the enemy harvester by going to the new harvester spots. Otherwise, Mesa will play as it did in the original.... X!

amazing thought those screens were renders

In the olden days of 2005 such screens would have only been renders for C&C Renegade mods.

Spotting seems interesting and useful
Does the cave still exist in mesa?

Yup! We didn't show it yet because we've still got to beautify it.

great update. im not sure about recoil, thats one thing i loved about renegade, but im open to the idea and cant wait to try it out :)

You guys are doing great I have to say. Though I must really say that I really hope you dont fall in the MMFPS-pit (Modern Military First Person Shooter) as you sort of did with your Black Dawn demo-map (Out of boundries deaths, scripted events, failure states and all that nonsense). Keep the stamina-count rather high; Cant a well trained GDI soldier sprint for more than 5-10 seconds, Call of Duty-style?

As for the graphical looks of things you are defenitely heading in the right direction. Though I would like to point out the fact that a LOT has happened in the PC-market since you began in 2007. Many textures (As an example) looked downright hideous (Low-resuted) in Black Dawn, and thats when I ran it at absolutely maxed out graphics. You can defenitely step up the level of detail quite a bit on that part, unless you already did that for the multiplayer.

All in all, good progress, keep up the good work everyone at the Dev-Team. I cannot wait personally to try your next release out!

P.S In Mesa, as you said it was an early-warning radar installtion, any chance of a RA1-era easteregg, or even Radar Dome? :D

This looks really good idk if we can/should compare the graphics to Black Dawn.

When will the standalone version come out? will there be bot battles?

Comes out 2013 sometime, and in Skirmish by the sounds of it.

I hope the graphics are not going to be better then Black Dawn...

It was so amazing that I could really believe it!

(And my computer couldn't keep up with you guys!)

keep doing things has well has that!

Really, the UE3 is from 2007. Everyone should be able to run it this many years later. Better graphics doesnt mean there can be lower settings.

Yeah, when I got UT3 it didn't recognize my videocard so it set my resolution to 8x6, not 800x600, 8x6. Unreal engine is capable of running on some pretty low end computers.

Glad to hear infantry combat won't be as bunnyhop friendly. I was going to suggest taking a look at PlanetSide 2 for a decent system, but no need, sounds like it's gonna work out just fine without making vehicles OP as a result of the planned changes.