Post news RSS Implementation of OCPs on the HUD

After a week, INFASA's new HUD gauges have been completed and an example showing how they work has been posted. Read below for more info.

1. An experimental addition to the FreeSpace Open engine

The hud_gauges.tbl, a file which allows to manage custom and retail HUD gauges in FreeSpace 2 SCP, is a powerful but still experimental addition to the FSO engine. I needed one full week to get a special table file for INFASA working, but this experience has helped a lot. The team working on the code, in fact, will soon be informed about the minor bugs I found in hud gauges - some of them can be noticed in the screenshots, but they're expected to be solved in future releases of FreeSpace Open (namely, FSO 3.6.11).

As you probably know, one of INFASA's features involves the use of multi-purpose OCPs (Onboard Computer Programs). Due to the importance of the programs, it's been decided to modify the standard FreeSpace HUD in a way that would make their use effective and simple. There are many ways to show vital data on the HUD, like image subtitles and training messages, but HUD gauges are without any doubt the most realistic way to make consistent changes to the original FreeSpace settings. HUD gauges are various and can do basically everything, so these news will show an example of their various use.

2. The process of getting them in-game

Getting a fully functional hud_gauges.tbl for INFASA was not an easy task due to the relatively poor documentation on the feature (which is fully justified giving its WIP status in terms of code developments), which resulted in odd effects and multiple crashes. Only two days after the very first attempts, however, the plans for INFASA's custom gauges were well defined. In the following days, the original ideas have been significantly improved with continuous additions, controls and tests. Before the latest upgrade of the system, the total number of gauges which were created for in-game usage was 33, but the current number has been reduced to 29 following the decision to make use of training messages (which appear inside a blue box on the HUD) instead of additional gauges. The gauges located at the top (where "oc programs" is written) have also been reduced in number to get rid of unnecessary features and make them fit with the rest of the HUD.

Thanks to the remarkable help of ShadowGorrath (ModDB nickname: Goran), who modified existing parts of the HUD to generate the OCP-specific gauges you can see in the screenshots, I've been able to add realistic HUD effects and write texts on them. As soon as the table has been finalized, representing the effect in-game is very easy thanks to a multitude of SEXPs which draw texts on given HUD gauges and change their color. As you can see below, it's even possible to show the distance between vital targets and their destinations, the player and his targets. It's also possible to show time countdowns, which are very likely to be used in the main INFASA campaign.

The best way to show the use of this new addition is to provide an example. In the following screenshots, you'll see a mission which was specificately created for the purpose of showing the latest additions to the modpack. As a test mission, it's not part of the main campaign nor is supposed to be released with the rest of the modpack - it's just a demonstration. Although the current gauges are pretty much definitive, additional improvements are not to be excluded. The central gauge, which shows the name "Red-Eye" in the screenshots and lacks a proper image, may be significantly improved in the future.

In this hypotethical scenario, the player is tasked to protect a couple of Fenris-class cruisers as they patrol a given area in proximity of Mars. It's worth noting that the Pathfinder program, used to handle waypoint paths and relative distances, shows the distance between the first cruiser and its jump point. A total of five programs can be displayed on the HUD with the current gauge settings (please note that the last space is empty because the test mission shows the four main OCPs), but the number may raise if needed. In any case, INFA2 (Inferno mod which will take place several decades after INFASA) will use a higher number of OCPs to represent the technological development over the years. 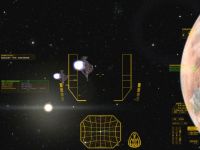 Suddenly, the player is warned that the Red-Eye (the OCP which handles crypted and/or tactical long range messages) is receiving a message. 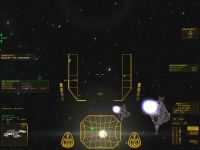 The message comes from Command, and reports that the cruisers the player is currently protecting belong to the Saviours of Mars, a group of rebels and fanatics who want radical changes to the political structure of the Republic (not to mention the expressed will of threatening all colonies which may be a problem for Mars). 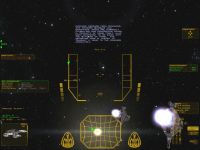 The Voodoo, the program which handles short range transmissions of data, is receiving a virus. The player's orders are to transmit the virus to the cruisers and prevent them from escaping from the field. As soon as the virus is transmitted, the Shield of Ares (Mars' orbital defense system) will fire a multitude of Ballista missiles from Phobos (Mars' largest moon) to eliminate the rebels.
The Pathfinder reports the distance between the cruisers and their jump point at regular intervals, so the player is well advised to transmit the virus ASAP to compromise the cruisers' navigation systems and allow the Shield of Ares to destroy the designated targets. 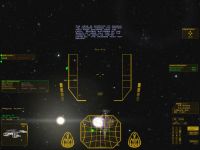 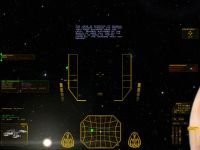 The Voodoo reports that the virus has been successfully transmitted, and the Red-Eye sends an instant message coming from Command. The Shield of Ares is firing its Ballista torpedoes to eliminate the cruisers, so the player and the rest of his wing are ordered to keep safe distance. 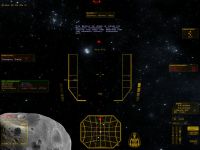 The torpedoes, which arrive in proximity of their targets via subspace (conventional movements require too much time in space), are spotted by the player's radar. The cruisers are trapped because they can't engage their subspace drives and obviously aren't fast enough to escape from the incoming torpedoes. 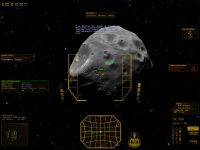 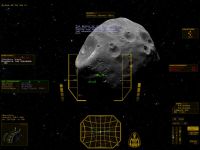 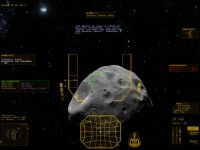 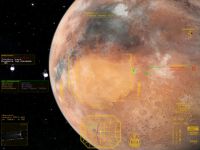 The Ballista hit the cruisers and take them down in 1-2 hits. The shockwaves are immense and incredibly dangerous for virtually any asset. 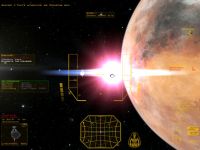 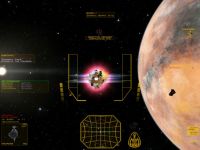 The area is clear and the player is allowed to return to base for immediate debriefing. 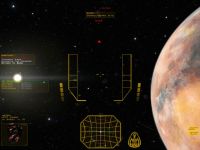 4. Future use of the gauges

As creator of the original OCP concept, I have great hopes on the use of OCPs. The test showed above, as previously said, is only a mere example: you will see even more original stuff in INFASA, and the presence of additional demonstrations in the news is not excluded. The future use in INFA2 has been mentioned above, but I'd like to add the HUD gauges will almost certainly used to represent Nanotechnologies and other INF features which will be made public very soon.