Today we're going to be looking at the extensive weapon modification system, some cool new tweaks, and a closer look at what the hell is taking so long.

Hey everyone! First off, if you're reading this, I'd like to thank you for following the project. For today's long past due progress post, I'm going to be talking about a few very important things concerning the game. The first being a good look at what the weapons modification system in all of its glory, and the second being a look at what the hell is taking so long. I'm also going to talk a little bit about some miscellaneous features I'm adding to the game for extra polish. So, without further ado, let's get to it!

Weapon mods are exactly what you'd think they'd be. Modifications you can buy from the trader

and equip to your weapon to make crazy stuff happen. I've been teasing it for awhile, and I event had an alpha version of it previewed a long time ago. However, I've completely revamped the system. Now it's not just awesome, it's awesome. Before weapon mods just added simple effects. Now they are real game changers. You can equip 3 per weapon, and mods can synergize and inherit the effects of each other.

So I've been throwing around some fancy words like Inheritance and Synergy without actually explaining how they work. So I'm going to do just that: explain how they work. Inheritance is a cool thing defined per mod. It defines what type of mods are inherited by the effect of this mod. For instance, the "fire" mod can inherit any mods of type "debuff". You can see an example here, with fire inheriting the ice mod to create: FREEZING FIRE.

On the other hand, we have synergy. Synergy is a cool way for mods who don't inherit each other to interact. Synergy happens alongside inheritance. For example, acid gas and explosions working together:

I don't want to spoil all the synergies and inheritances, they're way too cool when you discover them yourself.

Game Mods which add Weapon Modifications (2 different types of mods haha) can define their own synergies and inheritances.

I also don't want to spoil all the mods in the game, so here's a gif of chain lightning, poison gas, and explosions all at once.

Buying more than one of some mods will result in effect multipliers, such as the explosion mod. For example, here's 3x equipped explosions.

I can confirm that there are generic mods such as "add damage" and "add hp", but there also cool things like you've seen so far above. There are a total of 21 Weapon Mods.

Here's some cool features I've recently been working on and a short explanation behind them.

Enemies now leave behind blood behind when they die.

I've also added a round announcer. The announcer comments on certain stuff between rounds. Yes, you can turn it off. You can also add your own custom announcers through modding. The default announcer is a..pretty well known guy. I'll be revealing who it is soon. I can't believe I've been working with him and it's been a great opportunity.

What The Hell Is Taking So Long?

Double Death became a lot bigger of a project than I thought it'd be. I'm proud of it, but many obstacles have become apparent. I've been keeping a physical checklist (2 to be specific, one for overall progress and one for alpha/beta progress): 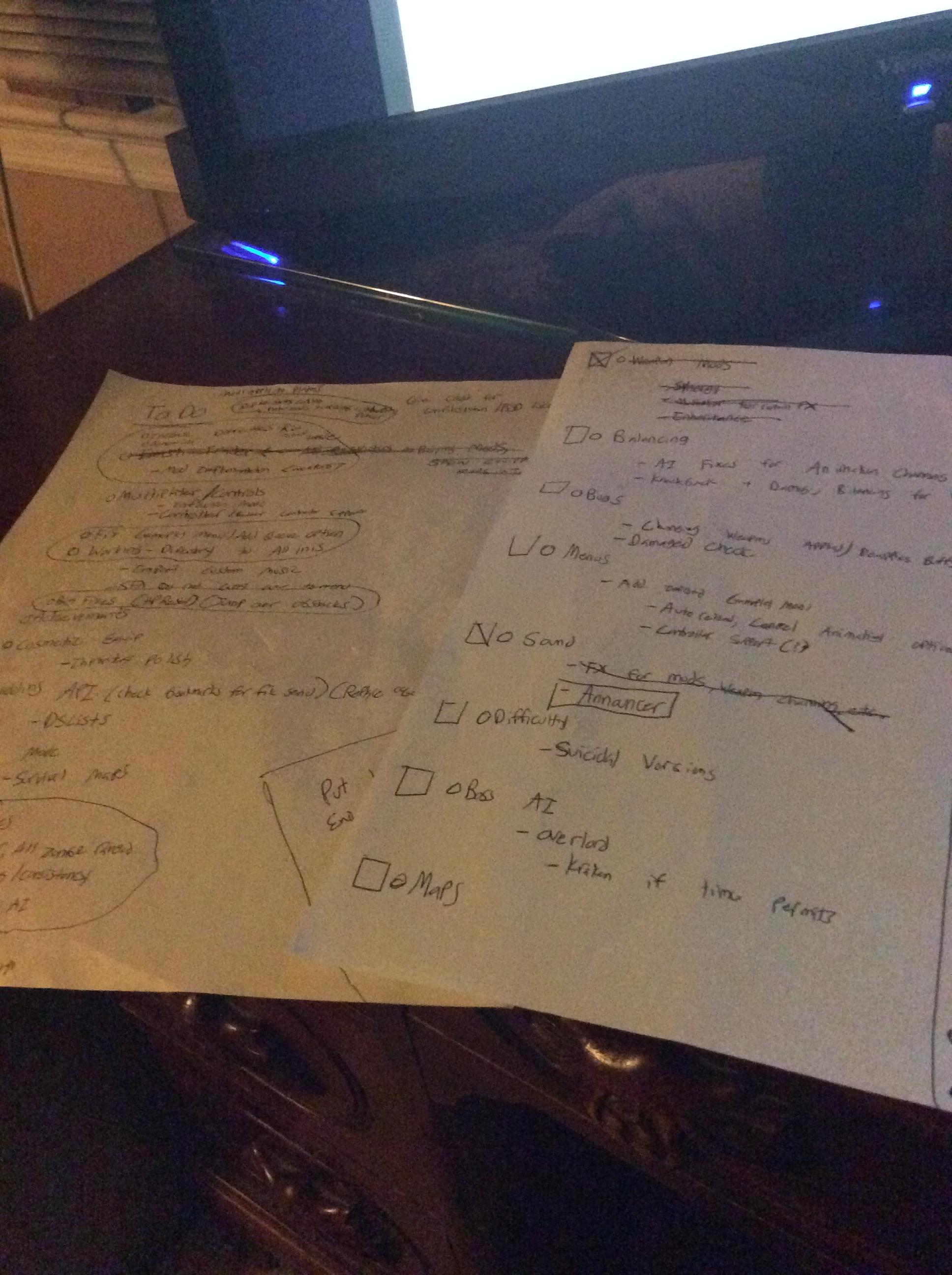 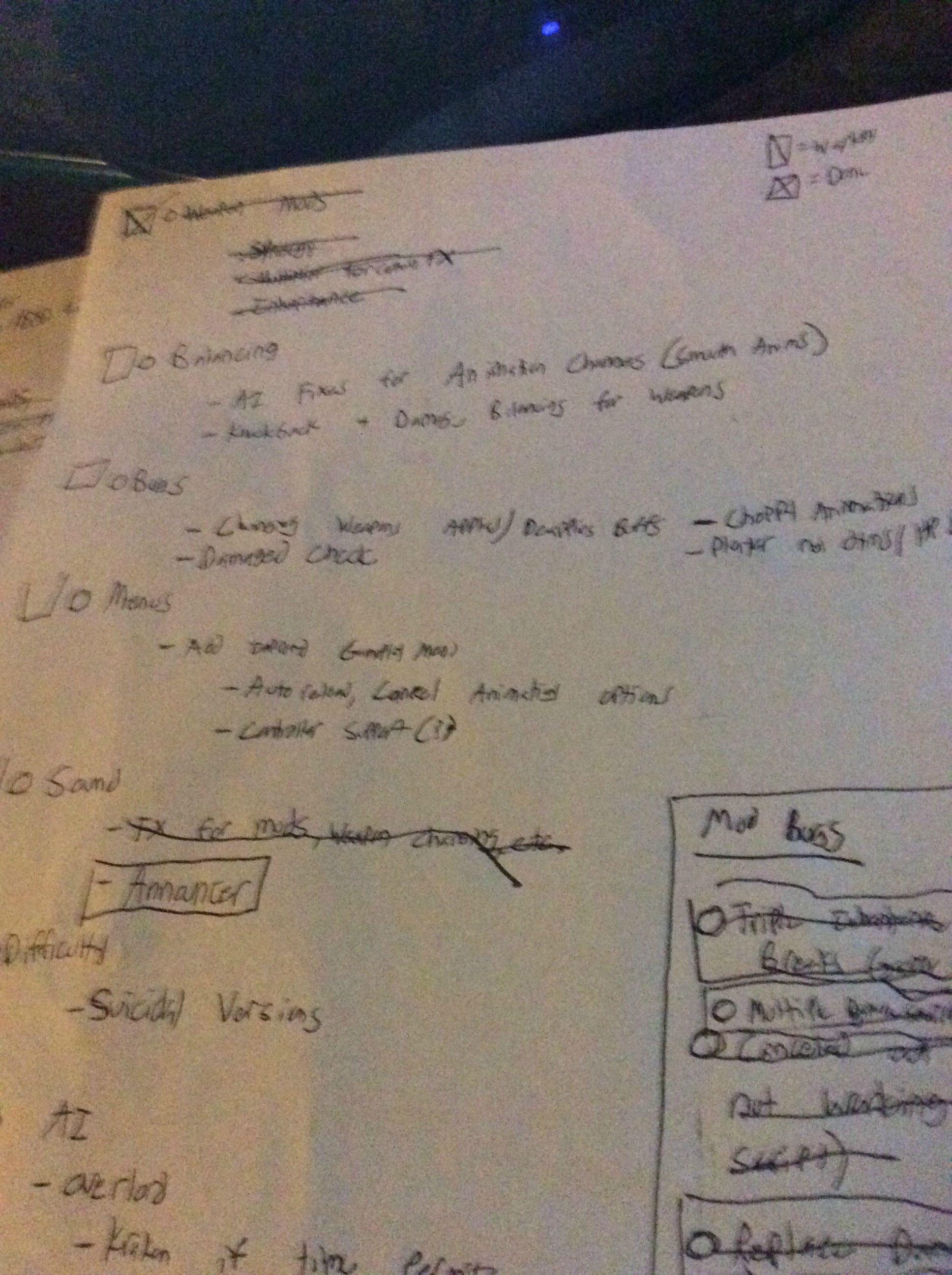 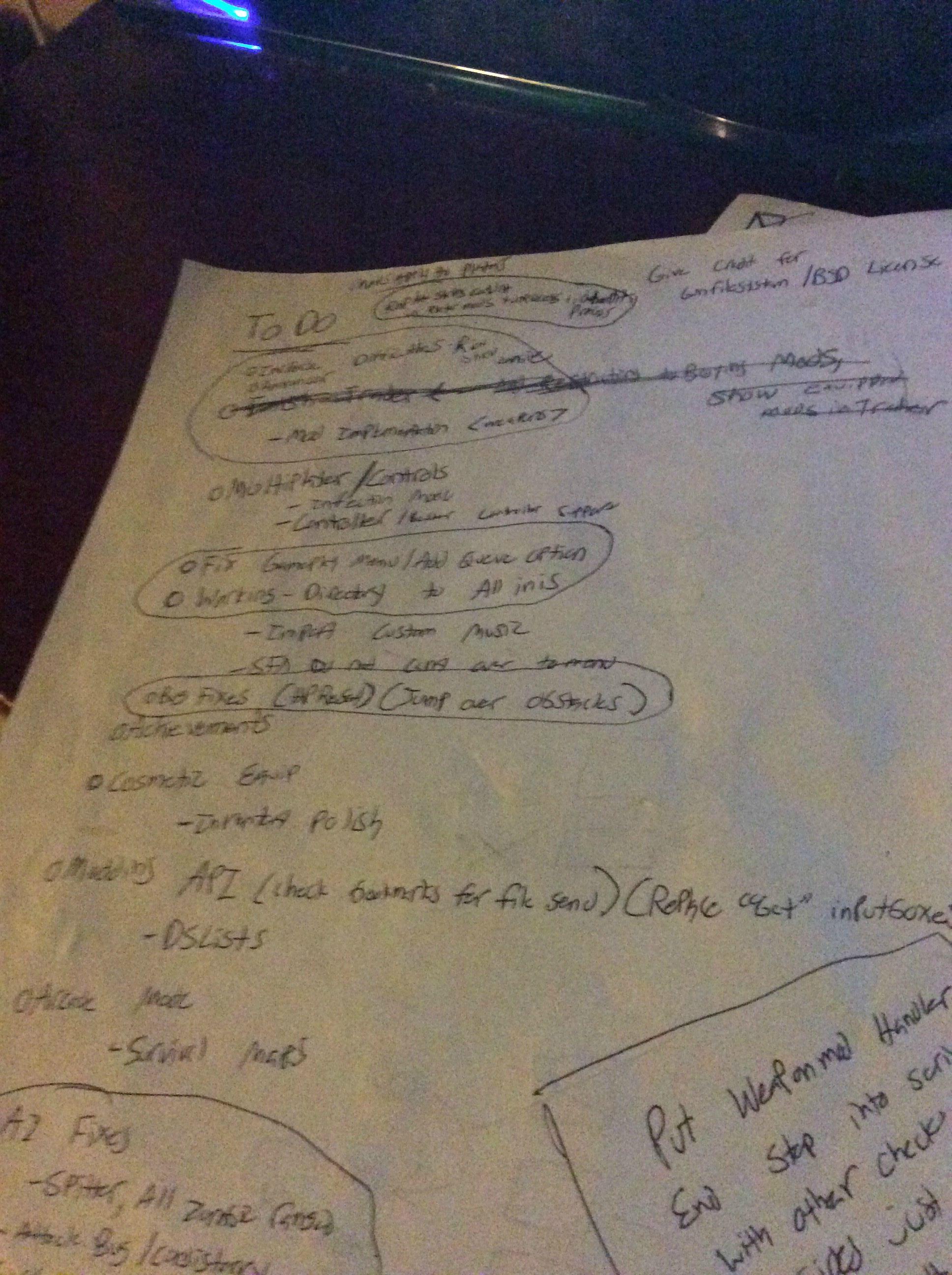 I'm still hoping to get the game finished by the end of summer, so keep updated guys! I should have a trailer coming soon as well.

And that's all for now. Thanks for following guys. I'll see you next post!

Lastly, if you want to get into contact with me here's a few ways!