Updates as of 4/19/15. After a long silence (excluding the screenshots posted), I'll be talking about the current state of Double Death, including what is currently being worked on and what still needs to be done.

Hey everyone! First off, I'd like to thank all of you for following the project. Today I'm going to have an extremely in depth post about the current progress of Double Death. I've been silent for a little bit, and I'm very sorry about that! I've been doing a lot of stuff behind the scenes, and I wanted to make sure I had a ton of stuff to show before I made a new post. I'm going to break it down into categories, that way you can skip around to whatever you want to read without having to go through a giant wall of text.

The main thing I've been working on is weapons. Since you've last seen the game, I've updated it to include 9 different weapons, which is close to 200 new animations. Because of the many new guns that have been implemented, I've also gone ahead and added new features to suit some of these guns. I thought it'd be a cool idea to go ahead and detail each individual weapon, so I'll be doing that. I've had to resize a few images here, so I'm sorry if there's any quality loss.

The classic weapon I'm sure you've all seen before, as it was the first one implemented in the game. Nothing really new has been added to this weapon, except I've changed the amount of max ammo and I've also increased the amount of damage significantly. The weapon is cheap and powerful, but is not efficient compared to other guns. You can melee with this weapon.

This gun has a high fire rate and does good damage. It can hold quite a bit of ammo, and is
very efficient for holding out in extended periods of time. You can also melee with this weapon, making it one of the most efficient weapons in the game, and a personal favorite of some of the developers. Design wise, I wanted to make a weapon that was balanced all around. It may seem a bit expensive compared to other weapons, but it is well worth it.

The axe is a well priced melee weapon made with one thing in mind: efficiency. It comes at a cheap
price, and will do good amounts of damage. When compared to the combat knife, the axe has a much
more reliable damage range, albeit lower overall.

My personal favorite weapon in the game, the dual pistols are extremely well rounded weapons.
They have an amazing fire rate and decent reload time. They do the same amount of damage as
the pistol, but since the fire rate is doubled, you can imagine how fun it is to fire. It has twice the ammo
of the pistol as well. It runs out of ammo somewhat quicker than some other weapons, but is just as efficient as the AK47 for holding out in most cases. You can melee with this weapon.

Ah yes, the minigun. I've been playing around with this thing a lot in test matches, and I've developed
a love-hate relationship in the best way. The minigun is extremely situational, and is best for taking
down overly tanky enemies quickly. It has extremely high damage and a high fire rate, but runs out of ammo at a rate higher than pretty much any gun in the game. Granted, it also has one of the highest ammo pools in the game as well. It's an expensive weapon, but with mods, this thing has plow down entire fields.

The combat knife, alongside the axe, is a balanced melee only weapon made for tight occasions when
either guns are too much of a hassle or ammo is scarce. In comparison to the trusty old fire axe, the combat knife is slightly more expensive. It has a wider damage range, and a more linear hitbox. You start with this weapon by default in Arcade mode.

The pistol is a weapon with low damage and a high fire rate. It reloads quick and is efficient for fast paced fighting. It works very well in earlier rounds, but begins to fall off as the game progresses. You will find that this weapon is much better in easier difficulties. You can also melee with it. It is the starting weapon by default in the Classic and Endless modes.

The Riot Shield is an interesting weapon. It's a great support weapon, but is very situational for the most part. It blocks directional damage, which includes pretty much all sources of damage except for certain things like explosions or earthquakes. Damage wise, it's somewhat low. This weapon is best used either for fun or in multiplayer, where it can be used to strategically.

God, I really love this thing. It has the highest single bullet damage output in the game by default, and is amazing for taking out almost anything, including bosses. The problem is that it takes forever to reload. It can carry a decent amount of ammo. The real reason to get this thing is for the scoping ability, which is a unique ability activated by the right mouse that allows you to shoot to almost anywhere on the map. It's great to play around with, and is fantastic if you are in a team with someone to protect you.

Those are all of the weapons that will be available for release. Each weapon will be able to equip up to (3) weapon modifications, which can be bought at the trader. Weapon mods can do simple stuff like increase damage, increase how much ammo can be carried,and increase fire rate. However, they can also have crazy effects like chain lightning, fire, explosions, and more! This is currently in progress, and I'll update with another development post when I'm ready to share more about this. 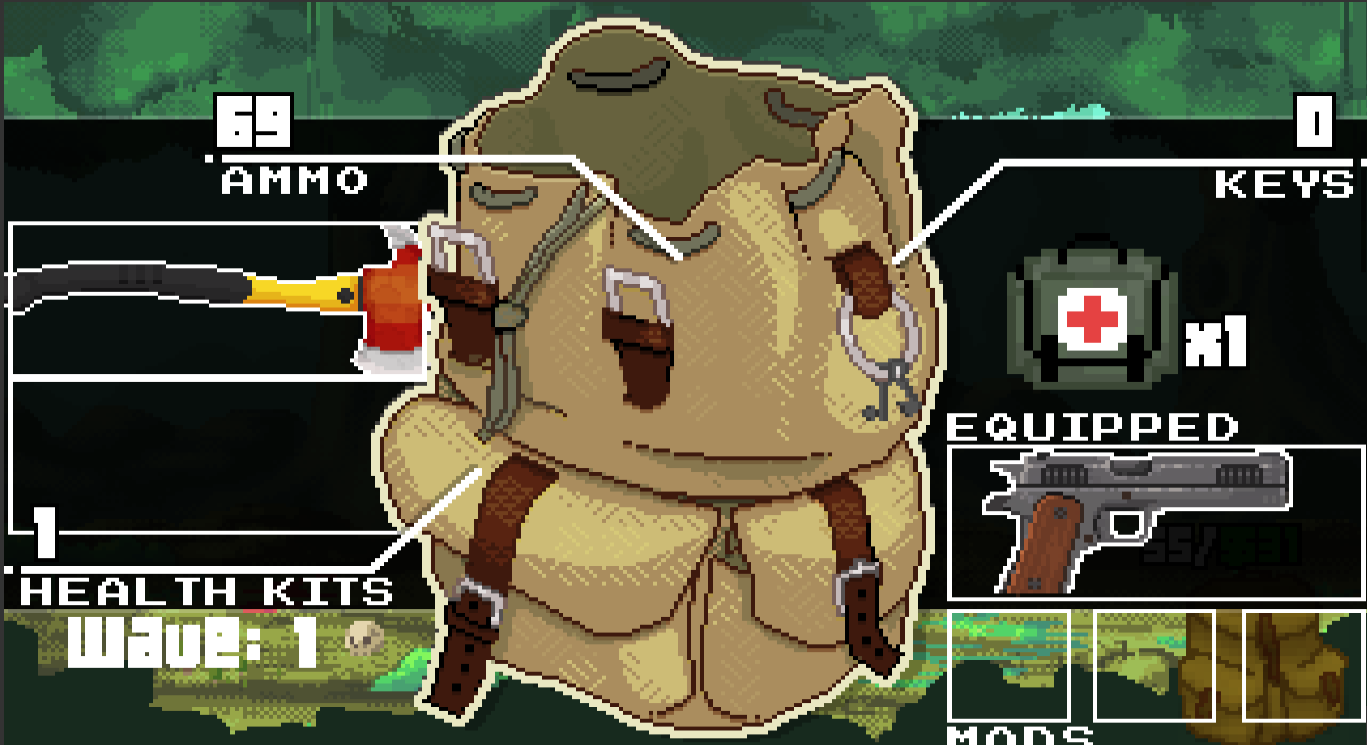 Since you've last seen the backpack menu, a bit has changed. The first thing you'll notice is that there's
two more weapon slots to the left. This allows you to hold up to 3 weapons (2 in the backpack and 1 in your hand) with a backpack equipped. To swap the carried weapon, you simply click the one you want to switch. You simply hold the assigned inventory key to access the BP (tab by default). You'll also notice the medkits to the right. You can left click a medkit to use it on yourself, which will heal you 3 times over about 3 seconds, or right click to throw a medkit on the ground for a team mate. Backpacks can still be thrown on the ground for team mates independently of medkits. 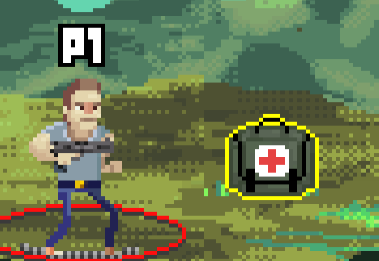 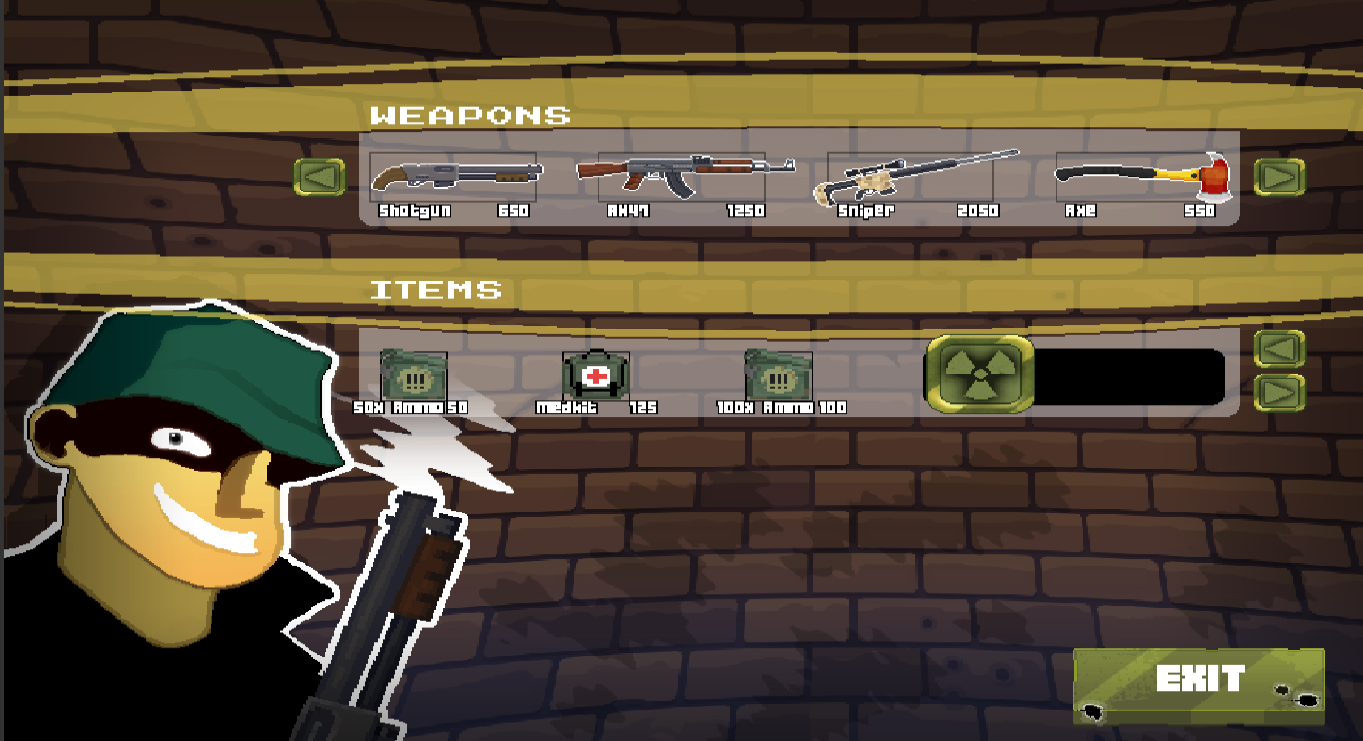 While the trader is not actually finished yet, this should give you a good idea of what's going on. At the top you will see the weapon selection. Below that is the item bar, where you can buy ammo and medkits. To the right of the ammo and medkits, that strange looking black box with the < and > buttons stacked next to it is a work in progress. When it is finished, it will allow you to buy mods for your weapons. I also have plans to add the trader countdown along with current cash at the bottom of the screen, and weapon slots below the item bar to show what weapons/mods you currently have. I also plan to let players sell currently equipped mods and weapons by clicking on the these slots. In the next development post, I will detail this more once the trader is finished.

The UI has been updated vastly since the last post, with a button overhaul and a new stylized pop up window (not shown). 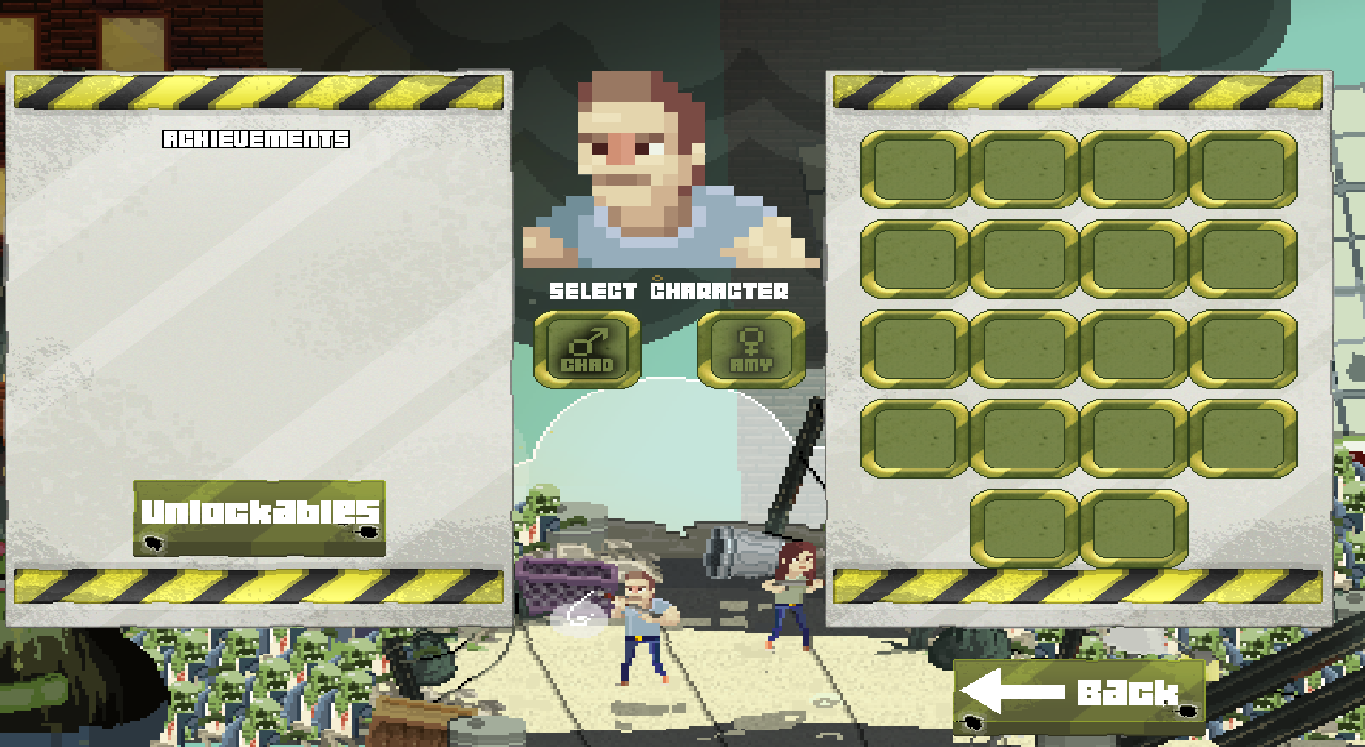 New Icons for Ammo Boxes and Medkits (partially shown in the trader pic). 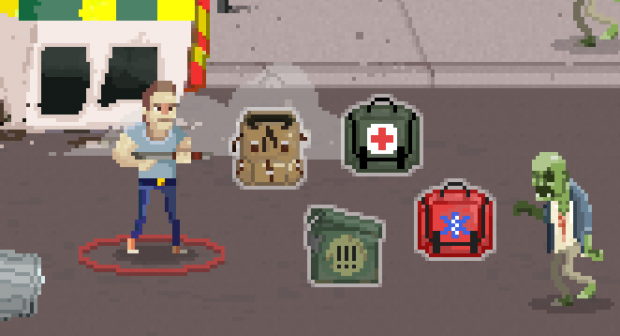 My favorite feature, I have added text based damage counters to enemies and players. If a player is healed, the text will be green.

Other Changes / Being Worked On

I am currently attempting to improve the AI vastly, and also improve it a bit for harder difficulties instead of the zombies just becoming huge bullet sponges with bigger damage ranges. More information on this soon.
Random Ammo/Medkit drops are being added. They spawn in set positions at random intervals.

What Still Needs to Be Done?

I've had a few people ask me what still needs to be done before the game is released. As you can see a lot of stuff is either done or being worked on, but besides the stuff above here's a list of features that need to be finalized.

Multiplayer (60% Done, need to update to keep up with newest features)
Modding / Mod Support (30% Done)
Steam Integration (Including Workshop!) (10% Done)
I'd like to redo all the maps in the game, as I don't feel like they are amazing right now (?% Done, it's subjective)
Finish Up Arcade Mode (30% Done)
Testing + Bugfixes/Final Polish

After the trader is finished the AI is cleaned up a bit, I plan to launch a trailer and a demo! This is very exciting as it should DEFINITELY BE BY THIS JUNE. I know I am terrible with dates, but this is a fact. The game's full release date is the END OF THIS SUMMER. While I had announced a Kickstarter in the past, I am actually thinking I might not need one, as I don't want to start a Kickstarter just for publicity if I don't need to. The Greenlight campaign will launch alongside the trailer and demo, maybe +1/2 weeks to take some screenshots. I will make sure to post a ton once the time comes, so keep updated guys! I really appreciate all your support.

Lastly, if you want to get into contact with me here's a few ways!