Udate as of 9/21/14. Concepts, Development Progress, and More! [Lots and lots of development sketches included!]

Hello everyone! I'm back, and it's been awhile since my last "State of The Game" Update. This update may seem a bit more barebones compared to the others, but nevertheless it's still going to be quite important!

So first off, it's important to say that the Double Death team has been quite busy. We've decided to tear apart most of the stuff we don't agree with and completely redo just for you guys. We want to make Double Death as great as we can, and we felt that some of the stuff in the game just wasn't up to the par of quality we want to enforce. So, here's a list of things we decided to redo/add:

In order to redo the interface, we started trying to draft different concepts. Here was the first: 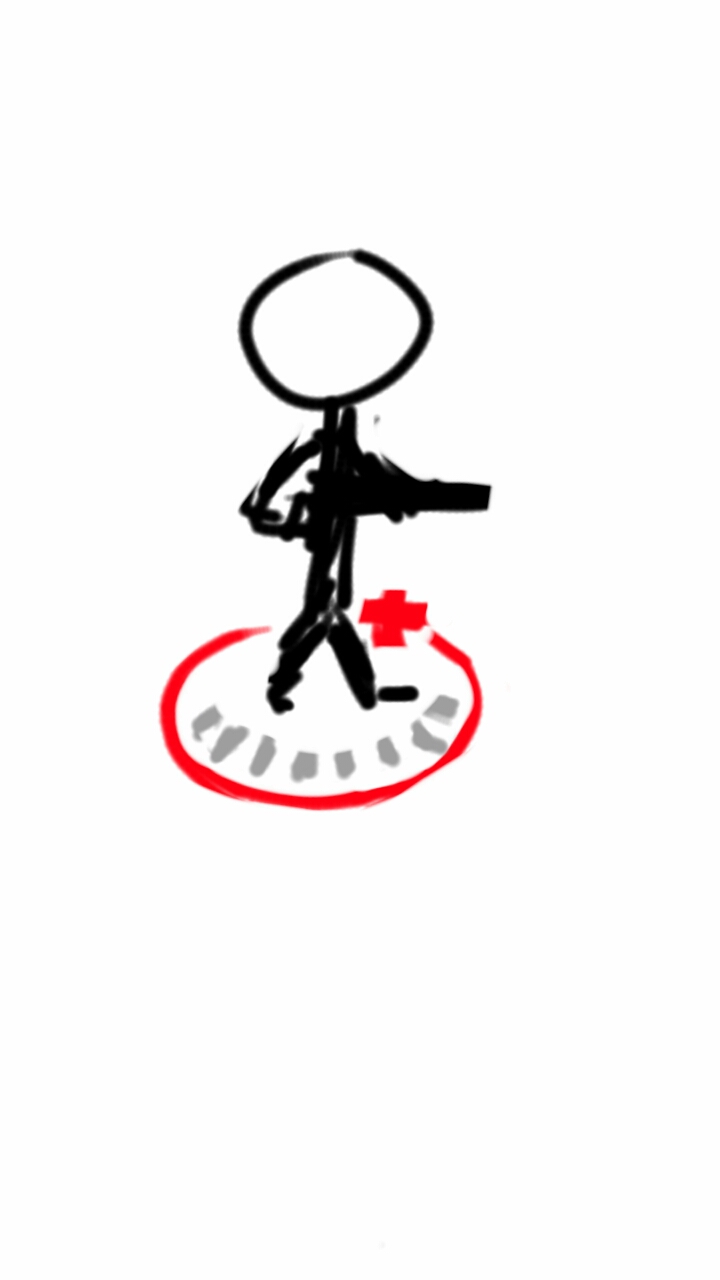 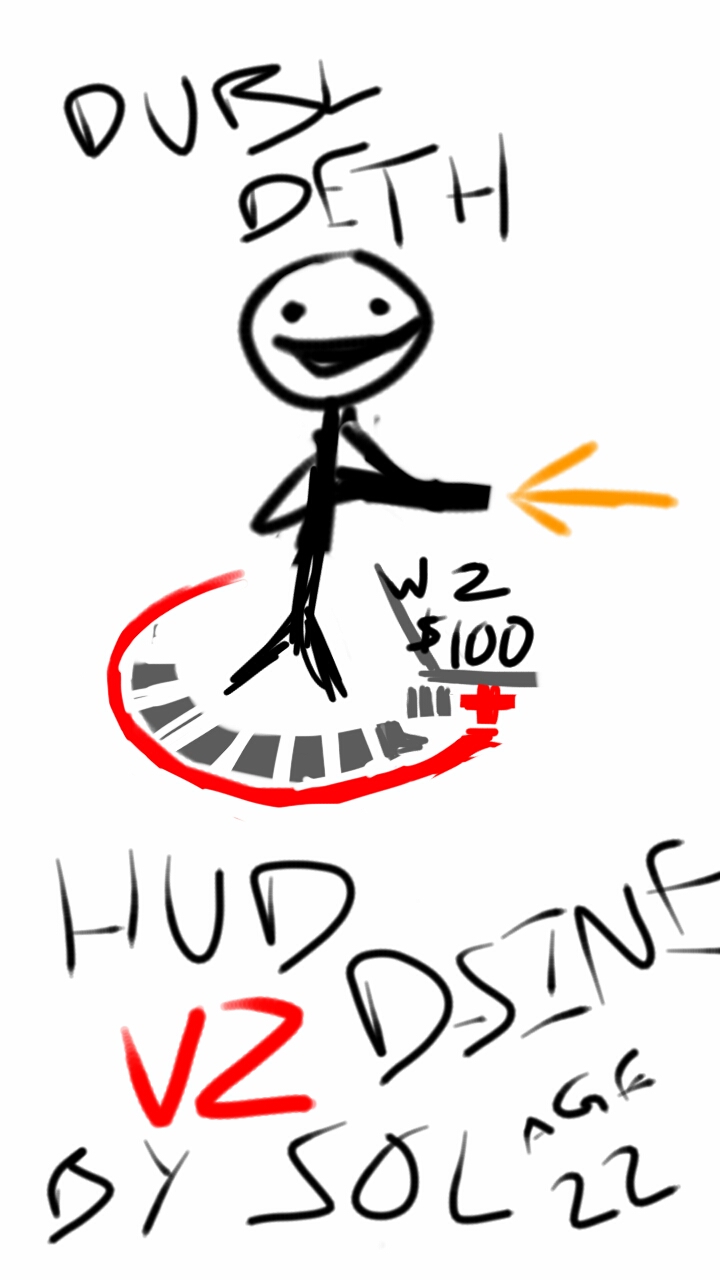 We decided on a centralized design, but were unhappy with its implementation:

So then we tried to make it a bit more pixel friendly, while keeping the centralized design: 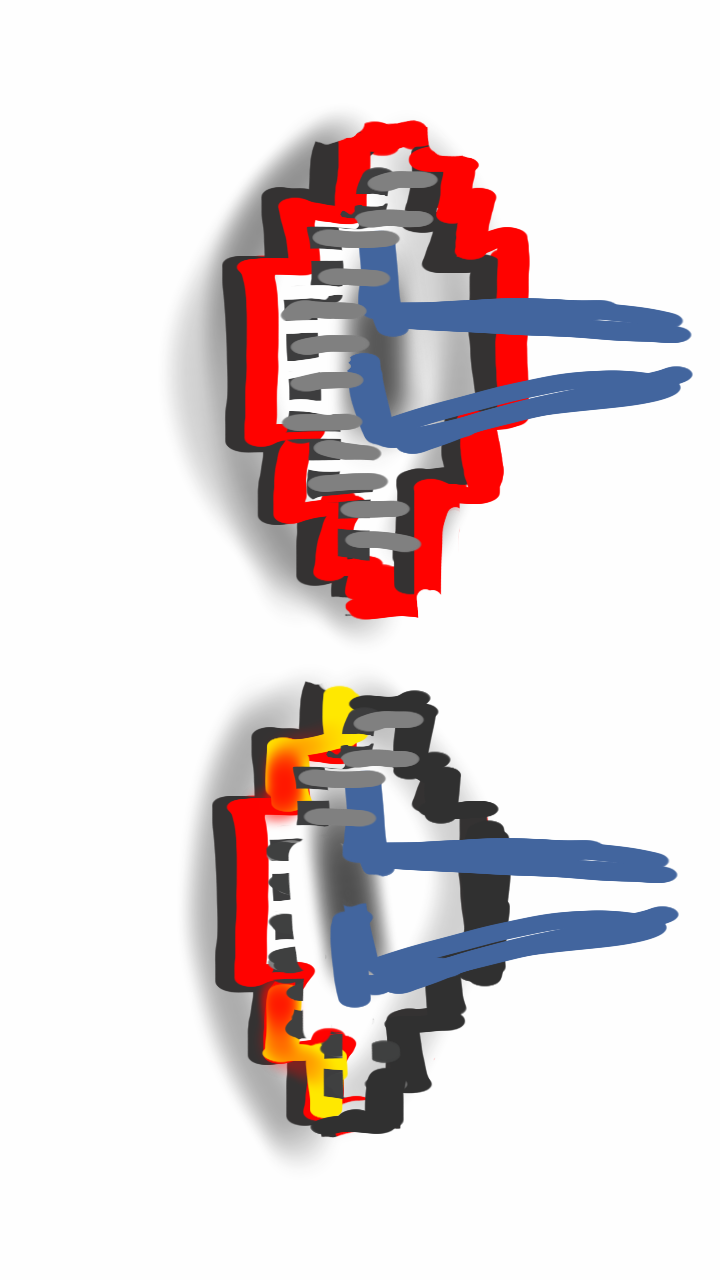 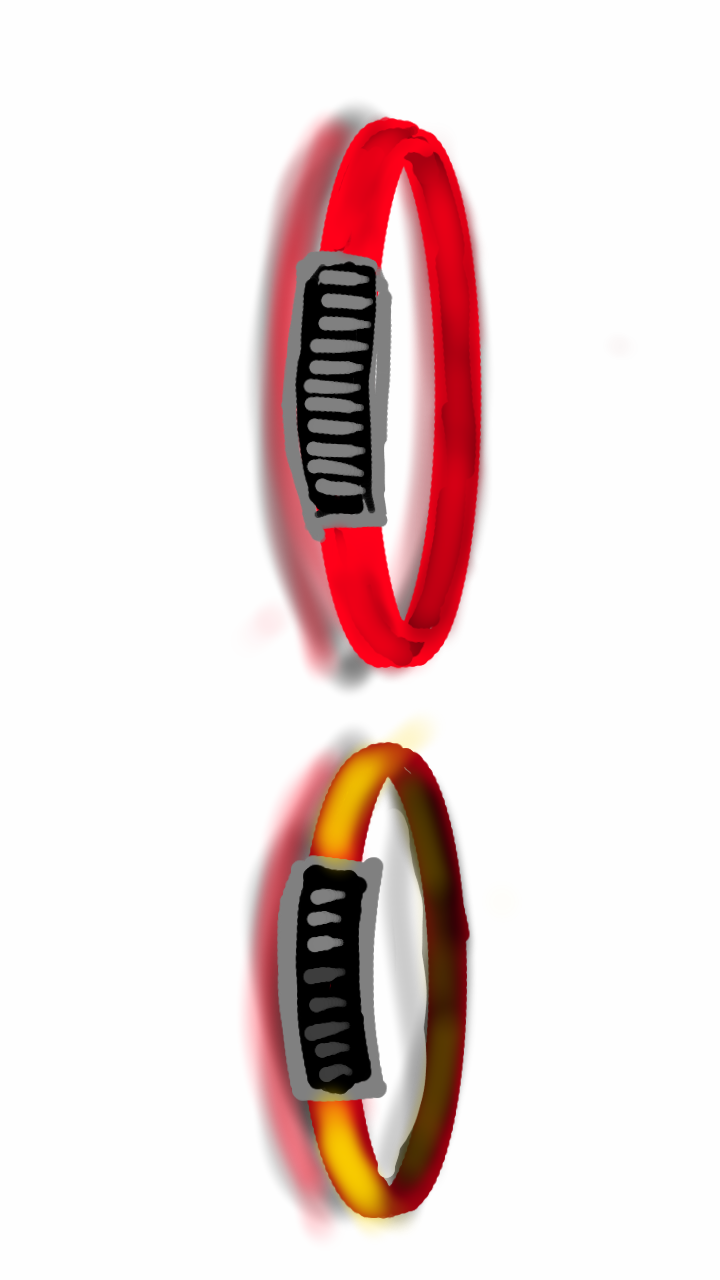 Neither of these really fit into the game's aesthetic though. That's when we finally tried one more sketch, and came up with this beauty: 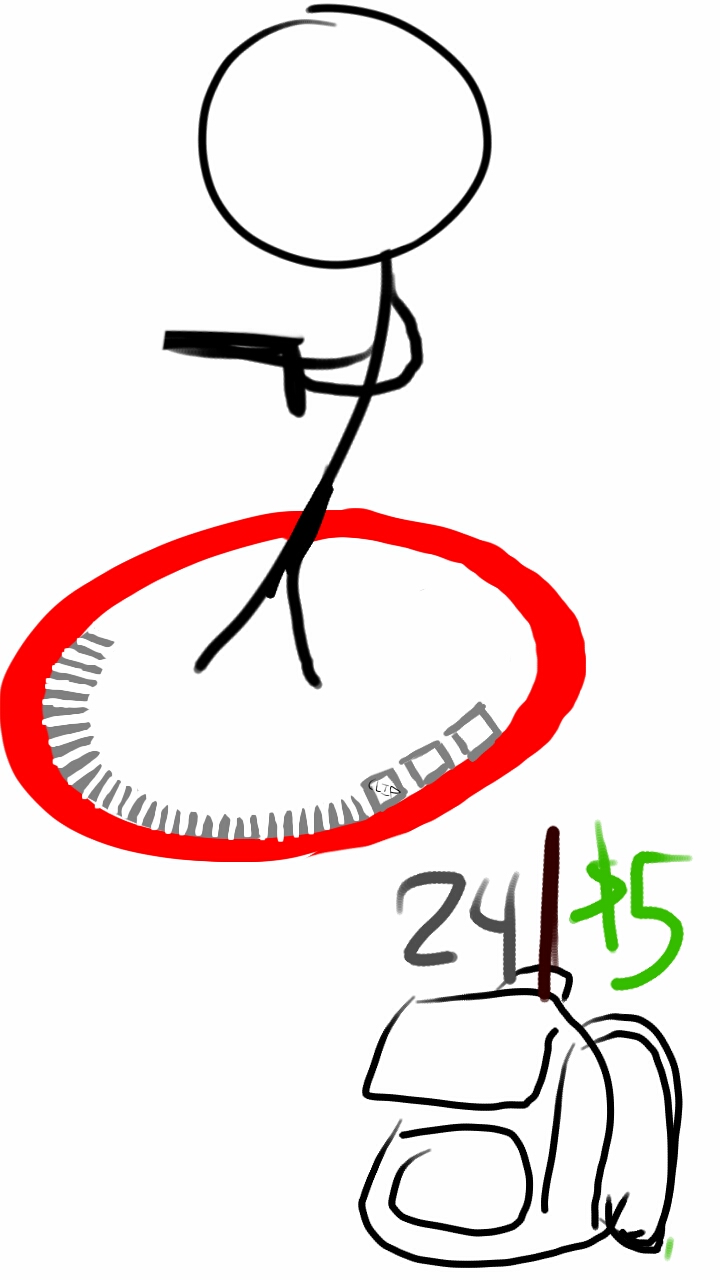 Simultaneously, we came up the backpack mechanic, as seen in the lower half of the sketch here.
This was the first step of implementing it into the game (minus the ammo bar and backpack, but with the new HP bar implemented):

Sorry for the AI glitching out! Since then I've also made it so the HP bar flashes yellow along with the player when damaged so it doesn't just skip frames.

Now, what is the backpack mechanic? Well, backpacks are going to be extremely useful to players. Each player spawns with a different colored backpack equipped. Without a backpack, you can hold up to $750 cash, 1 weapon, 2 medkits, and 50% of the weapon's max reserve ammo. With a backpack, you can hold infinite cash, 2 weapons, 5 medkits, infinite keys(used to open locked doors) and 100% of each weapon's reserve ammo. Backpacks can be dropped and traded with other players. Since they can be traded, possibilities are near endless. It allows players to basically transfer their stats between each other constantly, allowing for a lot more strategy at later waves and in harder gamemodes.

Here's a rough sketch of the backpack interface: 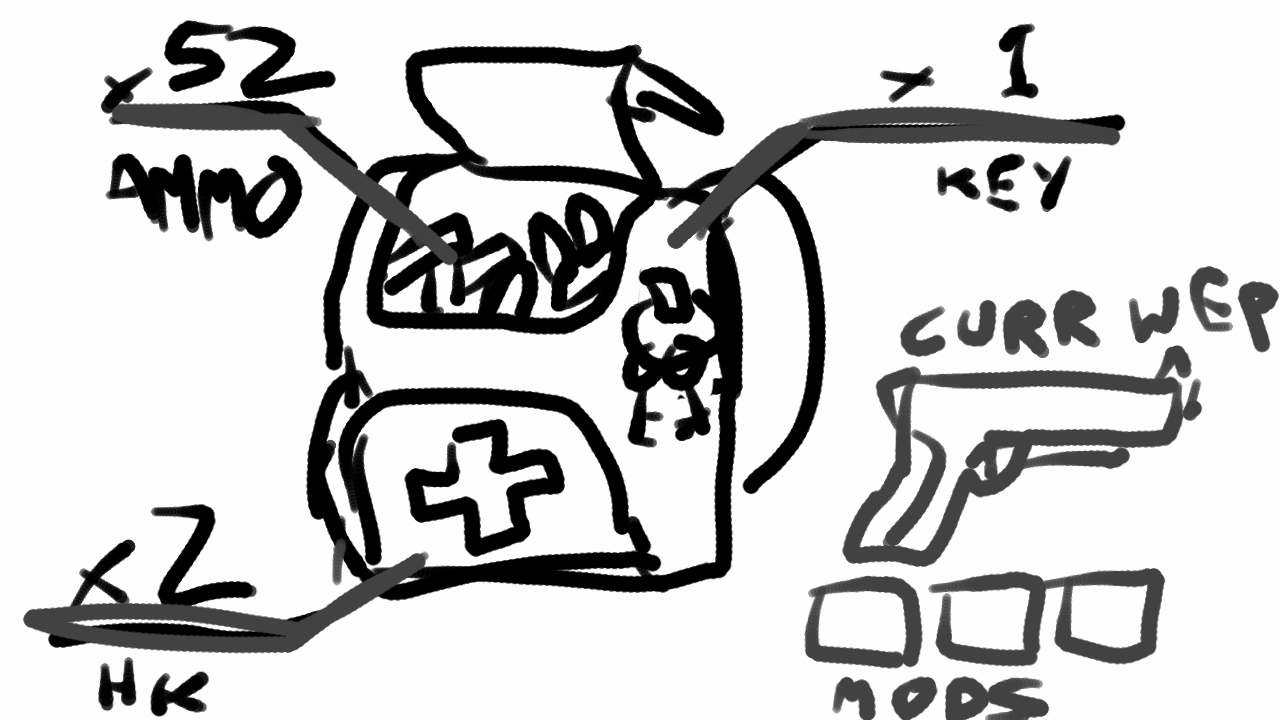 Now, here's a bit of a talk on the new weapon system. Basically, we've decided to add multiple weapons to the game to mix it up a bit. We thought only having the shotgun was kind of bland. So, here's the different weapons which are going to be implemented:

Each weapon will have its own perks and downsides, and weapon mods/power ups are now weapon specific. You can have 3 mods equipped per weapon.

We've also decided to implement two bosses into the game, which I teased on the TigSource devlog: 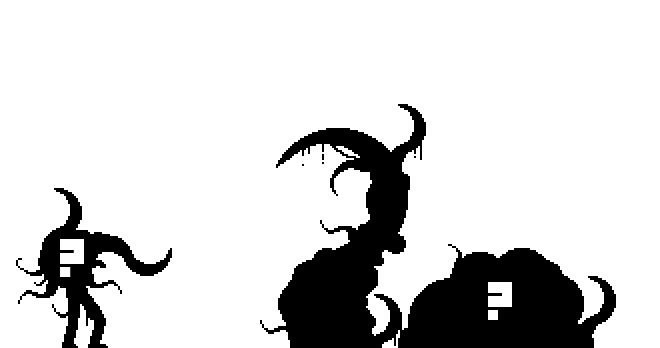 I then went on to even post one of the animations here for the big guy:

This guy here, The Kraken, will be a hidden boss on the Sunken map in Survival mode, and in arcade mode will be boss of the ship map. The other guy, who has yet to be revealed, will spawn in the final wave of each Survival mode and will pose as the last threat to players.

Lastly, I'd like to take some time here to talk a bit about the game's estimated development time. I am a busy person myself, and I do not work on this game on a set schedule, and instead I try to dedicate time to the game each day, even if it is only an hour or so. I have 3 other people working with me. The extremely talented artist and animator, James, works based on commissions. Sol is an awesome dude who helps with smaller details, such as additional animations and extra, smaller art assets. He also helps draft mechanics, ideas, and does concept sketches (as seen here!). He works a really time consuming job as well, so he tries to dedicate time to the game only when he gets a chance. After all, it's just as important to have free time for yourself! Lastly, there is someone who is working on the music and SFX, but at his demand, we've decided to keep it a surprise! He wants to really surprise you guys with his reveal. Because we're all organized over the internet and all live in different time zones (I live on the East Coast, Sol lives on the West Coast, and James and the Music dude live in England), coordination between myself and them can be hard. I've set the game at an estimated release date of about 6 months, so hopefully we'll see that through!

So, thanks again for tuning in everyone!
Next time I'll be covering the awesome Modding API among other things.