So just when you thought the HiB2 couldn't get any better, 6 games from the HiB1 have been added to the mix.

Alright so this news maybe a little late, but after the week we have had launching Desura, Indie Editors Choice, Mod Editors Choice and getting DDOS'd, I hardly think you can blame us! Plus this news is simply too good to miss, so in-case you missed it, it is worth checking out.

I am of course referring to the Humble Indie Bundle 2, a pay what you want indie program which as well as helping developers also helps charity. It originally launched with five awesome games: Braid, Machinarium, Osmos, Cortex Command, and Revenge of the Titans, but recently added another 6 from the first bundle: World of Goo, Aquaria, Gish, Lugaru, Penumbra and Samorost 2. 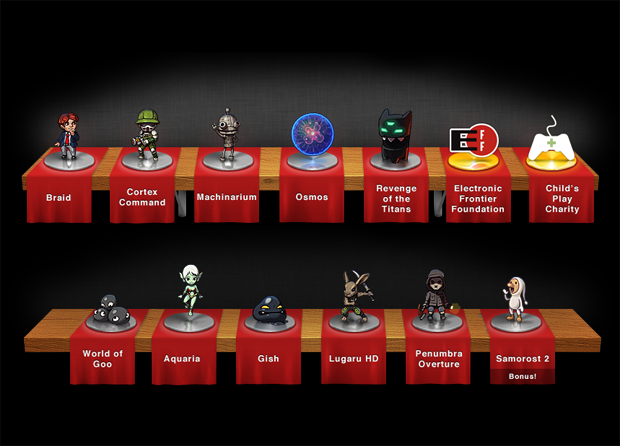 Better still, we are participating with the HiB2, so if you've brought the games you can activate them over on Desura. Give it a try, and support indies and us (ModDB and IndieDB!)

its either that or piracy.

So the whole point of this is to give people the option of what to pay AS WELL as helping good causes and your proud of yourself for paying practically nothing? People are right to vote your comment down.

I don't see anything wrong with paying 0.65$ to these games. It's the thought that counts. Rule is simple "pay what you want". He added something to the sum and if I were one of the developers I wouldn't mind. It's still a lot better than pirating these games.

I gave 10$ to first and haven't bought the second bundle yet because of lack of money in bank account (missing Steam sales is so painful), but if I had the money I really wouldn't mind giving away 1000$ to these great people.

So I'm willing to say "it's OK" to pay 0.65$ and win another supporter rather than saying "that's shameful" and win a hater.

Well thats up to you but to pay $1 that is then split what 14 ways or something including charity and the server hosting is not 'a lot better' than piracy because after the split its next to nothing anyway.

Quite frankly id rather have someone hate me for trying to stand up for something good than have them like me for doing nothing at all.

there are telephone services, u only have to call them and u give a dollar or euro or so. they get more money with it, cause everybody can spend that easily, and more ppl will do the same. if this would have been properly advertised would have been an epic win, in this case it was only a good idea. the guy got burried cause he was laughing about getting 10 games for only nothing...

These guys at Wolfire have some amazing PR. I think it was advertised quite well :)

BAD GUYS: stealing from kids and poor people since the year -47990

gaaah doublepost. Whatever, more time to yell FOR SHAME!

Accidents happen in the dark ^_^

Bought it last week and got a mail with access to the HB#1 games yesterday.
This is customer friendliness at its best, thanks a lot.

Desura activation not working.... =(
I activate my key, and then nothing shows up in the games tab. I'll have a look at it again tomorrow, too sleepy right now.

I think you need to restart

we are working on having the games show up instantly, at the moment there can be a 10 minute delay.

unless you hit the url: Refresh

thanks for using Desura too, we are going to make it rock just like ModDB & IndieDB so expect this to be only the beginning!

That bundle is just epic! 11 games for Win, Mac and Linux + Steam + 2 Soundtracks. Thats something I would wish from EA or something: You buy a game and then you can install it on 3 different OS.

How will it look like if the same deal is going to happen with Humble indie bundle 5 or 6?

I am really ******, I donated about 20 and NOW they release it with more games. I might just pay like a dollar, It's rather sad when this stuff happens.

If you already paid then you already get all the old ones too.
If you have not yet bought the pack then you need to pay above the current average to get them.

So the games from the HIB1 are on the pack? Cool

Me and my friend bought the first one. Damn, I pretty much enjoyed Penumbra! I´m thinking about buying the HIB2 pack. =D

I've never heard of this

Purchased most of these at full price, others I bought with the original Bundle (#1) and said what the hell and bought both packs again now. Got em setup both in Desura and Steam. Love these bundles and hope people are giving back to these developers. Surprised at how many ppl are proud to say they spent $1 :/

FAIL you counted the charities...

machinarium, Cortex Command, Penumbra, Rev. Of the titans....
those ones really deserve some money.

pure awesome! was so happy as i reseived the information with the first bundle via mail. thanks a million! great christmas present! :)

I already have all of them, but I payed 5$ anyway just to cheer you guys.

Ima see what happens if I send a hundred bucks.

Gave the average price. Hope it helps the devs!

Best deal ever, I bought mine last night. Spent $10 USD.

It would be nicer if we could pay using paysafe cards.

Best investment ever. I love this deal.