HUGE UPDATE 0.0.6.X and 0.0.6.X R1
What Took us so long?!?!!
well, we didn't mean it to take so long... but if you follow us on twitter you would know that my PC kidna gave up on me in the past few days so I was focusing on fixing it up while working on an update for the game!

How do we Pick The Version Names?
First thing first, let me clarify on how we pick our version names for the game! It is quite simple, if the update is minor, we choose to remain on the same 0.0.X and just add another number at the end for example `0.0.6` and `0.0.6.1`. The reason for that is because that all of `0.0.6.x` version will share the same folder and same resources. once the resources had changed, or it needs to save a new file (in this case the file is the player data) or if it needs to save a file in a different manner as before (for example if we changed the way keybinding behaved), we are forced to create a new folder for it, at which time we change the 3rd digit of the version (in this case to `0.0.6` from `0.0.5`.) Version `0.0.6` was a special case, it only had 2 very minor updates before it immediately changed and needed a new folder, so I decided to just create the next version as an "extended" version of `0.0.6` called `0.0.6R1` where "R" stands for "revision." Well, I hope that clarifies it!

0.0.6.X
summary
This is the initial creation of version `0.0.6` and this only had 2 sub-versions, which includes the addition of a job system, addition of a level and experience system, and addition of menus such as skill menu and soon inventory menu!

Menus
By menus we don't mean main menus and such, we mean menus you can use on the fly as can be seen in the GIF! The menus were programmed to be move-able as you play and they lay on the HUD screen meaning it stays static as you move, so you can leave the skill menu on the right left corner and it will remain there as you move your way through the map!
-Skill Menu

Experience/Level System We experimented using different formulas until we found one that we chose to stick to! For now each monster you kill will give you 5XP which is just for testing of course and in the real game each monster will give you different XP depends on their difficulty and level. Once you level up, you get 1 skill point to use which in this case upgrades our teleport ability!

Skill Menu Revision
This is a minor update to the skill menu that changes the layout as follows: 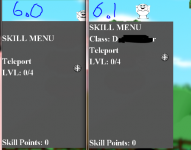 and I probably forgot a lot too...

We posted bunch of images on our gallery so make sure to go check it out!
Expect an update in the next few days! Hopefully tomorrow!
If you can't wait and want to know more about the next update check all the GIFs we posted and all of the leaks we post on twitter!

By the way... we finally replaced the chicken!