Post news RSS How we unbroke crafting in Crashlands

At the conclusion of our Alpha test we found that there was something very WRONG with how Player’s experienced Crafting in Crashlands. In short, the system we had constructed alternated between being boring and overwhelming. To solve this HORRIBLE problem we first had to examine why this might be the case...USING LOOPS!

This update is reprinted from the Butterscotch Shenanigans Dev Log.

At the conclusion of our Alpha test we found that there was something very WRONG with how Player’s experienced Crafting in Crashlands, our next title and a survival action-rpg hybrid. In short, the system we had constructed alternated between being boring and overwhelming. To solve this HORRIBLE problem we first had to examine why this might be the case.

Crafting, as it was

During Alpha, crafting a “Station” (the thing that shows a set of Recipes and lets you craft them) gave players immediate access to every Recipe that particular station had at its disposal.

OMG 34 NEW RECIPES I AM GOING TO VOMIT


The result of this Bulk Recipe-Delivery was that Players would begin the game overwhelmed by the breadth of what they could build. As they progressed, Players began to optimize their build path to access Stations as quickly as possibly, skipping the 350 other Recipes along the way.

The game was intended to be an exploratory adventure, more about the journey than the end-goal, but we inadvertently designed it to be entirely about crafting the next station!
After a lengthy design discussion, we realized we had ignored something essential when putting the Crafting system together: the importance of Recipes in the Game Loop.

Loops make up the underlying structure of all games. A Loop in its barest form is an Action combined with a Reward, where the Reward goes on to reinforce the next repeat of the Action (see Seth’s awesome talk on the subject, "Loops and Rockets").
Let’s take a familiar example. In Role-Playing Games players defeat monsters (action) and are rewarded with Experience Points and Loot (rewards), which make their characters more powerful, which in turn lets them defeat even bigger monsters, which grants them even more Experience and better Loot, which lets them fight even bigger monsters, ad infinitum (Looping).There can be many little loops within the overarching Game Loop - in Crashlands, the general structure of the Game Loop looks like the following.

Crashlands is a crafting game: the core driver of the Game Loop (and the sense of player progression) is the BUILD STUFF aspect of the game. Looking at the diagram above, we can see that BUILD STUFF feeds back to the other two parts of the Gameplay Loop (finding stuff and breaking stuff), making it the linchpin of fun. The FUNPIN, if you will.
The Gameplay Loop shown above is the skeleton of every well-known crafting title: Terraria, Don't Starve, Minecraft, Starbound, etc. So why don’t these games feel exactly the same?
Well, the differences in play don’t come from the Gameplay Loop at all, but rather what the player does in each Node in the Loop (the Find Stuff Node, the Break Stuff node, etc) and how fast each of the Sub-Loops turn over.
From the expanded Crashlands Game Loop below, we can see what the gameplay itself actually consists of at any given Node – the moment-to-moment player-actions that make the Game Loop flow.

Each "Node" in the loop is moved through using a series of interactions unique to the game.

Using the Stations as a sort of BULK RECIPE DUMP, we had inadvertently removed Recipes from the Looping aspect of the game. The Loop that they were intended to create was instead absorbed by the Stations, which gave the Stations an undue weight in driving player behavior.

To remedy this, we have decided to stop giving the players all possible recipes the moment they unlock a station. Instead, recipes can now be found out in the world when breaking down resources. Stations, once built, only house a few key recipes at first -- just enough to give the player some gameplay direction -- and are otherwise left to the player to fill-out by exploring and interacting with the world.

A Recipe crate flies out of a Sawgrass plant. The Recipe inside uses components from the Sawgrass.

Players then unlock additional Recipes by loot-drops from harvested resources. Many of those recipes will make future harvesting faster or allow access to higher-level resources. Players therefore break down resources to gain recipes to break down even more resources to gain even better recipes to break down still more resource... ad inifinitum.
In other words, Recipes got their own Loop!
The subsequent impact on the Crashlands' Game Loop looks like this: 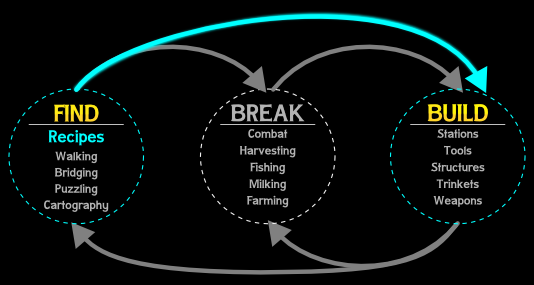 The addition of Recipes as a findable item enhances the Find Node and creates a new Loop with the Build Node. The system grows more robust!


Not only does the new loop empower the actions within the FIND Node in the Game Loop, but it creates a greater driving relationship between the FIND and BUILD nodes!
Huzzah! With a bit of basic loop theory we're able to excavate a design flaw and turn it into a strength!