Part three of a three part series of illustrating the basics of the gameplay in Office God.

In Part 1 of the "How To Play Office God" blog series we covered the basics of what you're trying to do as general manager, and in Part 2 explored some of the additional tools you'll use along the way. Now in Part 3 we'll examine what can go wrong. 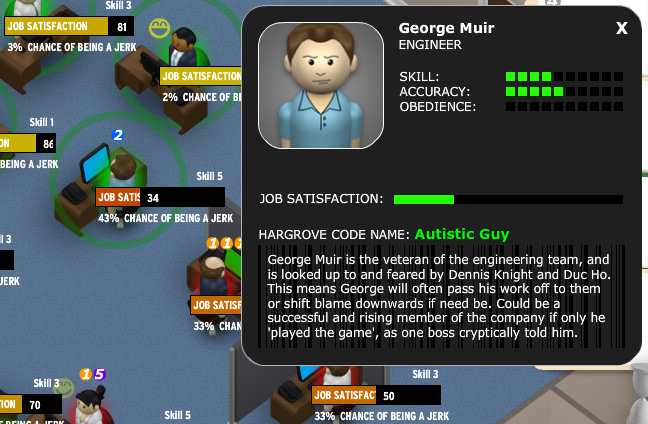 Every employee has three stats:

Yup, that's right, a puzzle game where sometimes your moves are changed due to incompetence or flat out ignored because of a bad mood. Do they make Nobel Prizes for browser games? We'll soon find out!

In the previous screenshot we see George Muir has an obedience of zero. Combined with his current Job Satisfaction this creates a JERK PROBABILITY of 43%, displayed below the character himself, anytime you're assigning tasks. As his Job Satisfaction increases, his Jerk Probability decreases with his rising contentment, as you'd expect. Similarly, as each employee becomes less satisfied with the job, the higher their Jerk Probability becomes. Satisfied employees are productive employees.

What a jerk! That's what happens when you roll the dice and lose. Once steaming angry like this, the employee will refuse to take on any more work until the next day or until they are assigned an item that de-jerks them. Some events and emails in the office can also de-jerk employees, so hold on to those opportunities.

Slightly less infuriating than a jerk employee is one who screws up your work. When this happens you'll either need to conform the rest of the department to this mistake in the way that a real office often bends to the bottleneck employee , or more likely clear off the workload entirely with a 7 and start again.

That wraps up the gameplay tutorial blog series. There are certainly other non-gameplay problems and opportunities you'll encounter in Office God, from conflicting boss directives, to impossible goals, to employee mutinies, to innumerable outside pressures. But those are best experienced on your own. Coming soon!