We will look today at what you need in order to make a nuclear fission bomb. You need some money, as it would really help if you were the prince, sultan or other royalty of a small, but rich state. If not, you need to know on a first name basis some evil leader with lots of cash, oil, diamonds and so on, of a small but ambitious country, with a need for revenge on the world.

Step 1 - What is a nuclear fission bomb?

Fission bombs derive their power from nuclear fission, where heavy nuclei (uranium or plutonium) are bombarded by neutrons and split into lighter elements, more neutrons and energy. These newly liberated neutrons then bombard other nuclei, which then split and bombard other nuclei, and so on, creating a nuclear chain reaction which releases large amounts of energy. These are historically called atomic bombs, atom bombs, or A-bombs, though this name is not precise due to the fact that chemical reactions release energy from atomic bonds (excluding bonds between nuclei) and fusion is no less atomic than fission. Despite this possible confusion, the term atom bomb has still been generally accepted to refer specifically to nuclear weapons and most commonly to pure fission devices.
Step 2 - What do you need? 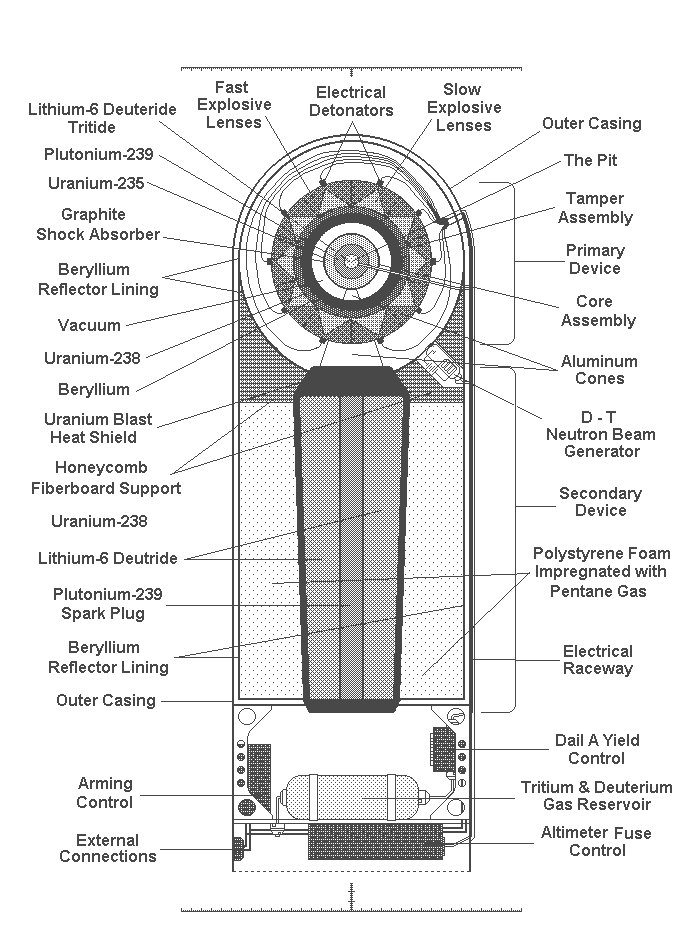 a. The fissionable material

Plutonium239 isotope. Around 25 pounds (10 kg) would be enough. If you could find some Uranium235, that would be good, but not great. You would need to refine it using a gas centrifuge. The uranium hexafluoride gas is piped in a cylinder, which is then spun at high speed. The rotation causes a centrifugal force that leaves the heavier U-238 isotopes at the outside of the cylinder, while the lighter U-235 isotopes are left at the center. The process is repeated many times over through a cascade of centrifuges to create uranium of the desired level of enrichment. To be used as the fissile core of a nuclear weapon, the uranium has to be enriched to more than 90 per cent and be produced in large quantities.

You could try buying it from a former Soviet Republic, or from Iran, since they're trying so hard to produce it. North Korea is not ready yet, and unfortunately, Iraqi dealers retired from the business.

b. The explosive to start the nuclear chain reaction

100 pounds (44 kg) of trinitrotoluene (TNT). Gelignite (an explosive material consisting of collodion-cotton (a type of nitrocellulose or gun cotton) dissolved in nitroglycerine and mixed with wood pulp and sodium or potassium nitrate) would be better. Semtex would be good too, but it's a bit hard to get, these days.

To fabricate a detonator for the device, get a radio controlled (RC) servo mechanism, as found in RC model airplanes and cars. With a modicum of effort, a remote plunger can be made that will strike a detonator cap to effect a small explosion. These detonation caps can be found in the electrical supply section of your local supermarket. If you're an electronics wiz, you should be able to make it using a cellphone.

The explosion shock wave might be of such short duration that only a fraction of the pit is compressed at any instant as it passes through it. A pusher shell made out of low density metal such as aluminium, beryllium, or an alloy of the two metals (aluminium being easier and safer to shape but beryllium reflecting neutrons back into the core) may be needed and is located between the explosive lens and the tamper. It works by reflecting some of the shock wave backwards which has the effect of lengthening it. The tamper or reflector might be designed to work as the pusher too, although a low density material is best for the pusher but a high density one for the tamper. To maximize efficiency of energy transfer, the density difference between layers should be minimized.

You will need to get the fissile material to the critical mass in order to start the chain reaction, which depends upon the size, shape and purity of the material as well as what surrounds the material. Your weapons-grade uranium will have to be in subcritical configuration.

First, you must arrange the uranium into two hemispherical shapes, separated by about 4 cm. Since it's highly radioactive, the best way do it is to ask the friend owning the small country to let you use one his facilities. You could use a nuclear plant, a steel factory or even a well equipped pharmaceutical installation as a disguise for your plans.

It is not sufficient to pack explosive into a spherical shell around the tamper and detonate it simultaneously at several places because the tamper and plutonium pit will simply squeeze out between the gaps in the detonation front. Instead, the shock wave must be carefully shaped into a perfect sphere centered on the pit and traveling inwards. This is achieved by using a spherical shell of closely fitting and accurately shaped bodies of explosives of different propagation speeds to form explosive lenses.

After a few careful calculations, all you need now is to carefully pack and transport your nuclear bomb to the targeted location. If you happen to be an Al-Qaeda fan, you should try to infiltrate a military facility, for the psychological effect. Watch it, though, they are usually well guarded!

Step 4 - Disguising the bomb and placing it for detonation

The smallest nuclear warhead deployed by the United States was the W54, which was used in the Davy Crockett recoilless rifle; warheads in this weapon weighed about 23 kg and had yields of 0.01 to 0.25 kilotons. This is small in comparison to thermonuclear weapons, but remains a very large explosion with lethal acute radiation effects and potential for substantial fallout. It is generally believed that the W54 may be nearly the smallest possible nuclear weapon, though this may be only smallest by weight or volume, not simply smallest diameter.

The best way to disguise it would be in the form of an ordinary appliance, like a copier, a widescreen TV set, or any other inconspicuous electronic device.

Now, all you have to do is transport it to the selected location and get to a safe distance of a few tens of miles, but not far enough to get out of the range of the remote detonator. That is why a cellphone is strongly recommended for its wide range capabilities.

I will necessarily make it on days off

great job dude i go on my workshop maby i can made it ;]

i will get rid of my neighbors i hate them =,=

hope you live on the countryside with your nearest neighbour 30 miles away, or atleast that you got a bunker in your cellar :P

you know, if you dont have enough money you can use mentos-dietcoke combo bomb as the alternative. XD

Damn,I'm getting a headache...I would rather capture the Nuke missile silo ...for the GLA!!

Duds Warring Do not touch the top of the rocket it will make a BOOM:))
How whats to make one!!:))We will uset the destroy the communists :)) (No offense)

you guys are freaking terrorists

Just about Everyone is a Terrorist when it comes to the Internet , Heck If you know 4 Chan's /b/ Spawns Demonic Terrorists, that place is the very location where even Al Qaida and the Taliban Dare not enter.

But when it comes to real life , its different .

Really, this information is this easy to find...
Next, thing you know it's Weekend Projects; Nuclear Missiles.

ok iam starting on this right now :D FOR HOLLAND!

i think i would have to scudd paris :)

Btw, is that what they call a fission-fusion bomb? This page should be changed to how to make your own fusion bomb!