A short article on how two different ideas gave birth to the concept of Autumn, plus a brief description on how spirituality is present in the game, both in direct and visible forms as well as in game design decisions.

How Autumn came to be

The idea for Autumn changed many times during the brainstorming phase and during the development itself, although the core aspect of what I wanted to transmit remained the same. I can say that the origin of Autumn came from two different ideas:

The first one was when had just finished moving to where I live now. I was driving in the mountain with my wife and we were right in the middle of Autumn. The scenery was breathtaking, trees with vibrant yellow, orange and red colours, leaves floating in the air, a beautiful sunlight that filled the atmosphere. I remember looking at all that and thinking to myself “one day, I’d like to make a game that resembles this”

The second one was in an online discussion of game ideas. One person had written about an idea for an open-world exploration game where you have nothing to do, but can just enjoy the views, the sunsets, and then go to a library and read something, learn and use it in the game world. 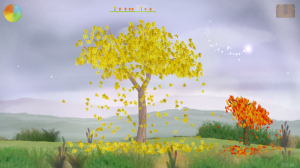 I put these two together and Autumn began to take shape as a “world” where there are no big objectives but to enjoy it and learn. The learning aspect is important, in fact, it is the main purpose of the game. But I didn’t want to teach about worldly things or make up game stuff. Rather, I wanted to use it as a medium to talk about what I consider the most vital aspect of our lives: the spiritual side.

The spiritual aspect of Autumn

Where is spirituality present in Autumn? Well, the easy and obvious answer is in the text items you collect for the chest. These come in the form of Quotes, Inspirations (stories, poems, thoughts), or longer Spiritual Teachings. This is what the player aims for and struggles to get as the game is played. The purpose being to acquire all of those items. (although I can not say the final number, an early estimate indicates around 100 quotes, 50 stories and around 30 teachings).

Then there is another side, invisible to the player, which is how spiritual concepts were introduced in game design decisions. They don’t need to be visible, as the purpose is to make the player realize, while playing the game, why some things are as they are. The spiritual connection may not be evident at all, but that doesn’t matter, as what the player perceives will stay in his mind and sooner or later, the link will be made. 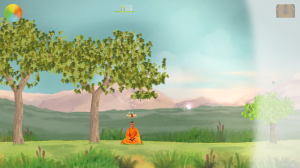 I will give just one example here. The Chest collects all the learnings and what the player can do in the world (trees, world items and spiritual texts). The game can not be saved. That means when you decide to exit the game, all that was done in the world will be lost, you’ll have to leave it behind. But, whatever was acquired, stays in the Chest and the Chest is permanent across all the games. So if you managed to acquire a new tree specie or a new spiritual teaching, it will be available the next time you play. So, game after game, the Chest grows.

This is connected to the spiritual concept of life, death and rebirth. This life, this world and whatever you did has to be left behind. In the next one, a new world with new challenges will be presented to you. But you don’t go empty handed, all the learnings and all the growth done previously will be part of you, even if unconsciously. Your state of mind, your spiritual awareness and your consciousness is an ever-growing process, life after life, so is the Chest, game after game.

There are many other examples like this one, but I prefer to keep it less obvious and not spoil some parts of the game