Hostile Takeover 2050 has a new release. Much has been polished and added over the previous few months, including a new area of the map, and some "Tactical Enhancements" for the CorpSec

Hi All, We're back with a new release! Much has been added and polished.
The team took a short break after the last release for Make Something Unreal Contest Phase 3, and have been continuing work on the mod.
The finalists and winners were announced for Phase 3 a few weeks ago, and HT2050 got an honorable mention which we are pleased with. Congratulations to all Finalists and honorable mentions!
We learnt a lot in the lead up to, and after the last release of the mod and have taken all that on board to ensure this release outshines the previous release in every way. We've had some encouraging feedback from a few players on the server and also a few good suggestions from comments on ModDB. Thanks for the feedback and keep it coming.
We've been focusing on polishing the user interface, controls, objectives, scoring and communication. We've also added a new area on the map, the medical wing. In this wing there will be a few procedure rooms where cyberware is surgically installed into patients, as well as consulting rooms, store rooms, a lecture hall and more. We've also polish up some other areas of the map, such as the courtyard.
We've also decided to add different but limited cyberware abilities to the CorpSec players to spice up the gameplay for the CorpSec. These are called "Tactical Enhancements".
We've put up a short video giving a quick preview of gameplay. Make sure to check it out. 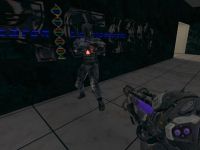