But then, we showed the game to everyone and the reception was so much more than we could have hoped for. It only became more intense after release, too, so we couldn’t help but start working on something a little extra.

Today, we’re thrilled to announce that we’re working on two free content updates for Squadrons through the holiday season to show our appreciation for this wonderful community. And, perhaps most notably, it’s greatly inspired by your feedback and requests!

Let’s get into it.

The first update will come this month on the 25th of November as part of Update 3.0. With it, there will be additional fixes, balancing changes, and tuning. Full details will be provided in its release notes, but the highlights are a new map and components coming to the game!

We’re adding a new map to multiplayer! A fan-favorite location from the single-player story and one we’ve seen requested for multiplayer is Fostar Haven from the game’s first prologue mission. In this update, the map will be added to Fleet Battles and the Dogfight mode. 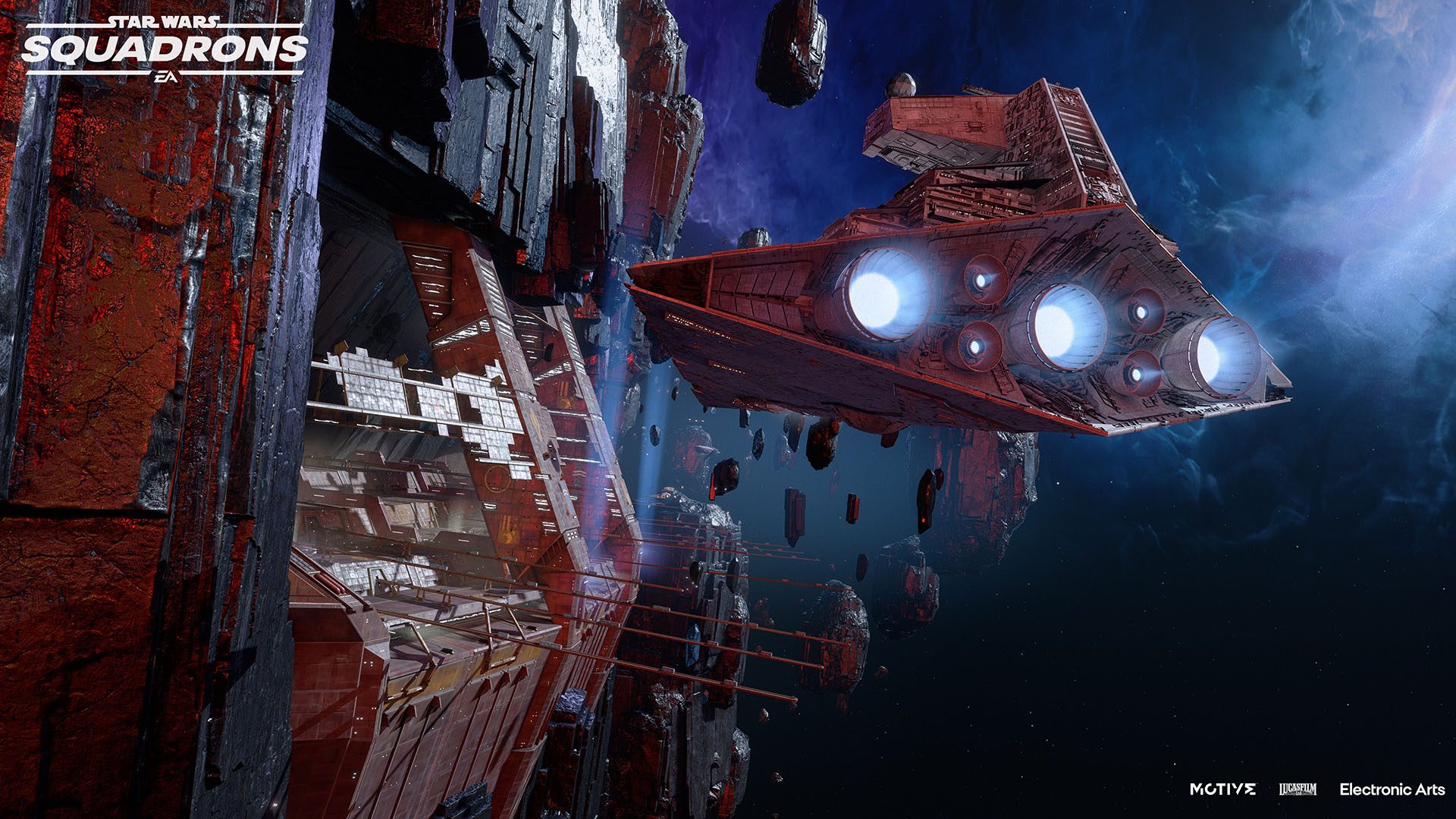 Set in a remote, lawless area of space under the light of twin stars, this map has been updated from its story mode counterpart to provide a new experience that should fit well with the other six maps. In the Prologue of Squadrons, which is set at the height of the Galactic Civil War, Fostar Haven was an isolated trading station that welcomed smugglers and pirates. Helix Squadron was sent there to search the cargo docks for Alderaanian refugees.

Now, four years later, the denizens of Fostar Haven have made a few upgrades to their station, trusting neither the Empire nor the New Republic. You'll have the chance to weave through the crowded dockyards or take the fight to open space.

With this first update will come four new components. For Fighters and Bombers, you’ll be able to use the Boost Extension Kit, a component that, when used, gives your starfighter a full boost. It’ll then recharge over time and can be used again. This will help these starfighters be able to change the pace of the battle in a new way, such as by giving them the ability to change the tide of dogfights or to get out of engagements with flagships if used wisely.

Next, we’re giving Interceptors and Fighters a way to provide more assistance against capital ships and flagships (or, with a steady hand, against starfighters, too). They’ll be getting the Ion Rockets, not unlike the Barrage Rockets they currently have. These will be great for hit-and-run attacks to strip enemy shields. These rockets move at half the speed of standard rockets, but they can be used at the same time as other components, including their non-ion counterparts. Time them well for the best results.

Bombers and Fighters (the latter with half the ammo count) will also be receiving the Prototype Piercing Torpedoes, providing these two ships with a new tactic for taking on capital ships. Though these torpedoes do less overall damage than others of their class, they have the ability to bypass capital ship and flagship shields, making them very well-suited for striking enemy flagship subsystems before shields have been taken down.

And of course, we couldn’t forget the U-wing and TIE reaper. They’ll be getting a new way to support their allies when taking on enemy capital ships and flagships with the Anti-Material Rocket Turret. Though this turret doesn’t target enemy starfighters, it’s very well poised to take on flagship subsystems, capital ships, and even turrets and other deployables from enemy support ships.

December will bring some of our most requested content to date, providing a nice, final thank you gift for the holidays via Update 4.0. Like its predecessors, it’ll also be host to bug fixes and other changes, all detailed in its own release notes.

That’s right, we’re adding two new starfighters! One for the New Republic and the Galactic Empire each to round out your squadron. Let’s start with what’s deploying into the New Republic’s hangar first. 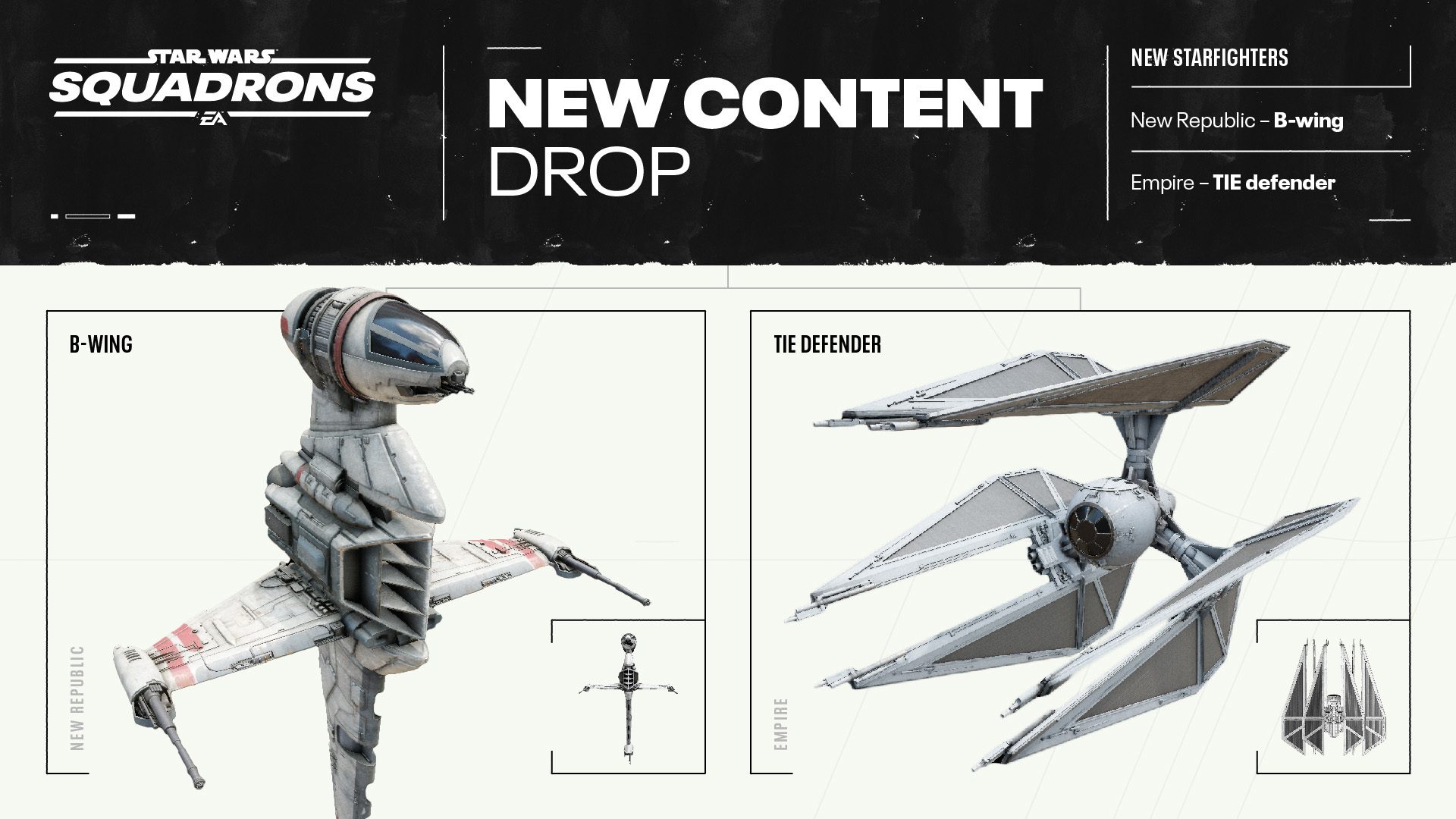 Designed as the “Blade Wing” prototype by Mon Calamari engineer Quarrie and finely tuned under General Hera Syndulla’s guidance, the A/SF-01 B-wing starfighter makes its way into the New Republic’s fleet in this update.

Naturally, there’s a fitting counterpart for it going to the opposing faction, too. From the mind of the brilliant military tactician Grand Admiral Thrawn and Sienar Fleet Systems, the TIE/d “Defender” multi-role starfighter will join the Imperial Navy as well.

These two starfighters are as powerful as they are iconic, though understandably balanced out for the purposes of the game. The B-wing will be categorized as a Bomber-class starfighter and the TIE defender will be a Fighter, each being able to use the components relevant to their faction and class, but they’ll also come with their own unique aspects in line with what you’d expect from them, such as the B-wing with its gyro-cockpit and swiveling wings and the TIE defender with its shields.

These functions and a couple unique components will help them differentiate themselves from the other starfighters in their classes and factions, but we’ve also made sure they aren’t outright better by default. There’s still going to be good reasons to pick a Y-wing over a B-wing or a TIE fighter over a TIE defender and vice versa. It’ll depend on your playstyle and what the situation calls for.

And of course, above all else—well, maybe aside from the cosmetic of The Child—there’s something that’s been greatly requested to be an addition to the game: custom matches! We were so excited from the moment we heard about your community-run tournaments to actually getting to see them in action, so we knew this was something we had to provide in some way.

Custom matches will allow one to five players per side across two teams to play on any of the (now) seven maps in both Dogfight and Fleet Battles. There will also be some additional restrictions and modifiers that you can change. These include things like hull/shield/damage modifiers, changing capital ship health, restricting certain starfighters, and other tools to help you change how you play. With this, there will also be a custom matches server browser for you to search through private matches made by your friends as well as public ones made by strangers.

We say this a lot, but this game was a passion project for the team. Getting to see our community be just as passionate about it, though, is something we’ll cherish. To close out this Pilot Briefing, here are some thoughts from our Creative Director, Ian Frazier:

From the earliest days, Squadrons has been a labor of love for our team, starting with just a handful of developers whose fond childhood memories of flying X-wings and TIE fighters in other games inspired us to create something new.

Ever since the launch of the game, it’s been an incredible joy to see players around the world climbing into the cockpits of their favorite starfighters, immersing themselves in fleet battles, building squadrons of their own throughout the community, and generally just sharing in the sheer love of Star Wars space combat that has fueled this project since its inception.

Your enthusiastic support for Squadrons has enabled us to expand upon it further in all the ways outlined above, and I couldn’t be more thrilled. I’m particularly excited about the Custom Matches feature because it will allow you, the community, to take more ownership of the game and create your own experiences for a long time to come.

Thank you for putting your faith in us, thank you for joining the Squadrons community, and thank you for helping us to make the game even better through all your feedback. And especially, a big thanks to those of you who supported us even before launch. It's because of your backing that we were able to get a bit of a head start on concepting all this cool new stuff. You really did make a difference. Take care, and see you in the stars!

Well, I couldn’t have said it better myself. And since Ian stole my line, I’ll close with something a bit more special than usual. . . .