"How is everything?" RA3 Bullfrog It's been a while, but we've finally managed to make an update! YAAY!

Hungary – near the town of PoroszlÓ 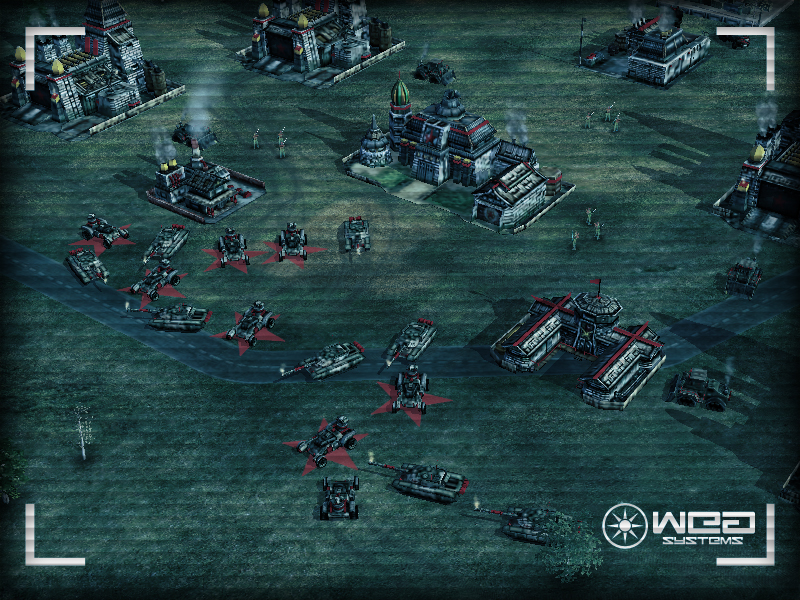 “Our tanks have failed to break the enemy lines!”, screamed the field officer in the radio, ”We must retreat! The enemy forces have overwhelmed our positions and without support we have no chance to resist a new attack wave.” “Captain!”, the voice in the radio yelled back, “You will hold the line no matter the cost. It is imperative that we don’t lose this location. High Command has authorized reinforcements. Just hold the line! That’s an order!”. Captain Karl Strauss is a high ranking officer sent by WEA High Command to aid the Hungarian Defense Force. His mission was to train and support the Hungarian resistance and to ensure that their eastern allies don’t fall to ADF occupation. After months of skirmishes with ADF forces, his army was crippled, and his men lost all the will to fight.

He needed a miracle.

“Matyas, take your men and secure the southern entrance to our base.”, Strauss ordered his trusted officer, “High Command denied our retreat.“ “With all due respect Captain.”, said Matyas, “You and I both know this is God damn suicide. The men are already falling apart. This is madness!”. Matyas is the leader of the Hungarian Resistance. Before the ADF invasion, he was a lieutenant in the Hungarian Army, but after a terrible defeat against the ADF forces, he was forced underground, and later, started the resistance.

“Support is on its way. We have to hold on just a bit longe…”, the sound of a large explosion interrupted them, immediately after, a second explosion cut the air and shredded the command tent. “WHAT THE HELL IS GOING ON OUT THERE!?” Matyas exclaimed as he rushed out to check on the situation. Enemy tanks were pummeling their improvised defenses, over half of their combat vehicles have been destroyed.

Strauss peeked out of the tent. There was chaos all around. Resistance soldiers were running from one position to another trying to fend off incoming enemy troops, their remaining tanks were being shredded by enemy anti-tank weapons. The enemy forces we’re crushing them faster than they could regroup. “These resistance warriors lack proper training. How am I supposed to hold the line with them?” Strauss thought to himself.

Matyas rushed back to the tent. “Matyas, how’s your situation?” “Not good”, Matyas exhaustedly blurted out, “ We are getting hammered out there. Where are the fukken reinforcements they promised us?” “Just hold on, they’ll be here.”, Matyas peeked out of the tent, “Yeah well, let’s just hope we’ll still be here when they arrive.”

Finally after an eternity of fighting, the enemy makes a temporary retreat to resupply. “Soldier, come here!”, Strauss shouted to one of his men, “What is the situation on our remaining tanks?” “Sir! They’re too weak to take the enemy tanks head on. Our only chance is to flank them, but it’s getting increasingly difficult due to all this rubble.

Then Strauss has an idea “If we can’t flank them, then we’ll just have to outlast them” “Sir?”, asked a confused soldier, "Tell the men to strip down and gather as much steel as they can from the tank husks and the surrounding area before night fall. I have a plan.”

Strauss ordered his tanks to move to defensive positions at the 2 base entrances. After the tanks were moved, he ordered his men to get all the steel they’ve gathered and weld them into really strong barriers along the sides and front of the remaining tanks. Although the plan seemed crazy, his soldiers followed it. By morning the few remaining tanks were turned into heavily reinforced defenses. 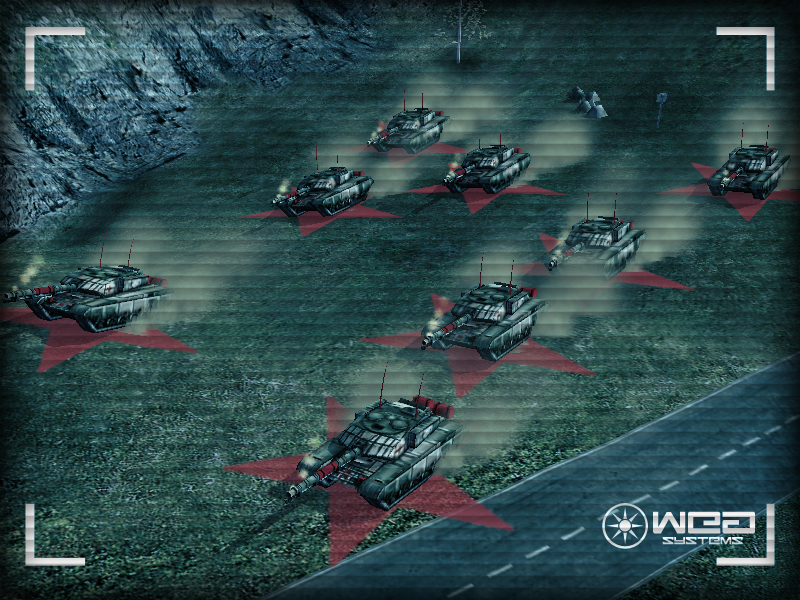 “Sir enemy forces are approaching”, said one of the soldiers to Strauss as he was checking the improvised defenses, “Everyone get behind the barricades!” His men immediately took cover behind the reinforced tanks. “ This is it men, it’s now or never!”, shouted Strauss as he stood to address his men, “The world will know that on this day free men stood against tyranny, that few stood against many and after the battle is over the ADF will cry with tears of their own men’s blood!”

The enemy tanks opened fire, but their shells were unable to penetrate the heavily fortified improvised defenses. “Now!”, as the enemy tanks we’re reloading, Strauss’ men rose up from the barriers and opened fire on the tanks with anti tank rockets, taking out several tanks at once. The added armor plates on the tanks made them highly resistant to enemy fire, combined with support from anti tank infantry, it allowed them to rapidly destroy incoming enemy vehicles.

As Strauss was ordering his men around, an incoming radio transmission interrupted him.

"This is Archangel 3, Captain Strauss are you there?” “This is Captain Strauss, you guys sure took your God damn time.”, the transmission continued, “We are just a few clicks away from your position. Tell your men to prepare for an airstrike. ”THAT’S IT?! One airstrike?!” Strauss replies angrily, “Where are my reinforcements? How the fuck are we suppose to hold the line with…” “Don’t worry sir.”, the radio cuts him off, “We have more. The airstrike is just the foreplay.“

A couple of minutes later, the enemy line was decimated with a swift and precise air strike. As gunships were cleaning out the last remaining ADF forces, a large dropship landed and what seemed to be a female silhouette came out and approached the Captain.

“Sergeant Hellene Mendez reporting in Captain, I brought you your salvation. We brought you heavy weapons, medical supplies and tons of ammunition. The ADF already knows of our involvement in this country so we might as well make sure they don’t occupy it."

Hellene looks around, “If I may ask Captain, what the hell happened to your tanks?” Strauss looked at his creations, smiled, looked back at Hellene and said “We improvised.” 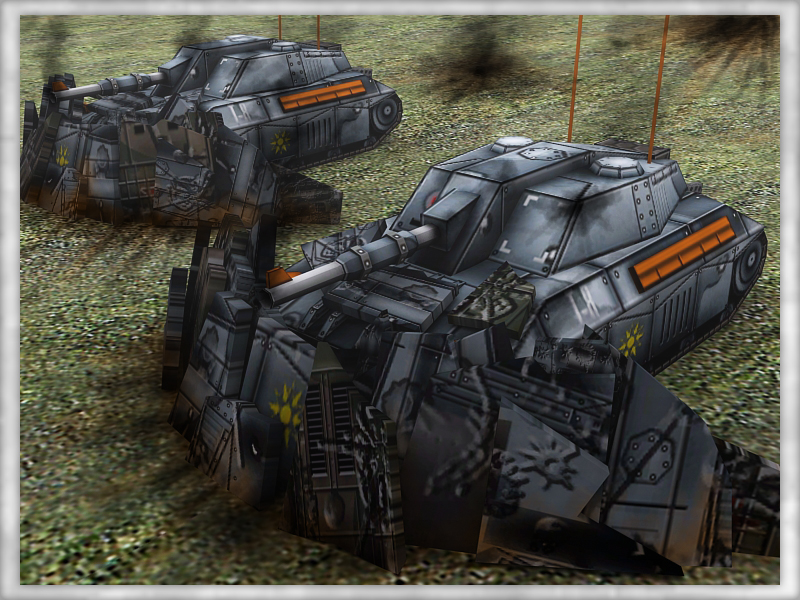 "How is everything?" RA3 Bullfrog

It's been a while, but we've finally managed to make an update! YAAY!
Well enough chat (especially after that mountain of text) let's get on with the new renders! 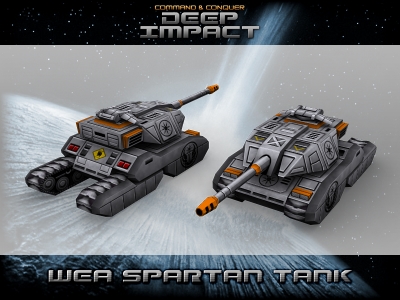 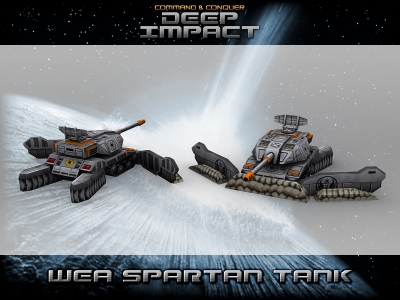 With the federalization of western Europe and the creation of the WEAA (Western European Alliance Armada), many joint projects started between different countries and companies. While each country (Now a federal district of WEA) kept its former army, it was decided that WEAA would need a fresh start with new assets adapted to their needs.

The Spartan MBT is a joint project between Germany, France Foreign Legion and the international corporation Z-Tech. Based on the idea of one very inspired Captain, The Spartan is well armored and has good speed and maneuverability. Along with these specs, if the situation needs it, the tank can be permanently deployed into a stationary gun post that can offer additional defense to infantry troops. Once deployed, it gains a reasonable boost to its range and damage and can also garrison 2 infantry troops. 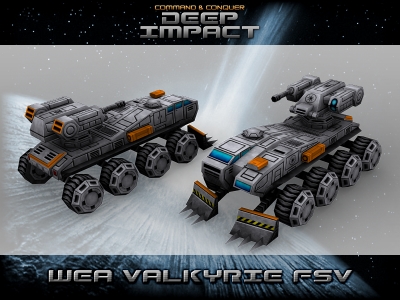 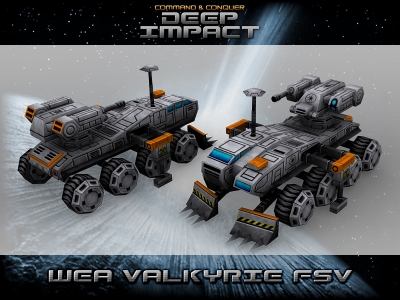 Cynopolis Corporation is the world’s leader in terms of bio-mechanical and nano-technologies. As such it was no surprise when they were contracted to produce a field support vehicle that would keep the WEA vehicles alive. Before the war started with the ADF, the European Space Agency had plans for a manned mission on Mars, and one of the products of this plan was the Valkyrie Mars Vehicle - VMV. But due to war, increased costs, and the need for more military satellites, the Mars project was canned. When Cynopolis started the development of the support vehicle, they used the VMV as their base. It’s all terrain and modular design, allowed the designers at Cynopolis to easily modify it for their needs.

Cutting-edge nano-technology was installed, along with a Firefly anti-garrison weapon (a nanite warhead that once deployed kills infantry at a very high speed) and the equipment required for disarming mines or IED’s. The result was the Valkyrie Field Support vehicle.

Last but not least, here's a map showing the different faction territories as well as the meteor impact points. 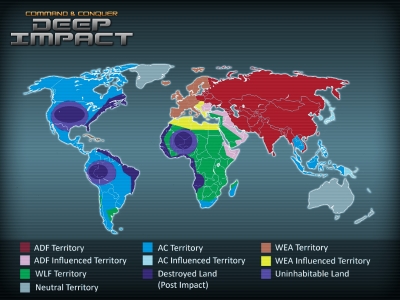 That's it for now, stay tuned for more updates in the future.

It's the cute wombat effect. Once you see their face you go peaceful for life :P

Remarkable pieces of quality art, as usual. I liked the descriptions as well.

at least the Philippines is an ally of my favorite faction...
:3...

i like how japan is alliedto the AC, even though i would like to see them have something closer to their own army, AC fits them better then ADF.
also no impact points on ADF or WEA territory? i know that WEA couldnt handle to loose any of its scarce land, but ADF is the king of territory, is there an actual reason why you didnt make them have any impact points?

Logic. We can't make the fragments spread too far from it's origin otherwise it'll look like a meteor storm rather than a split doomsday meteor.

You know, it would be cool if we could have those tanks and those improvised tank/barriers as civilian, make them map elements, the tanks abandoned unmanned vehicles, and the ones with the barriers could be garrisonable structures

oops, i forgot to log in...
You know, it would be cool if we could have those tanks and those improvised tank/barriers as civilian, make them map elements, the tanks abandoned unmanned vehicles, and the ones with the barriers could be garrisonable structures

You didn't have to repost everything again :/

About the question, we might do that in the future when we're working on the maps.