These last few days the game was improved even further and also I decided to talk about the games features.

I thought it would be nice to share some insight regarding the game and show some new additions.

So let's see how I imagine the RTS part of Hoarder.
I like games that know how to dose the quantity of information and difficulty. With Hoarder, I wanted the player to realize that the game will move at such a peace where he will be comfortable.

The first missions will be very simple. More than enough time to check the units, the spells, get comfortable with the attack and defense orders and understand the enemies. Also, this step-by-step system is also present outside the battle. There is nothing forcing the player to start the next mission. For example if the player finished mission 7 and tries mission 8 and it is too difficult, he can try doing a boss encounter, or a challenge or maybe redo the mission 7. He has full liberty.

The player is free to upgrade the tower to maximum level doing only one mission. It is hard, but nothing is stopping him. In Hoarder, the player decides the pace of the gameplay.

As I said the overall difficulty of the game increases with each mission. From the first mission where the player will encounter 4 or 6 enemies maybe, to missions fourteen or fifteen, where he will encounter hundreds of different enemies.

Another interesting aspect is the way the spells are working. For example the Hell Rift will deal decent damage in a fixed area. The more enemies in that area, the more the overall damage done, but be warned as this spell also deals damage to your minions. Maybe you have that pesky enemy that deals massive damage from behind a group of strong melee enemies so he is out of reach for your minions? No problem, use Lightning to deal considerable damage to that specific enemy.

This ends the first part of my insight into Hoarder. In the next article I will talk about minion types, boss encounters and enemy types.

I didn't forget, I promised some updates.
Well here is how a boss encounter level looks like : 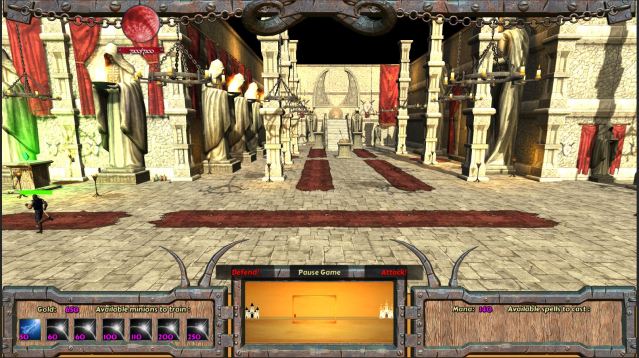 Also, I added an interesting GUI background created by my modeler. I think It looks great!
Here is the new sound slider I added, in case you need to silence the game when your girlfriend is sleeping next to you. 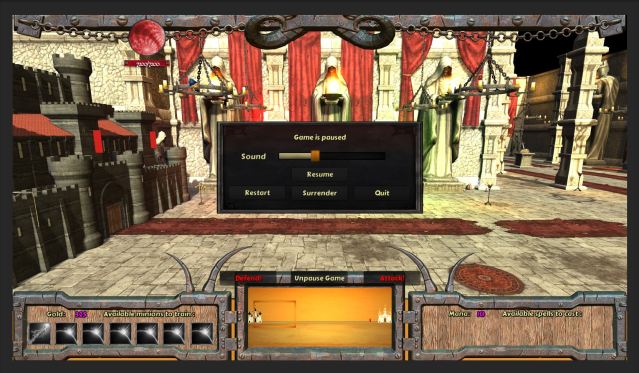 Well, that's about it guys. I will return probably on Monday with the changes and improvements added for the game this week.

Have a nice weekend !