Complexity and hardcore modding. If you want these two, you cannot miss these news about HESK: Hyugaren! 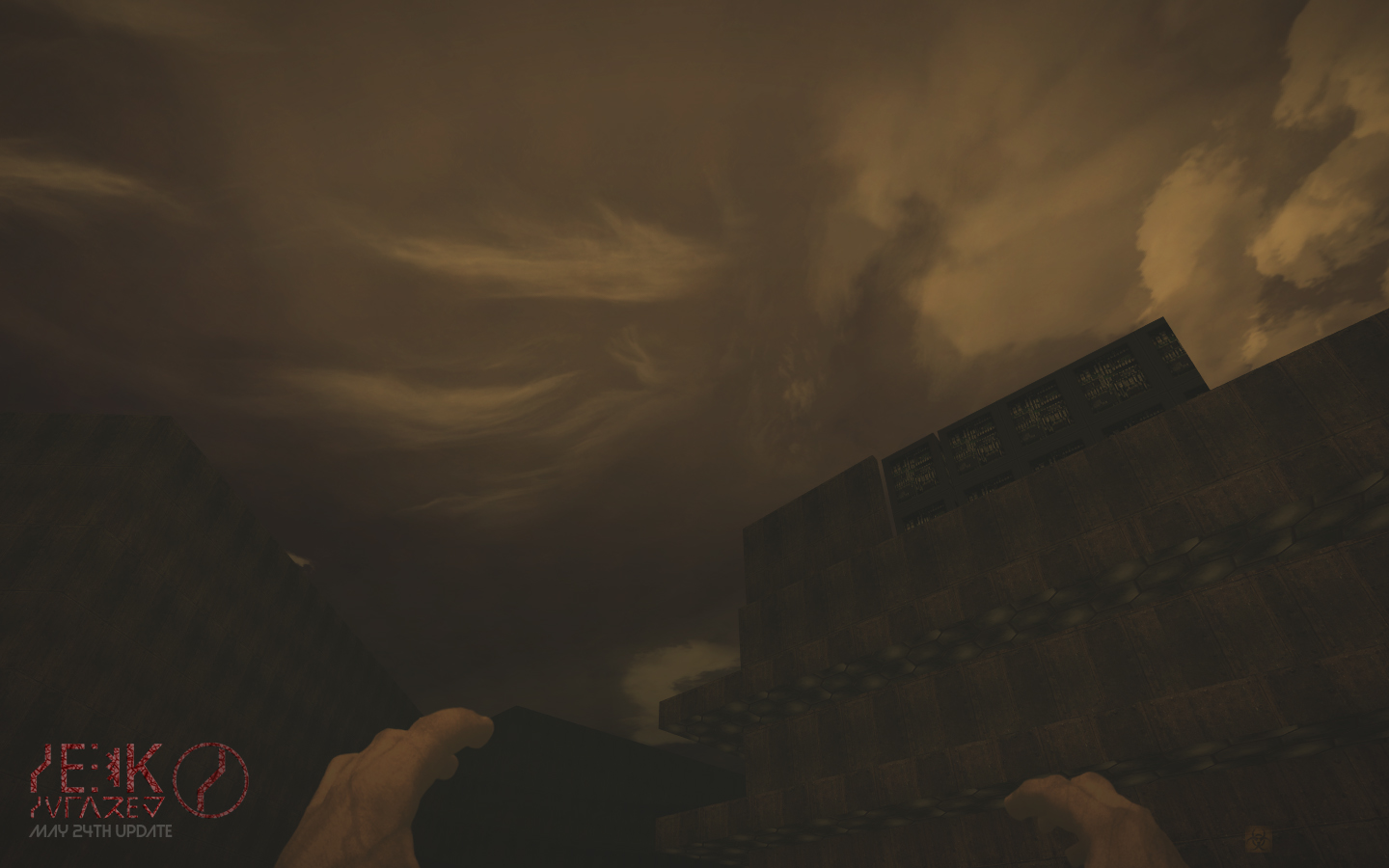 This post is meant to keep all followers here informed about the development of the mod. Originally, I wanted to show all these features in a video recording, but I realized it would be better with a post here on ModDB. A lot of changes underwent in the mod since it was migrated to GZDoom 1.8.2, so it can be hard to reveal every detail without missing something. This is also a good opportunity to mention the stages and means of development I use in HESK.

First, HyperSkybox has entered in its final version development. As you could see in a previous snapshot from April, version 1.0 it's very different from the concept applied in the ZDoom development of Hyugaren.

It is no longer a fixed image scrolling through the skybox. Now clouds are randomly generated, have unique and semi-random properties, and are affected by external factors. Every cloud (Currently, out of 3 types, 10 variations each) has mass, translucency and maleability. These properties affect the way they are draw, and the way they behave in the Skybox. 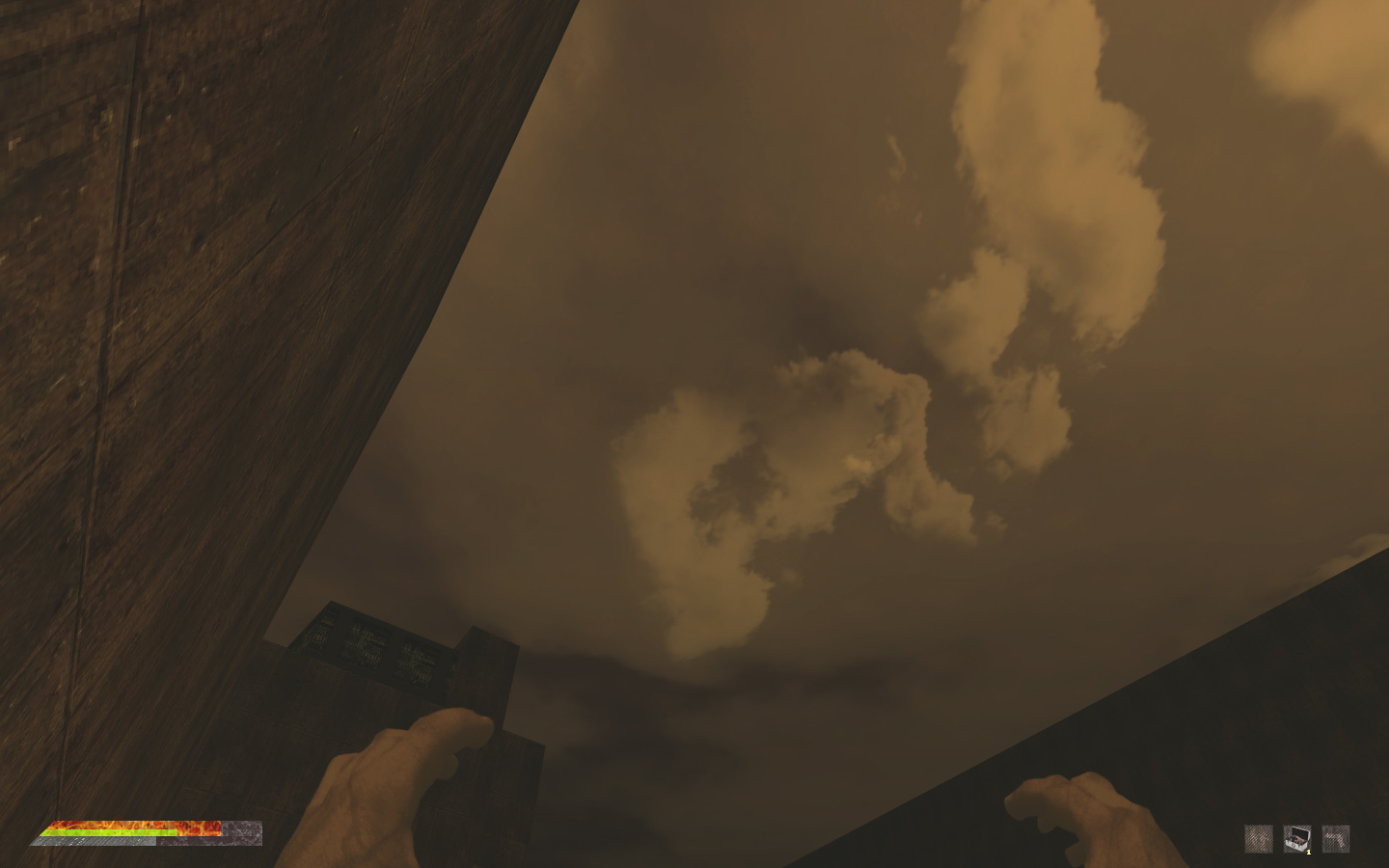 Clouds spawn in a random rotation, altitude, position and with semi-random mass and translucency (Last two properties varies, based on cloud type and appereance). Translucency is random between certain points (Generally speaking, not beyond 0.9 and not below 0.7). Mass limits, however, are defined by cloud appareance (If the cloud is big and if the cloud is a stratocomulus or, for example, a cirrus cloud). In addition to their random spawning properties, they will rotate, morph, appear and disappear randomly through their lifetime. 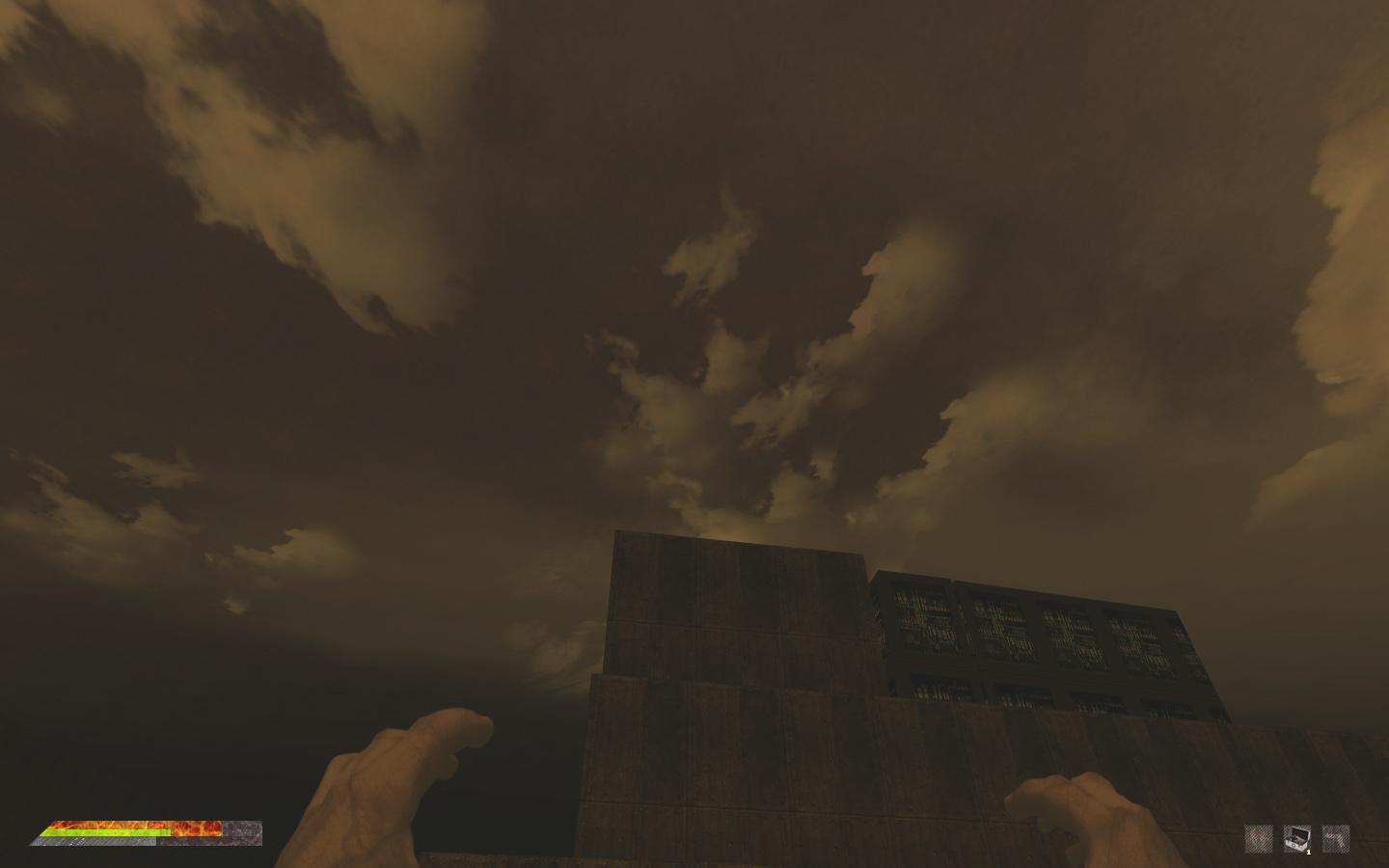 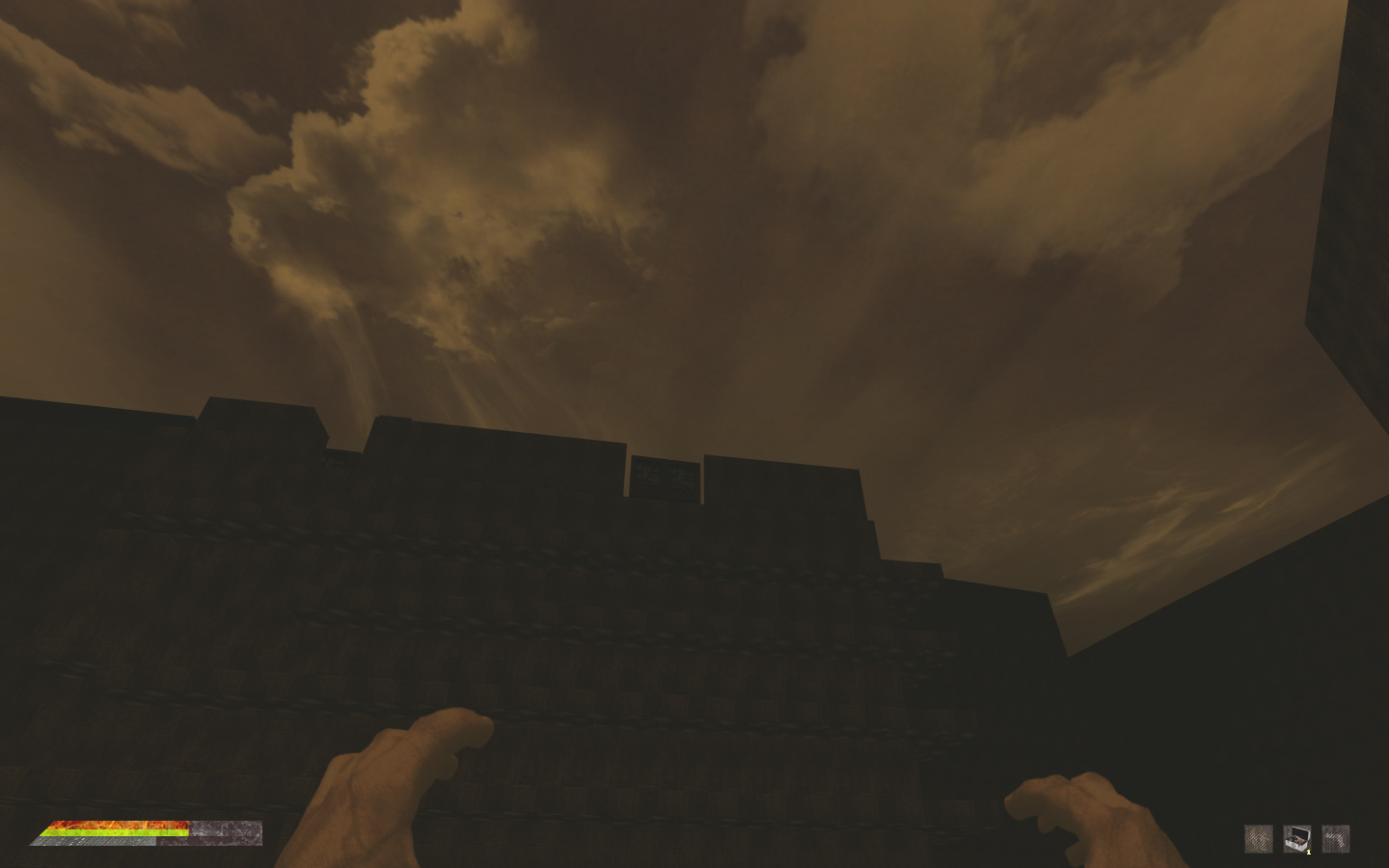 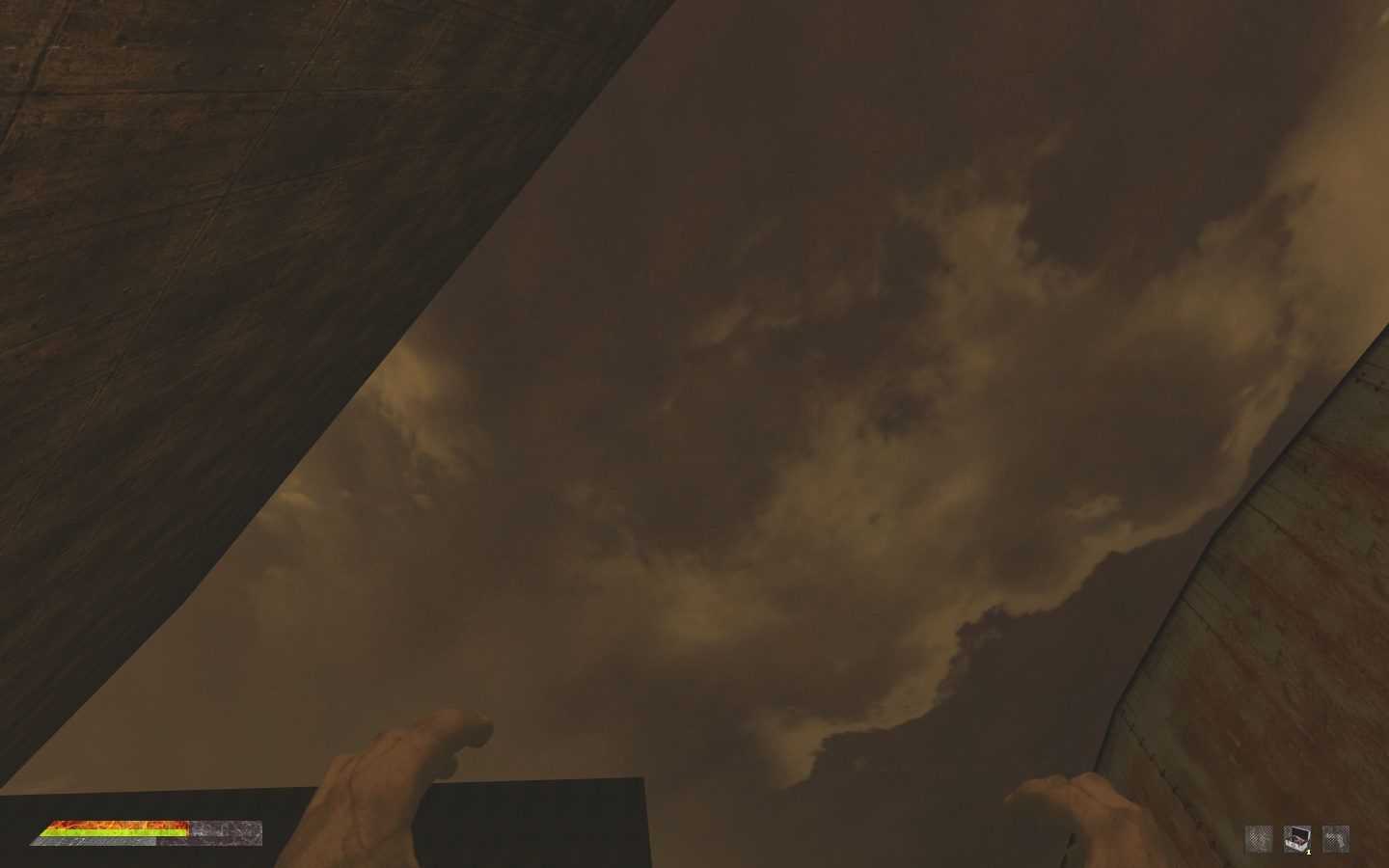 Naturally, as in real life, clouds needs a certain amount of wind in order to move. So, wind is a factor in HyperSkybox, which will have also a semi-random strength and direction, and will change over time.

All these properties creates an unique skybox for every occasion, and gives the player much more immersion in the mod.

There are some comparatives of the same scenery, at different times: 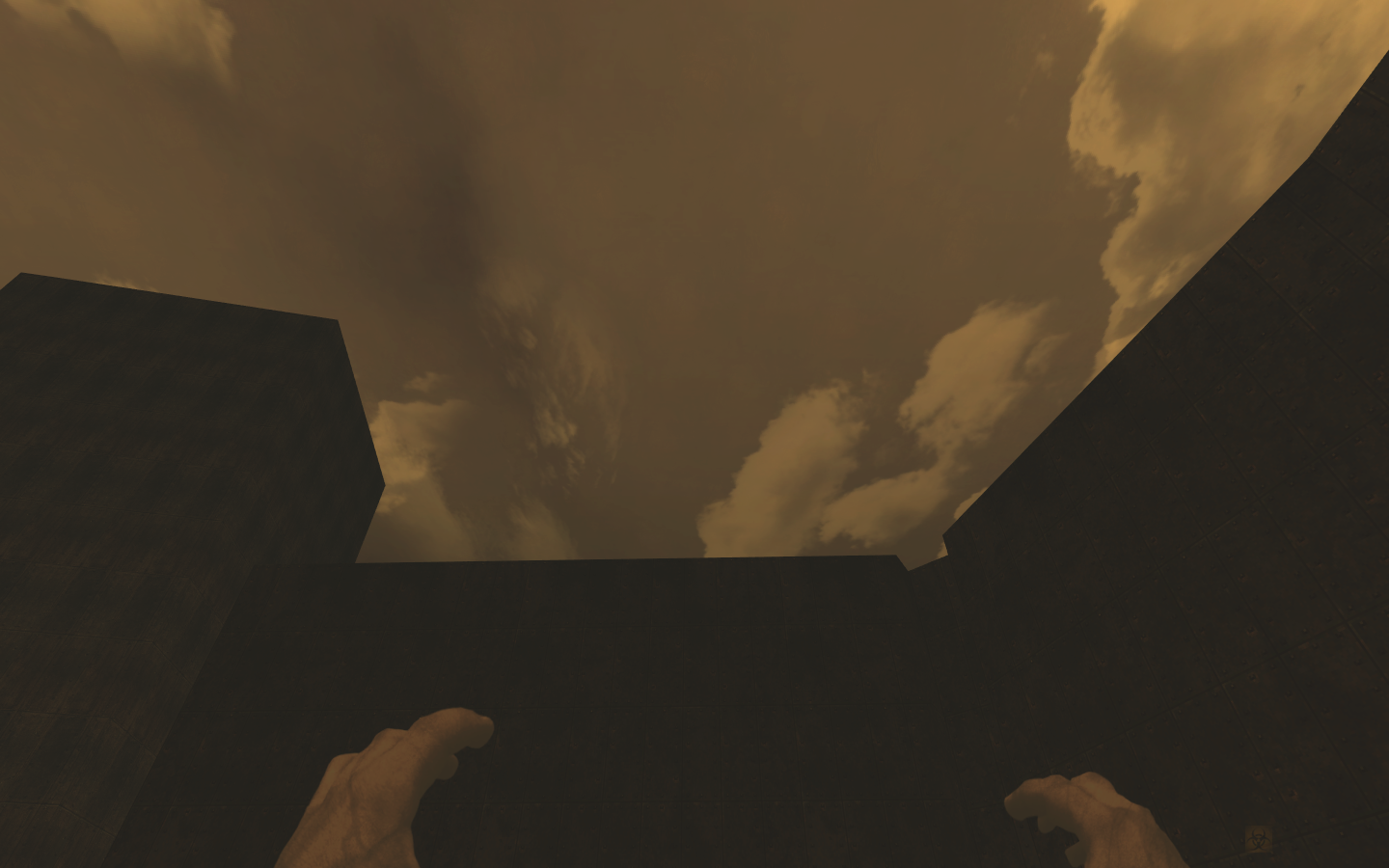 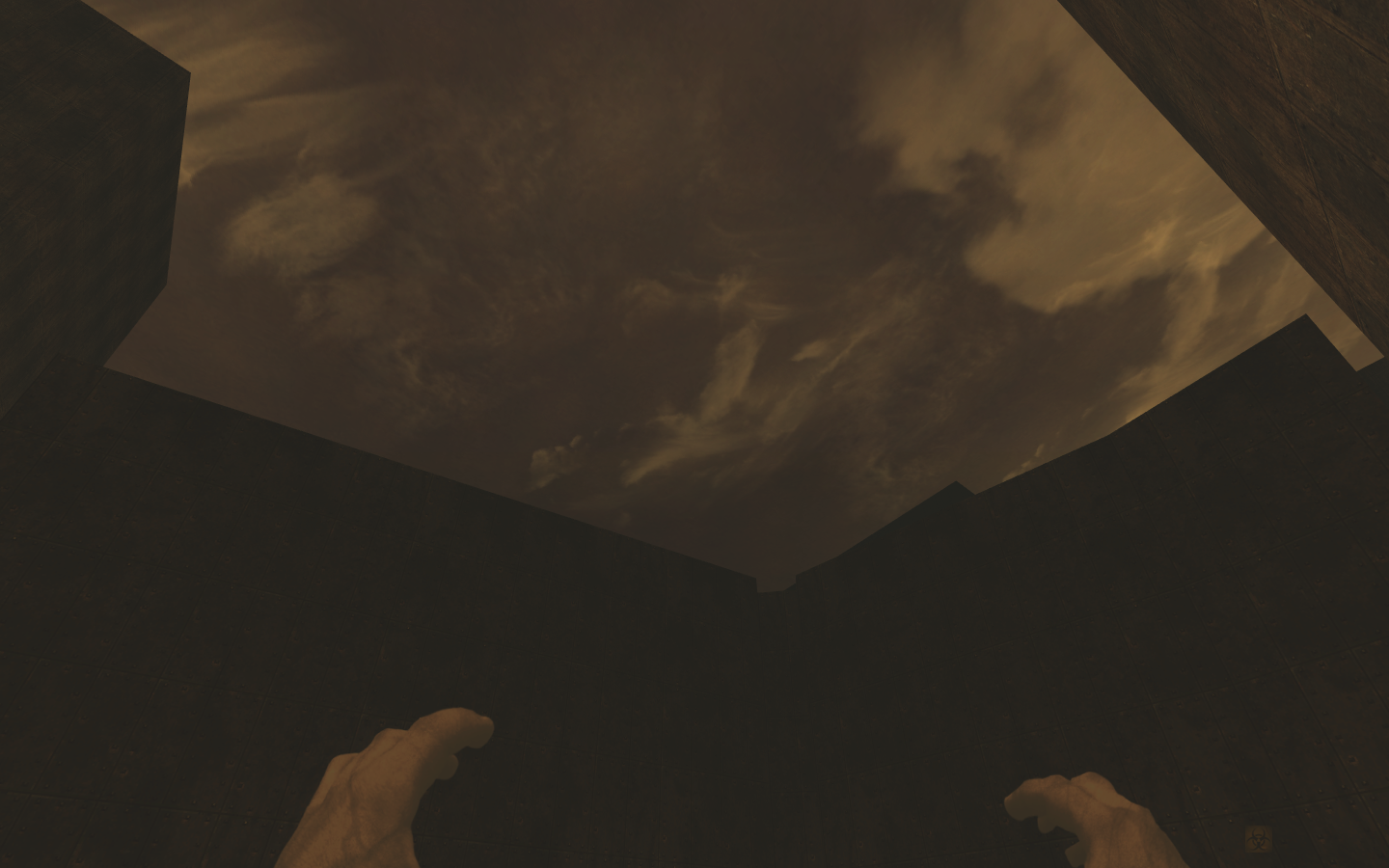 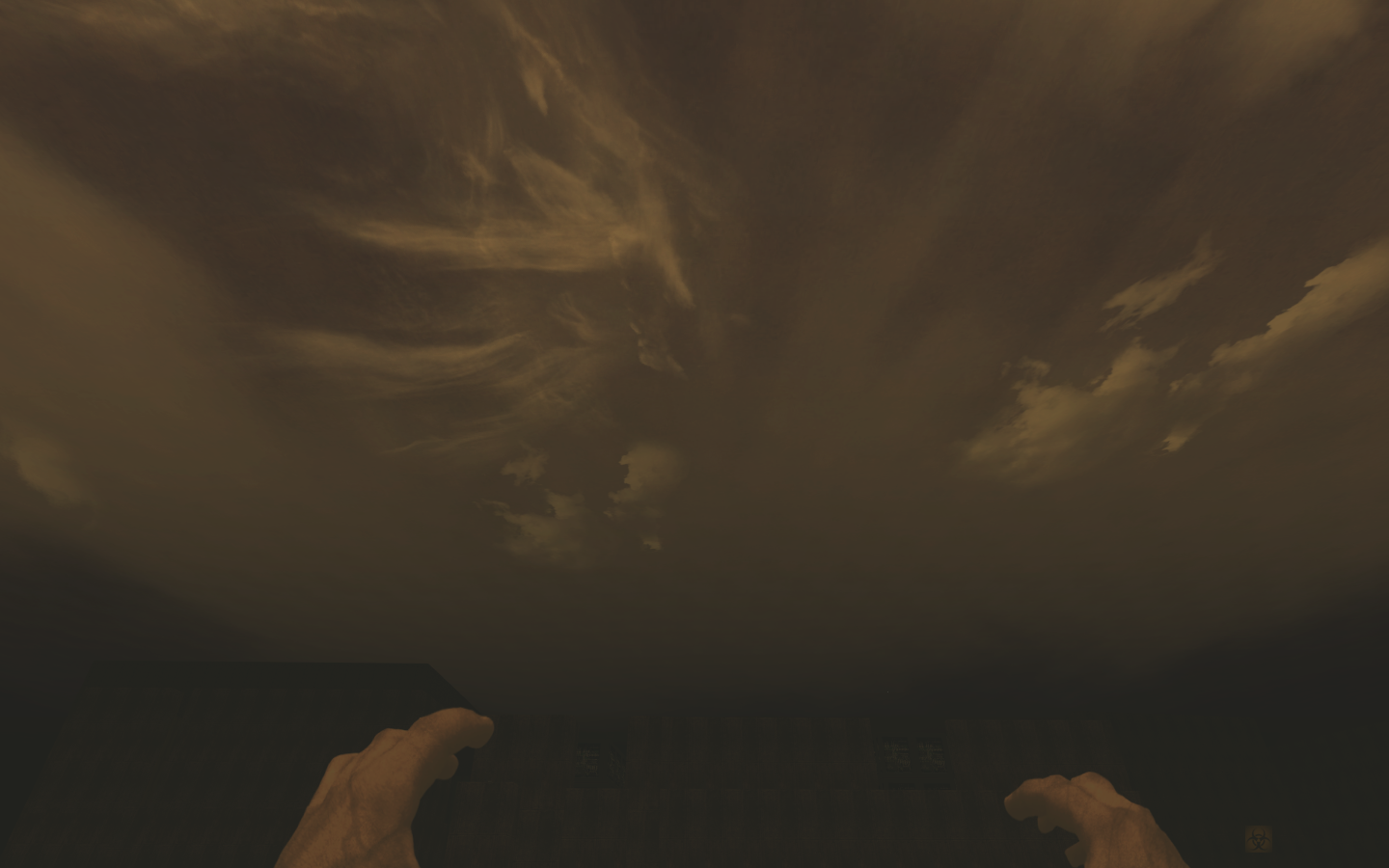 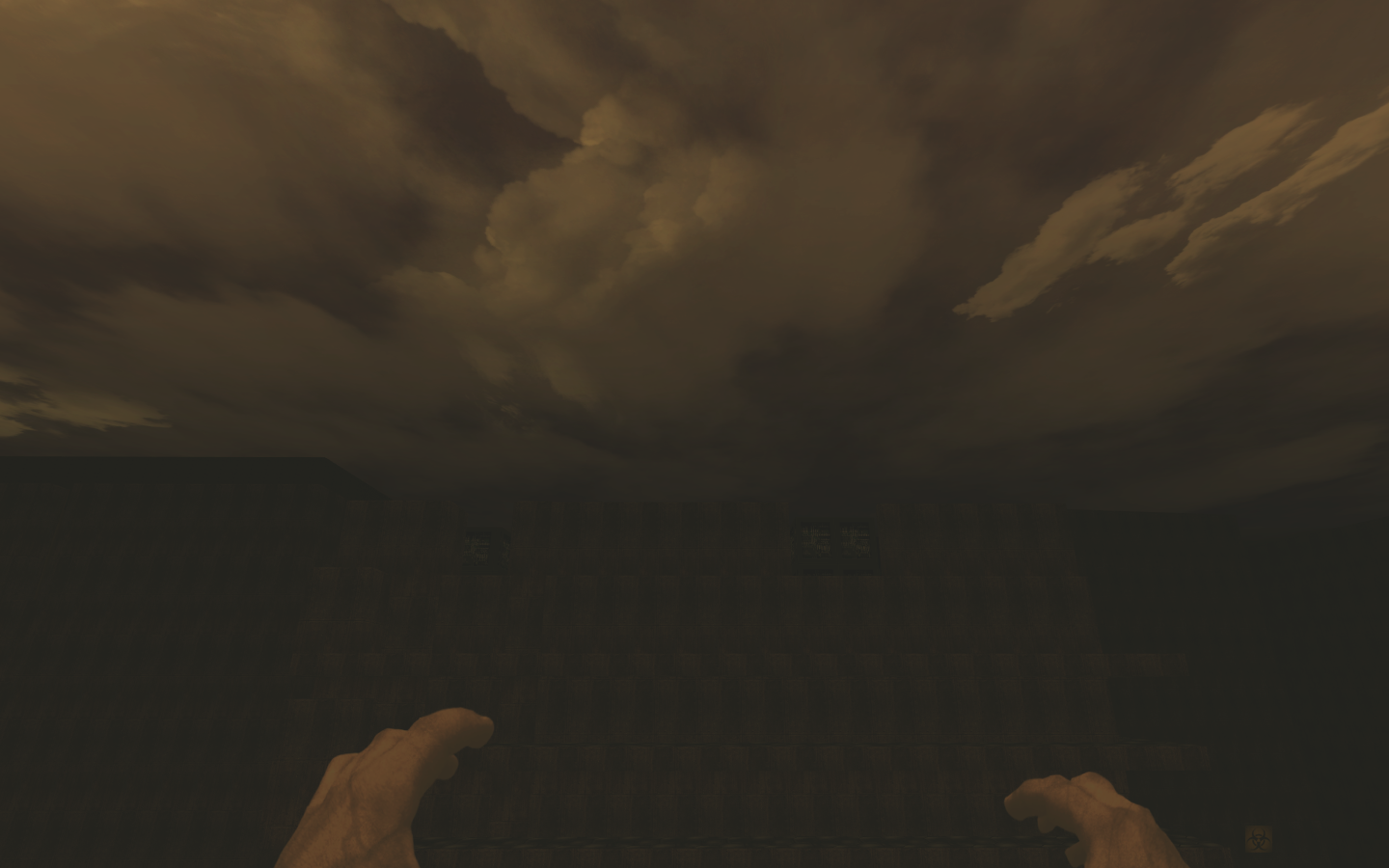 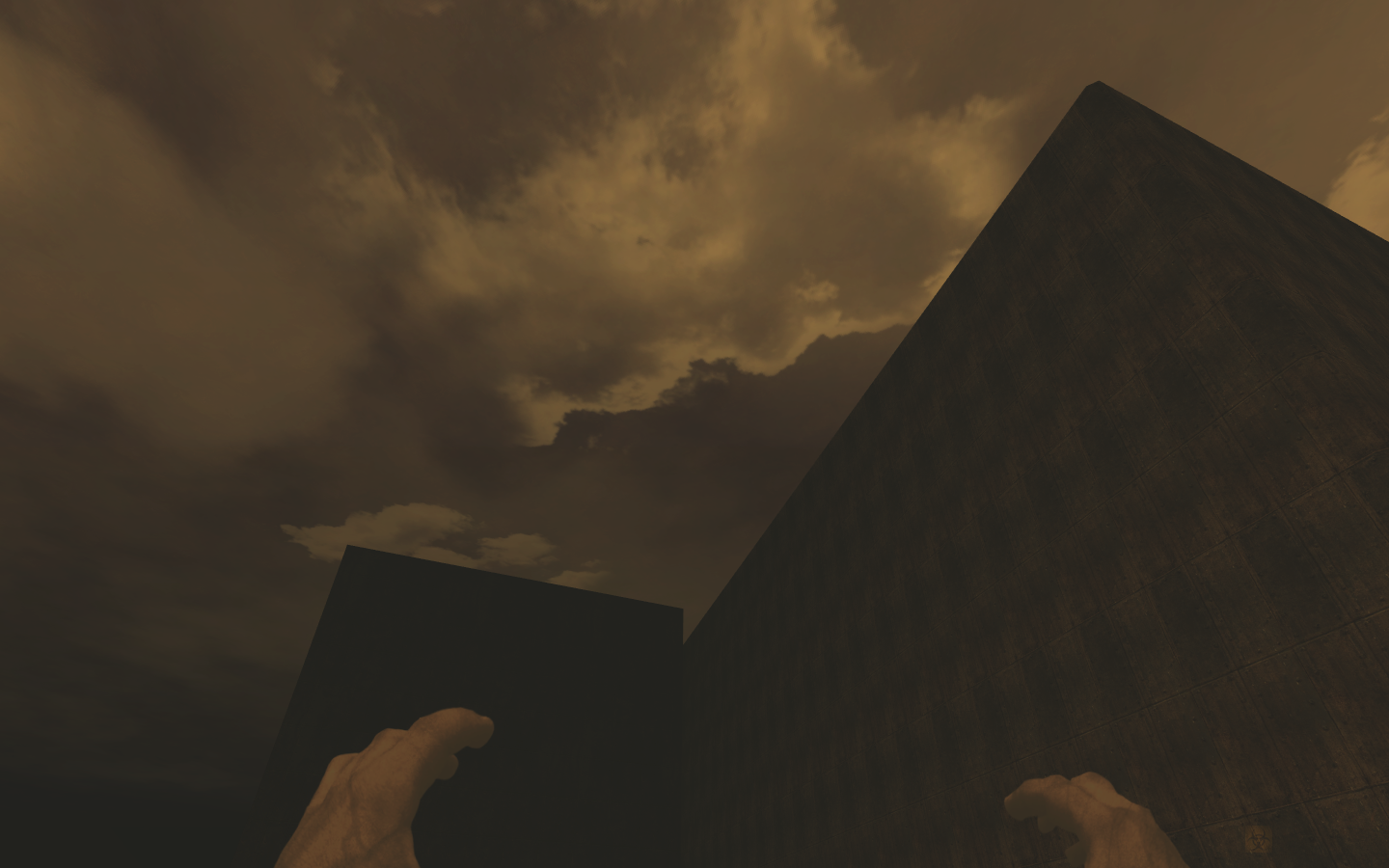 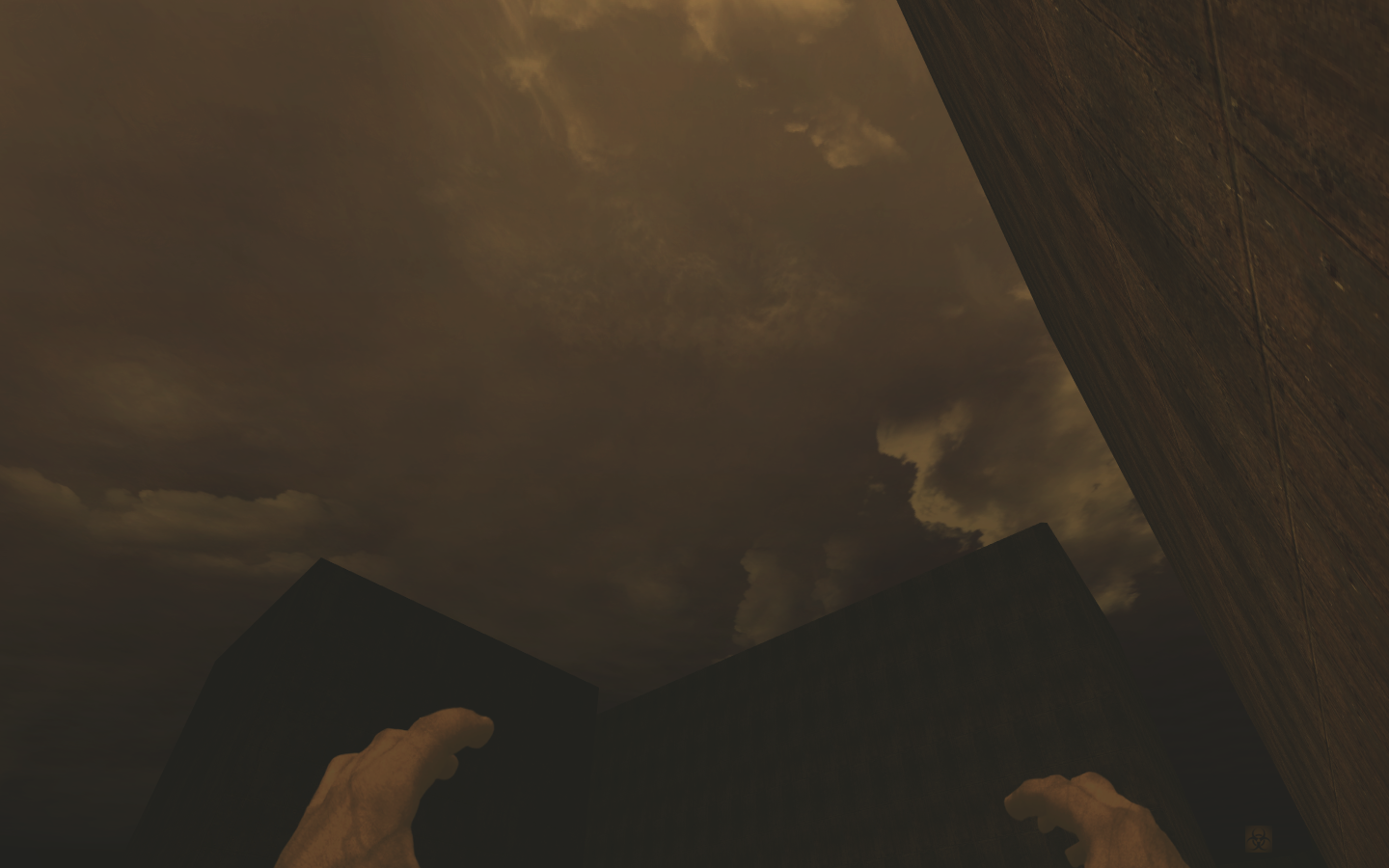 HyperSkybox can be adjusted: Cloud density and shaders enabler/disabler. This will give you some control, if you witness your performance being affected.

Another change, as you can see in the screenshots, is the HUD. Reworked, the hud will adapt itself to the new minimum resolution of GZDoom of 640x480, thus having much more presence and detail. Shaders are used to give a nice effect in the health bar. Also, immunity bar will vary its colour, based on the prescence of a disease. Nevertheless, only health, immunity and armor hud are currently developed. Further rework will continue, first with inventory HUD, then expanding into a new UI system.

Also, bobbing is now included. It synchronizes with footsteps sounds, and can be adjusted in HESK Options menu, changing its intensity, or disabling it at all. It will require further refinement, but the main idea is implemented and working.

In this short video, in addition of the new headbobbing and its flexibility, I'll show the new (Basic) colouring of the sceneries, HyperSkybox in "action", new sounds directives for immersion (Only reverbs, for the moment) and the new HUD (With Health Bar's fancy effect):

Shaders are also in further development. After some time of experiments, I managed to get Film Grain working. It can be disabled too. This can be made not only out of likeness, but also if your performance gets affected. 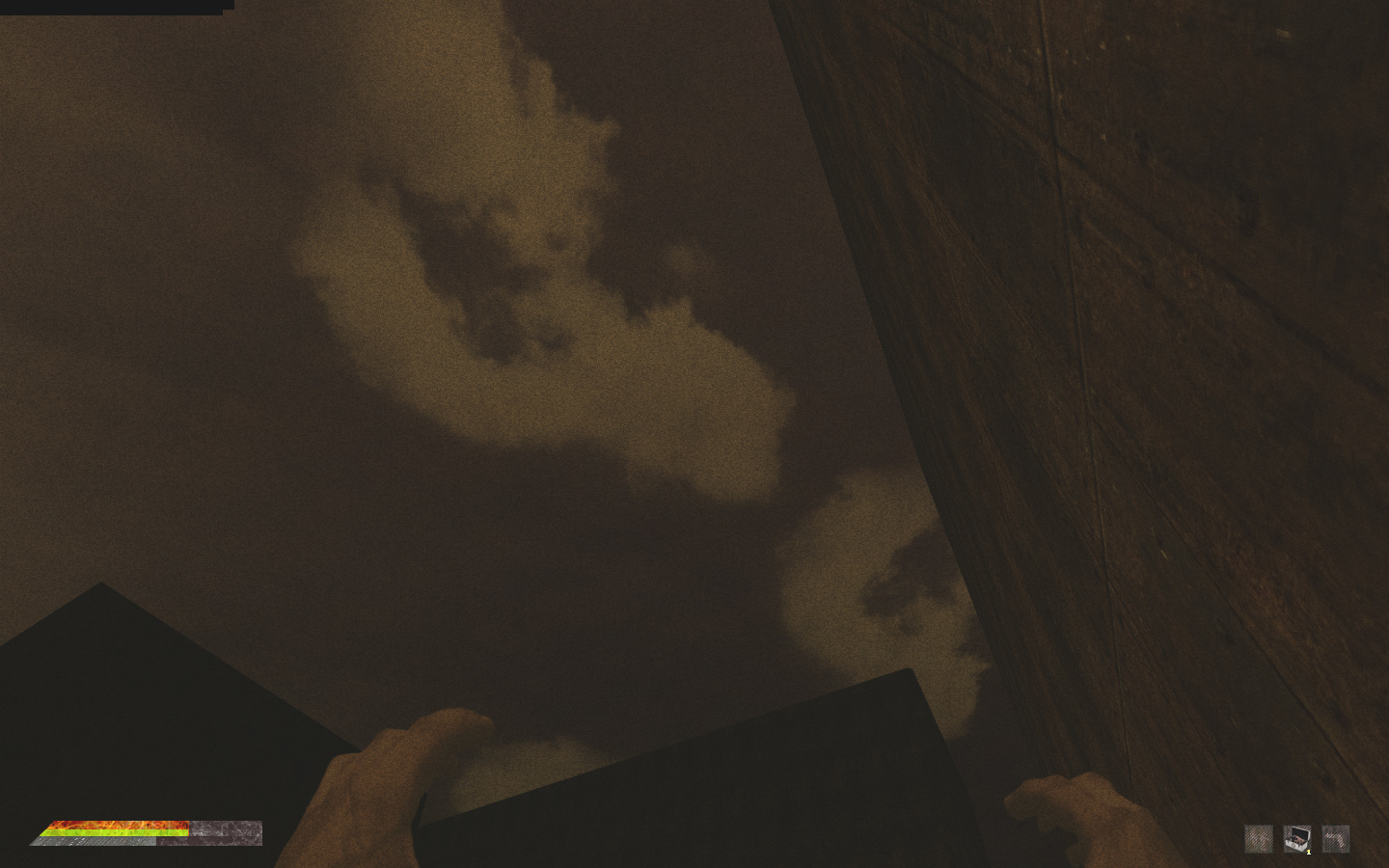 (This is a very raw demo. It needs a lot of adjusting, but is meant to show the main functionality of the GLSL code).

A new feature is also bullet chips in the floor and ceiling. At the moment, only mechanics has been developed, so I won't be able to show screenshots. You could customize your settings in this feature too, adjusting maximum decal amount, and maximum decal time. I'm also thinking about a ricochet system, but that's just a concept right now.

Main health system has been also reworked: There are things to take into consideration, like hunger, hydration, stamina, adrenalin and further technical data, like amounts of dopamine and ketamine in your system. This can seems to be a little excesive and complicated, but it's really simple once you start playing the mod, as most of these data are for background use and doesn't need to be taking into account by the player (Aside for keeping himself with a good health, eating and drinking well, not abusing drugs, checking his immunity and health, etc).

Also, further background complexity will be added to actions, to improve immersion. Things like taking a pill or injecting some medicine will affect you. For example, if you need to take a pill, logically you'll need to remove temporarly your helmet. So, when you do so, a fair amount of toxicity will enter in your system. In the other side, if you inject yourself an antidote, you'll not expose your body to toxic air, but you'll scratch a little bit your armor. Little things like that, which aren't too impressive, but makes some difference.

There are also variable menu music, inspired by mods like Misery and Autumn Aurora (For S.T.A.L.K.E.R.). Hardcore difficulty and complex mechanics were also inspired by said mods.

In another chapter, I want to make you part of the development, keeping you informed on how it works. As being a lone developer here, it's very difficult to make room for a project of this magnitude, therefore a solid work structure is mandatory. There are six stages of development I use, and through them you will be able to understand and comprehend some of the effort that's being put into this project.

Now, for the closing lines, I want to make a nice announcement.

We already have some external collaborators for the mod. As this mod gathered followers, people offered their talent to the development. I'm not disclosing yet their names or their work, but I'm telling you they're artists, and are collaborating with great pieces of art. This is a great advance towards a more solid release, because these are very talented people (Some already professionals working for the VG industry).

So, even after many months of silence, you can rest peacefully now: HESK Hyugaren is still alive, expanding and getting stronger everyday. It release may look unreachable, the same with news about the development. But they say good things takes times. And I agree.

i still dont get what its supoused to be, but it looks terrific

Hi Brunocar! Do you mean what's supposed to be the mod itself, or the changes mentioned in the news post?