Blood is the most loyal companion to our main hero Jinx and one of the three party members in Jinx: Womb of Cosmos. Despite his wild and brutal demeanor, he is a total softy, who has a crush on Colleen, another heroine. His teeth, nails and harness are called Tools of Trade collectively. 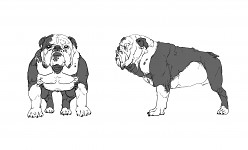 Blood is everything you would expect from a bulldog. He snores like a legion of completely exhausted men, spits like there is no tomorrow and he tends to be rather loud in all his daily expressions. Make no mistake though, this beast of a companion is also a poet, a romantic soul and an activist against the mistreatment of his race by the two-legged tyrants.

This kind hearted brute is the epitome of physical strength and belongs to the caste of berserkers (with a bulldog-ish flavor). His talent trees are Savage Claws which includes paw attacks and combo builders, Savage Maw that consists of powerful combo finishers and teeth, Bodybuilding which is an assortment of self buffs and steroids and lastly,Underhanded Tricks cause let's face it...he is a dog. 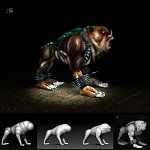 His role in the party is that of the melee physical DPS combatant. At least when he is not reciting one of his poems to Colleen or arguing with Ghrelin (the butler of Castle Sin) about the necessity of staying vegetarian at all costs! His signature ability is called Pump Up. By invoking his inner Macho power and by tapping into his limitless reserves of testosterone, Blood gets angry and stores this new found rage for later use... This interesting mechanic let's him use an extra attack during his next turn by forming devastating combos and obliterating his enemies. Needless to say that the more consecutive times he pumps up, the more attacks he can merge into a combo. Combos have a higher critical chance than normal skills and add various effects on both enemies and allies.

That's all fellows! We really hope you enjoyed our showcase. Pretty soon we will create a similar presentation for our protagonist, Jinx the elementalist, for you. Till then, keep gaming.