This week we introduce Nephele, the theomechanist. As a temple priestess for Apollo, Nephele's in charge of maintaining the steam contraptions that draw people to the mystical temple of Apollo. She also uses her talents to use powerful steam gadgets in battle!

Prior to her adventuring career, Nephele was a temple priestess at a small temple of Apollo outside Athens. In addition to helping out with religious rites, Nephele's also in charge of keeping all of the temple machinery in tip-top shape. That is, when she's not tinkering on her own steam-powered gadgets. 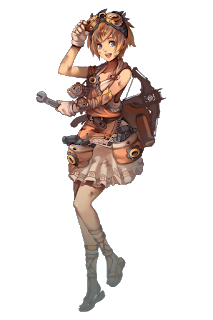 In combat, Nephele sports a mini-pressurized boiler and her trusty steam bow:

Her steam bow can deal incredibly high single-target damage, especially when using her stored up steam pressure to hop up to high vantage points:

In addition to these basic abilities, Nephele builds up one unit of steam pressure each turn to power her unlockable skills. The first skill you'll get to use is called Depressurize. It uses up all of her pressure to push all adjacent characters up to 5 spaces:

Unless said characters hit a wall or fall off a cliff, that is. ;)

Nephele is one of the major damage dealers in your party, but sometimes you have to be clever to make the most of her talents.

For example, here's her skill Sky Shot. When used, Nephele will fire a volley of arrows up into the air that will do a ton of damage upon landing. So what's the catch?

The arrows won't hit their targets until the end of the player's next turn! So, you need to plan ahead and target an area you think enemies will be standing in the future. Of course, you can also make use of any repositioning skills your other party members have to setup the shot.

The other skill I wanted to reveal is called Power Shot. Most of Nephele's abilities deal Physical damage, which means any enemies with the Heavy defense type will take reduced damage. Power Shot deals piercing damage that ignores this penalty, and it also hits all enemies in a line.

If you're able to shove some enemies around, this line shot can be super effective.

Each of these skills costs some steam pressure to use, so tracking that resource is central to utilizing Nephele effectively.

We're launching Hellenica in less than two weeks so check out the trailer, wishlist us on Steam, and spread the word on Twitter!