Post news RSS Having fun with the new update

Finally, the new update is out, and the new playtesters are invited. And this blogpost I describe how playtesting is going.

Hi everyone! Finally, the new update is out, and the new playtesters are invited. Forty of them, to be precise, and 25 of them already responded, so there's a lot of playing going on at the moment. If you already were a tester, and are looking for new friends, this should be a good moment to log in again ;). For all testers: these two things are new, let me know what you think of them!

I have to say I forgot how nice it is when new players play te game; I love finding houses on testservers, messages from players saying nice things, getting new likes on Facebook, people inviting their friends, etc. And of course, I play a lot myself as well, so there's a serious chance you'll meet me! Probably while I'm fishing; I'm really starting to enjoy fishing on public servers, so I can say to myself: 'this fish was generated in Sweden' or something like that ;). If you ever catch a cool looking fish, let me know here or via social media; I'd love to see them!

The fish generator was quite hard to get right, by the way, in particular AFTER I already thought the update was ready to be sent to Desura: it turned out that the .exe I made out of my code handles the file saving differently, which forced me to rewrite a lot of code. And then, when I tested the new .exe, I discovered I broke the fishing mechanic while fixing the generator, so I even had to make another .exe. And when I finally could upload everything (this already took me a whole morning), it turned out that most of the volunteers were very busy, so I had to wait a little longer. Not that I blame them or anything - they're doing great work and I can't overstate how much I appreciate it - but they are doing this in their spare time, which means they mostly can't warrant 24/7 uptime. It would be great to have a professional company volunteering (would be great publicity, right?) - maybe I'll try to find one in the future!

Finally, I also have a huge lists of bugs to fix already, so more than enough work to do! The most interesting one is probably this one: what happens when a lake and rocks are generated on the same place? Testserver1 gives the answer: 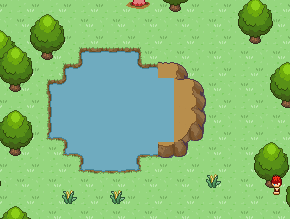 PS
If you didn't get an invite yet, don't worry; more groups will be invited soon!

Have some patience :). You submitted your email address, right?

Then I shouldn't take long :)