In this update, we are keeping study the science behind the Daedalus, the explicit part that makes the whole After Reset universe so special. In this update I’d like to invite you to the topic of micro-gravity, artificial gravity the terms of spacecraft and c-Rings of the DSS.

In this update, we are keeping study the science behind the Daedalus, the explicit part that makes the whole After Reset universe so special. In one of the previous updates we already took a look at our “Way to Venus” and the “Daedalus Space Station (DSS)”.

And now I’d like to invite you to the topic of micro-gravity, artificial gravity the terms of spacecraft and c-Rings of the DSS. Once again, my studies began on NASA’s Reddit several month ago...

In popular media, in soft sci-fi movies and games, as well as in our childhood, zero gravity looks sweet, cool and fun, making us dream like we fly serenely and relax. Though, the fact is that human body does not fit for zero/micro gravity. To be more precise, microgravity degrades human body. 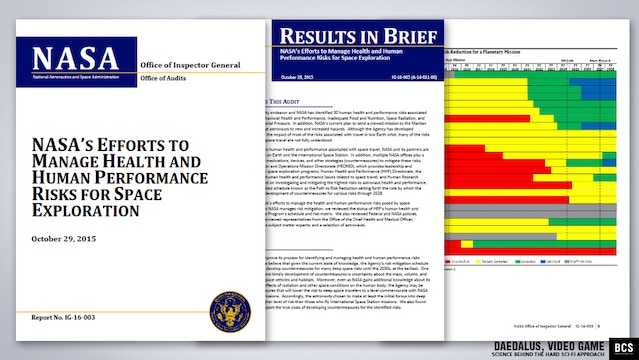 According the NASA Office of Inspector General Report from October 2015, one of the major obstacles for the long-term stay/travelling in space is zero gravity (or weightlessness) which cause following serious deleterious effects on human health: 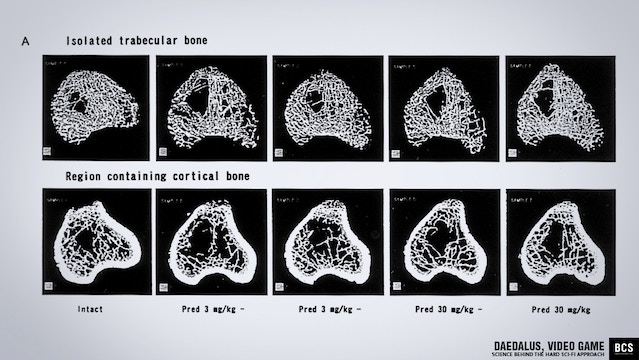 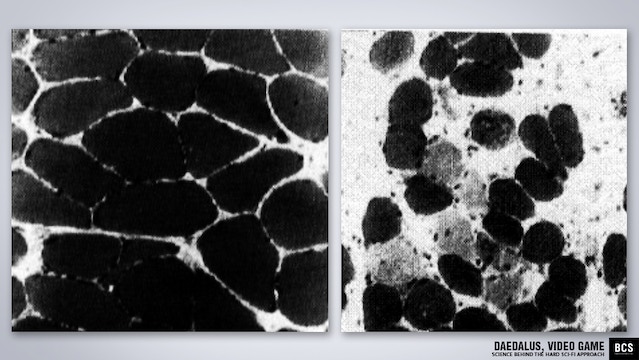 2. Loss of Muscle Mass – another critical negative effect involves the loss of muscle mass. Without the effects of gravity, skeletal muscle is no longer required to maintain posture and the muscle groups used in moving around in a weightless environment differ from those required in terrestrial locomotion. The muscles start to weaken and eventually get smaller. Consequently, some muscles atrophy rapidly, and without regular exercise astronauts can lose up to 20% of their muscle mass in just 5 to 11 days. The types of muscle fiber prominent in muscles also change. Slow twitch endurance fibers used to maintain posture are replaced by fast twitch rapidly contracting fibers that are insufficient for any heavy toil. Despite nowadays each astronaut spends at least two hours per day exercising on the equipment, various treadmills (like COLBERT), the aREDs (advanced Resistive Exercise Device), stationary bicycles can only slow down the process. The only achievable future solution is artificial gravity. 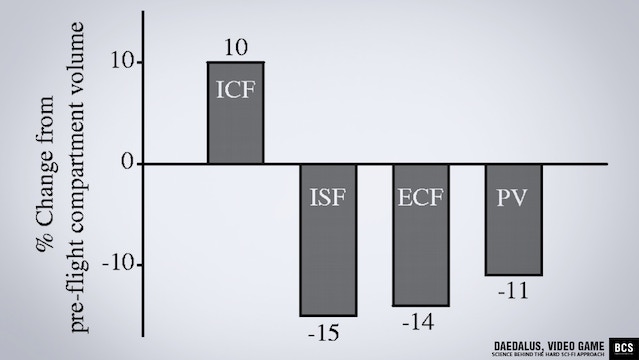 3. Fluid Redistribution – in space the autonomic reactions of the body to maintain blood pressure are not required and fluid is distributed more widely around the whole body. This results in a decrease in plasma volume of around 22%. Because it has less blood to pump, the heart will atrophy. A weakened heart results in low blood pressure and can produce a problem with "orthostatic tolerance," or the body’s ability to send enough oxygen to the brain without the astronaut's fainting or becoming dizzy. Upon return to earth, the blood begins to pool in the lower extremities again, resulting in orthostatic hypotension. Because weightlessness increases the amount of fluid in the upper part of the body, astronauts experience increased intracranial pressure. Beyond that, due to increases pressure on the backs of the eyeballs, it affects their shape and slightly crushing the optic nerve. No cure exists; the only achievable future solution is artificial gravity. 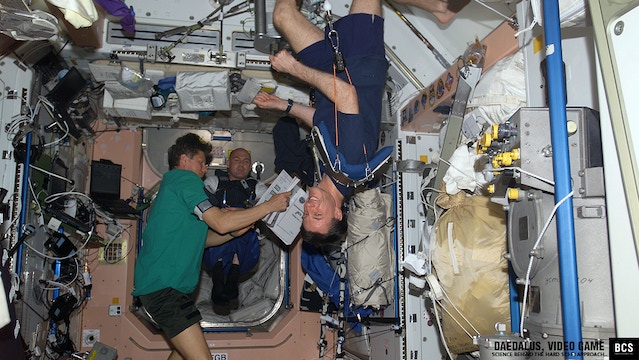 4. Motion Sickness (or Space Adaptation Syndrome) – not very pleasant but for up to 52h human brain adapts. Caused by the conflict between what the body expects and what the body actually perceives. Can be easily surprised by transdermal dimenhydrinate anti-nausea patches (which are usually used nowadays whenever space suits are worn because vomiting into a space suit could be fatal).

Okay, based on the Nautilus-X drafts let’s imagine such centrifuge ("c-Gravity Ring" or "c-Ring", as it is called on the DSS). Artificial gravity, here is a result of the use of particularly centripetal force. The only (but decent) issue to make such structure nowadays is the size (hence, the cost) of the spacecraft required to produce centripetal acceleration. 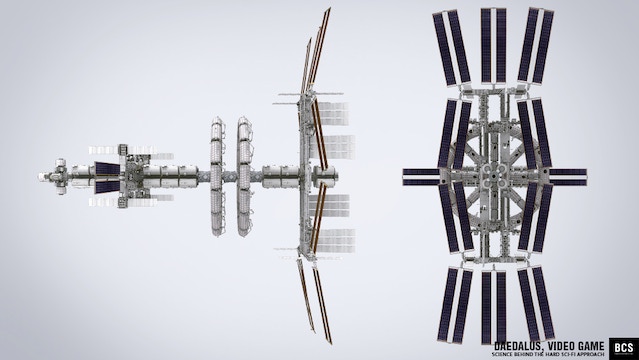 But we’re speaking about realistic 2100+ AD with all resources of NASA, ESA, Roskosmos, CNSA, ISRO, JAXA, CSA, UKSA, CSAE, CSIRO and ISA combined... So that is what it turned out to be:

1. Dimensions of the Nodes: I shared in one of the previous updates the first schemes of the Universal Spacecraft Pressurized Nodes (USPN) such c-Gravity Ring might be constructed from. I marks them as “colored Nodes”): Blue Node (with 3 gateways), Red Node (with 2 gateways and one “window”), Black Node (with 2 gateways). As they are almost cylindrical, each USPN is: Length: 16m; Height: 10m; Width 3m. With Pressurized Height: 12m; Pressurized Radius: 2m. Hence, its Pressurized Volume: V = π(r^2)h = 3.14412 = 150m3.

Based on the c-Gravity concept for the DSS I also encountered two important points of interest to bear in mind that follows the concept: gyroscope axis stabilization and Coriolis force. 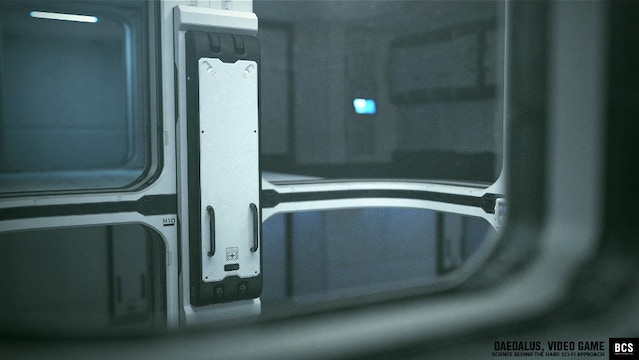 Though, aside from Gravity-Gradient Dtabilization to make the DSS to always point the planet, we also need to stabilize the axis of the DSS so that it doesn’t rotate with the c-G Ring. So despite each of the ring has flywheel stabilizers like on Nautilus-X by default DSS’s c-Gravity Rings function as coaxial rotors on helicopters (like Ka-50) compensating rotation of each other.

2. Coriolis force. We should keep in mind, that this isn't really gravity we create. Once we're no longer touching a surface, there's no force on us at all, and we'll travel in a straight line while the ground moves under us. If you were to jump straight up, you'd be adding your jump speed to your spin-related speed and fly off at an angle. Odds are pretty good that you'd end up drifting spinward, since you'd be "cutting the corner" as well as traveling faster overall than the ground (ground speed plus your jump speed will be greater than the ground speed), and you'll hit with a speed spinward with respect to the ground. Jump up, come down sideways. This is a frame effect, just one of many.

That is the time to point on c-Gravity ring’s huge radius and rotation speed that preserves astronauts form critical effects of such king during the mission. The case is that the most of Coriolis problems can be minimized by having everything at a constant radius (large open space down the middle of the ring) and spinning quickly enough that you're not going to catch up to the spin rate. E.g. for an inner surface of 10 meters radius, a station spinning once every five or six seconds will simulate a comfortable fake gravity, and you'd have to sprint before you'd start noticing changes in your effective weight.

I hope you've liked that peace of space science and our hard sci-fi approach, mates. I’d be glad to keep it and advance during the development with the help of science consultants which are quite common among After Reset fans.

In previous update I wrote that current Kickstarter brought new acquaintances and more cool intelligent people around. So in the next update I am going to introduce another such person I’m glad to see among our current and long time backers - Sebastian Tivig. He’s an aerospace engineer and was so kind to offer his experience and expert view as one of the science consultant (aerospace engineering) for the Daedalus. He gave me already a plethora information to ponder about so that I need to consider it. Frankly, still digesting tat data because it might extend/affect the gameplay and our story.

Albeit, Sebastian, please, feel free to copy/past here in comments your thoughts about the current subject in hand, in case other guys feel like to add something more or just to discuss.

Thanks for your support, cheering and Likes, guys!