Details about the upgrades made to the Halo faction...

Hey
Its been a little while since my last news, ive been busy with the clean up after my mates places were flooded...
Anywah ive also been working on the Halo faction.
From reworking most of the VFX
part 1


And ive made some changes to the scales, and what not, the new list is.... 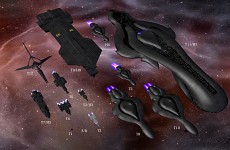 
So thats the rework, its a list of al lthe units, with a bit of an explination, all unsc ships will use MAC and side mounted cannons with the exception of the Aspire and MEdical frigate, theyll use missiles as there secondary weapon. The Covenant ships will use the pink/purple bolts (secondary) and blue plasma blasts (primary) as there main effects.
Im going to be using Halo LEgends for the SFX for the weapons, and possibly one or two of the cut scenes from halo 3 and reach if needed.

Also im looking for a few coders so if anyone wants to help, then PM with a list of what uve workedo n, if its nothing, and u still think u can help then PM me anyway
If uve PMd me before and i havn't got back to u, just send it again lol, im backlogged a bit

Well i don't know ANYTHING about Halo ships, but i will say they look cool and can't wait for the nxt version to come out!

you spelled 'Phoenix' wrong.... just thought id point that out

just go to deviant art or sci-fi models and request a halcyon model.

theyre close enough in my book, ive looked over them both externally and 90% of it is the same, so i dont see the point, and i am a hardcore halo fan...

hmm i sense greatness in this mod :P

Have u thought about what soundtracks you are going to use for the halo fraction?