In which murals are made or polished; examination objects and logic are put in place for said murals, and for a piece of graffiti; text is written for those examinations and the conclusions drawn from them; a minor footstep-sound issue is fixed; breakable pots gain placement sounds; the actions of a set of guardians are given likely-final timings; and response is begun to the possibility of no publication being gained.

This week's screenshot shows a new image of a mural; others are scattered through the body of the post! 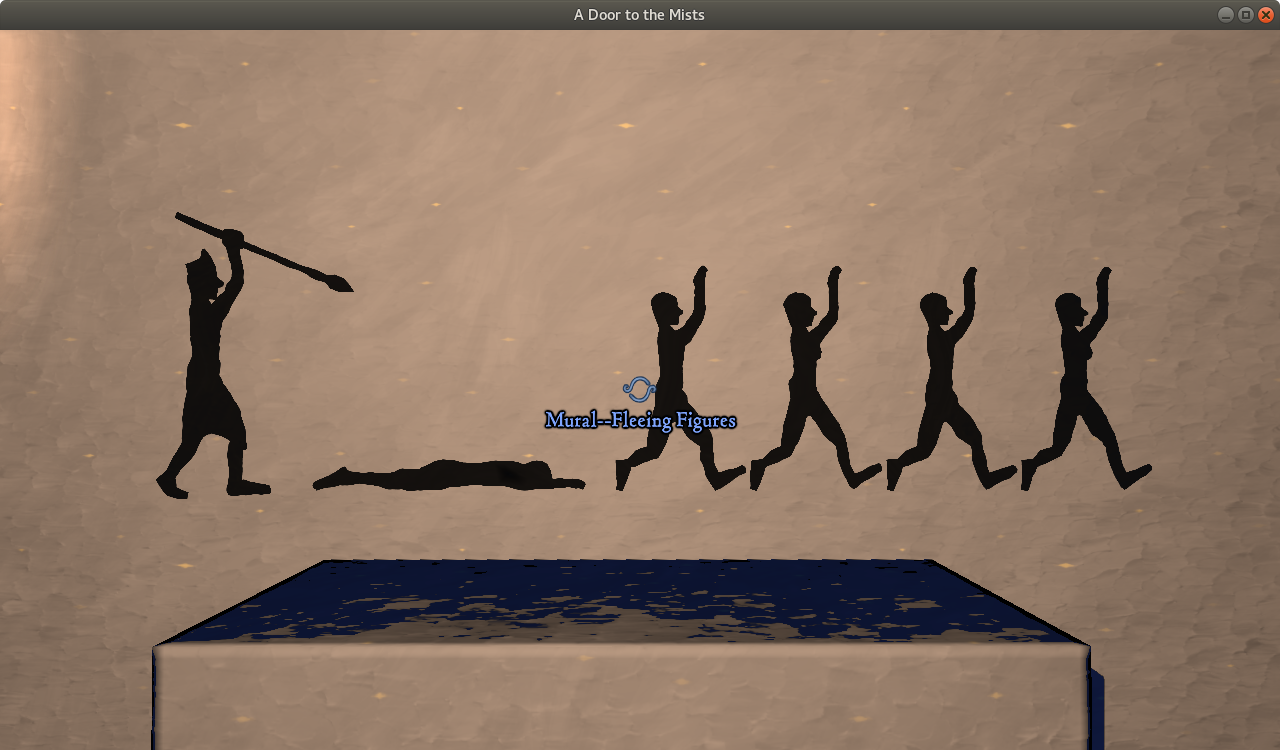 The week just past was again a bit slow--in part for a new reason, and one that I intend to go into below. However, some things did get done!

As shown above, murals were a part of the work of the week just past.

I've previously shown one mural, I believe; that mural itself saw some polish: 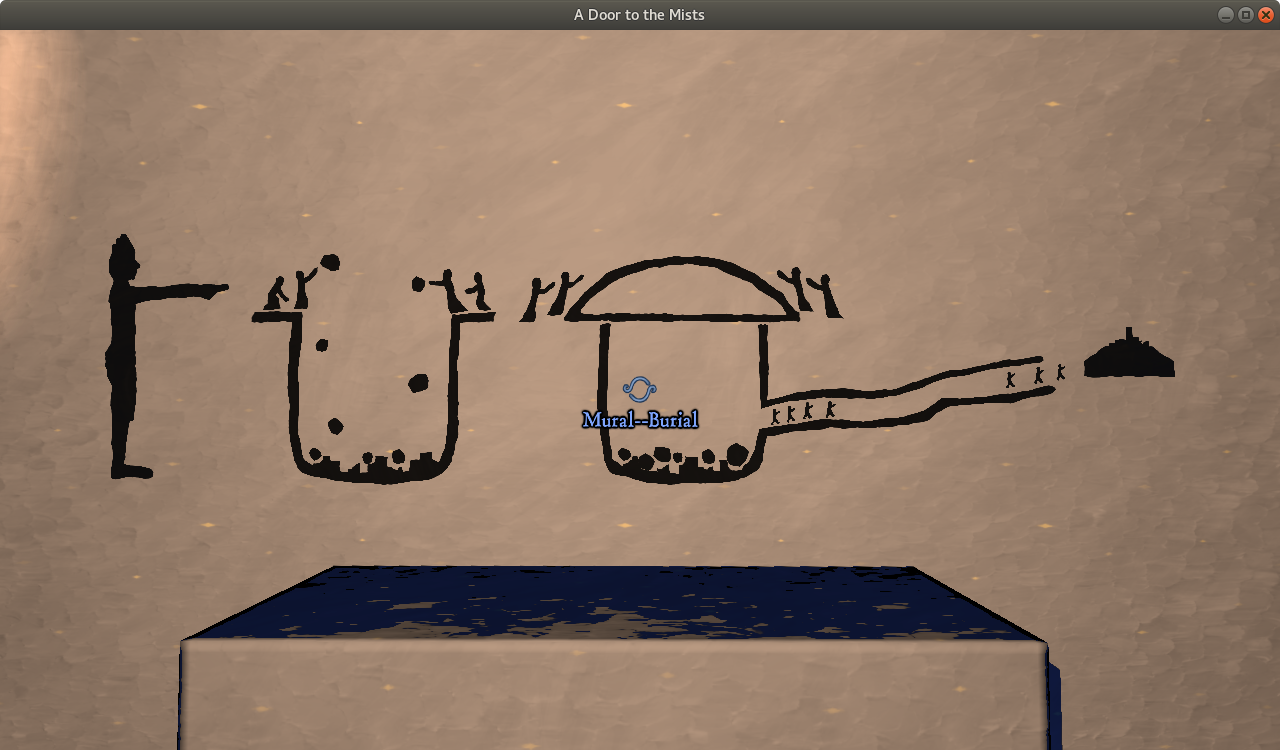 Further--and as shown in the main screenshot above--other murals were begun, and indeed finished I believe, in the week just past. Two, to be precise: the one above, and one more: 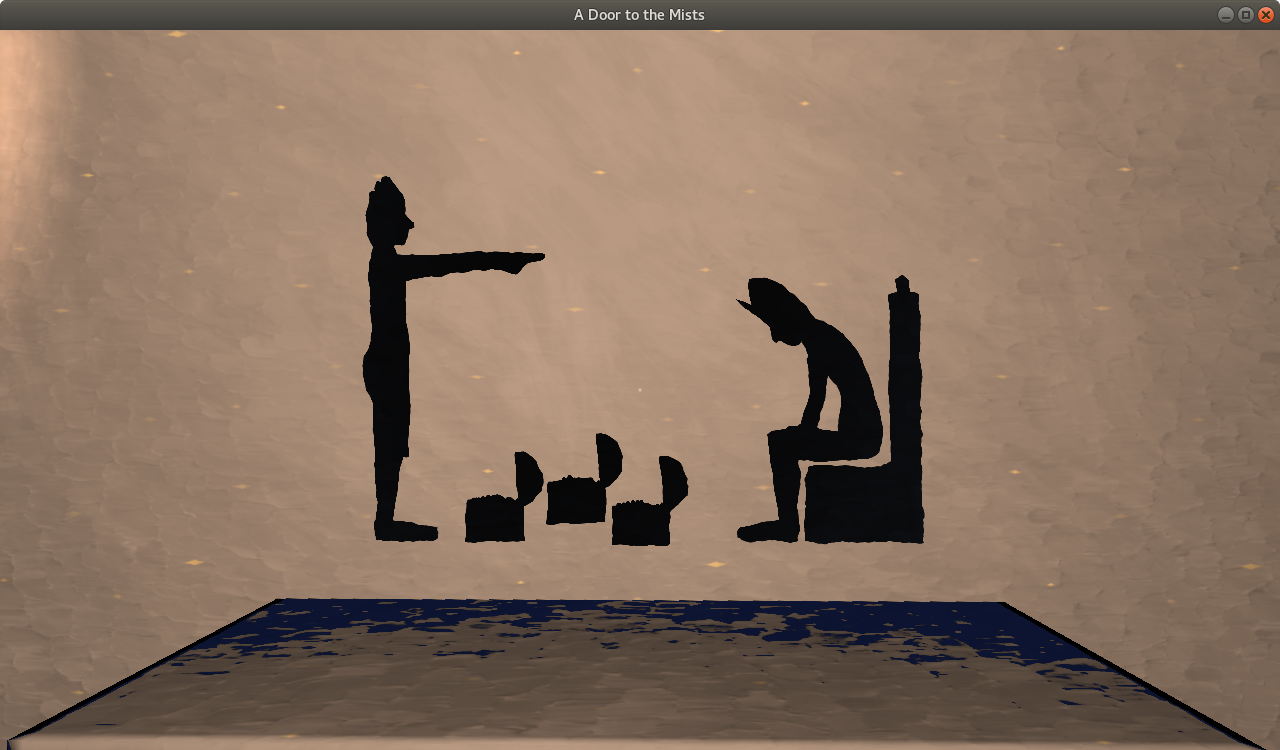 Each of these murals shows some achievement of the king who lies interred in the tomb that bears them. And indeed, the player can now examine the various sections of those murals in order to learn about them. Further, a conclusion now follows the examination of all sections of a given mural.

Specifically, in the week just past I added examinable colliders to the level at those sections, put in place logic to handle the drawing of the conclusions, and wrote text-strings for all.

There was, once, a fourth mural. Only part of it remains now, the rest seemingly destroyed; there's little to glean here, save that someone seems to have disapproved on something that this king did: 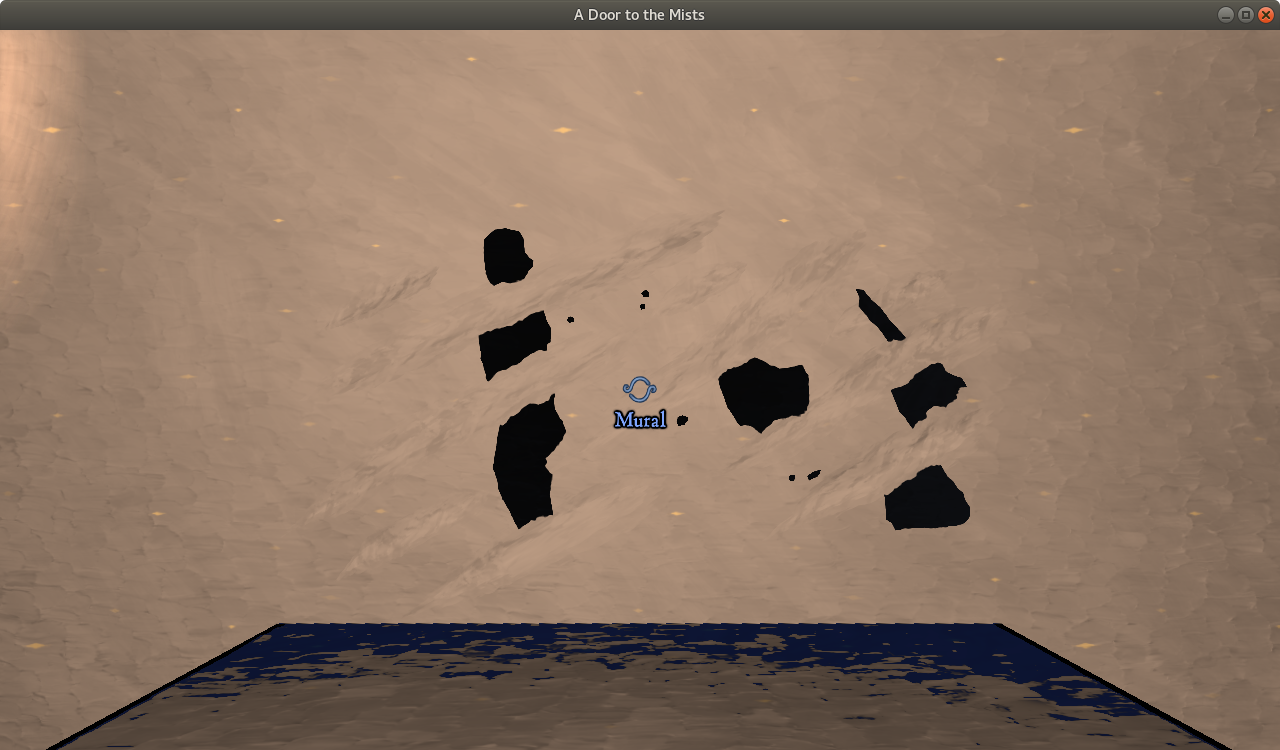 This fourth mural likewise has its examinable collider and text-string.

And indeed, furthering that thought of some disapproval against the king is a bit of graffiti found below said mural; a slur against the king. That, however, has only logic elements and text-strings in place, and thus is not ready to show!

Remaining with level-geometry, I also fixed a minor issue with the footstep-sounds assigned to one region of the level.

I believe that in last week's blog post I mentioned some breakable pots. In the week just past, then, I added a sound for the placement of said pots (as they're carriable).

To what end are these pots included in the level? Well, that touches on some spoilers, so beware!

You see, as I believe was mentioned beyond a spoiler-warning in a previous blog-post, the statues found in this level are not entirely inanimate.

Indeed, one condition under which they wake, at least, is should someone steal from the tomb. Steal something like, say, the death-crown perched on the dead king's forehead...

They're undefeatable by the player, and quick enough that there's little chance of evading them in the tight spaces of the tomb. So how might one get out with the prize?

The answer is to slow them down!

Here below, then, is a video of these things--albeit a video of how not to do it, and the consequences of running afoul of these redoubtable guardians:

A part of the work of the week just past went into those guardians, too: specifically, I put in place some likely-final values for their interactions with the pots.

So, I mentioned above that there was a new reason for this week having been a bit slow.

With continued declinations or silence from publishers, I'm starting to look to the possibility that A Door to the Mists may not come to be published. And at the current rate of progress, I fear that, lacking funding and additional level-builders, it will take rather longer to complete than seems wise. As a result, should I not find publisher support, I will likely cancel the project.

For one, this prospect has, I think, dispirited me a little. I haven't given up, but my motivation has ebbed somewhat.

However, perhaps more saliently, I'm looking ahead: I'm preparing for the possibility of pivoting.

Specifically, I've picked up once again a project that I had previously set aside, one that I think might be quicker to make overall, and a little more marketable.

(And also one that I'm excited about--it's a project that I'd wanted to return to in some capacity anyway, as I recall!)

To this end, the work-day has been split in two: the first period is given to A Door to the Mists, and the second to this other game.

I don't want to say too much just yet of this nascent game, and this blog is for A Door to the Mists after all. However, in short, it's a fantasy take on a particular form of the top-down space-explorer-and-shooter.