How the hacking mechanic will play into the game, and a first look at the relevant interface.

For the past several weeks development has mostly focused on what can be considered the "other half" of the game. Aside from exploring the map, fighting robots, and re-building yourself, an entirely new component unseen in the 7DRL prototype is now being integrated into the game: Hacking. (I briefly touched upon hacking earlier with the introduction of machines.)

This is both wonderful and scary at the same time. Wonderful because there will be a whole range of new ways to interact with the world, and scary because it can be a pretty major part of the game but was never prototyped!

This is a mockup of the hacking interface as it could appear over the map: 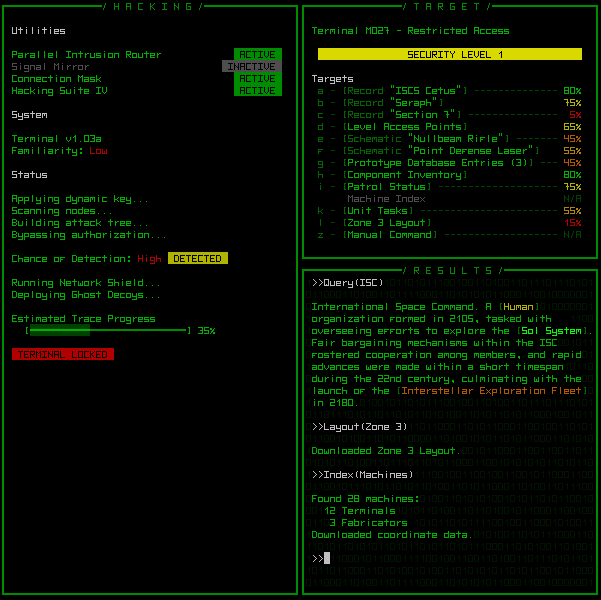 Left: First console to appear, showing general information and the progress of the hack. Top-right: List of known targets to hack from the current machine. Bottom-right: Commands entered and their results.

So where does hacking fit into the game?

Firstly, most of the story is presented through data files accessible at terminals, essentially making it optional for those who care to know what the heck is going on (trust me, when you find the cave systems, or stumble across hidden research labs, you'll want to know at least a little of what's going on).

From a gameplay perspective, hacking opens up more strategic options through the various functions machines are capable of. Everything they can do is closely integrated with other parts of the game. In general machines enable you to gather information, manipulate the environment, and provide tools to augment your capabilities.

You can do as much, or as little, hacking as you want depending on your needs and style. Following posts will explore the interface and mechanics in more detail. (I've tried to keep the system simple, but it turns out there really is still a lot of detail in there...)

Preview of animations to come:

Basic hacking status info on connecting to a terminal.

This is really interesting - love how the linguistics influence the animation

Thanks, a good UI is about more than just putting words on the screen--there are so many ways we should emphasize and de-emphasize certain pieces of information to improve the experience :)