Following on from the last news post here are several new Japanese tanks based on the Type 95 Ha-Go.

Following on from the last news post here are several new Japanese tanks based on the Type 95 Ha-Go. 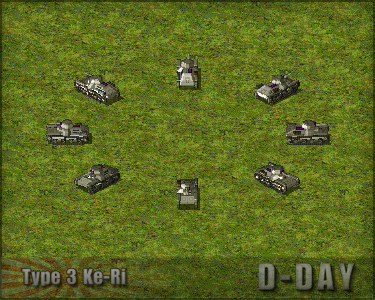 The Type 3 Ke-Ri was a upgrade of the Type 95 Ha-Go replacing the Type 98 37mm with a Type 97 57mm. During testing the larger 57mm cannon proved difficult to use in the Ke-Ri's small turret so work on the design was canceled.

Note:
There is some confusion about what turret the Type 3 Ke-Ri used, some sources state that it used the standard Type 95 Ha-Go turret and others show something similar to the turret of the Type 98 Ke-Ni. For now I've used the later design for ease of recognition but it might be changed in the future once a more reliable source has been found. 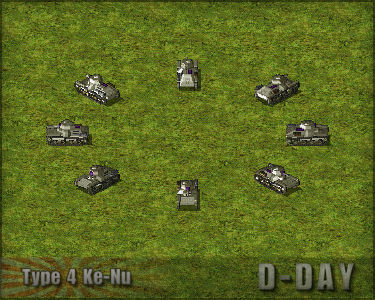 Near the end of the war several programs were launched to upgrade or replace the aging Type 95 Ha-Go in an effort to combat the growing allied armour threat. One of these was the Type 4 Ke-Nu which replaced the standard Ha-Go turret with the turret from the Type 97 Chi-Ha which became surplus after it was upgraded to the Type 97 Shinhoto. One hundred were converted before the end of the war with the majority of them stationed of the home islands, a few were used in Korea & Manchukuo were they fought Soviet troops in 1945, one of them was captured and now resides in Kubinka Tank Museum. 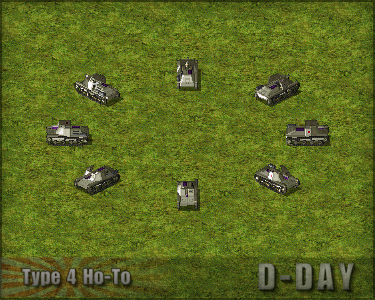 The Type 4 Ho-To was an experimental self propelled gun based on the Type 95 Ha-Go, the turret was removed and replaced with an open structure fitted with a Type 38 120mm Howitzer. A single prototype was built in 1944 and tested but the results of the testing or the prototype's fate after the war is unknown.

you can barely recognise anything, its all so small.
from an artistic point i have to say well done, but for gameplay....errmm... dont you think it is going to be hard to recognise what tank you are selecting?

Yes it can be difficult to tell some units apart but that's just the way they were designed. I am confined to the limits of historical accuracy.

it was more something about the low amount of pixels per unit caused by the engine. but that's the limitations you have to live with!
I will say again, they are well made tanks. good job.