Guy is coming to an end. This June you guys will be able to play what we've put plenty of our efforts. How about some news to warm up things a little bit?

Hey guys, how are you doing? Hope you're all well.

Well, we are a few weeks before (finally) releasing Guy. For those who want a taste of the game before acquiring it, we will make a free-to-play demo available. While that day does not come, we will show a bit of what we've been working on.

For the past few days I've been focusing on making the game prettier, as mentioned earlier. Not only that, but also making the game less aggressive to the eyes. Here are some screenshots showing some of the improvements made so far. 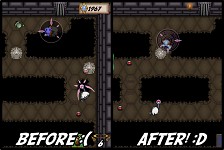 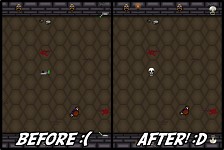 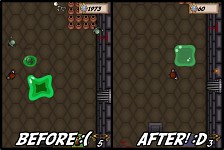 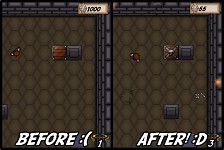 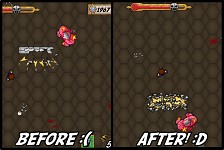 But those aren't the only changes, oh no. There are some subtle changes that will improve the player immersion by giving better visual feedback of what is going on. Plus, did you notice the news preview image? Well, that is one of our ending screens. Neat, huh? We've decided to make extended versions of the same ending. Based on a certain criteria you will get the full ending or not. And no, I won't tell you which criteria that is.

But thats enough about what I am doing. Tadeu got quite a lot of work on his hands too. Tadeu is improving our tutorial stage, making it smoother and shorter, taking you faster to the actual game. This way, new players won't be bored. At the same time we will be able to introduce all the game's basic features, such as weapon collision and room dynamics. Plus, the game's learning curve is being improved, making a smooth curve that keeps growing until the game's very end. Oh, and we're almost finished with the bosses, we are just missing one!

Hope you guys are thrilled as we are! Until the next time!

Murica! I hope it goes well for you guys

Thanks for the support! :)

Guy vs The Wicked and Nefarious Land Adventure
Related Engines