GUNSLINGER mod is in ModDB now. In this article, we are going to review our recent updates.

Hello, ModDB community!
You might know about our mod before, so now GUNSLINGER mod is officially registered in mods database.

If you're new to GUNSLINGER mod, then do four things:

Okay, now we're going to review what we have done so far. We're not going to review anything, so this article will be "tl;dr-safe" and minimum as possible. If you want to know more, you can always check the links at the end of the article.

WEAPONS
We finished making animations for pistols and some shotguns. Some of them are compiled and in-game already. You can check our progress on this weapon list and YouTube channel.

All weapons and items are animated and compiled by STRIFER. Some of the 3D assets (models, textures, sounds) are made by GUNSLINGER Team members Mr. Rifleman and SAM61. Other 3D assets were made by their respective authors (it will be stated who made model and texture in every description of video, image).

Most recent finished weapon is TOZ-66:


We decided to make the new model for P220, so it will be next-gen looking just like other models in the mod. Work in progress, picture is clickable.

UPGRADE
Check this video to see the upgrade tree of TOZ-34 and how GUNSLINGER mod's upgrade system works:


Attachable laser sights and flashlights aren't shown there, but they're implemented already. Check these screenshots:

Models and textures by SAM61. 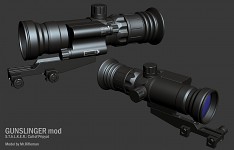 ITEMS
Detectors, binoculars, bolt, knife, grenades, vodka, hand-held flashlight, med kits and other medical/consumable items were animated and compiled. Detector animations are synced with every pistol, bolt, knife, and grenades. As always - link to our YouTube channel above.

Most recent update is about bandages.

OTHER STUFF
Headlamp switching on/off is animated now. Speaking of flashlights... you can have 3 active flashlights at the same time: headlamp, hand-held and attachment one (like under-barrel for pistol). There's going to be the article called "flashlights" where you can compare every flashlight and see which one would be best to use in the specific situation.

It's not recent update, but we think it's worth to mention it again. This update doesn't feature weapon-related mod, but it's something what Sin! (GUNSLINGER Team, Programmer) wanted to make. Controller is now deadly as hell. We are going to post an article soon about the ways to be safe.


And that's it for now. Yes, some features aren't mentioned. We are going to post separated articles about every type of feature in future, so you can understand them. Right now, all features are explained in Russian only. They're going to be translated soon. And NO, we aren't using source code to implement new features.

OMG i watching this mod from the beginning ! I can believe it nearly comeout ^^

I have been watching this mod over a year and I have to say it's my favorite stalker mod.

So excited to play it!
Are you planning to make the AI better? If not, will mods that only modify the AI compatible with this one? Or stuff like Atmosfear and such?

This is very badass please continoue

Wow, amazing animations, all of them! Looking forward to seeing more.
Hope there'll be add-ons that improve on other aspects of the game as well. Currently playing MISERY and loving it. With this in addition I'd never leave my PC.