This update will is about one of the two sub factions for the Misty Mountains, Gundabad.

Gundabad is an ancient Dwarven stronghold that is taken by the Mountain Orcs for their main base of operations and preparations for war against them. The Gundabad Orcs are known for their brutality and great strenght for they are the most pure breed of Orcs in Middle-Earth. Their King and war leader, Azog the Defiler, is the most vicious and thoughest of all their race. He and his son, Bolg of the North, rule over the Mountains with an iron fist.Gundabad is a sub-faction of the Misty Mountains, along with the Goblin-Town. But in contrast to weaker Goblin units, Gundabad brings strong Orc Hunter units, heavy Battle Orcs and ferocious Gundabad Wargs.

Gundabad is more melee oriented and relies on thoughness and raw strenght of its infantry units.
Basic Units of Gundabad are the Hunter Orcs, which are divided in three classes: Gundabad Warriors, Archers and Spearmen. 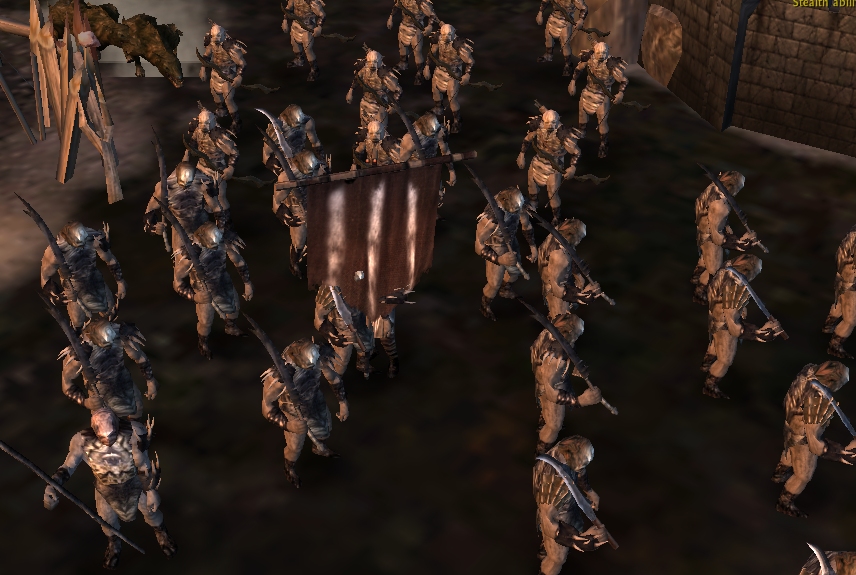 Heavy Units for Gundabad are Battle Orcs, divided in Gundabad Swordsmen and Gundabad Pikemen. They are fully upgradable and one of the thoufhest units in the game.Unlike the rest of the Heavy Units, they are limited to 8 battalions, instead of 5. 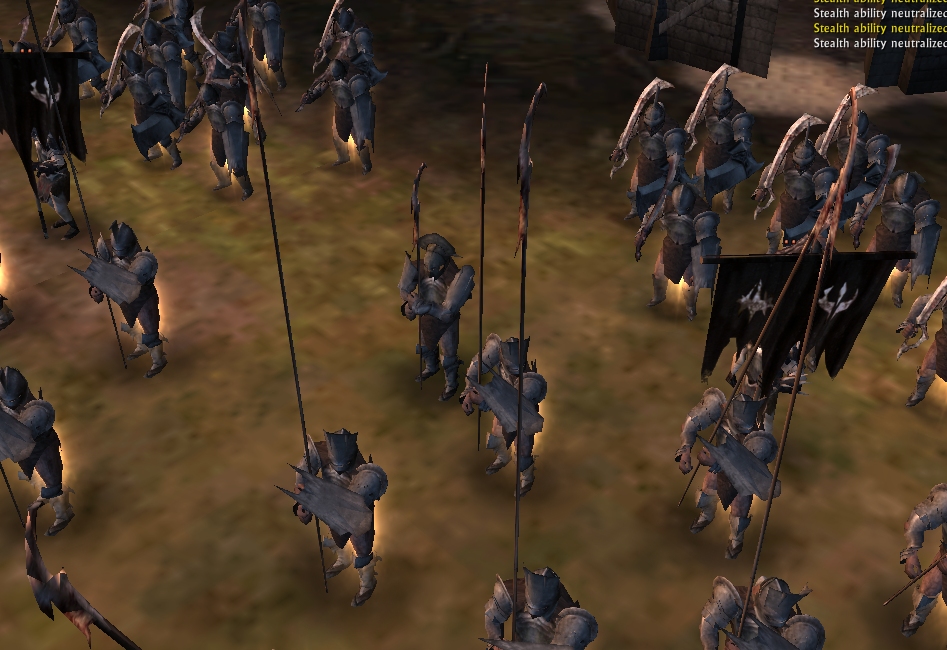 Gundabad Warg Riders serve as Cavalry for Gundabad, very quick and vicious against Infantry in close combat, but they lack in good trample damage. Along with riders, Warg Scouts serve as the basic infantry unit for quick map exploring and taking down enemy Pikemen. 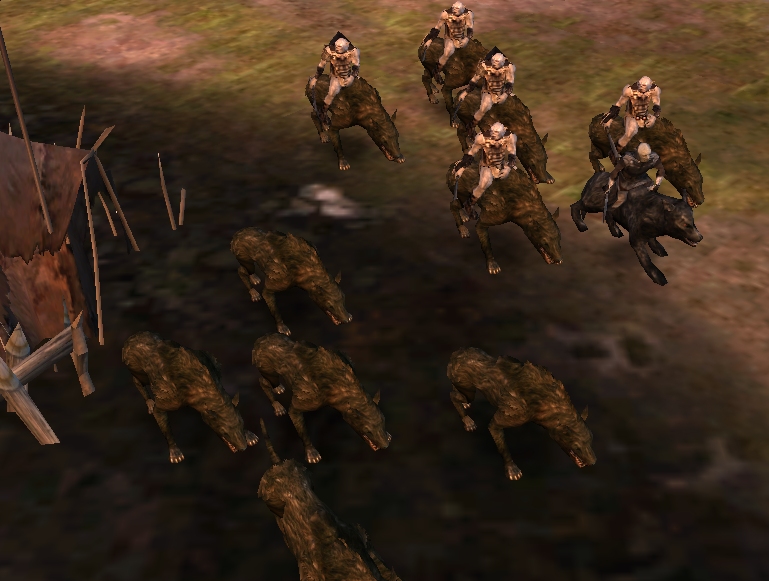 Besides Mountain Giants, who are siege unit, the role of supporting siege units are Gundabad Battle Trolls. They are not as strong as their Mordor breed, but they serve their purpose. They can be upgraded with armor in order to prolong their usage on the battlefield. 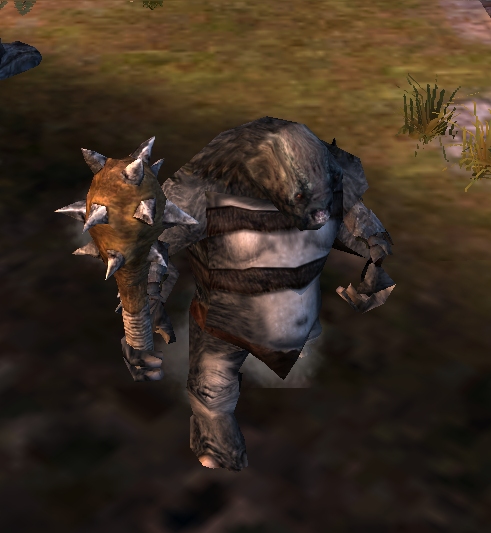 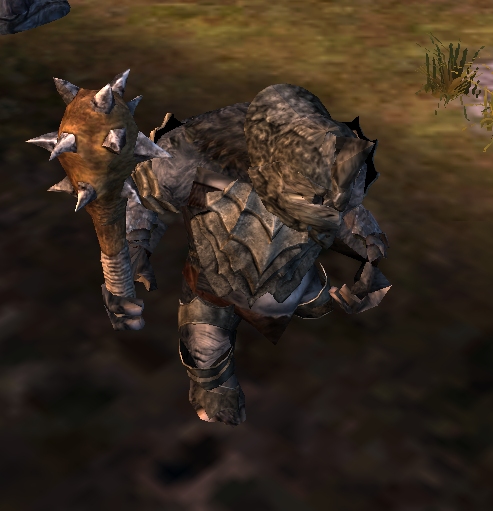 Besides Azog and Bolg, Gundabad has three new heroes.

Yazneg, Azog's Lieutenant, is the leader of the Warg Riders and Scouts.
Fimbul the Hunter is a stealthed assasin and provides bonus to Hunter Orcs.
Narzug is a stealthed archer who provides support for archers. 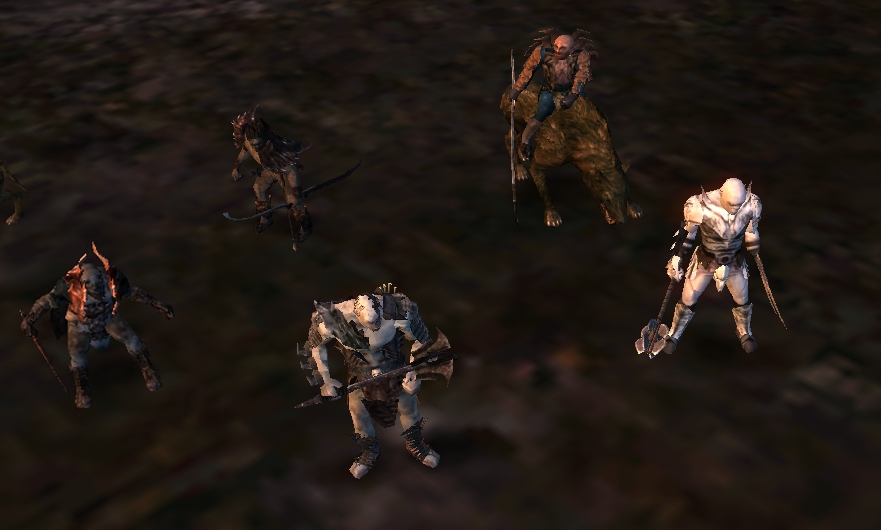 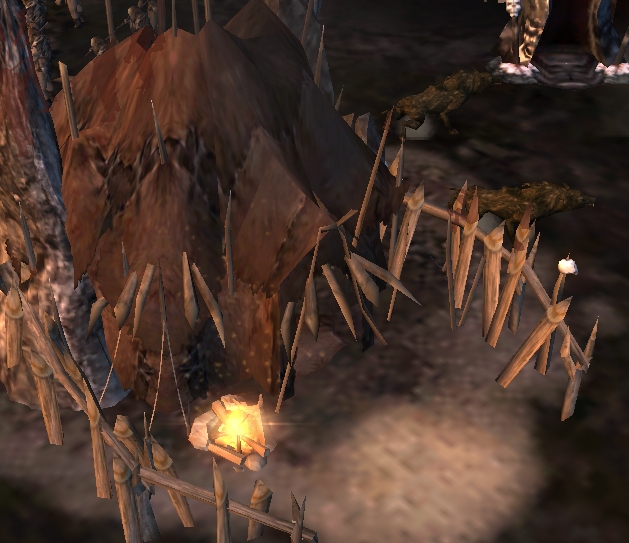 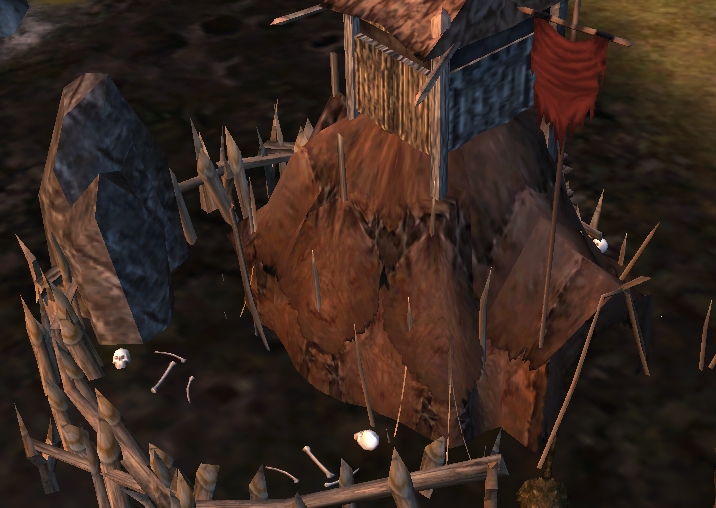 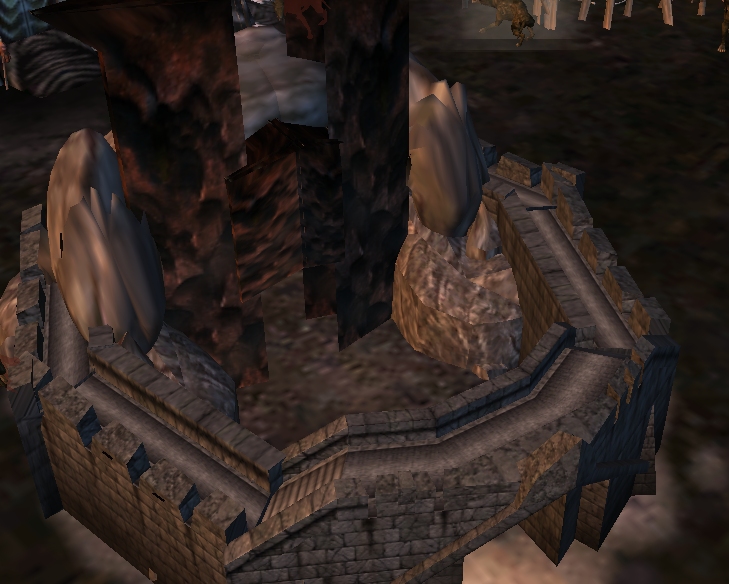 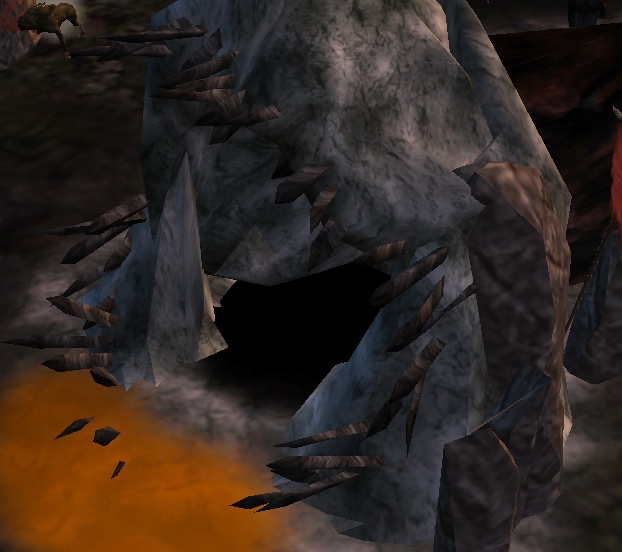 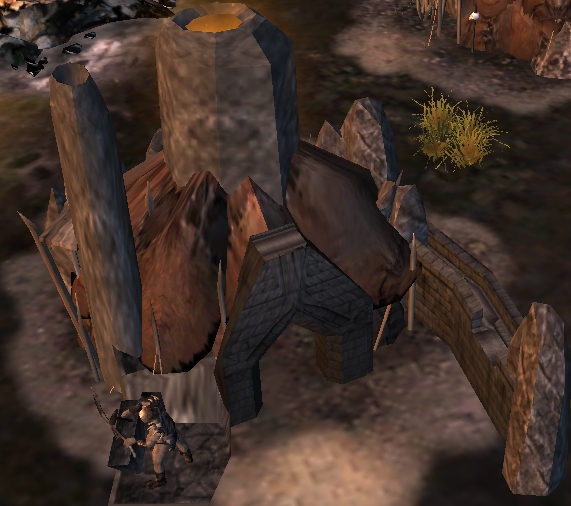 Fortress also got the new look and upgrades 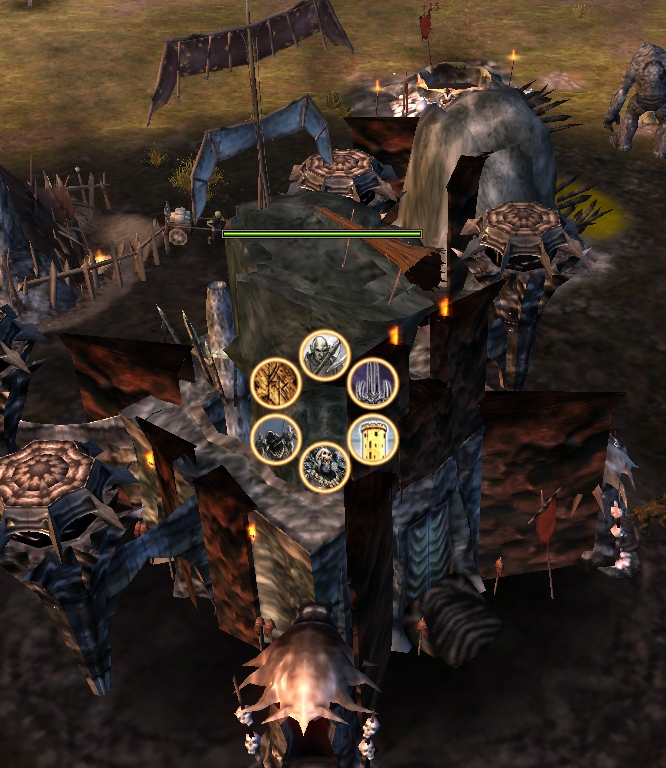 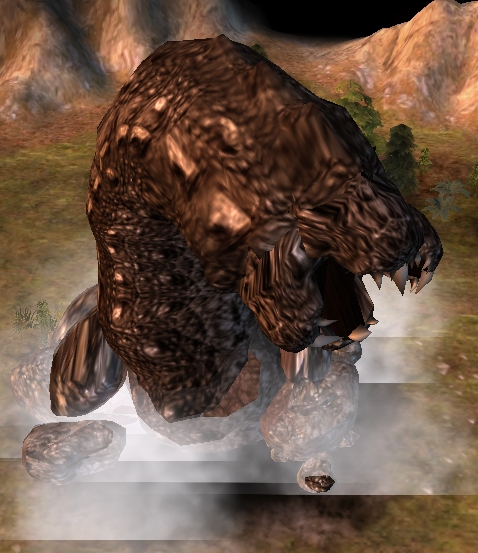 We released the video on mod's channel showing gameplay with Gundabad. Gundabad is still in testing phase so if you notice some bug, please report

I have no words to describe this... except 'This is just spectacular!!!' =D
Seriously, the Gundabad Olog-hai, the fortress with the war flags, the Were-worms, and everything else, in the mod altogether, is just SPECTACULAR!
Can't wait till the release!

Gundabad great kingdom that is, we must hunt these dwarfs.

if you zoom in on the top right corner of the fortress pic you'll see a STONE GIANT!!!!! AHHH

Can't wait to use the worm :D

Just gotta ask, but why are the troops limited?:/
it would be awesome to create an epic army like in the movie, especially when the units looks so cool, also i dont see the value in having them limited, if its such a high limit like 8

And secondly, and this is just a suggestion, no disrespect^^ I wouldnt use the Isengard shields for the Gundabad units, the shield that some of them have looks awesome, why not use it for all of them? And spearmen dont usually have spears?

But anyways the mod looks great, it just looks insane with all these new units!! And even earth eaters! Thank you for this epic mod!:)

troops are limited to prevent spamming, not every are limited, only heavy and elite. Also, Battle Orcs are limited to 8 because there are only two types of them and i also wanted for them to be more than Uruk-Hai.
I created the shields from the movie but i also added Uruk shield, though i didnt quite changed it to look like Gundabad shileld, but that will be fixed. Also, Gundabad Spearmen carry spears, spears are shorter than pikes, Gundabad Pikemen carry pikes... :)

Oh sorry meant to say "spearmen dont usually have shields" lol^^
But if the shields they have will be fixed, thats great!
And the spears (or pikes^^) looks great, exactly like in the movie!

But usually its not the heavy units that get spammed, if im not mistaken:)
And cant they be more expensive, that would prevent spam.
Because i sometimes create large battles between troops with friends, so we create really large armies and then battle to 0 command points, and this wont be possible with limits:(
But if there could be a mod or something without limits or another solution that would be awesome! (in edain mod you can pick a game mode, maybe there could be a game mode with no limits and more cp or something?)

And thanks for the reply^^

MorguLord : Please when will be download full mod th3age? with gundabad and goblin town and others

Your updates for the upcoming new version of the mod look promising! Any chance of another update? It has been nearly two months...

i have a trouble installing it, in fact it is the first time i saw this mod.. so can someone tell me how to install it?

I've finally found time for watching the whole Gundabad video, where is Lorien and other things as well.
And I really had to rewrite my review and give to BOTTA number ten, cause it's so promising and really cool. And mainly - it's not over yet. :o)

Awesome mod! you should add the catapults onto the trolls of Gundabad as an upgrade, it would be so cool!