Guilty Gear XX Bloodshed version 1.0 has been released for Mugen 1.1. Prepare for fast paced action and buckets of blood. Everything you need to get in on the action is included with this download. 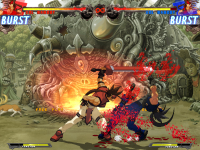 Screenpack Features:
Borrowed the intro, assets, and inspiration from the GGXrd Screenpack made by MustardSeedComics and Ralfab.
Custom Main Menu, Options, Character Select, VS, Victory, and Gameover Screens with a lot of moving parts.
GGXrd Life bar, Fight art, and power bar created by Rayzo and edited by me. 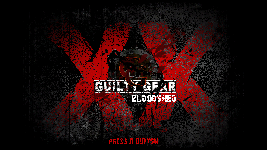 This is the final frame of the intro. The "Press a Button" flashes on and off until you actually press a button. Then you are taken to the main menu screen. 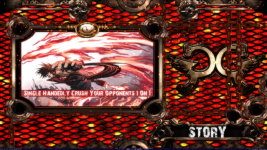 All of the gears and chains are animated except for the gears attached to the top and bottom metal borders. The lava also flows to the left behind the grating. As you select different game modes the picture on the monitor will change according to what you have selected. 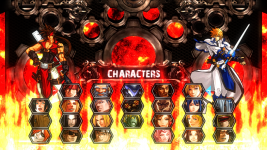 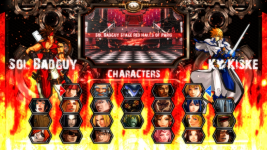 Every gear is animated except for the big gear in the center of the screen and the gears attached to the top metal border. The lava flows to the right and the fire is of course animated. When it's time to select a stage a monitor will appear and it will display the stage you currently have selected. 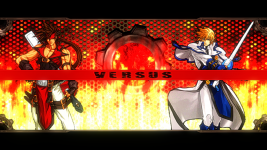 The gears in the background rotate and the fire is animated. Huge metal doors open up to reveal all of this as the VS screen is activated. The lava flows to the right. 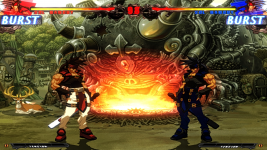 Stages:
Mostly typical stages for GGXX characters downloaded from The Mugen Archive with added FX such as fog or smoke and also lighting overlays.
Edited some stages to accompany Mugen's limitations such as a lack of having water effects when characters are walking in water.
Used 2 edited stages from GGI for Testament and the Robo-Ky Ambush Mini Game.
All stages were edited to allow the Mugen 1.1 zoom feature to work properly.

Music Features:
All music for stages and the screenpack are included and may come from GGX, GGXX, GGI, or GGXrd.

Character Roster:
All characters by muteki have been stripped of their ridiculously hard AI and use the default Mugen difficulty system.
All characters come from muteki except for Robo-Ky ( 1 on 1 version ) who comes from Ukege and Leopaldon who was made by Kurogane.
Robo-ky was edited to include all features from muteki's characters.
Order Sol is a secret character on the character select screen.

Enjoy this creation and feel free to ask questions and give feedback. Expect future updates to further make this game even more gorey and gruesome.